From the pandemic front line, a plea for help engineers a safety bubble

As concerns grow about airborne transmission of COVID-19 and high infection rates amongst healthcare workers, a new product designed to isolate coronavirus patients from carers is being trialled in Victoria. Else Kennedy reports. 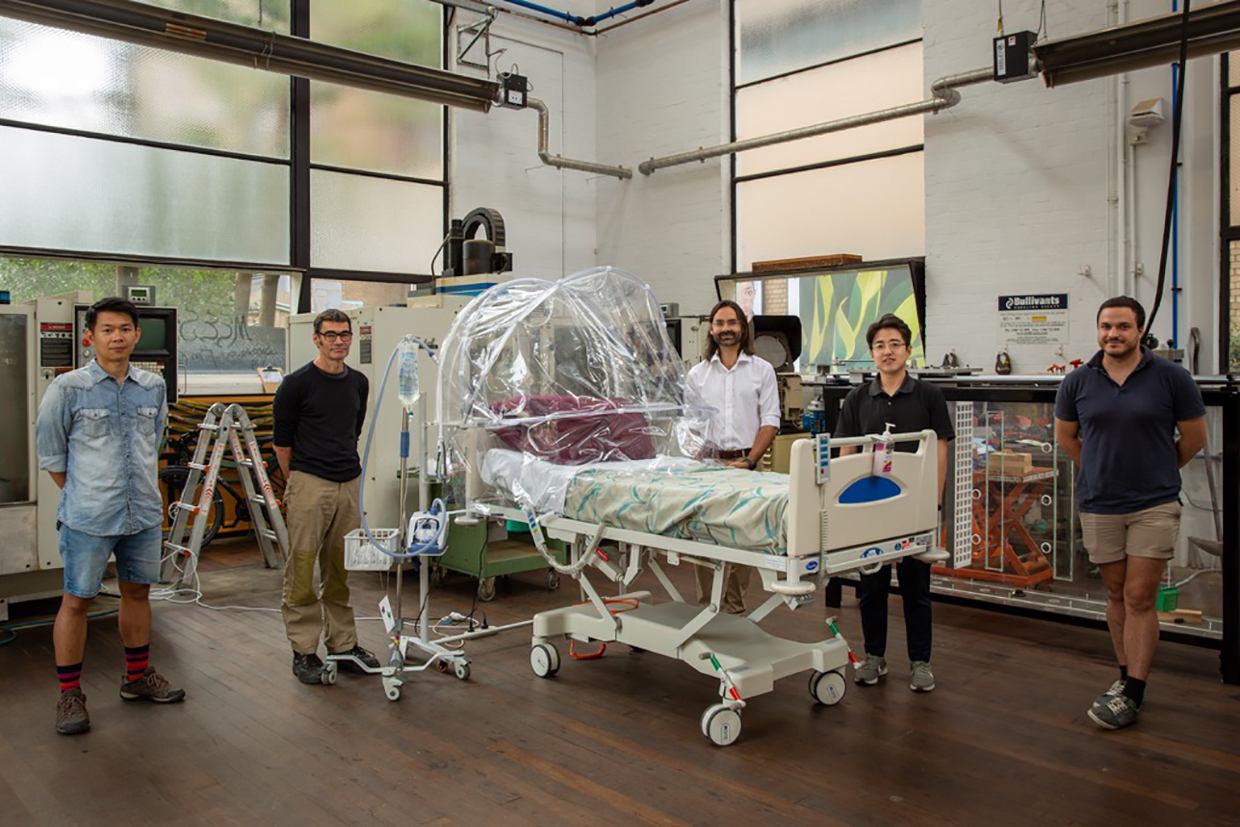 Dr Jason Monty (pictured centre) with his University of Melbourne team of engineers and prototype ventilation hood, which is being trialled in nine Victorian hospitals and one in the Northern Territory. Photo: supplied.

Back in March, as Australian hospitals confronted the first wave of the new coronavirus pandemic, the head of the University of Melbourne’s mechanical engineering department was taken aback by a call for help from an intensive care specialist in Melbourne’s west.

“I’d only seen infectious disease-type pandemic events in movies, like most of us,” recalls engineer Dr Jason Monty, an air circulation expert. “I just assumed that there were these tent-like plastic things that they would be able to deploy (for infectious patients).

“But like most things in the world, when something happens, and you think it might be like a movie, it’s not,” he says. “We don’t have any of those controls.” Dr Monty (left) and his team worked 18-hour days to produce a prototype “hood” within 48 hours of being approached by Dr McGain. Photo: supplied.

Concerned about the potential risks of aerosol spread of the virus, Western Health intensive care specialist Dr Forbes McGain asked Dr Monty if his team could design a canopy that could be draped over hospital beds to isolate coronavirus patients and the air they breathe, protecting both patients and their carers.

Within 48 hours of the question being asked, working almost around the clock – “We worked until about midnight and we were back at it again at 6am the next day” – Dr Monty’s team had developed a prototype.

Now, as questions rage around the high rates of infection among health workers in Victoria and evidence grows around the risks of aerosol transmission, Dr McGain’s concerns look prescient. And Dr Monty’s prototype has yielded a timely trial rolling out locally designed and produced ventilation hoods to nine Victorian hospitals and one in the Northern Territory.

Dr McGain is convinced that the hoods are making a difference on his wards at Western Health in Sunshine, where the trial kicked off. His team has cared for 45 coronavirus patients in intensive care over the past three months, 90 percent of them inside ventilation hoods. The very low infection rate of COVID-19 in his team was “very different to even other wards in our own hospital,” said Dr McGain.

“It’s not proof definitive, but I’ve been discussing it with some of my colleagues, and they all they are all convinced that this bloody hood works.”

Dr McGain says he commissioned the production of the ventilation hoods for ICU patients now being trialled at Western Health and elsewhere because “the evidence (for airborne spread) is becoming stronger”.

He’s referring to escalating concerns around the virus’ capacity to linger and spread through the air, as distinct from the well recognised transmission path via droplets spread through sneezing, coughing, touch and close contact.

Early last month the World Health Organisation acknowledged there was growing evidence COVID-19 could be transmitted by small airborne particles, after more than 230 scientists wrote an open letter appealing to health authorities to recognise the potential for airborne spread.

Health authorities are facing increasing pressure to conduct immediate risk assessments of hospitals, “particularly in relation to aerosol transmission and key aspects of respiratory protection”, as the Australian Society of Anaethesists demanded this week.

Meanwhile a new Victorian Government analysis has revealed that about “70 to 80 per cent” of the almost 2800 healthcare staff who have tested positive for COVID-19 caught it at work.

It also identified older and less effective hospital ventilation systems among the causes of high healthcare worker infection rates, alongside cases being “cohorted” in the same clinical space, contact between health workers in areas like tea and break rooms, gaps in putting on and taking off PPE, and movement of staff between facilities.

The findings prompted the Victorian Government to announce on Tuesday that it would undertake a COVID aerosol hotspot analysis, which will examine tiny virus particles in clinical spaces.

“It beggars belief that we’re only doing this now,” Dr Michelle Ananda-Rajah, an infectious disease expert, told The Citizen.

“We really urgently need occupational health and safety experts through these environments doing a risk assessment and making some recommendations that are actually then implemented and implemented soon,” she said.

“PPE is the last line of defence.”

Western Health’s Dr McGain recalls his first instinct as coronavirus patients began to arrive in his ward early this year was to keep them isolated from staff and other patients, but he soon realised “there’s no way that we’re ever going to have enough negative pressure rooms (sealed rooms that prevent airborne diseases escaping)”.

Hence the collaboration between Dr McGain and Dr Monty to create ventilation hoods that would effectively provide a portable negative pressure room for each COVID 19-positive patient, but be “relatively cheap and easily set up” using commercially available plastic sheeting and local manufacturers. Dr Monty (pictured right) with Dr Craig French, director of the ICU at Western Health, where the hoods are being used in a clinical trial. Photo: supplied.

The plastic dome of the hood is large enough to contain a ventilator and other medical equipment, and creates a physical barrier between the patient and healthcare workers. It isn’t completely sealed, but “reduces the risk of aerosolized particles or droplets hitting the healthcare worker” says Dr Monty.

“It’s not a solution, it’s a control to reduce risk,” he says.

Dr Monty says that there are big problems with ventilation inside many Victorian hospitals, including air-conditioning systems that push moving air from one room to another.

The ventilation systems in some hospitals remove air from the Intensive Care Unit, where COVID-19-positive patients are being cared for, and eject it into adjacent rooms, he says.

“I’ve been into the hot COVID wards (wards with COVID-19-positive patients),” he says. “A lot of the (air) flow comes straight out into the corridors.”

Some hospitals were turning air conditioning up higher to increase ventilation, but that might not be enough, he argues. “If you’ve got poor circulation in a room, you’re always going to have pockets of the room where virus accumulates and it’s dangerous for healthcare workers,” says Dr Monty.

Achieving good ventilation in hospitals “would need massive redesigns and potentially it may not be possible to do it in an energy efficient way”.

The challenge for the healthcare system was that “hospital engineers aren’t employed to deal with the virus. They’re there to make the hospital work properly, as it is.

“They’re not trained or equipped in terms of resources to make large scale changes to the hospital. Nobody really is.”

Professor Raina MacIntyre, head of the biosecurity program at the Kirby Institute, echoed his concerns, telling The Citizen “the occupational health and safety of health workers has been left in the hands of infection control experts, who do not have knowledge of ventilation or airflow”.

A spokesperson for the Victorian Department of Health and Human Services said Victorian hospitals “have sufficient ventilation systems in place to reduce viruses from spreading between rooms and keep staff, patients and visitors safe”.

The spokesperson said over the past four months, Victorian hospitals and their specialist engineers had built and commissioned new wards for coronavirus patients, installed additional liquid oxygen supplies for clinical ventilation and installed negative pressure zones to separate COVID and non-COVID patients. They have also modified heating, ventilation and air-conditioning systems to manage airflows within facilities.

Dr Monty, together with Dr McGain, has enlisted two Melbourne manufacturing companies to produce ventilation hoods for the clinical trial. Evan Evans, a company which normally produces flags, signs and marquees, will build the plastic dome, and fan and ducting manufacturer Westerflex will produce the ventilation components.

“This is the simplest solution to transmission in the hospital that you can think of,” says Dr Monty. “It’s a plastic sheet around somebody with an exhaust fan.”

The hoods are awaiting approval from the Therapeutic Good Administration. Once that is in place the team hope to scale up their manufacture to make them available nationally, possibly as soon as early October.

Meanwhile a similar solution, dubbed the Care Cube, developed by the University of NSW in partnership with United States-based organisations OtherLab, and the Centers for Disease Control and Prevention (CDC) is currently in production in the US and will shortly be released in Australia. Help wanted: Not enough of it getting to those in dementia-driven decline