Seismic scenes of protest playing out in Hong Kong have reverberated deep and wide. On a chilly Melbourne evening, tensions erupted outside the State Library. Wing Kuang and Shujing Cai provide an inside account of what happened that night, and its fallout.

Words, video and pictures by Wing Kuang
and Shujing Cai

Dusk on a winter’s night – Friday, 16 August. As office workers clocked off for the week and vanished into Melbourne Central for their commute home, members of Melbourne’s Hong Kong diaspora were gathering on the La Trobe Street side of the city’s traditional protest space, the State Library.

A couple of them held aloft the yellow umbrellas that have become the symbol of the democracy movement in their homeland. They had come for a rally organised by the recently founded Victoria Hong Kong Tertiary Student Association (VHKTSA).

On the other side of the library forecourt, a group of mainland Chinese students raised the Chinese national flag.

“One China!” the pro-Beijing camp shouted in English. 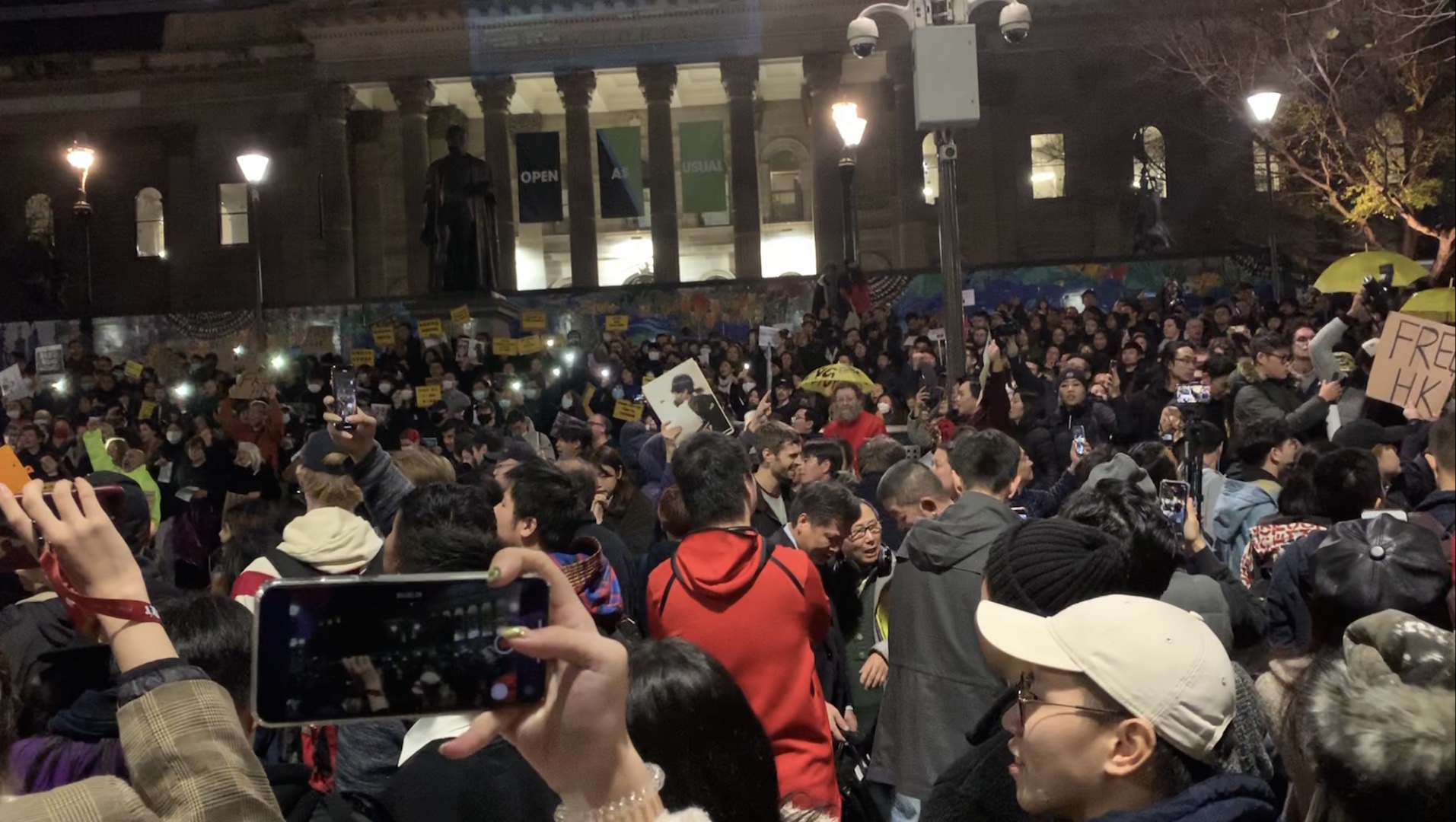 Over the next hour, tensions would spiral into verbal and physical confrontations despite the efforts of dozens of Victoria Police officers to keep the two sides apart.

“That’s still one China, do you understand?” a male pro-Beijing protester shouted at a couple of female pro-Hong Kong protesters. Several young men behind him shouted at the women: “Fuck off, bitch!”

The scene echoed protests in Sydney, Brisbane and Adelaide, all stirring alarm at the potential of the crisis in Hong Kong to reverberate powerfully on Australian university campuses and in Australian cities. Clashes between the two international student populations also occurred in Canada and the United States over that weekend.

Protesters came to the streets with passions stoked by furious online clashes. On Chinese social media platforms Weibo and WeChat, mainland students had written patriotic posts and shared videos of on-campus pro-Hong Kong rallies. Tensions grew with the circulation of fake news about local pro-Beijing protests within the Chinese-Australian community. 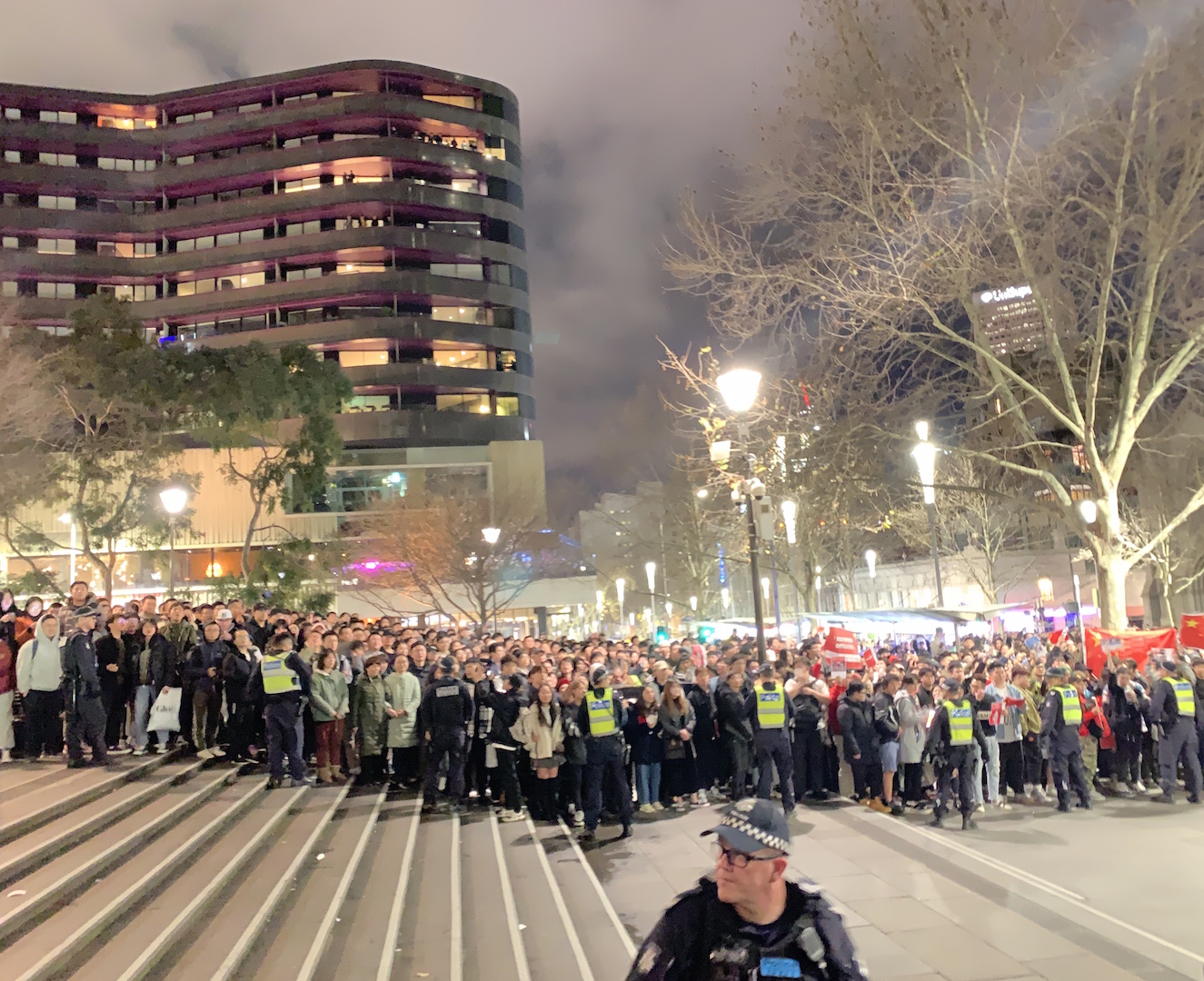 Australian-based Chinese media described the local protests as advocating for Hong Kong to gain independence from China. Rally organisers denied this, saying they were only seeking to reiterate the five central demands by protestors at home for action to protect democracy, including a complete withdrawal of the extradition bill, and an independent commission into the alleged police brutality.

Siem*, a mainland Chinese international student, first posted about the Melbourne rally on Weibo early in the week, cautioning fellow students “not to go to the State Library” and risk conflict with “the radicals and independents”.

But on Friday night, by the time the crowd at the rally peaked around 8pm, there were reportedly an estimated 1000 people gathered, at least half of them apparently on the pro-Beijing side.

The Citizen’s reporters on the scene observed that the majority of participants on the pro-Beijing camp were students, whereas the pro-Hong Kong camp drew a mix of students, older Hong Kong migrants and local activists.

Relations between the two camps were tense from the outset, and quickly deteriorated when a group of young pro-Beijing protesters began quarrelling with a couple of middle-aged pro-Hong Kong protesters. This ignited a wave of angry profanity from the pro-Beijing protesters, despite appeals from some of  their fellows – “don’t swear”. A few Hongkongers responded with similarly strong Cantonese oaths.

Both camps also sang their causes, with pro-Beijing protesters singing the Chinese national anthem and patriotic songs, while the pro-Hong Kong protesters sang English and Cantonese renditions of Do You Hear the People Sing.

Individual protesters from opposing sides argued toe-to-toe. One furious pro-Beijing protester declared: “It’s at the US-China trade war, you guys are being used! You guys are just one of the tools for negotiation, they have already sold you!”

“Don’t be so stupid!” replied by a middle-aged Hongkonger in Mandarin.

Police stepped in when a Chinese national flag was snatched by a pro-Hong Kong protester, and rival camps began pushing and shoving each other. About 20 police pushed between them, and at 8.15 instructed the organisers to shut down the protest 45 minutes earlier than scheduled. Around one quarter of the Hong Kong brigade left, while most of the pro-Beijing camp remained. 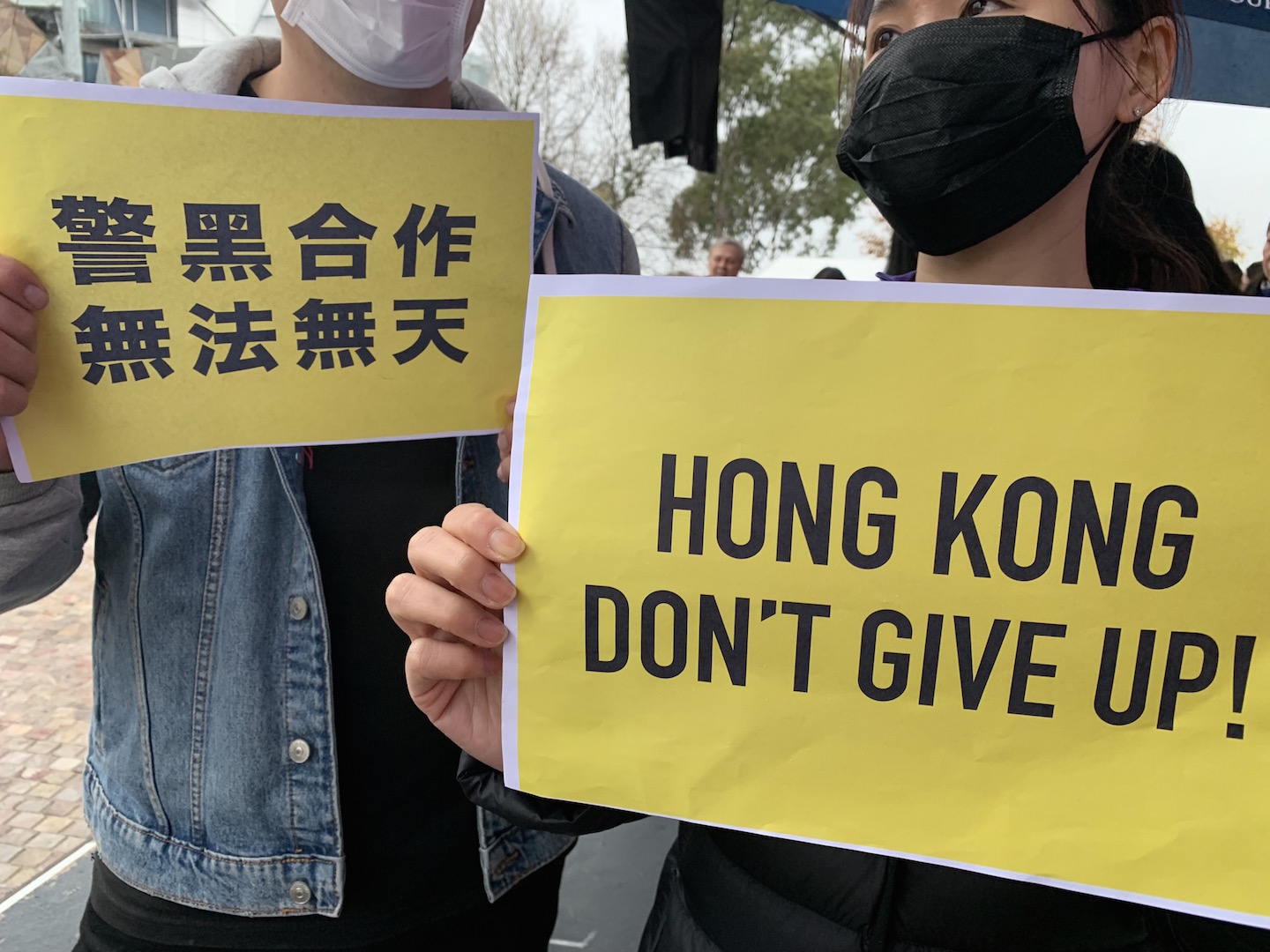 From the Hong Kong side came a warning in Cantonese to the rival camp of the limited rights to protest back in China. “Watch out, you might not be able to return to mainland（小心返唔到大陸啊)!” This provoked a few laughs. A young man in the Hong Kong ranks shouted in Mandarin: “Freedom is a good thing (民主是个好東西)!”

Victoria Police started to clear the crowds and directed lingerers to remain apart. By 9.30, both sides had departed.

Chen*, a protester from the pro-Beijing camp, said she wouldn’t speak to any of the Melbourne journalists who came to the scene to cover the rally as she believed their reports would be biased.

She said that during the height of the protest  she was called “Shina pig (支那猪)”, a derogatory word widely regarded as a racial slur used by the Japanese during World War II. “An Australian also shouted to us, saying ‘go back to China’,” Chen said.

Chen and some mainland students are proposing a pro-Beijing event in Melbourne against Hong Kong independence and violence. She didn’t respond to The Citizen’s enquiries on the event details.

Eugenie*, a member of the pro-Hong Kong student association that organised the protest (VHKTSA), was disappointed when the rally was shut down.  “We were also very disappointed because we don’t think the Chinese students or protesters really understand our demands, and they didn’t try to understand our stance before they came and crashed our rally.”

“We never ever say that we support the independence of Hong Kong, and we’re pretty sure that we’ve been always saying that (the rally) is not about independence,” she said.

When asked about statements from some people in the Hong Kong camp clearly urging independence, Eugenie said she couldn’t speak for every individual, but stressed that the purpose of the rally was just to stand in solidarity with Hongkongers at home.

Siem, who didn’t attend the protest, shared videos of the night from pro-Beijing students on her Weibo account. “Mainland students were there to oppose the radicals who supported Hong Kong independence, yet it’s hard (for mainland students) to distinguish Hong Kong protesters with moderate opinions from the radicals.” 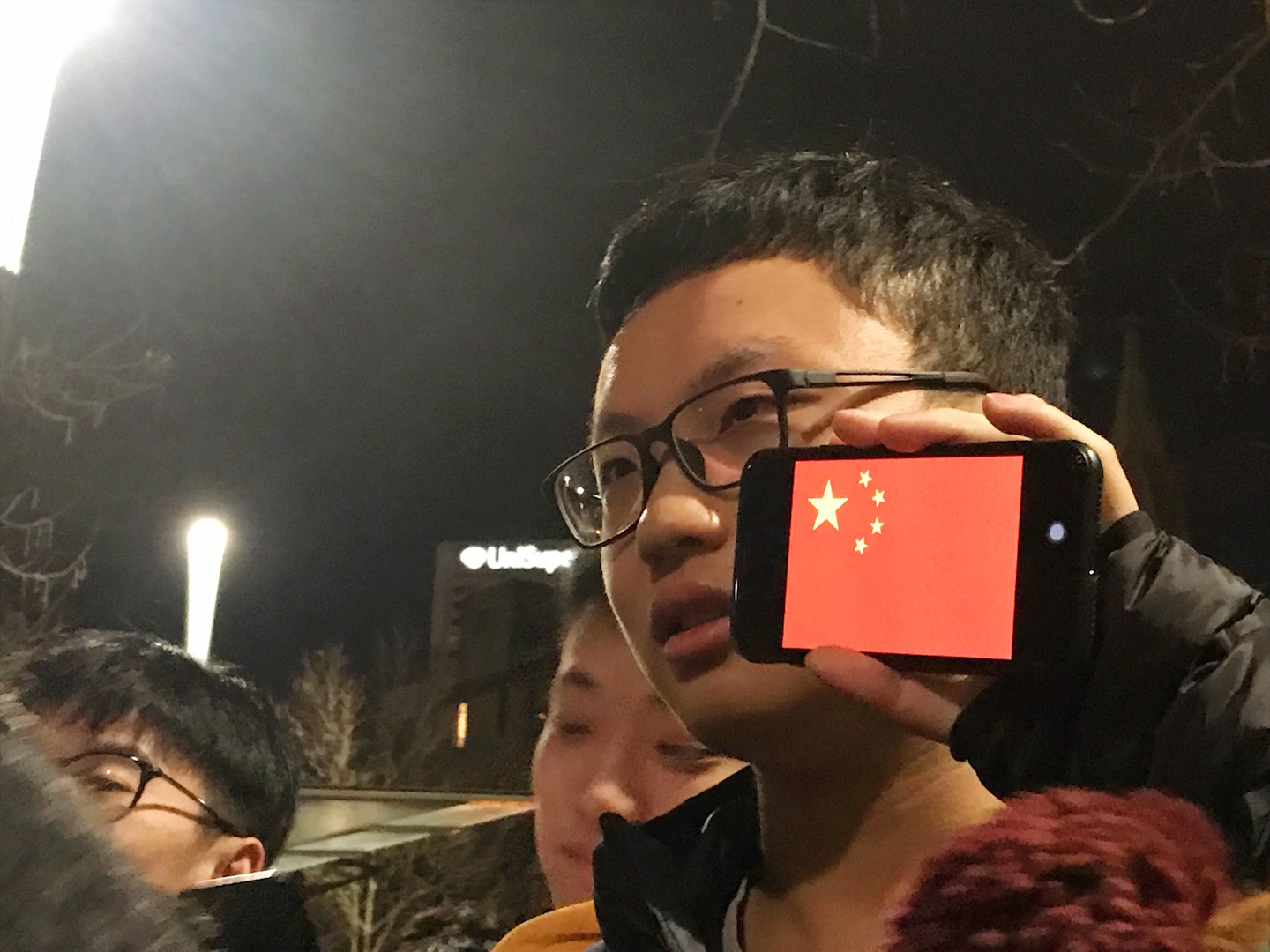 Ms L*, a Hong Kong student who was at the library, said she believed the rally was held to support the consensual values among Hong Kong protesters, “such as rule of law and the maintenance of ‘One country, two systems’”.

When asked about her thoughts on the controversial slogan shouted by many – “Liberate Hong Kong, revolution of our time” – Ms L said she didn’t believe it referred to independence in the current context.

Two weeks on, there’s still fertile ground for continued dispute around the political ambitions of the Hongkongers.

Hong Kong student Mandy*, who took part in the library protest, argued that the pro-Beijing students there were “unreasonable” … (The conflict) makes me feel that the patriotic students are using the freedom they can have when in Australia to oppress Hongkongers’ freedom of speech.”

Mandy said she had hoped to share more dialogue with mainland students around what’s occurring in Hong Kong, but has now changed her mind.

“I’m a bit scared of bringing up [the conflict] with my mainland friends. Firstly, I don’t know what their stances are. Secondly, I don’t want to destroy our friendship just because of talking about this.”

*All the protesters interviewed asked to remain anonymous. 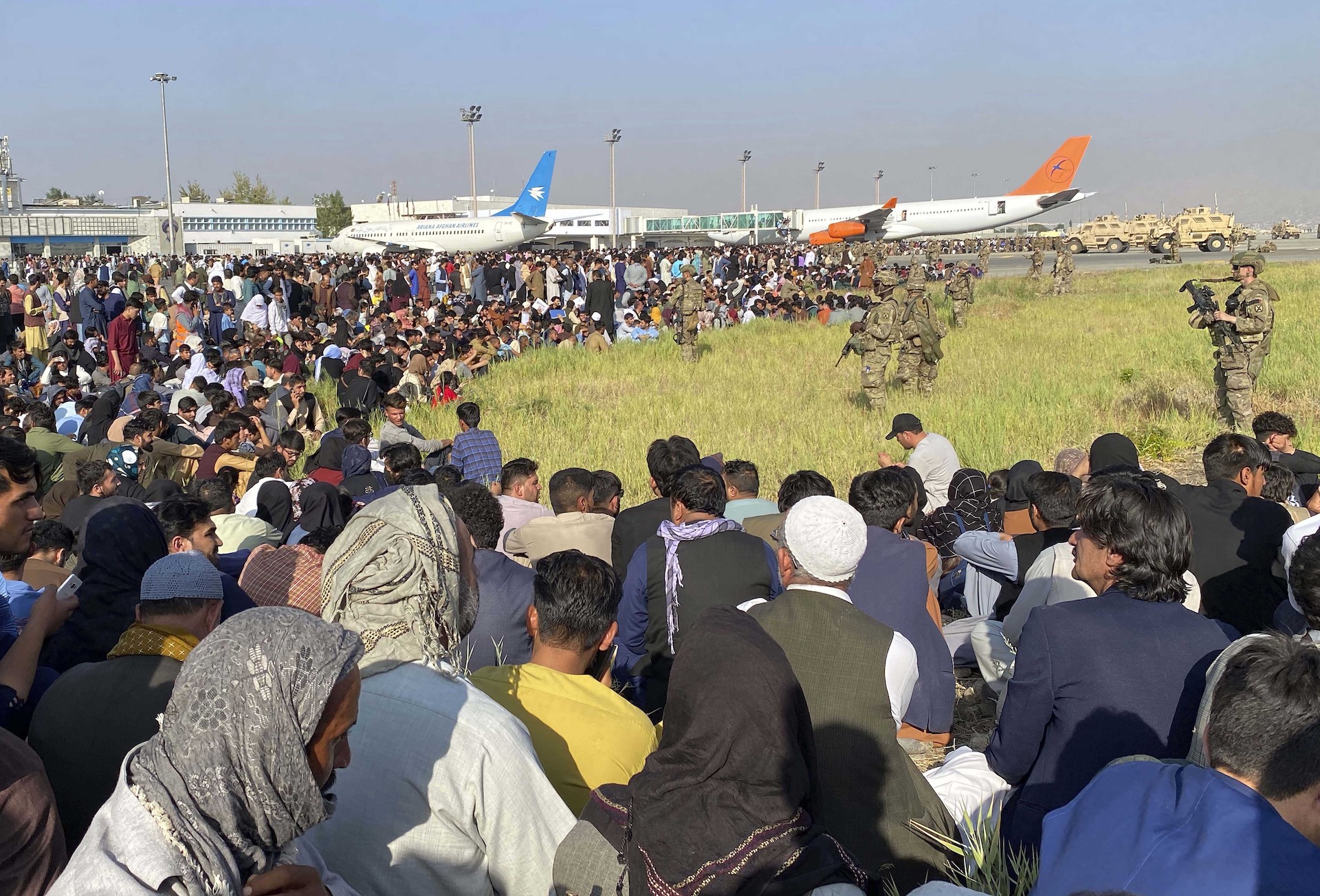 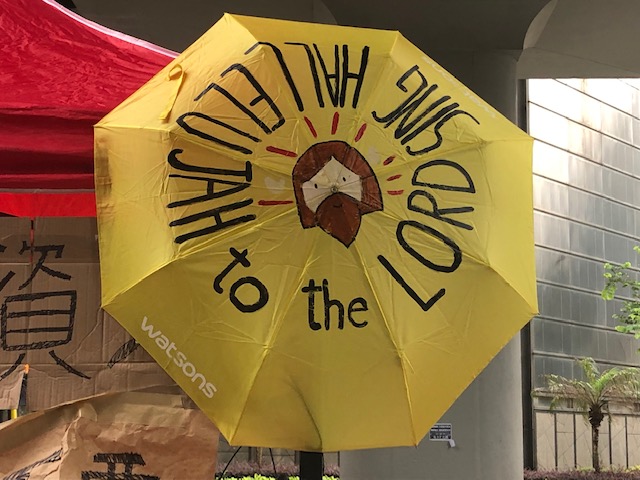