As security measures in Australian detention centres get tougher, community visitors wanting to get inside the wire to support detainees confront increasing obstacles. Many are giving up, regular visitors say, and cherished connection with the outside world is lost. Nazli Bahmani reports. 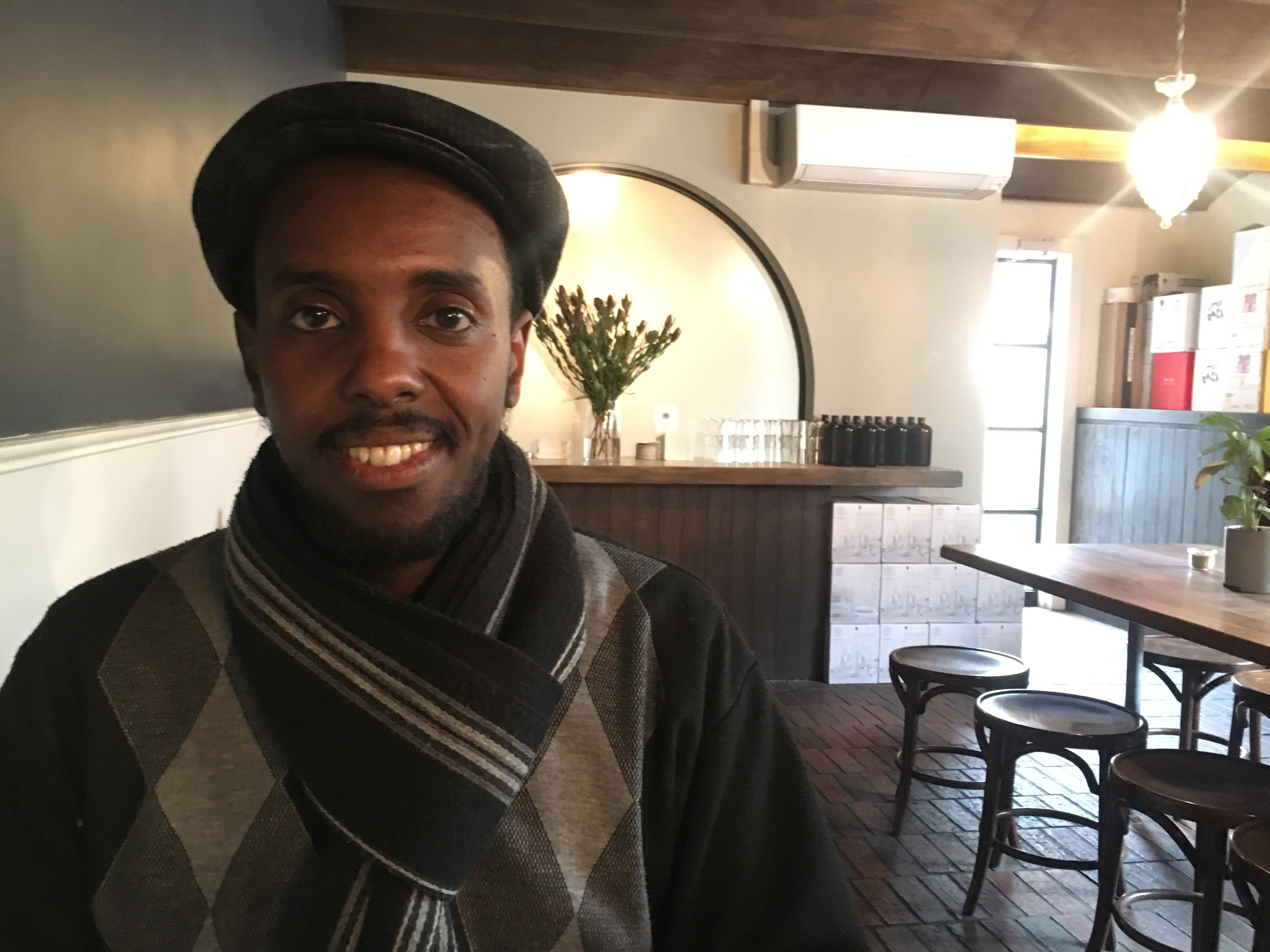 The bright yellow door radiates a mocking cheerfulness, encircled as it is by tall barbed wire fences.

Through the door, in a small grey room, a guard sits behind a desk checking visitors’ IDs against a list of names. Awale Ahmed flashes a warm smile exposing all his teeth as the gift he has brought is sent through an x-ray machine. “It’s only a birthday cake, man,” he says to the unamused Serco Australia contractor as he is directed through a metal detector.

This apparatus appeared at the Melbourne Immigration Transit Accommodation centre (MITA) in Broadmeadows, in Melbourne’s northern suburbs, about a year ago – part of a ramping up of security measures at facilities around Australia where asylum seekers are held in detention. The new protocols have been enough to dismay and dissuade many once regular visitors, but Ahmed takes it in his stride.

A 35-year-old Somali-born industrial engineer and poet, Ahmed has been visiting detainees at MITA for the past two years.

“I started because of Trump,” he says. “Don’t say he has never done anything good.” He’s referring to US President Donald Trump’s implementation of travel bans targeting several Muslim-majority countries shortly after his election. In the fallout, Ahmed attended a rally in Melbourne where he heard a speech by the Greens MP Adam Bandt. That speech led him to a gathering where he met an artist, who then led him to MITA, and he has never looked back.

Today he’s visiting an Afghan man he has come to regard as a kind of brother, despite their vastly different backgrounds.

Ahmed makes the trip to MITA at least once a week, travelling 14 kilometres from his home in Essendon, picking up any other visitors who need a ride along the way. “I guess I do it because I feel that I can,” he says.

On arrival, after providing his 100 points of ID and passing through the metal detector, Ahmed is required to consent to being scanned for drugs. The process is similar to the random explosives tests conducted by airport security staff, with swabs taken from a person’s clothing and put through a testing machine for traces of anything illicit. These contact drug tests were introduced for visitors last year.

Ahmed consents, although he makes the point that “the website says you can’t be on drugs, but the test isn’t for that”. Contact drug tests only determine if a person has been in contact with drugs, not if they are on them.

Onshore detention centres are managed by Australia’s home affairs department, and presided over by Minister Peter Dutton. The department has stated that the increased security measures are necessary due to the changing population of detention centres.

In Victoria, the long established Maribyrnong High Security Detention Centre was closed in January this year shortly after the opening of MITA North, a new high security compound.

The Human Rights Commission report cited concerns over the blanket restrictions relating to excursions, personal items and external visits being applied to all detainees, regardless of their personal circumstances and risk profiles. It argued that restrictions on visitation “may not be reasonable and proportionate, particularly for visitors who have a proven track record of complying with entry requirements”.

Ahmed has seen many faces come and go over the two years he has been a regular visitor at MITA. The person he’s come to see today is someone who he has grown to admire, Afghan asylum seeker Nasir Moradi. As The Citizen observed when we accompanied Ahmed on his regular visit, the feeling is mutual.

Finally inside the visitors room, Ahmed greets Moradi with a warm embrace. He presents the cake, which is decorated with peanuts and gummy bears. The two men argue about who will make the tea, Moradi insisting his visitors should sit down.

For all the differences in their cultures and circumstances, the pair share a backstory. Both escaped violence in their homelands in the hope of a better future. For Ahmed, his mother fled Somalia when he was five years old for Saudi Arabia, while Moradi escaped Afghanistan due to persecution over seven years ago.

But while Ahmed found a welcome and work and a community, Moradi has been in detention limbo for the last six years.

His application for asylum was denied because the department was unable to confirm all the details of his claim. In immigration law, this means that the department has not proven that the claim is false, rather the department cannot determine it is true. What will become of him, he doesn’t know. In this vacuum, his connection to Ahmed and the outside world is cherished.

The assembled group of around 10 detainees and 5 visitors sing happy birthday. Some are overcome with emotion as they share hugs and take photos before sharing the cake and sitting down to drink some tea.

Moradi says the friendship that’s formed between him and Ahmed allows him to retain some sense of dignity in an environment where he has no control over his future.

“We are all human,” he says, but he only feels valued as one by visitors like Ahmed.

As the hurdles for visitors to access the centre have become more formidable, it’s taken its toll on the relationships between many detainees and even the most devoted of their external supporters.  Where once a visit could be organised by sending an email to the centre, there is now a 10-page online application process that must be completed five days in advance.

This is the process to visit any single  detainee. To visit multiple detainees – the limit is five – separate applications must be submitted and approved by Border Force Australia.

“This approval is only valid once, so every week we have go to through the process again,” says Ahmed. The restrictions mean that visitors need to coordinate with each other to try and make sure people aren’t left out.

Ahmed says that these new steps have stopped many regular visitors from returning, “especially people who are older or not tech savvy, it can be a little complicated for them”. He tries to help others out with the process, “but sometimes, I just don’t have time”.

Moradi feels the weight of the shift. Where once the visiting room was full of people breaking bread and sharing food, these days the numbers have dwindled.

Detainees and visitors are now assigned tables and he says their ability to mingle is largely dependent on the disposition of the guard on duty.

Visits are a big deal for detainees. Moradi says they take pride in the occasion, dressing up in their best clothes.

When he first arrived at MITA he did not feel the intention was to punish him, he says. But today he says his situation feels worse than being in prison.

“In prison they know how many days they have left, they can count how long until they can get out,” he says.

Moradi says that inside MITA he feels helpless, and this feeling has grown as the conditions inside the centre have become more stringent. Room checks have become almost weekly, he says, with guards handling the detainees possession with little care. All detainees are frisked before meeting visitors and their movements within the centre have been restricted.

He occupies his days doing something he has learned to love – painting. His art has now been exhibited across Melbourne.

His subjects vary. He paints hopeful landscapes of an outside world he imagines, of green mountains and lakes with the warm sun shining down on them. A small bridge bearing both the Aboriginal and Australian flags leads to the island of Australia.

But in darker times he depicts haunting images of people suffering on opposite sides of a fence, not knowing who is really trapped. His work represents the wide range of mental states anyone in detention endures – hope, suffering, confusion, and despair.

Ahmed says he’s proud to see his friend’s work outside of the detention centre.

For two hours the visitation room buzzes with the sound of chatter. Little Isabella, who has spent her whole life in detention, jumps from lap to lap enjoying the attention. People play Uno and drink tea. At 8pm, there’s a final round of hugs. Ahmed and the other visitors filter out of the room and back into the wider world as Moradi and his fellow detainees shuffle through the door on the opposite end of the room, back into the uncertainty of MITA.

Outside, Ahmed’s determined cheerfulness falters as he silently climbs back into his car and heads for home.