An understanding of war through art

The most powerful depictions of war are often created far from the trenches, imagined by those furthest away. Drawing on the complex nature of war itself, such expressions of conflict through art are diverse and make for disparate perspectives. It is these that are reflected in a new exhibition coinciding with the 100th anniversary of the Gallipoli landings.

As the nation gathers amid a sea of red poppies, Follow the Flag: Australian Artists and War 1914–45 has brought together a diverse range of visual representations of the World Wars.

With a collection of artworks, photographs and artefacts drawn from the 20th century’s great conflicts, the National Gallery of Victoria’s exhibition illustrates how the people of the time came to understand war through image and art.

Vibrant propaganda posters fill the exhibition entrance, a rush of patriotism portraying the Great War as an event of which to be proud, and one’s participation in it as something to boast about to friends and family. The posters reveal how war contributed to the way in which the ‘typical’ Australian was defined — a brave and noble soldier who did what was best for his country. The faces of some of these men fill the next space, the World Wars having created a yearning for portrait photography. Something of a ritual in preparation of being deployed, soldiers would have their photos taken for newspapers or future obituaries. The photographic works of a pair of sisters who owned a studio on Melbourne’s Collins Street are displayed, the dim lighting contrasting with shiny uniforms yet to be tarnished.

Photographers of the time played an important role in documenting the wars as they happened and give rare insight into day-to-day life in the trenches. Frank Hurley was appointed official photographer of the Australian War Records Section in 1917, his images showing the desolate and graphic reality of war in his first collection, shot in Boulogne, France. On his first day on the front line, he recorded in his diary: “What an awful scene of desolation! Everything has been swept away – only stumps of trees stick up here or there and the whole field has the appearance of having been recently ploughed.”

The only film footage shot at Gallipoli in 1915 plays on the length of a wall in this room, adjacent to Hurley’s images. The grainy footage shows diggers marching in what is described as an Anzac Uniform – very casual-looking shorts and sometimes singlets.

Moving on from the trenches of World War I, the exhibition goes Behind the Lines, which offers perhaps its most intriguing exhibits, a collection of art works that show the tedium of war. From exhausted soldiers waiting in transit between train stations to platoons of men gazing at a film with a beautiful woman in it, the evocative images on screen in stark contrast to their surroundings. The work of artists displayed in this area depict the day-to-day and less glorious experiences of war — the boredom, the waiting, a lack of routine. The first piece that captures the eye in the World War II gallery is a painting by Indigenous artist Paddy Fordham Wainburranga titled How World War II Began (through the eyes of the Rembarrnga).  This bark painting shows how Indigenous Australians viewed the war and how deeply affected they were by the bombing of Darwin.

This sense of turmoil and emotion is continued in a second standout piece, a caricature of a solider by Sidney Nolan, Head of a Man. The face is fraught with trauma and lies in stark contrast to the opening works of the exhibition, which show relaxed soldiers, blissfully unaware of what was to come. The painting is captioned: ‘Sanity is a relative term. It may be merely a mask – and war but a masquerade.’

The final room in the gallery is dotted with red poppies. Onlookers are invited to place theirs on one of the four walls as a mark of remembrance.

► Follow the Flag: Australian Artists and War 1914–45runs until August 16 at the NGV’s Ian Potter Gallery at Federation Square. Entry is free. 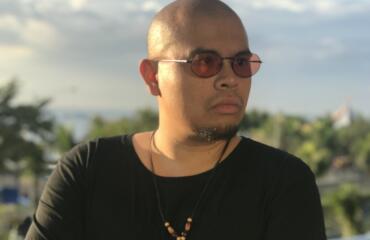