The movies we’re streaming, the books we’re buying, indicate that when we are alone and afraid, we seek escape by freaking out together. Anthea van den Bergh explores the appeal of science fiction in a world gone mad. 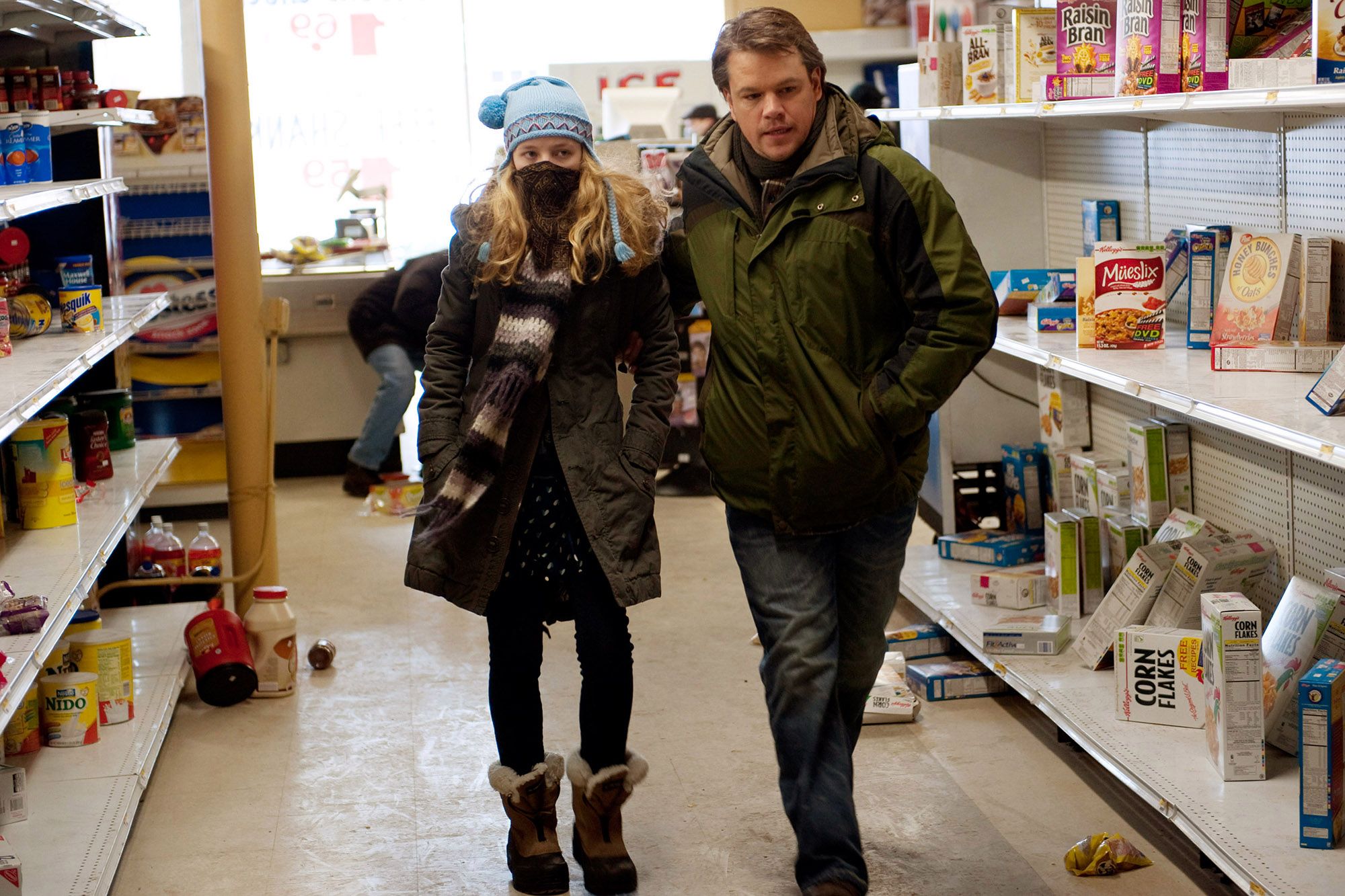 Where's the toilet paper? There are some spooky similarities between the world of Contagion and our coronavirus moment. Anna Jacoby-Heron and Matt Damon in a scene from the film. Picture: Warner Bros.

In the first two weeks of March last year as the coronavirus was declared a global pandemic by the World Health Organisation, one of the most streamed films in the world was Contagion, a science fiction plague film where 26 million people die.

Commentators jumped at the opportunity to unpack this phenomenon. As The New York Times’ Nicole Sperling deadpanned: “One of the hottest movies in the Warner Bros library is a nine-year-old drama that kills off Gwyneth Paltrow in its first 15 minutes”.

The film seemed skin crawlingly prophetic in light of the emerging pandemic, filled with all too familiar images of empty airports and offices, people wearing masks, warehouses full of the unwell, and hysteria over vaccines and supposed cures. And raises the question of what our fascination with the dystopian thriller tells us about the human inclination for such stories, and why we turn to science fiction in times of uncertainty and crisis.

Consider that besides Contagion, sales in plague fiction like Albert Camus’ The Plague went up by 150 per cent worldwide last year, and tripled in France and Italy. Stephen King’s apocalyptic plague novel The Stand also had nearly double the number of online sales. Scholars, science fiction enthusiasts, even neuroscientists have drawn connections for decades between times of crisis and people creating and watching sci-fi. One theory is that sci-fi helps us to navigate and prepare for future threats that are out of our control. To “simulate” the layers of fear and emotions we feel about scenarios like plagues, nuclear warfare, societal change, and ultimately to cope better.

Sometimes films depict literal threats like plagues and killer robots, but others portray more metaphorical scenarios that stand in for real threats, says Luke Devenish, a professional screenwriter and lecturer on genre screenwriting at the University of Melbourne.

For example, he says creatures like zombies are often a representation of plagues and disease – think Will Smith’s I am Legend.

Other figures like King Kong represent a sci-fi sub-genre called “Earth’s Revenge” where the Earth sends an agent to punish us, usually for our arrogance and destruction of the environment. Godzilla, for instance, can be read as a metaphor for nuclear destruction after the bombing of Japan in World War II.

Given the past 15 months of pandemic, none of it now seems particularly farfetched.

“I mean we are living in a dystopia right now,” says Devenish.

“A dystopia is a society where something is fundamentally wrong with it.”

He says Contagion, whose screenwriter Scott Z. Burns consulted closely with epidemiologists to construct a highly plausible plague scenario, triggered our deepest existential fears about ourselves and the future.

The thriller, which depicted the origin of viruses like COVID-19 due to humans disrupting natural habitats, prompted us to ask: How will I manage this kind of reality? What will happen to my family, to my society?

Not that sci-fi always gets it right. Or even gets it right very often. The reality is that the genre’s predictions over the years have been hit and miss.

On occasion, science fiction has predicted major new inventions. Indeed, the idea for the helicopter is attributed by its inventor to writer Jules Verne who described it in his 1886 novel, The Clipper of the Clouds. Verne had previously written that: “Anything that one man can imagine, another man can make real”.

Similarly, something very closely resembling the flip phone appeared in the 1979 Star Trek movie which inspired Motorola’s 1996 model, named “StarTAC” after the film.

However, most of the time the genre falls short of prophesy. Who else sighed when the year 2015 arrived and the world looked nothing like the future predicted in Back to the Future II, decked out with flying cars, hoverboards and self-tying Nikes?

Stephen King was moved to get onto Twitter to illuminate the difference between our real pandemic and the one in his novel The Stand, where around 99 per cent of the world’s population die, saying, “No, coronavirus is NOT like THE STAND. It’s not anywhere near as serious. It’s eminently survivable. Keep calm and take all reasonable precautions.”

But with the coronavirus changing the world as we know it, perhaps science fiction, from the plague variety to stories based in outer space, has a role to play not just in our current reality, but also the post-coronavirus world.

While the genre may not give an exact blueprint, we could use it to process different realities such as widespread technological advances and use of AI and robots, which we could be racing towards thanks to the pandemic.

Sci-fi creators have long been fixated with AI and robots. We’ve seen the emergence of the sociopathic killer trope in films such as the early German silent flick Metropolis (1927), evolving into The Terminator and The Matrix, as well as more nuanced villains like the haunting Hal 9000 in 2001: Space Odyssey.

And while recent decades have brought us some cuddlier or good guy robots (think WALL-E, Marvel’s Vision), when it comes to AI we remain both fascinated and fearful – fears that are often amplified by scifi.

Sci-fi often deals with cautionary tales about technology and the misuse of power. The idea of the surveillance state is the nightmare of many classic scifi films such as V for Vendetta, Gattaca, and of course, George Orwell’s classic novel 1984. Yet neuro-psychology researchers at Georgetown University Medical Centre believe the genre could help us to mentally rehearse and ultimately work through the range of conflicting emotions we continue to feel about technology and the future.

And there is plenty to work through.

With the mammoth efforts going into stopping the pandemic, the coronavirus could certainly be a catalyst for more robots and AI in healthcare and normal life in the future, says Stephen Bornstein, the CEO of the cutting-edge robotics and AI company, Cyborg Dynamics Engineering. (“Yeah, I wanted a cool sounding name,” Bornstein laughs.)

His Brisbane company works mainly with the Australian Defence Force making ground robots and automated technology to support troops entering dangerous areas. “If you think about ground robots in the military, the question is how do we get a human out of harm’s way and use machines instead?”

The 2017 Australian Young Engineer of the Year says the same thinking is being applied to coronavirus around the world. In places such as Wuhan, Seoul and Northern Italy, robots have been used to disinfect rooms, take people’s temperature using infrared sensors and deliver food to COVID19 patients. One of the robots that visits patients has a cute digital face, wearing a mask. We’ve even seen a robot “dog” called SPOT trialled in Singapore which encouraged social distancing in parks. SPOT is now being used in hospitals in Boston as a walking telehealth robot.

And in South Korea, AI-backed technology and surveillance (including street cameras and money transactions) has been used in contact tracing to find and isolate positive cases.

Sci-fi could help us to accept advanced futures – and not feel quite so nervous about seeing SPOT in the park. But perhaps its role is also to teach us to be rightly suspicious, to avoid a reality in which we’re ruled by Big Brother or the Tyrell Corporation (1982’s Bladerunner), to be cautious about the technology we make.

We’ve seen a very contemporary version of this in the 2020 film Songbird, which imagines the worst case scenario of the current pandemic – a highly mutated “COVID-23”, quarantine camps, helicopters overhead, and ominous sanitation goons willing to break down your door.

But these warnings come with the promise of a more hopeful future, says Simon Foster, the Festival Director of the Sydney Science Fiction Film Festival and Sydney’s Monster Fest.

In his work across several film festivals, Foster has seen more of the sci-fi genre’s full breadth than most, from mainstream films that we know and love to indie films (both Australian and international) that range from the experimental to the positively avant garde.

“Science fiction and science do have a sort of love-hate relationship,” he says. “[But] the very best science fiction, even with an inherently bleak vision of society, speaks to a better vision and why it got so bad. It’s trying to direct us on a better path.

“Science fiction with a terrible society is saying we should avoid this terrible existence.”

Screenwriter Luke Devenish calls this the “caution with optimism combination”. He says sci-fi films, even dystopian films like Contagion, are fundamentally life affirming and hopeful. “At the end of the day, technology is bested by the best of humanity, our resilience … The things we treasure about humanity come to the fore.”

Sci-fi isn’t just about plagues, technology and aliens, he says, but about heroism, big and small, our faith in humanity, and what drives us to carry on when nothing is the same. It’s telling us, ultimately, that we will be okay.

“Do you notice there are no countries in Star Trek? We’re just from planet Earth.”