Russell Crowe reimagines the Gallipoli myth through one man’s painful journey. He spoke to Andy Hazel. 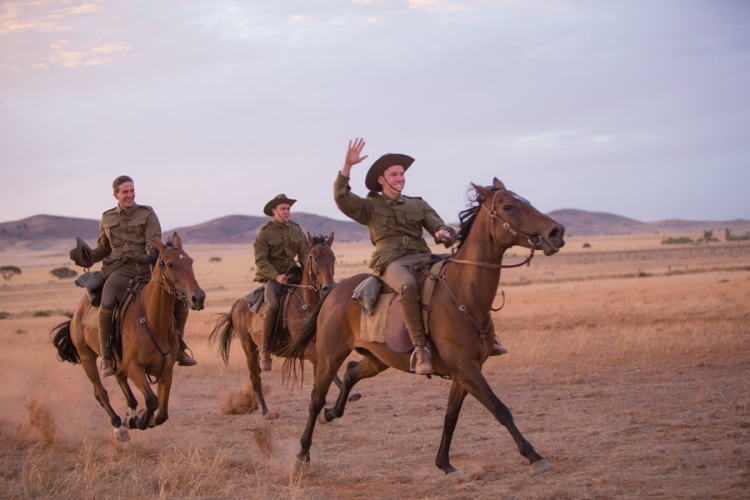 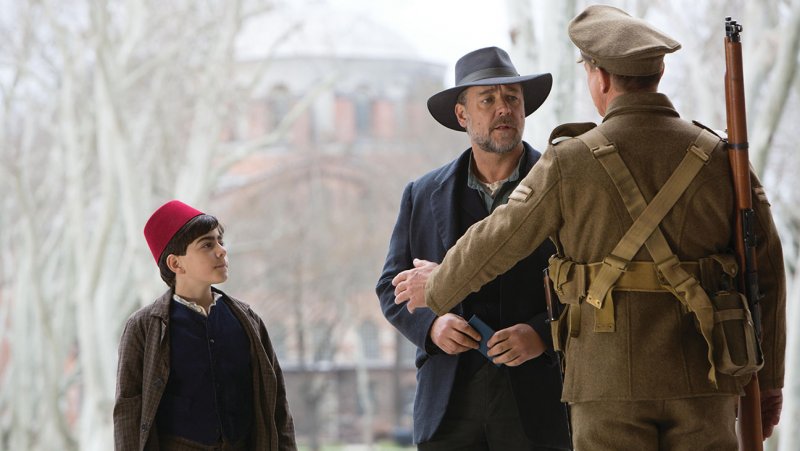 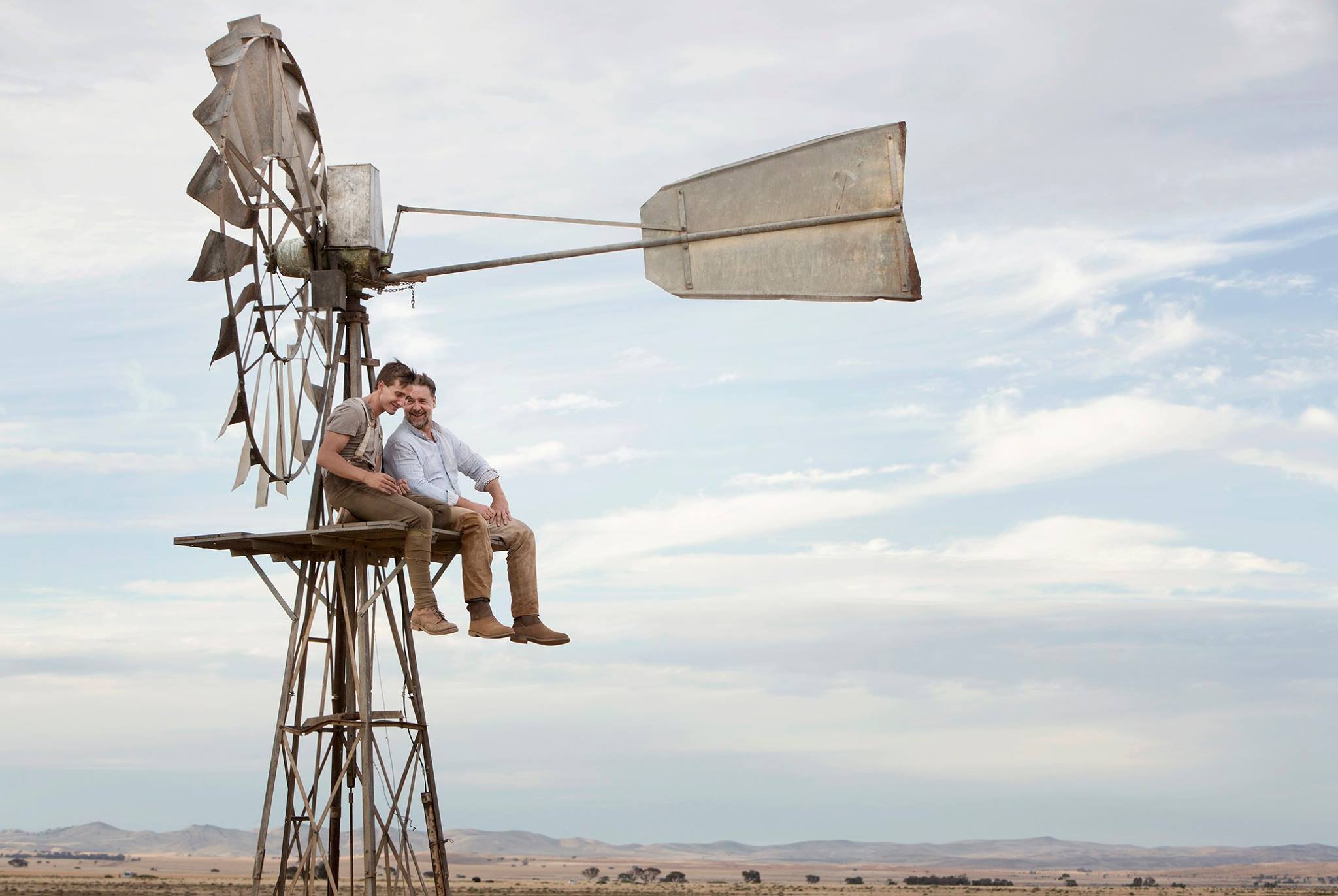 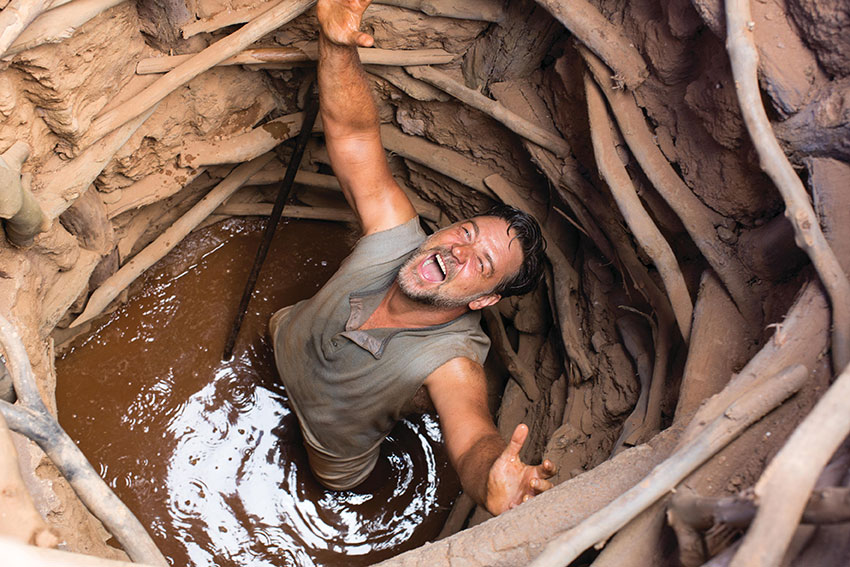 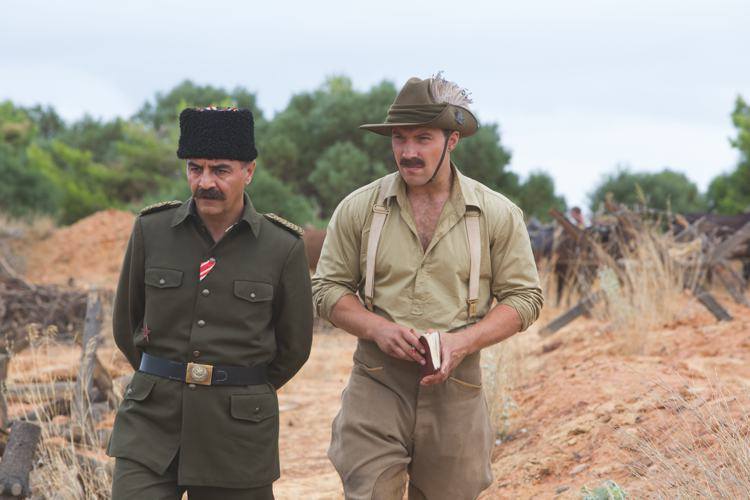 Whether winning Oscars, chucking phones, wearing trackie dacks for TV interviews or manipulating journalists, Russell Crowe turns his hand to most anything with a self-assuredness sorely missing from much of Australia’s creative output.

In his directorial debut, The Water Diviner, Crowe tells a story perfectly suited to his brio, one of an ordinary Australian bloke with a broken heart relying on a weathered charm and never-say-die spirit to fight against impossible odds.

When Crowe announced his intention to helm the (nominally) true story of Joshua Connor’s search for his three sons, four years after the end of the First World War, you could be forgiven for presuming the film would feature bulletproof Aussies hewing anonymous Turks before sharing a wink and a ciggie.

But Crowe says that it was the screenplay’s focus on the Turkish experience of Gallipoli or, to give the battle its Turkish name, Çanakkale, that appealed. 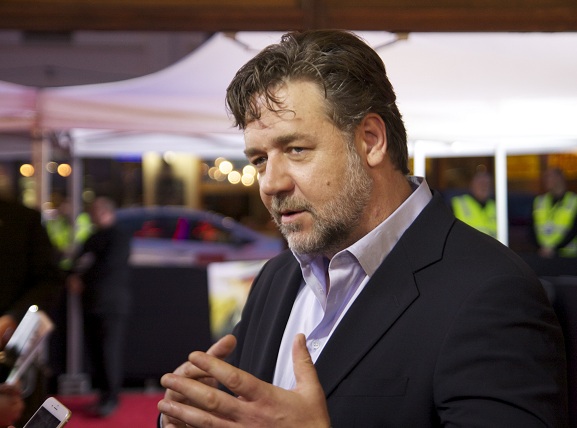 “That was the thing about the script that really blew me away,” Crowe tells The Citizen. “The Turkish perspective. I was inspired and fundamentally embarrassed that I’d spent all this time at dawn services and never for a minute considered the other point of view. Coming up to the 100th anniversary, I think it’s time that we did.”

Yilmaz Erdogan, one of the stars of the burgeoning Turkish film industry, plays Crowe’s Turkish compatriot, Major Husan. He gives voice to the Turkish experience of the war. In fact, the actor-cum-director spent his compulsory army service in Gallipoli.

“It was a most difficult part,” he says. “It’s not a regular project. I’ve grown up with these very legendary stories.”

Erdogan likens his role to performing a national duty. “You have to represent your country, your grandfathers,” he continues. “It was truly emotional. At the same time you have to control your emotions, mostly people [don’t] think about themselves when they act, but you have to create your character inside.” 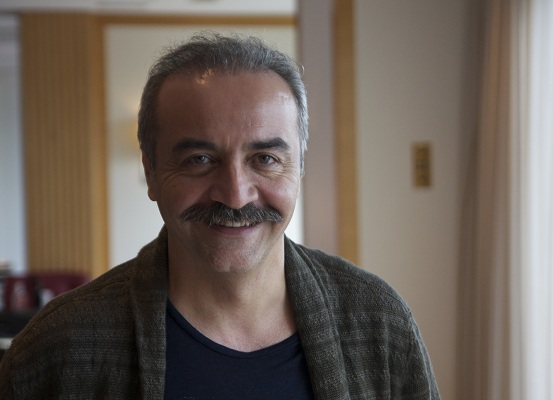 The Water Diviner is set to be one of the year’s few Major Australian Films when it is released on Boxing Day, and one likely to lure audiences in with the promise of telling ‘the ANZAC story’, a deception to which Crowe confesses openly.

“Right from the beginning of the film it flips that expectation that people have come to think about Gallipoli. We only have our perspective.”

The burnished majesty of the film is based on one line found buried in a letter in the Australian archives by co-screenwriter and co-producer Andrew Anastasios, researching correspondence for a centennial re-telling of the legend: ‘One old bloke managed to get here from Australia, looking for his son’s grave.’

This ‘old bloke’ is, of course, no vision of decrepit frailty. He is the active, muscle-bound and strikingly humble Crowe.

Joshua Connor sees his missing sons in a recurring dream and journeys to Turkey to fulfil a promise to his wife. In telling the story of one man’s search for his sons, Crowe explores the reason for the Australian presence in Turkey – king and country – and follows the journey of a farmer trying to find domestic peace.

As a farmer, Crowe’s Joshua Connor can shift cubic tonnes of earth singlehandedly in one golden-hued afternoon. As a foreigner, he can convince sceptical Turkish soldiers to take time out from their endless war with a just few stern words. As a grieving father, his shining blue eyes can make a grieving mother [a luminous Olga Kurylenko] doubt her cultural norms.

That Crowe can sell this mythologised embodiment of Australian masculinity thriving in an unknown land so well is a testament to his acting prowess, a script that rarely sets a foot wrong and a film that is never less than a balm for the eyes.

“That was the thing about the script that really blew me away. The Turkish perspective. I was inspired and fundamentally embarrassed that I’d spent all this time at dawn services and never for a minute considered the other point of view. Coming up to the 100th anniversary, I think it’s time that we did.” — Russell Crowe

As a director, Crowe has surrounded himself with the talents of cinematographer Andrew Lesnie, who is given free rein to set the story in an Australia drawn from Arnott’s biscuit tins and posters that once coaxed ‘Ten Pound Poms’ to populate the countryside.

Christopher Kennedy’s production design is similarly evocative, and scenes set in the dusty markets of Istanbul, the dust storms of the outback and the chocolate-box hotel in which Crowe’s John Connor spends much of his time are meticulously constructed, appearing wholly natural.

“There’s some long relationships on this film,” says Crowe, explaining that much of the crew comprised teachers from whom he had learned as a young actor, and people with whom he’d developed long professional associations. The crew seemed perfectly formed to allow him to feel comfortable and in control.

“Being able to bring those mentors of mine into one cohesive group and of course a whole lot of young people who weren’t around in 1989, it was a joyful thing. We operated really well together as a crew. We moved really fast and worked really long hours and partied hard. It’s the best way to make art,” he grins.

Says Erdogan: “For me this is a learning process. It is maybe the biggest gift in my life to meet with Russell Crowe, because I love learning and he loves sharing his experience and knowledge. It’s wonderful opportunity for me because I learned a thousand things about the job. As an actor, a producer and writer – in every way.”

As Australia increasingly sees its national character in the mythology of Gallipoli, and less in Peter Weir’s Gallipoli, a brace of films examining the era is due. After The Water Diviner will come the TV series Deadline Gallipoli, America’s The 34th Battalion and the Turkish-Australian co-production Anzac and the Johnny Turk.

Crowe’s sensitive telling of this compelling story is permanently lit with a golden glow. Battle scenes veer between the harrowing and the familiar. Tropes common of a protagonist in a foreign land (the beautiful ingénue who cares for him, the lovable street urchin, the scatological senile elder) are used to draw in the curious before revealing the true threats faced by Crowe’s John Connor. 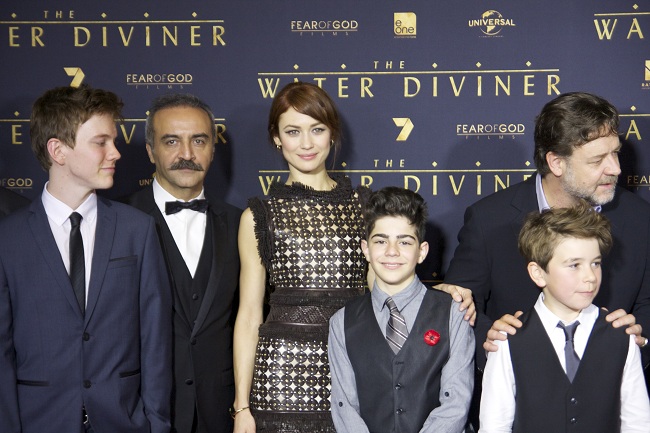 Erdogan’s hangdog expression and lidless gaze drove his previous film Once Upon a Time in Anatolia and it is no less powerful here. From Jai Courtney’s fatigued sergeant to Benedict Hardie’s mischievous soldier Dawson, there is a genuine sense of allegiance communicated in the few scenes they share.

This is a film destined for a place in school curricula, among AFI award nominees and on Top 10 box office lists, and is a glowing example of how Australia loves to see itself; a resourceful and righteous and indefatigable victim of savage injustice.

An exchange toward the film’s end in which Joshua Connor is asked why Australians are fighting in Turkey speaks volumes.

“All war is for land,” a Turkish soldier says.

“Then why are you fighting?”

“So you come all this way to die and you don’t even have anything to show for it? We should do business with this country!”

It’s a commercial sentiment that makes sense to the film’s producers, and is perhaps one worth pondering as Australians are drawn into another Middle East war about principles. 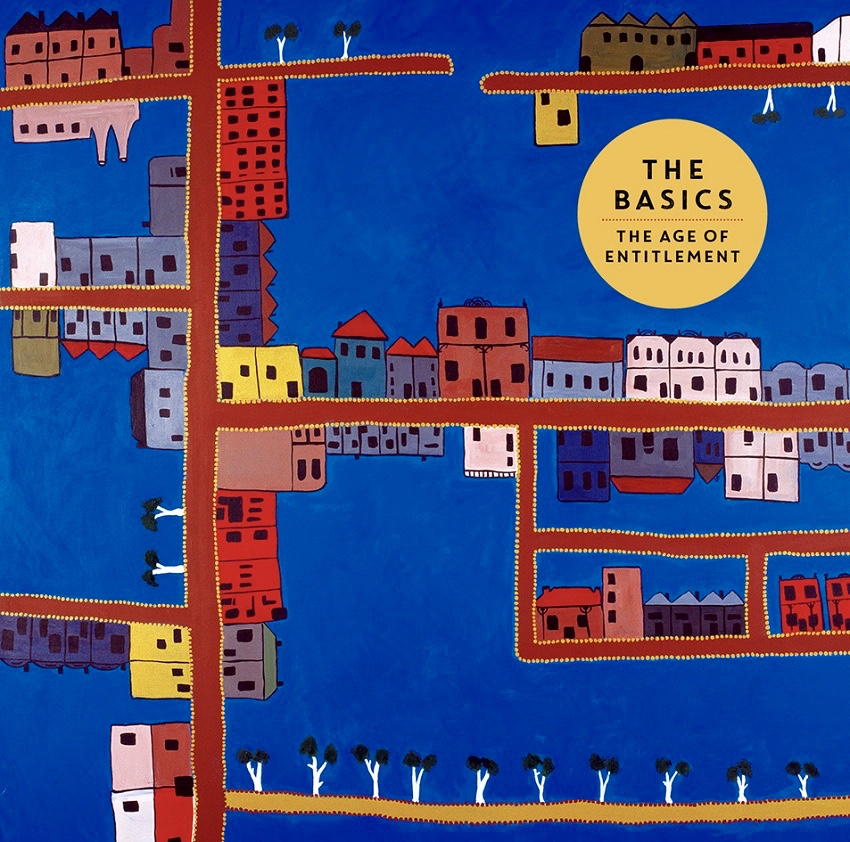 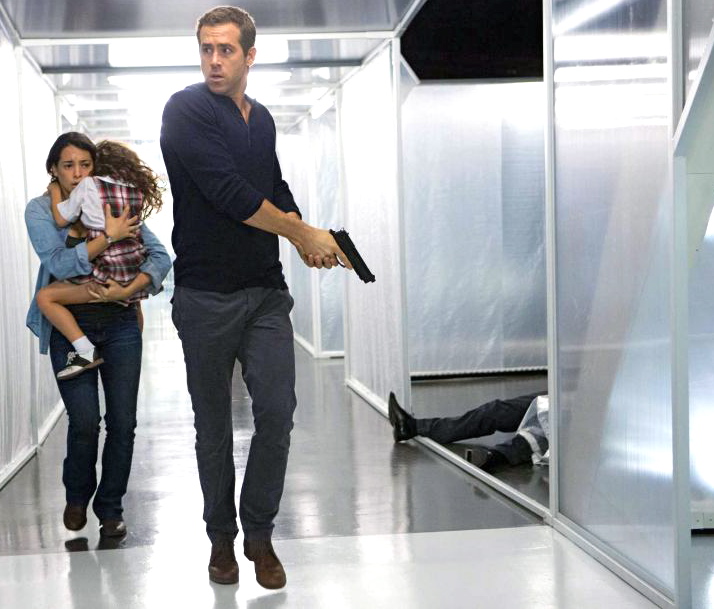