The pandemic forced many people to a place they never expected to find themselves – queuing for welfare payments. From today, for those still claiming JobSeeker, there will be more hurdles in a system critics say is failing. Ashleigh Barraclough reports. 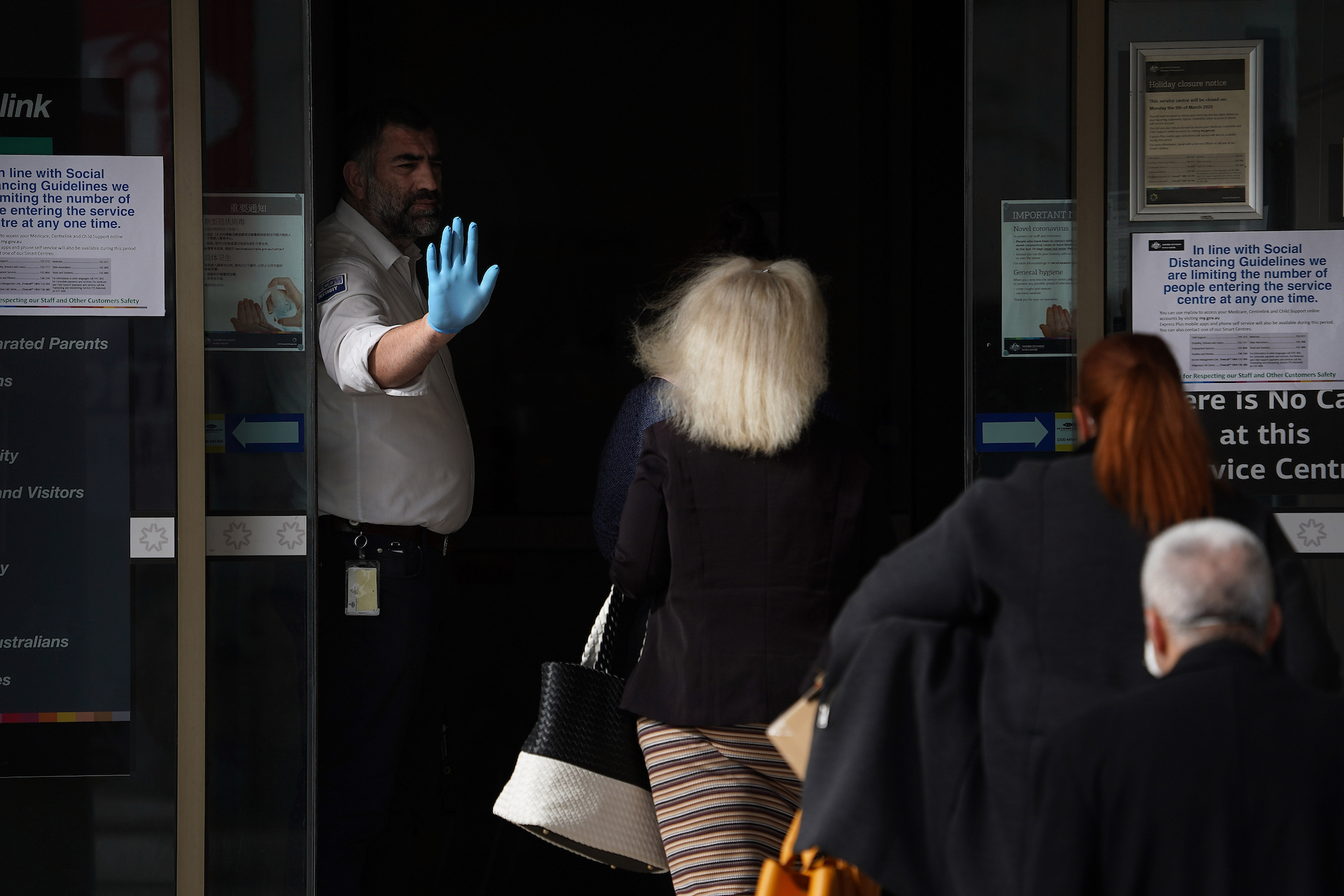 People are seen queuing outside a Centrelink office in Brunswick, Melbourne, Tuesday, March 24, 2020. Centrelink offices around Australia were inundated with people attempting to register for the JobSeeker allowance Photo: Stefan Postles/AAP (with permission)

As mutual obligations for people on social security gear up this week, welfare recipients and small business owners are complaining there are still more applicants than there are jobs available.

From 1 July, people on JobSeeker – those living in areas that are not in lockdown – are required to apply for 20 jobs a month. This is up from 15 last month.

The fallout of this is not just felt by job seekers. Paul Doevendans, who runs a fire protection company in the south Brisbane suburb Loganholme, believes the ramping up of mutual obligations since September last year is creating more work for small businesses. At the end of April, he received nearly 300 applications for an administrative position with his company.

“That’s way more than I would usually get,” he said.

Usually, he would get around 70 applications for that kind of position, he told The Citizen. As a small business owner, reading through 300 applications is a taxing task. “It’s too much … it’s such a time waster.”

Data from April shows there were 243,500 jobs available, while 1.06 million were still on JobSeeker.

Among them was Isa Pendragon, who was overjoyed when his JobSeeker claim was approved last March. The 25-year-old had lost his income when he was let go from his job as a telephone interviewer for a market research company right before Melbourne’s first COVID-19 lockdown. 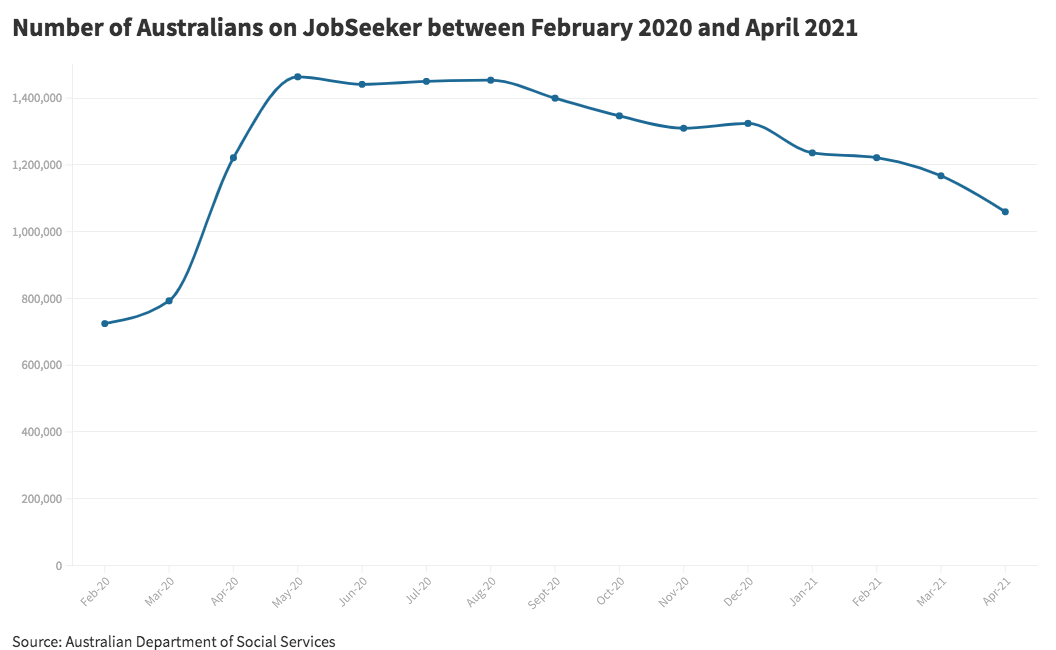 Then as the pandemic raged and Melbourne’s infamously tough restrictions rolled out, Pendragon recalls receiving calls the next couple of months from his government-appointed job service provider, Workskil Prahran, asking for resumes and about his efforts to find work.

Given that there were no jobs to be found at that time, and coming on top of all the other stresses of lockdown, he stopped picking up.

“I hadn’t seen friends or family – I just didn’t want to speak to them.”

When the lockdown lifted in May and another call came, he did pick up, hoping the service may deliver what it promised and help him find work.

Rather than getting support, he found himself at the end of a “very accusatory” line of questioning. The case worker demanded to know why he had not applied for customer service jobs when he had experience in the field. When he explained he had some health issues that made that problematic, his provider said: “You should still apply – you’re on JobSeeker.” 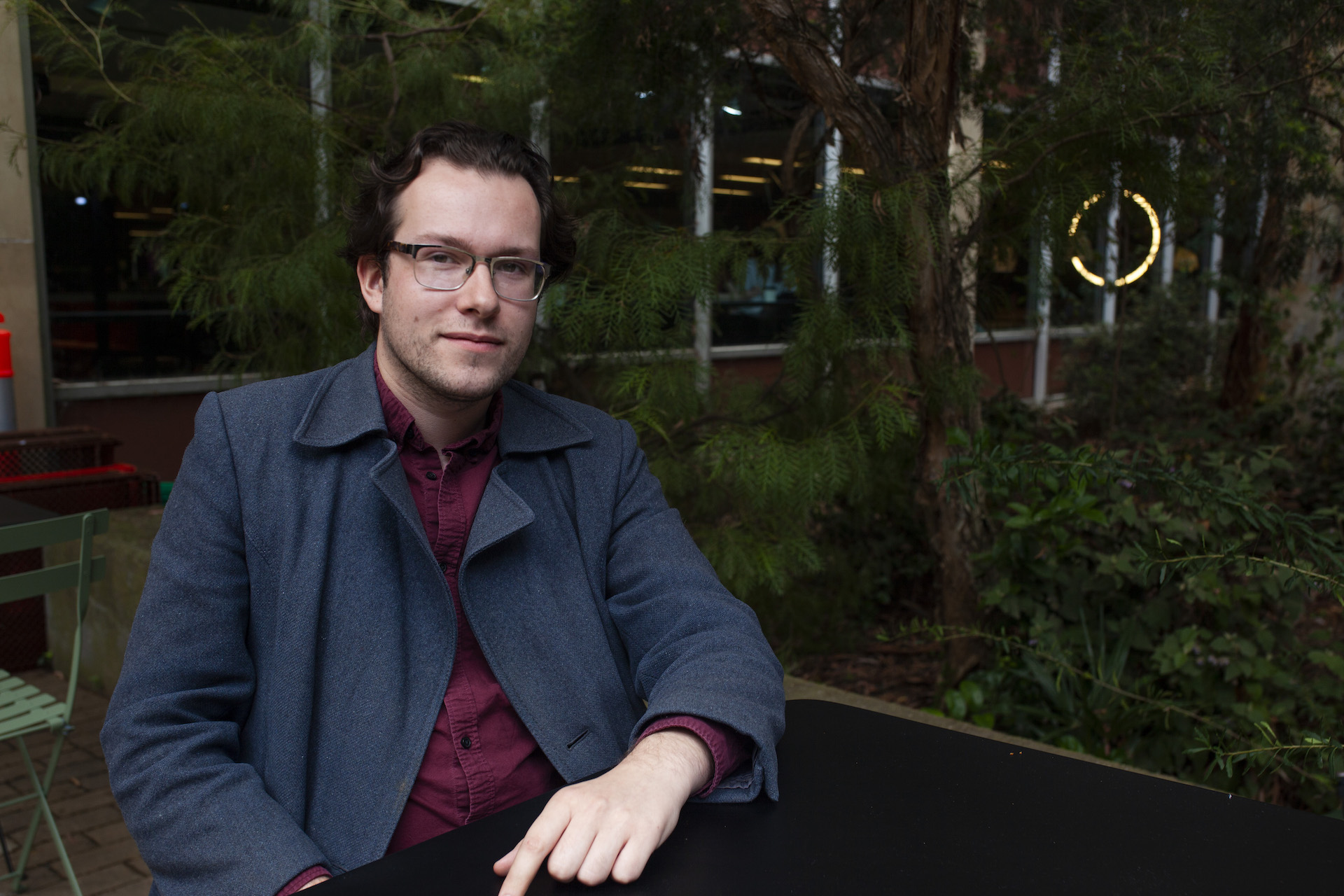 “It just doesn’t seem like [the job agencies] are doing the job that they’re supposed to be doing”: Isa Pendragon, who was initially overjoyed to be approved for the payment, but felt his job provider treated him inappropriately through Melbourne’s lockdowns. Photo: Ashleigh Barraclough

This was despite the fact that through all of this period, the Federal Government had suspended the normal obligations on welfare recipients to seek work due to the COVID-19 emergency.

Pendragon’s story reflects concerns and complaints emerging from many welfare recipients around their treatment during the worst months of the pandemic. When Greens Senator Rachel Siewert, a long-time campaigner for a fairer welfare system, put out a call via Facebook in February asking about people’s experiences with providers during the pandemic she was staggered by the response. Some 600 responses just over the weekend.

“This shows the system is completely flawed,” Siewart says.

The accounts coming to her, some of which she read out in the Senate, include accusations of job service providers trying to enforce suspended mutual obligations, turning up at people’s homes, and unnecessarily suspending payments.

The pandemic emergency has brought fresh scrutiny to Australia’s welfare system by experts and advocates, underlining long-standing criticisms of its weaknesses, triggering complaints of bullying and harassment, and providing fresh momentum for arguments for a system reboot.

The government intends to cut $860.4 million from the employment services budget in a change to the system beginning in July 2022 that will see job seekers having less face-to-face meetings with their providers.

Claims that jobs agencies are often unhelpful and sometimes bullying are not new – they have been around since the Howard Government privatised the unemployment services system in the 1990s. But with so many newcomers to JobSeeker as a consequence of COVID-19, so many uncertainties in the recovering jobs market, and so much pressure from the Federal Government to get people off welfare, there are signals those tensions are escalating.

“It just doesn’t seem like [the job agencies] are doing the job that they’re supposed to be doing,” Pendragon says.

In ordinary times, those on JobSeeker are required to engage with a job service provider every month if they want to continue to collect their entitlements.

Pendragon says Workskil did not explain at any point that he did not need to take its monthly calls when mutual obligations were suspended throughout the lockdowns. And when the government urged JobSeekers to apply for four jobs a month as the pandemic crisis eased from August, Workskil did not tell him this was optional. He discovered this by looking at the Centrelink forum on Reddit.

Responding to questions from The Citizen, Workskil said both it and the Department of Education, Skills and Employment told JobSeekers about the suspension of mutual obligations through social media, websites, telephone appointments, emails and texts.

Navigating the welfare maze through the pandemic proved challenging for newcomers and people with long experience of the system alike.

Sophie, who requested not to be identified, has been on JobSeeker and, before that, Newstart payments on and off for about 10 years, gaining a solid understanding of the rights and requirements of the system.

She says her case manager did not tell her when mutual obligations became optional during the pandemic, and that she was required to attend face-to-face appointments during periods of state three and four restrictions, which required that people stay home except for work and school, buying supplies, caregiving and exercise.

In February this year, she lodged a complaint with the federal Department of Employment’s complaints line accusing her case manager and provider of harassment and deceptive conduct. (She is, at present, not pursuing the complaint.)

“She [her case manager] would berate and laugh at me over the phone and threatened to cut my payments off pretty much every phone call she ever made to me,” she told The Citizen.

Her experience through the pandemic compounds her longstanding complaints about the system. “No job service provider has ever in the history of my 10 years found me a job,” she says.

“It’s so transparently clear that it’s just a complete rort at this point.”

In a recent report investigating the experiences of welfare recipients through the pandemic, Australian National University public policy specialist Dr Elise Klein and collaborators found that through the period in which mutual obligations were suspended and payments boosted, people spent more time looking for work.

Mental health and psychological wellbeing also improved, and recipients used the extra money and time to tool themselves up for employment through study or training, according to the findings.

“When they got rid of the mutual obligations we saw that it helps people,” says Dr Klein. “Life improved when [welfare recipients] didn’t have to engage with the punitive arm of the job providers.”

She argues the welfare system stigmatises those receiving payments and makes it harder to engage in the labour market.

On top of that, Dr Klein says there are not enough jobs, “so this whole assumption of mutual obligation often doesn’t actually reflect reality”.

With the pandemic recovery continuing in Australia and COVID welfare support measures wound up, the Federal Government recently suspended the ratings system for job providers, which allows JobSeekers to see how providers’ performances compare.

Senator Siewart says she’s concerned that this “sends a signal to providers that it’s easier to get away with stuff”.

But a Department of Employment spokesperson said the ratings system was suspended due to a lack of “robust and reliable” data during the pandemic period.

He said there was a customer service line to receive and investigate complaints about providers. Additionally, “the Department requires that all contracted providers establish and publicise a feedback process for customers, including complaints about their organisation”.

Announcing these changes, the employment minister at the time, Senator Michaelia Cash, said most jobs lost during the pandemic had returned, and the changes would be an incentive for welfare recipients to transition off payments. She also said the government would increase auditing of job service providers.

But Kristin O’Connell, former spokesperson for the Australian Unemployed Workers Union, says the ramping up of mutual obligations has “nothing to do with the labour market”, given the number of people still out of work and relying on JobSeeker.

Job service providers rather than their clients should be required to explain themselves, she argues.

She says there is an “incredibly low strike rate” of providers achieving their primary task – helping people find employment. A 2019-2020 outcomes survey released by the Department of Employment found less than half of people on JobSeeker were satisfied with the help they received from their provider to find work.

As for Pendragon, he has not yet found employment. He has instead enrolled in a master’s degree in history at La Trobe University. It includes a small stipend, so he recently went off JobSeeker even though his income is lower than he would like. This means he will avoid the reintroduction of harsher mutual obligations, and most significantly – having to engage with his provider.

“The whole system is built on bullying people into finding their own job, or putting them into roles that they don’t really suit, but they’ll get,” he says. 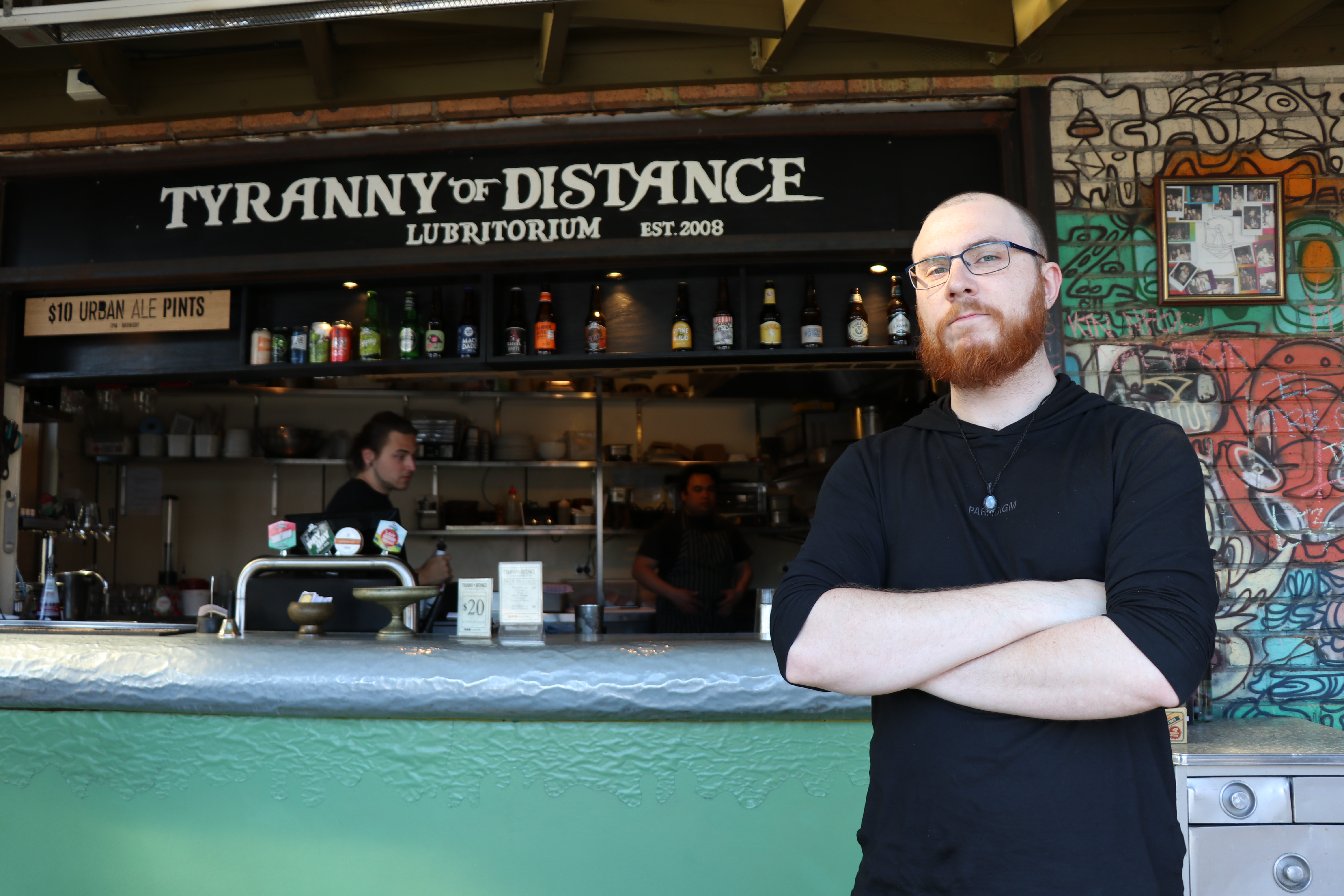 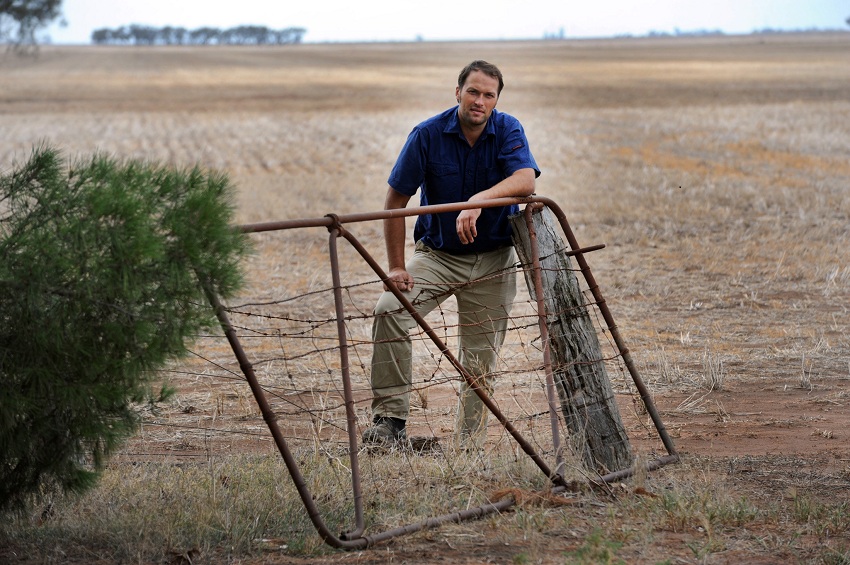 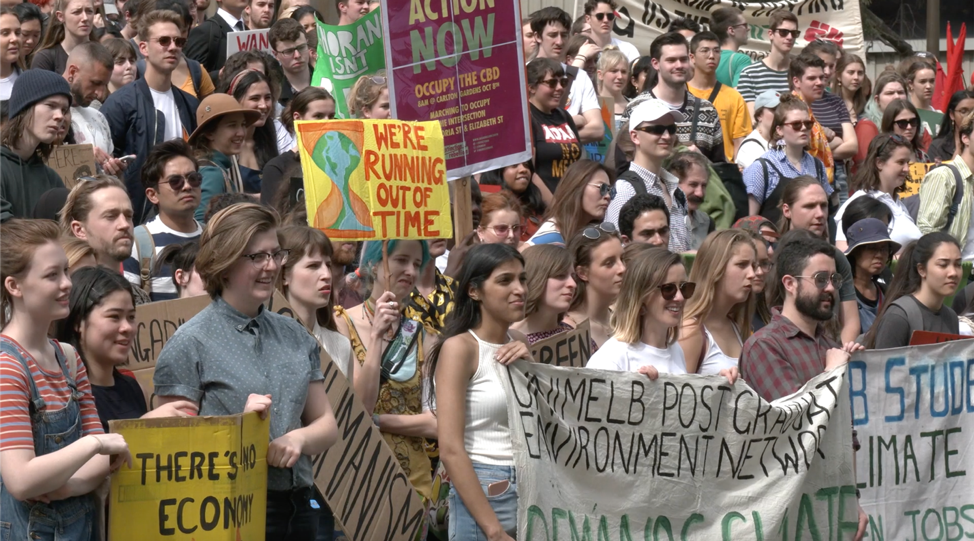 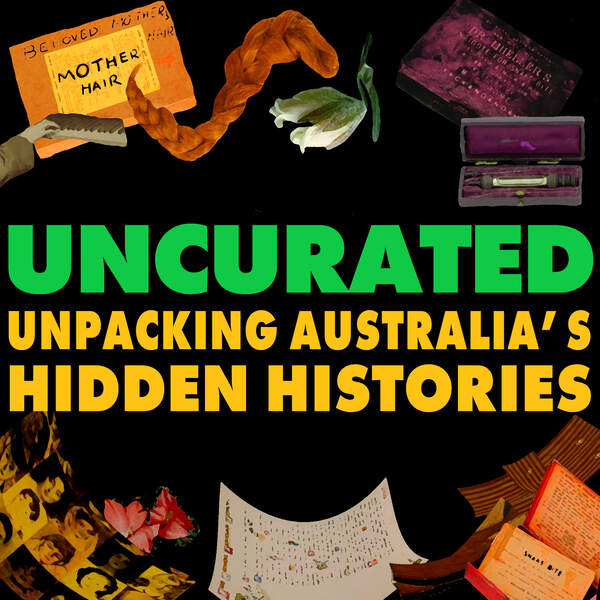