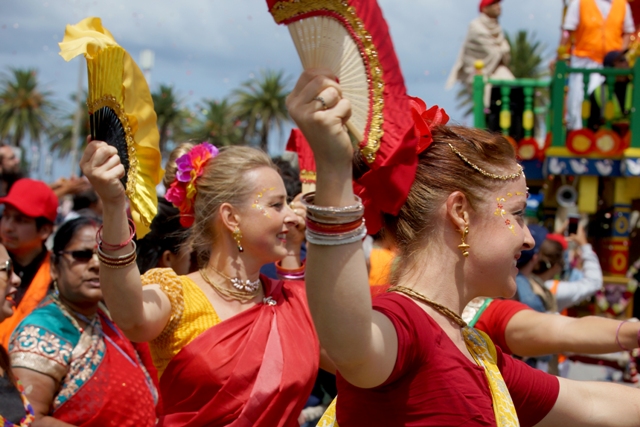 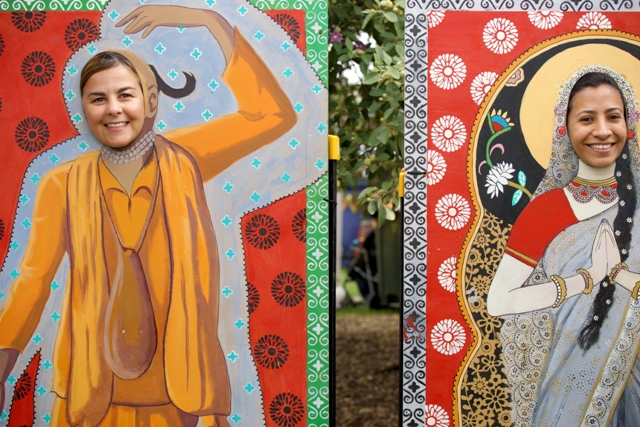 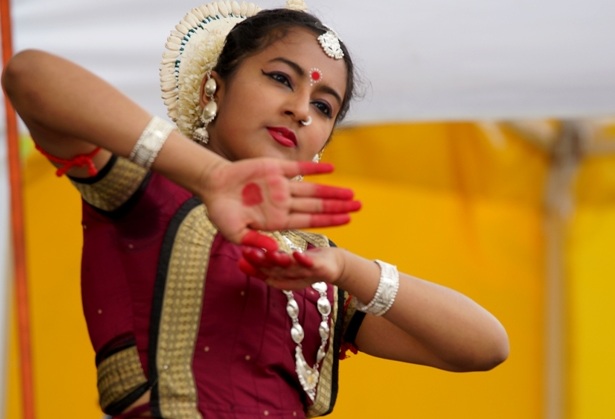 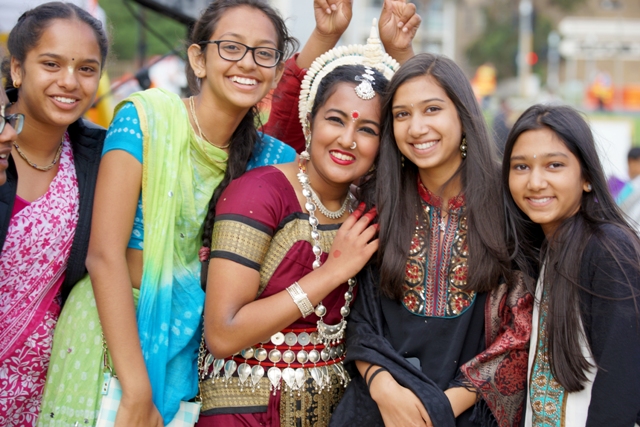 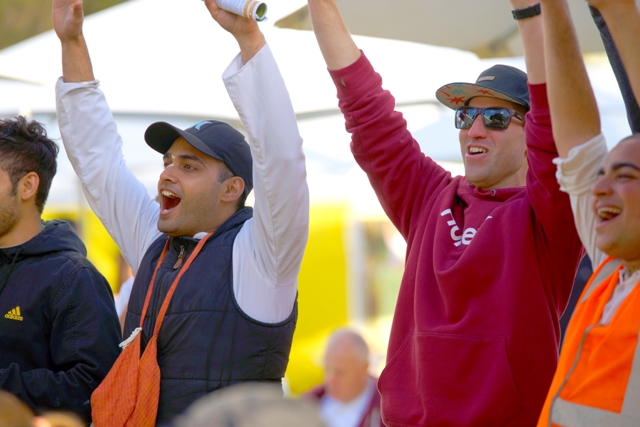 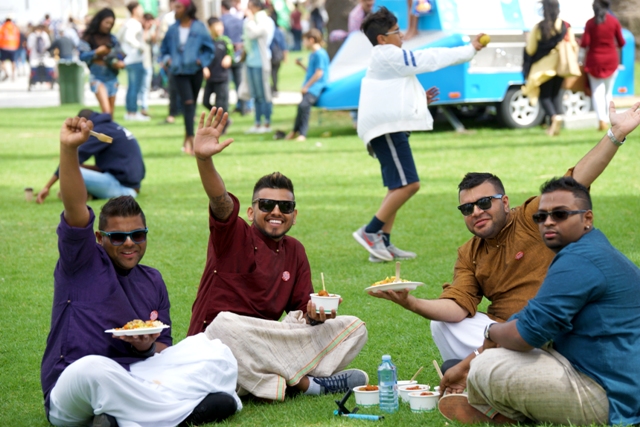 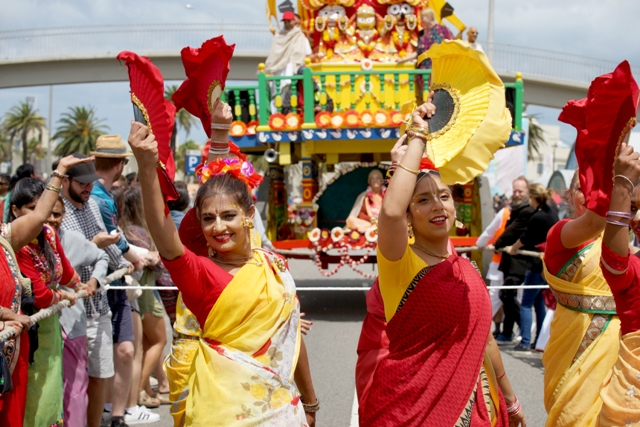 Garlands have been pinned to the wheels of the chariot and curries seasoned to perfection for prasadam (a religious offering), while Krishna’s idol is adorned with jewels for public viewing.

The occasion is Rath Yatra, or Chariot Festival, organised by the International Society for Krishna Consciousness (ISKCON).

Held annually to emulate a similar large-scale Rath Yatra at Puri, in India, the festival attracts thousands of Australians to see the Hindu God Krishna — or Jaggannath (Lord of the Universe) — step out of the sanctum of his temple in Albert Park onto the streets of Melbourne for his darshan (viewing). 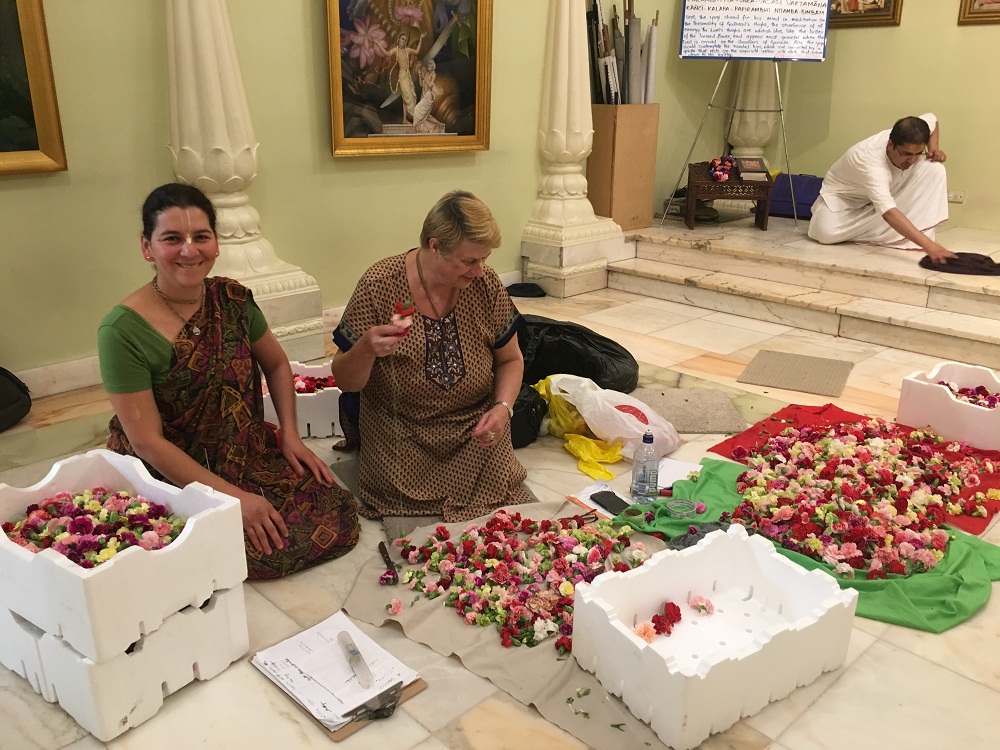 This year, a record 25,000 people took part in the yatra at St Kilda’s Catani Gardens, reflecting Hinduism’s rising popularity in Australia, which is expected to be confirmed in the latest Census as the nation’s fastest growing religion.

The trend is largely explained by migration, with increasing numbers of Indians settling in Australia, and particularly in Melbourne.

But locally-born Australians, too, are gravitating towards the world’s third biggest religion, according to local followers.

“The Hindu way of life, with vegetarianism, karma and spirituality as its tenets, has never been more popular in the western world,” says Bhakta Dasa, the national communications director for ISKCON Australia.

The trend that first emerged in the 2011 Census is expected to have continued in the years since, according to both the Australian Multicultural Foundation and the Hindu Council of Australia.

They point to the four-fold increase in the number of Indian-born residents in the nearly two decades to June 2014 as a key driver. 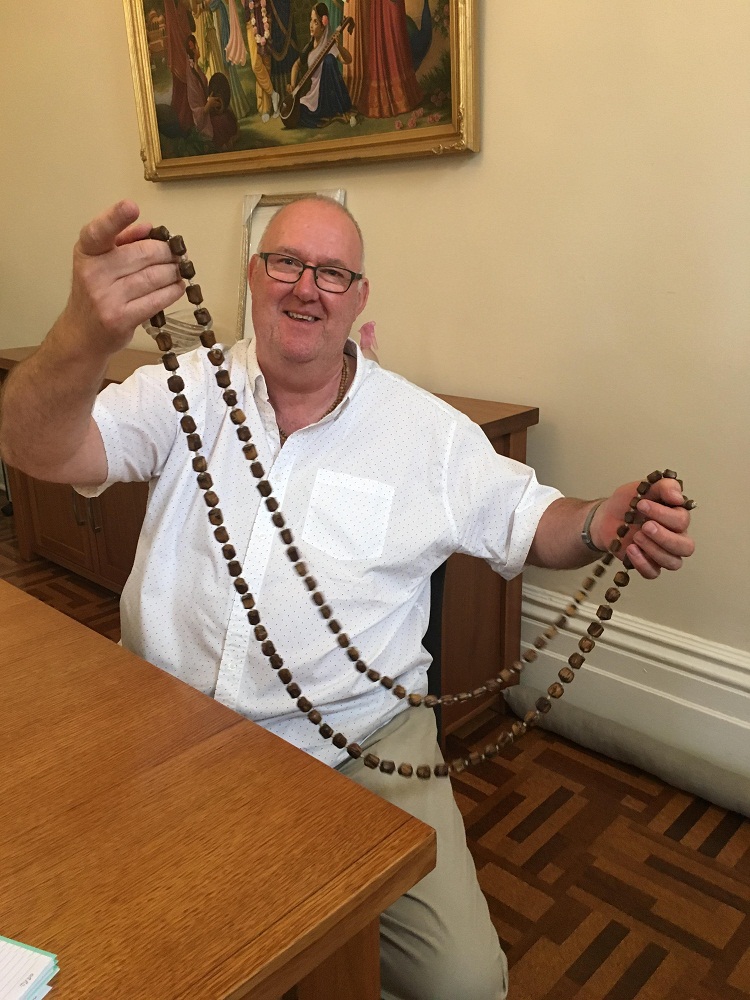 Census watchers, meanwhile, predict that despite the growth in the number of Australians nominating Islam as their religion (predicted to have risen from 2.2 per cent to 2.6 per cent of the population), Hinduism stands to overtake it (2.7 per cent).

Mr Dasa cites the increasing numbers of Indian students graduating and staying on in Australia as permanent residents as a key to the rising popularity of Hinduism.

Drawn to the faith around the same time that the Beatles travelled to the Indian holy city of Rishikesh to study transcendental meditation, Mr Dasa says there is a growing segment of the Australian population that finds Hinduism fascinating.

Indeed, ISKCON, an international organisation established in 1966 to promote Hindu scriptures and the principles of Hinduism, was predominantly a Caucasian movement when it was started in the mid-1900s. Over the years, through shifting immigration, ISKCON has come to boast a membership of 60,000 – 70 per cent of whom are Hindus from overseas and the rest mostly Anglo Australians.

Mr Dasa, formerly the Reverend Albert Lange, trained to be a priest in Papua New Guinea but became disillusioned with Christianity.

“The Hindu way of life, with vegetarianism, karma and spirituality as its tenets, has never been more popular in the western world.” — Bhakta Dasa, ISKCON Australia

“I was an atheist before I found my truth in the Hare Krishna movement,” he explains.

This year’s chariot festival was a huge success, with a Vedic village created in the gardens of St Kilda hosting activities such as Bhagwad Gita readings, face painting, and traditional and western dance performances.

Mr Dasa says many people attend the festival to get a sense of its purpose and to savour the free food (prashadam).

“When you pull the ropes of Krishna’s cart you are inviting the god to your heart and re-establishing the connection. Irrespective of their belief, we let everyone have a go,” he adds.

ISKCON’s Albert Park headquarters is not the only temple catering to the religious needs of Hindus in Melbourne. Of the 51 temples across Australia, 19 are located in Victoria and belong to different sects of Hindus that worship different gods such as Ganesha, Durga, Hanuman and Shirdi Sai Baba. 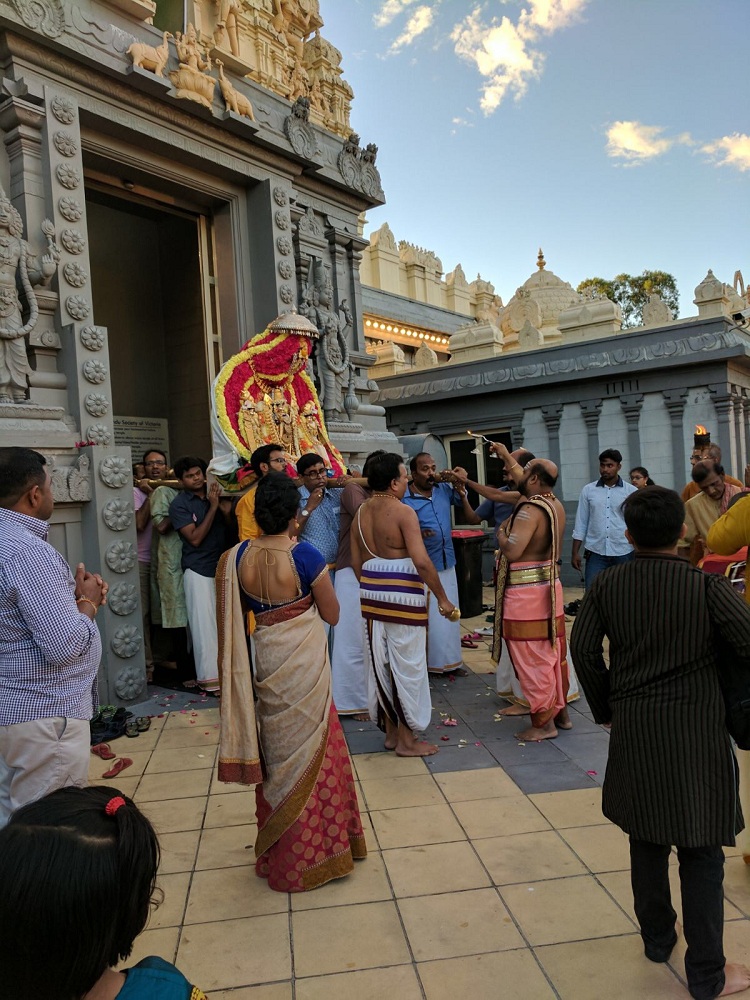 The foundations for the Shiva Vishnu temple, one of Australia’s oldest and biggest Hindu temples, were laid in 1988 in Carrum Downs, in Melbourne’s south-east. Situated on almost six hectares of land, the temple is visited by more than 100,000 people a year.

Constructed predominantly by Hindus from India and Sri Lanka, the temple offers a religious home to many migrants, including those from south-east Asian countries such as Singapore, Malaysia and Thailand, as well as Fiji.

Adapting to a western world has helped dissolve the boundaries created by traditions and caste that still exist in India, where the 5000-year-old religion of Hinduism originated.

In Australia,Shiva (the destroyer) and Vishnu (the creator), two Hindu gods who never cross paths in the temples of India, not only share a common home but also grant Darshan (an audience) to people from all walks of life irrespective of their caste or religion, or the colour of their skin.

“We just needed a place to worship,” says Sivananthini Krishnamoorthy, a migrant from Sri Lanka who has been a part of the team that saw Shiva Vishnu temple take shape from humble beginnings in a small shed. “And we would bring food from home as prashadam [a religious offering] and sing bhajans [hymns],” she says.

Mrs Krishnamoorthy, who has visited many holy places across the world, says the Hindu temple at Carrum Downs is more than a place of worship for the Hindu community of Melbourne.

She says the temples of Melbourne had helped her family to retain a connection to their culture and tradition.

But she also finds it amazing that many white Australians also visit the temple and are learning Vedic Hindu scriptures in Tamil.

“Something that I never did as a child, even in Sri Lanka,” she adds. 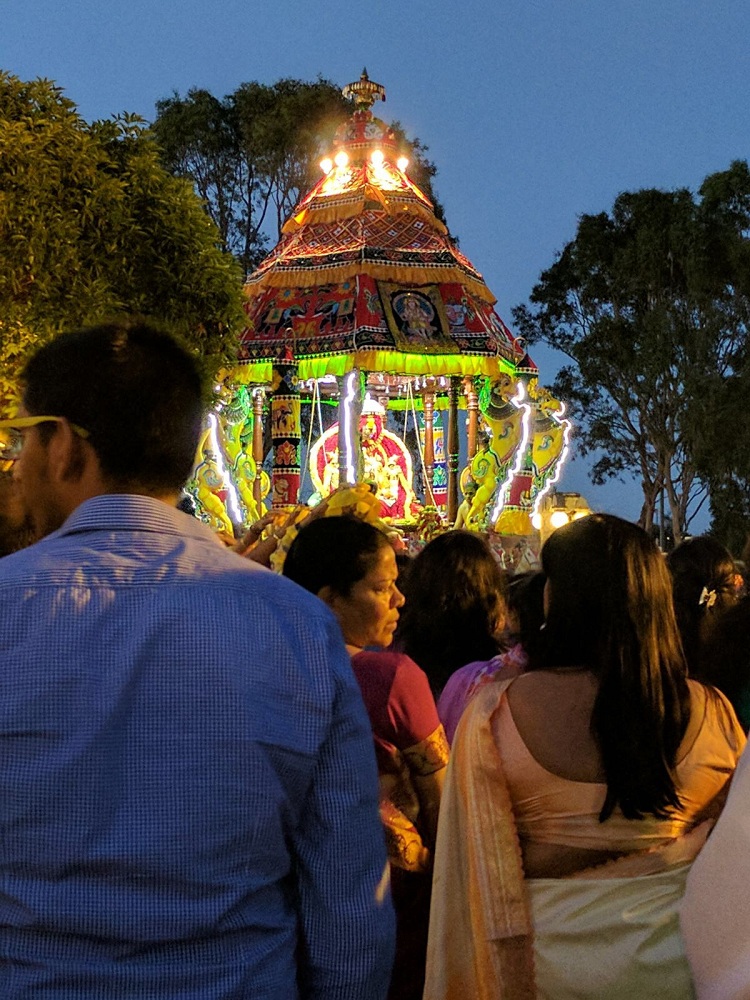 Most Hindu temples of Melbourne come under the umbrella of the Hindu Organisation of Temples Association, which engages in many interfaith activities and provides spiritual services to Hindus across Australia.

The temple premises often become celebration venues for weddings, naming ceremonies and festivals such as Diwali, Holi and New Year. Traditionally, it is a first stop for Hindus on the arrival of a baby, or when moving into a new house, or buying a car. Students and job seekers often flock there before a major exam or interview, a tradition that seems to have crossed continents.

Mrs Krishnamoorthy, a weekly visitor, says her faith in the temple and the deities goes deeper than paying the cursory Diwali or New Year visit to greet the gods.

“I have prayed there in my times of need and things have always worked out. Now I pray to thank the God for all that I have.”

ISKCON’s Bhakta Dasa, who represents Australia’s Hindus on the Faith Communities Council of Victoria, says that with the increasing religious needs of the Hindu population it became imperative to work under a unified body.

The Hindu Council of Australia liaises with government, while reaching out to other organisations and institutions, and seeks fair representation of Hindus in the media.

Makrand Bhagwat, a Victorian member of the Hindu Council of Australia, says the council had a major hand in adding Hinduism as a religion option in last year’s Census.

“[The council], along with its partner organisations, ran a campaign in our networks to encourage the Hindu community to exercise this option,” he says. “We are very keen to see the outcome of the 2016 Census . . . and pretty confident that this [growth] trend will continue.” 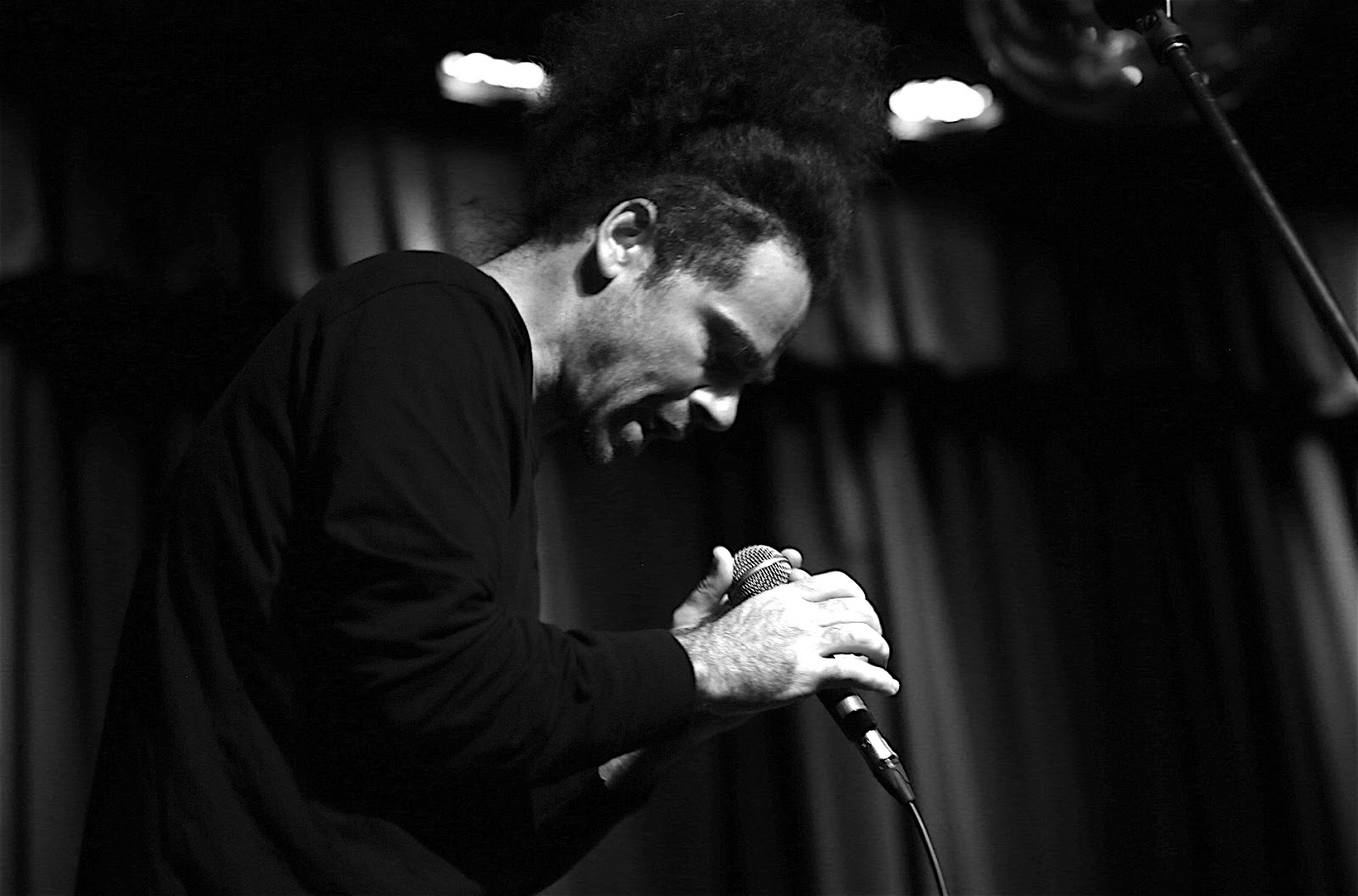 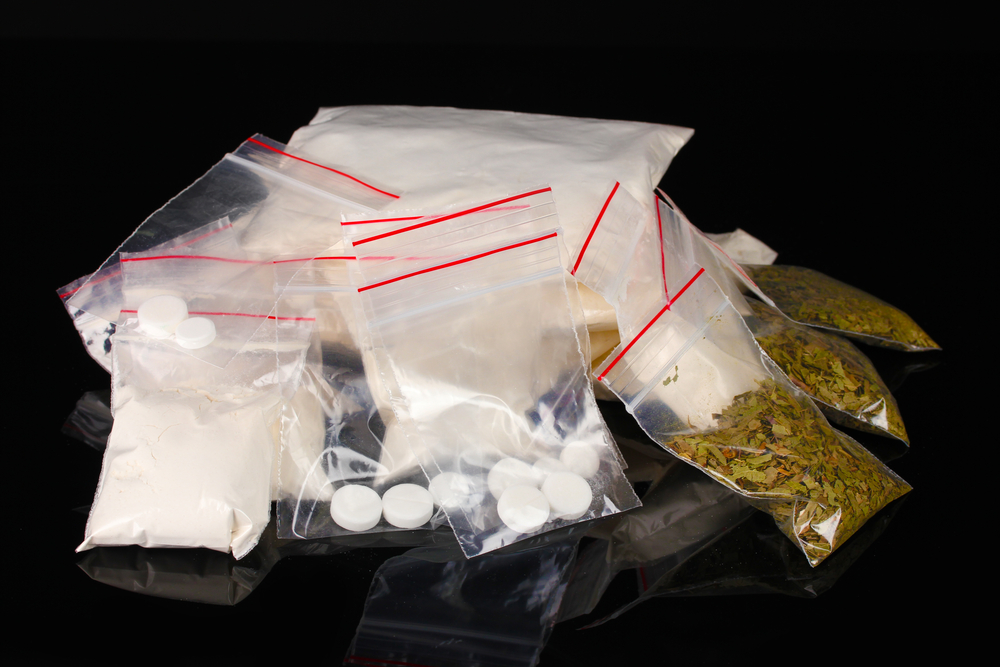 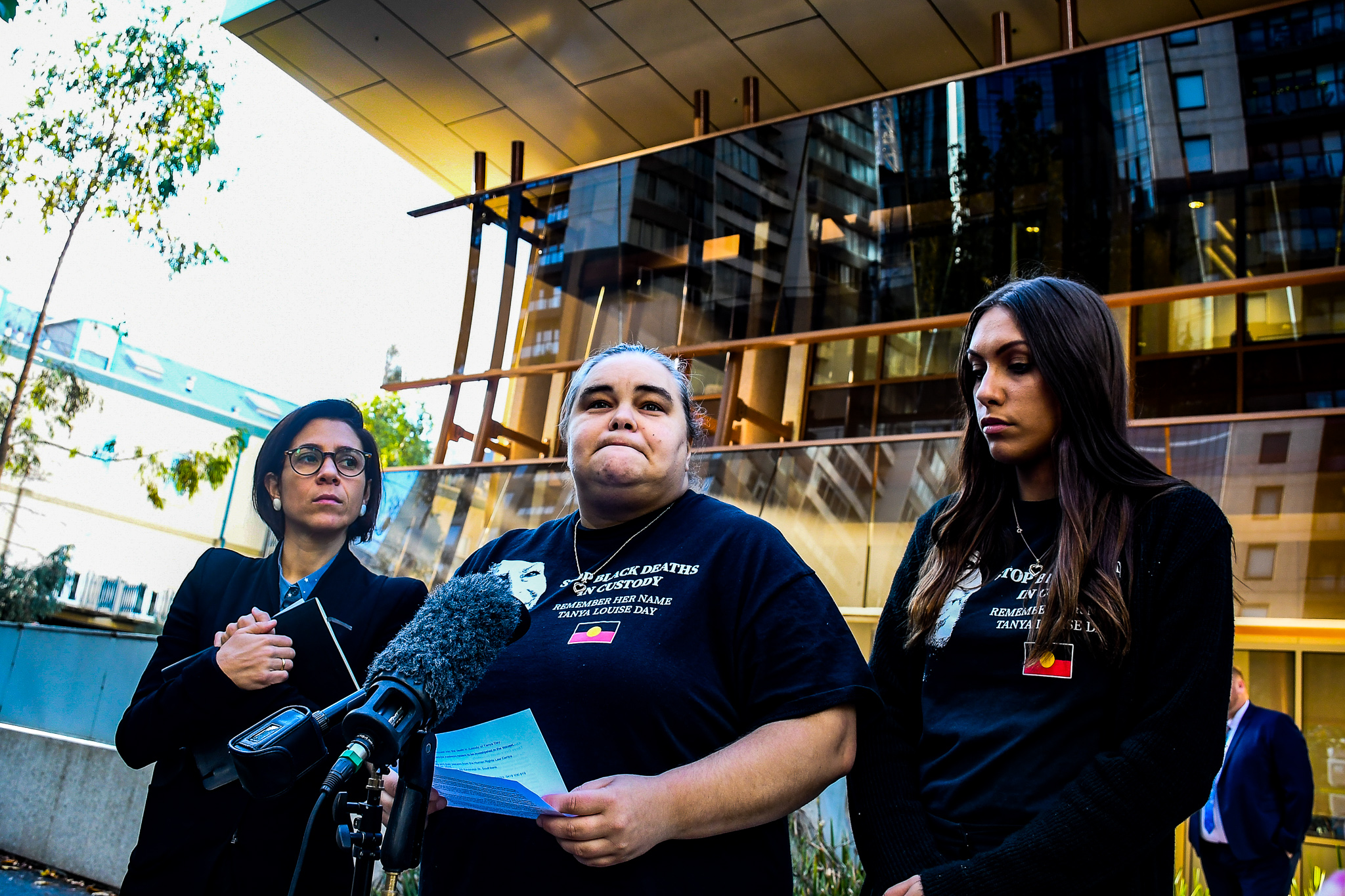