The impacts of the climate emergency are already being disproportionately felt by women and girls around the world. Activists marching for climate action in Melbourne put the spotlight on their plight. Jack Banister reports. 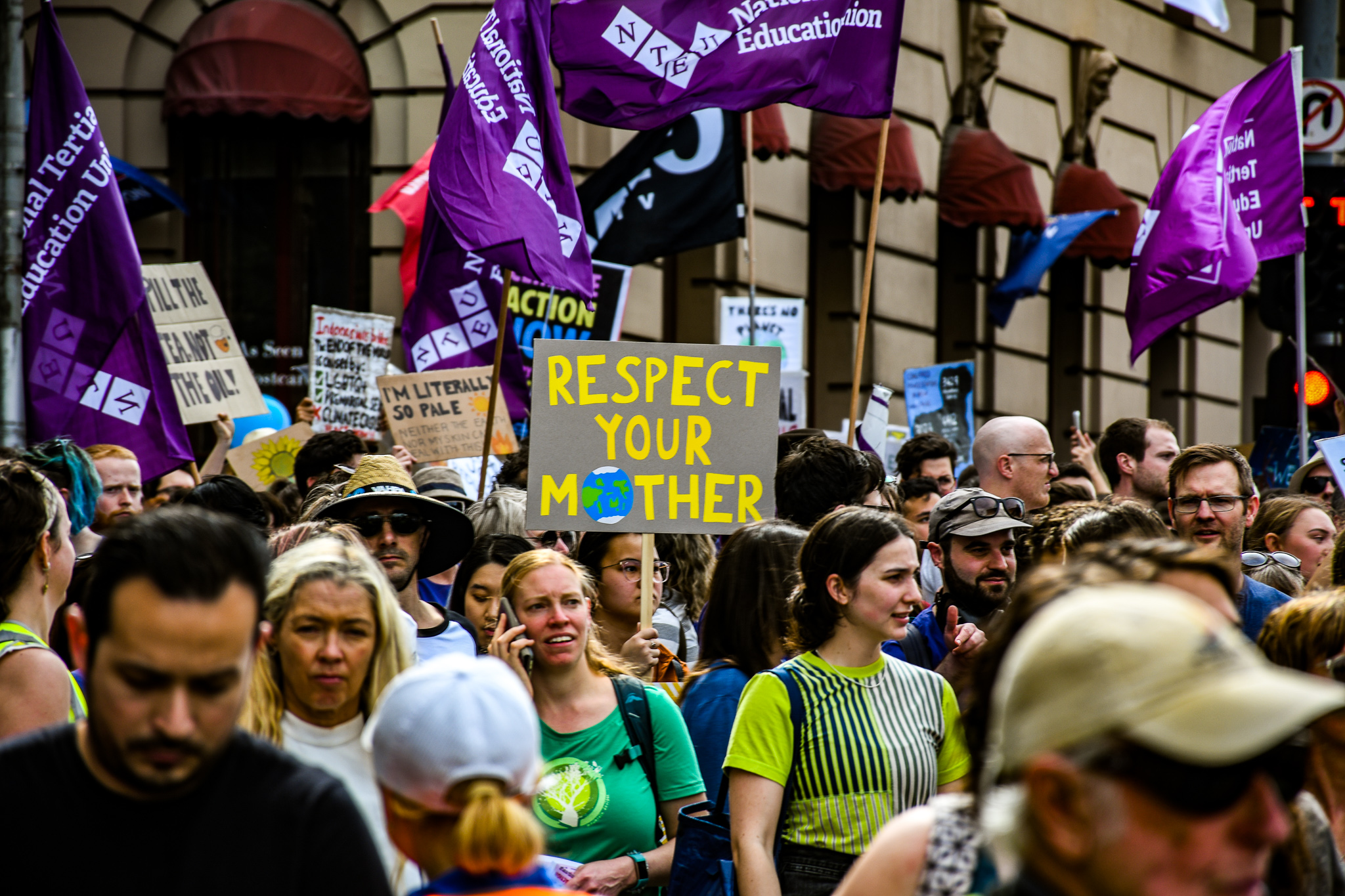 It’s unseasonably warm in Melbourne on Friday September 20, the day citizens from around the world take to the streets to call for action to tackle the climate emergency. A pair of young siblings garbed in homemade “Stop Climate Change” t-shirts are playing in the mud in the dried up pond in the Treasury Gardens in central Melbourne.

Their fellow protestors are starting to trickle down from the CBD in school uniforms, high-vis vests and “Stop Adani” t-shirts. There are women garbed in the flags of various Pacific Island nations, and the occasional suit. On a wooden bench, Kara Stuart – an activist, and a community engagement coordinator at Casey Tech School – has pinned up banners calling all “Women for Climate Justice”, making her easy to find. She’s already accompanied by a small posse of mothers and grandmothers.

Stuart coordinates the Women’s Climate Justice Collective, which focuses on “the intersection between gender and climate” and also aims to include more women in the climate movement.

The group organises different events – from tea and sign-making sessions before protests, to camps to discuss the best ways to take action on climate change – but today the aim is simply to draw more women away from their desks and out to the Global School Strike 4 Climate.

On the ground, there’s a box of textas, plenty of spare cardboard, and a few signs already drawn up with slogans like, “Change the system, not the climate”, or “Climate change is a women’s rights issue”.

A United Nations fact sheet says that “women are more vulnerable to the effects of climate change than men” in many contexts, and Stuart quickly reels off ways women will be specifically hurt by inaction when The Citizen approaches her.

She says that women will be disproportionately affected by a variety of climate-induced health impacts, forecast by the World Health Organisation, because of their traditional roles within the home.

“Women are in the majority of caring roles – paid or unpaid caring roles – so they’ll take on all the health impacts of the children, and the elderly.”

The recent Intergovernmental Panel on Climate Change’s report highlighted more natural disasters more often as one of the major risks if global emissions are not cut, and that has ramifications for women, Stuart says. Throughout the day, women of all ages joined Stuart’s crew. Picture: Jack Banister

“It’s going to be more difficult for women, pregnant women, or women who might not be able to access reproductive health services, if there’s a bushfire or a flood,” she says, before turning her focus to how extreme weather increases instances of domestic violence. This was demonstrated in rising rates of violence against women in the aftermath of Cyclone Pam in Vanuatu in 2015.

“There’s a lot of data, specifically showing increase in family violence after natural disasters – “ she stops and corrects herself “ – Man-made disasters these days, because they’re not really natural anymore.”

The Australia Institute’s Climate of the Nation report, which was released early this week, showed that women are already more concerned about climate change than men.

It found that 79% of women in Australia were “very” or “fairly” concerned about climate change, compared to 70% of men. Women were also more likely to respond that climate change is already increased heat waves, the destruction of the Great Barrier Reef, and more bushfires.

One of the first women to join Stuart at the pond is young content creator Nicole Farrell, who says isn’t surprised by the new numbers.

“We [women] care about children, the future … if that quality of life does dip, then women are more at risk of abuse and being hurt,” she says.

Part of the reason, she says, is social structures that stop men expressing their concerns and feelings about social issues.

“I think there might be a bit of gender bias on a male perspective … I think that women tend to be able to vocalise their feelings a lot more than men can. That’s a societal issue,” she says.

Harper Dawson, a 17-year-old high school student, found the group on Facebook when she was looking for like-minded protestors to hang out with. She joins the group’s regular members as the crowd around the pond starts to swell. “We [women] care about children, the future … if that quality of life does dip, then women are more at risk of abuse and being hurt,” says Nicole Farrell. Picture: Jack Banister

“I’ve never really thought of climate change as a women’s issue,” she says. “Seeing it spoken of as a feminist issue is really interesting to me. It’s this new angle I’ve never thought of, and it’s close to home for me as a young woman.”

Like Dawson, Kate Webster – a mother of two – came along to find like-minded protestors. Her kids – 21 and 24 – left to find their own friend upon arrival, so she joined Stuart’s women’s group by the pond.

Shortly after the official start time of 2pm, organisers announced that more than 100,000 people had turned out to protest.

The Citizen is a participant in the international journalism project Covering Climate Now, a global collaboration of more than 220 news outlets to strengthen coverage of the climate story.