Mark Triffit and Nicholas Reece are both former senior political advisors and, these days, public policy and politics experts at the University of Melbourne. They gave their take on unfolding developments in Canberra to reporters Silvi Vann-Wall and Jeremy Nadel. Mark Triffit – What’s your understanding on why this leadership crisis has happened? Is it surprising?

In one sense yes, I am surprised, because it’s only been three years since the last one, and it’s the fourth in eight years. On the other hand – no, because it’s been clear for some time this was going to happen. There are clear divisions between conservatives and moderates of the Liberal party. It was fairly low level until it came to a head this week and exposed the cracks in the party.

What of Peter Dutton’s suspected breach of the Constitution (section 44) over his stake in a child care centre business? Do you think he should be referred to the High Court?

I’m not an expert on that – it’s certainly put a major question mark on his eligibility so of course the issue is now front and centre of the leadership spill, and Dutton is seeking to play it down, naturally.

What do you think this will mean for the future of Australia’s climate policies? And the Paris Agreement, to which Australia was a signatory?

[Climate policy] is one of the signature issues and causes of deep political divides over the past decade. It highlights how difficult and contested climate policy is in Australia. I mean, it’s been the most contested issue in the Liberal party for the past 10 years. It was the same issue when Turnbull lost the leadership in 2009, and it will be an issue for some time to come.

Is there an argument or concern that this spill may encourage ultra-conservative groups like the Alt-right?

Democracy encompasses all sorts of views. What the spill signifies is that the conservative side of government are a major force to be reckoned with. If Dutton is PM, conservatives will dominate the Liberals. Already they’ve been able to mobilise quickly over this week and could now be responsible for the next PM.

Is it a full blown constitutional crisis? Should the Governor General intervene?

This government still has the majority. Unless the new PM wants to call an election, I think it will be business as usual.

With Julie Bishop now in the ring as well, who do you think will be our next PM? Why?

It’s such a fluid, unpredictable environment. Given his support from Matthias Corman, Michaelia Cash, and Mitch Fifield, the strongest likelihood [for PM] is Peter Dutton.

Nick Reece – What do you think of the Liberal leadership challenge?

I would say that Australian democracy has reached yet another low-point. The Liberal party of Australia has plumbed new depth. Australia has the inglorious title of being the coup capital of the world. Since 2007, Australia will have had seven Prime Ministers! And that is no way to run a country. Even the Italians will be laughing at us. These events should be cause for reflection on the state of our democracy and what we can do to provide stability and renew the strength of our democratic institutions.

How do you think the spill will affect the Liberal Party’s policies?

In the end the leadership challenge was not about policy. After all, Malcolm Turnbull had conceded everything the conservatives were looking for. It was about personality and personal hatred that go back decades. The fissure and raptures in the Liberal Party caused by these events will take years to heal. This is a battle for the heart and soul of the Liberal Party and whether they are a conservative or a more moderate Liberal Party or if they can indeed accommodate the two separate philosophical leanings within the one party.

What do you think this means for next year’s election?

I would expect a victory for Labor and Bill Shorten at the next election is now almost assured. If you can’t run yourselves, how you can you be expected to run the country? The Liberal Party is a dysfunctional train wreck.

How do you think future generations will look back at this episode of Australian politics?

I think this will be looked back as a dark chapter in Australia’s democratic and governing history: that a nation has a managed to succeed not because of good government but in spite of bad government. It’s a reminder of the importance of our public institutions like the public service and the judiciary and organisations like the reserve bank compared to the circus which is the Federal Parliament. 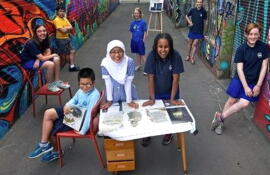