From rainbows to realpolitik, young voters set to make their voices heard

The next Victorian government will be determined this weekend. Young voters may have a defining influence on the result, experts say. Reporter Jack Banister checks in to see which way they are leaning. 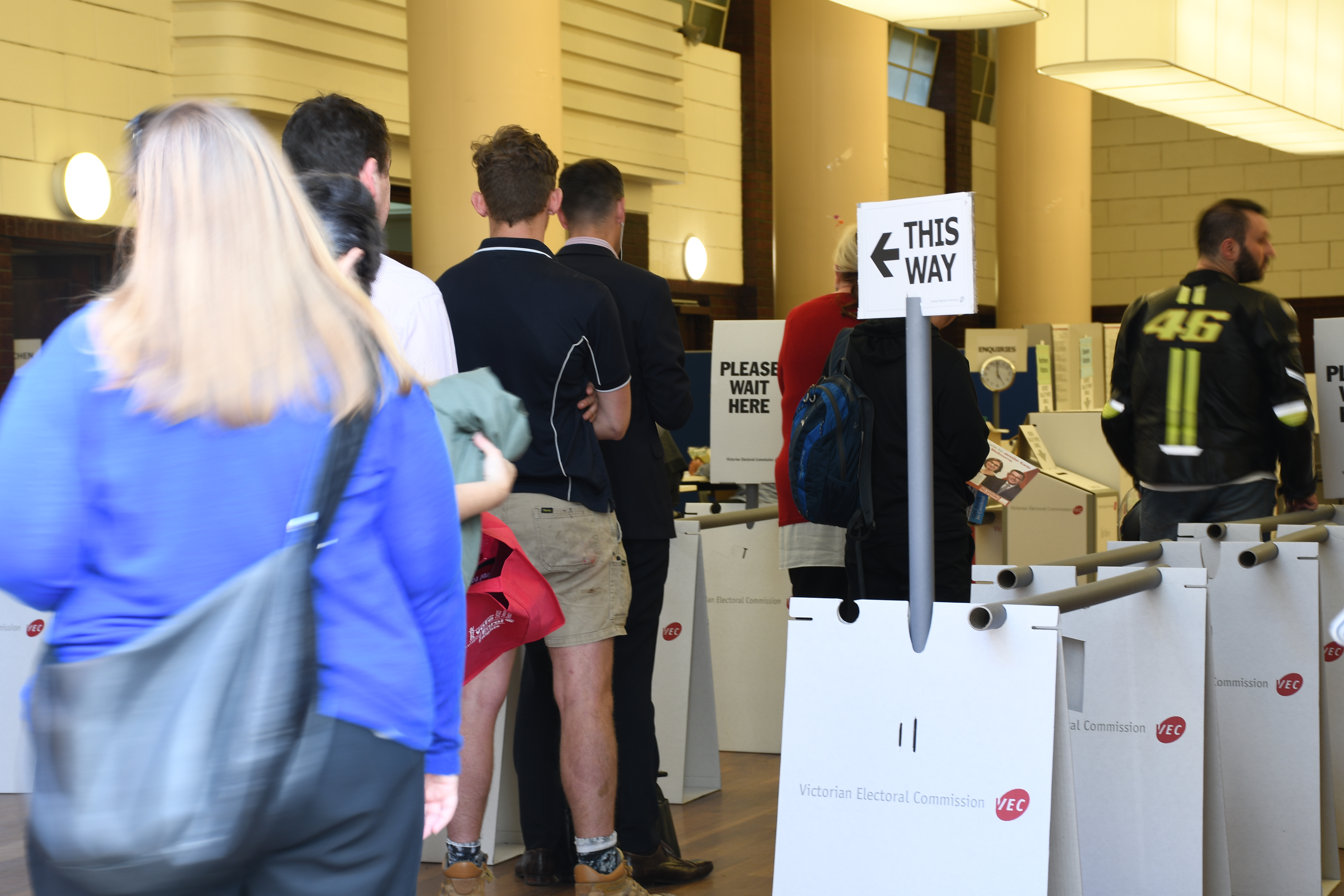 In the countdown to the Victorian state election, and with many voters choosing to get in early, navigating the sea of campaigners waving how-to-vote cards to get down to the business of democracy can be a daunting task.

In grungy inner-northern Brunswick, black-shirted campaigners for the Victorian Socialists have been roving widely around Sydney Rd, pushing their ticket out to early voters making their way to the pre-polling booth. They hope the gambit will help them in their bid for an upper house seat.

They are feeling particularly emboldened in this neighbourhood, where nose rings, tattoos and questionable haircuts have long since overtaken the conservative stylings of last generation’s working class. It will be the scene of one of the make-or-break contests in this Saturday’s poll.

In the lower house, the youth vote will be crucial in four hotly contested inner-city seats. Labor holds Brunswick by 2.2% and Richmond by 1.9%, while the Greens hold Northcote by 5.6%, and Melbourne by 2.4%. Whether that ledger remains square at two seats apiece could decide whether Premier Daniel Andrews will continue to govern in majority.

One of those handing out how-to-vote cards for the socialists is 22-year-old Nahui Jinenez-Ludekens. She’s already a political veteran, having organised various protests, especially in opposition to the far-right, and combines her studies at RMIT with work as a lighting technician and as an activist.

Ms Jinenez-Ludekens sees rent prices and transport as the most important issues at this election.

“Basically, you can only live in the inner-north if you have four or five housemates,” she says.

“Living in Coburg, you see how packed the trams are in the morning. As a socialist, you don’t see it as being because of migrants or too many people, but you see it as a political issue because governments don’t fund infrastructure,” she says.

According to Dr Aaron Martin, an expert on young people and voting at the University of Melbourne, young voters like Ms Jinenez-Ludekens reflect a broader global trend towards more youth engagement in politics. Social media has made it easy for young people to organise, and they’ve also been mobilised by what Martin calls “cynicism chic”.

“That is basically this default position that politicians are out for themselves and corrupt and self-interested. I don’t think people entertain the possibility that politicians have a really difficult job,” Dr Martin says.

According to Dr Martin, there may be other interesting and possibly electorally defining things going on in Victoria this campaign as a consequence of last year’s marriage equality vote.

Historically, young people are less likely to be enrolled to vote than older people. But many young people were persuaded to enrol to have their say on marriage equality, and that raises the possibility of a boost in youth engagement and participation in this state election, Dr Martin says.

“I think the plebiscite will ultimately lead to more young people being on the electoral roll, so I’d imagine that turnout among young voters will be higher as a consequence in subsequent elections,” he says.

Psephologist Dr Adrian Beaumont agrees. “In two party contests between Labor and the Greens, the youth vote will favour the Greens, so it could have up to a 0.5% impact in Brunswick, Melbourne, Richmond and Northcote, due to the marriage equality vote,” he says.

The Northcote by-election in November 2017 was an early litmus test of the electoral landscape post-plebiscite. Greens MP Lidia Thorpe took the seat from Labor, the first time it has changed hands since its inception in 1927. At the 2014 state election, 18-25 year olds represented 9.9% of the Northcote electorate. In 2018, they’ll represent 10.9% of that electorate.

In Brunswick, there’s only been a 0.1% increase of 18-25 year olds as percentage of the electorate, and in Melbourne and Richmond that number has actually decreased, by 0.2% and 0.5% respectively.

At the early voting centre at Drill Hall, in the middle of the mess and noise of Melbourne’s endless CBD renovations, 25-year-old actor Jordan Barr is handing out material for the Greens.

She’s hoping that a spate of recent controversies around candidates for her party won’t nullify their usual popularity with young voters. Greens candidate for Footscray, Angus McAlpine, had to apologise for lyrics about date rape from a song he released in 2010 as a part of the hip-hop group Broken Aesthetiks.

Less than a week later, a staffer for Lidia Thorpe resigned because of a series of offensive tweets about feminism, paedophilia and Muslims. In October, upper house candidate Joanna Nilson resigned after making comments on Facebook about how to shoplift, as well as a derogatory comments about a female Liberal senator.

Ms Barr concedes that a lot of people her age are “unenthused” by the Greens candidate in Richmond, Kathleen Maltzahn, because of her past support for the Nordic model for criminalising sex work. Maltzahn released a statement in May withdrawing her long-time support for the policy, which is favoured by the Liberal party and criminalises the buying of sex rather than the selling of it. The Greens policy is to decriminalise sex work.

When Ms Barr was a student at Carey Grammar School in Melbourne’s eastern suburbs, her political leanings went against the grain. Most of her friends were raised to vote Liberal.

“I grew up with a very left-leaning family. My parents have always, until recently, supported Labor. As much as people are moulded to vote right, I was moulded to vote left,” she says.

Ms Barr says she eventually convinced her parents to start voting for the Greens. Her family’s awareness of climate change and Indigenous rights informed that decision. She’s also noticed that some of her Liberal friends, who were brought up to despise Labor, have bypassed the party altogether and started voting for the Greens.

Ms Barr’s main concerns are over-development and rent prices, and she thinks the Liberals are coming up short on both of those issues. “A lot of people voting in this area (Melbourne) are renting, and are students. I think that’s why the Liberals are losing their votes,” she says.

On the lawns of Melbourne University, asking students about their engagement in the poll this weekend, some students are reluctant to venture opinions, citing their lack of knowledge of the issues in play. A pair of male students in their early 20s, who chose not to be named here, say they’re not disengaged, they’re just too busy to follow the daily political beat.

Others, like 25-year-old Harley Smith, are more forthcoming. Mr Smith combines his studies with running his own drafting business.

“I’ve always been engaged in politics, even in school. That’s probably come from my parents,” he says.

Mr Smith is still to vote. Asked about the problems plaguing various Greens, including Mr McAlpine’s controversial rap song, he is circumspect.

“It’s a tricky one. Every party has there, sort of, internal beast, and all that sort of stuff gets brought up around election time. I don’t agree with what he’s done, but I can see that people can move on and move forward,” he says, before going on to say that an issue like McAlpine’s wouldn’t be enough to change his vote.

That doesn’t mean he’ll necessarily be choosing the Greens, though. Mr Smith cites the Andrews government’s pledge to build the Suburban Rail Loop – which would connect the airport with Melbourne’s eastern suburbs, and would take an estimated 200,000 cars off the road each day – as evidence of their long-term vision.

“It’s good to see a governing party with a vision that extends beyond their four-year term in office,” Mr Smith says. Words and pictures by Wing Kuang