Parliamentary proceedings have been cloaked in Christian symbolism for more than a century, but some Victorian MPs are in a spat over whether that should continue, reports Scott Tibballs.

At the beginning of each sitting day on Spring Street, the Speaker of the Legislative Assembly reads out the Lord’s Prayer — a tradition dating back to the first days of the Victorian Parliament.

A roll call taken during the prayer would reveal that rarely are all 88 MPs present, but it’s the absence of two in particular that appears to have triggered a minor storm in the teacup that is parliamentary procedure.

MPs are not compelled to be present for the reading of the prayer or, for that matter, any other part of a sitting day. They are free to enter and leave the chamber as they please, with only a few caveats pertaining to when the doors are locked, usually for voting.

But two Victorian Greens MPs have been making a conscious decision to be absent during the reading of the prayer, taking their seats only after the Speaker has delivered his ‘Amen!’

And this week, the Greens Member for Melbourne, Ellen Sandell, is expected to take that objection a step further by putting a motion calling for the tradition to be reviewed, and possibly axed, arguing that a Christian prayer for the parliament of a multi-faith, multicultural Victoria is anachronistic.

Ms Sandell says she hopes a more modern alternative can be found, likewise to be read by the speaker. While removing the prayer is long-standing Greens policy, the Greens MPs have made no attempt recently to do so: their current action is seemingly being taken in light of the Liberal MP for Kew, Tim Smith, having taken offence at their intentional snub.

Last Thursday, Mr Smith brought a point of order immediately following the reading of the prayer to blast Ms Sandell and her colleague, Prahran MP Sam Hibbins, for what he called “undergraduate protest politics”.

“The members for Melbourne and Prahran have been engaging in a conceited pattern of behaviour by boycotting [the Speaker’s] procession into the chamber and the prayer,” he told the House.

In requesting a formal position on the boycott from the Speaker, Telmo Languiller, Mr Smith has thrown down the gauntlet to the Greens, presumably in an attempt to force the issue and require MPs to be present in the chamber for the prayer regardless of their personal positions.

The Greens have happily taken up the challenge, marshaling the subsequent media coverage to make their opposition to the prayer clear by seeking an alternative.

So, is Victoria out of kilter with the rest of Australia? In fact, excluding the ACT, all other parliaments in Australia include opening prayers on sitting days. They range from a short, religiously vague prayer in New South Wales’s Lower House; “Almighty God, we ask for your blessing upon this Parliament. Direct and prosper our deliberations to the true welfare of Australia and the people of New South Wales. Amen.”

. . . to the undeniably Christian prayer in Queensland, which includes dated terminology and requests God “direct and prosper all our consultations, to the advancement of Thy glory, the good of Thy Church, the safety, honour, and welfare of our Sovereign and this portion of Her Commonwealth … [T]hese and all other necessaries, for us, and Thy whole Church, we humbly beg in the Name and Mediation of Jesus Christ, our Most Blessed Lord and Saviour.”

No other parliament goes as far as Queensland, which prays “especially for the Parliament of Queensland under our Most Religious and Gracious Queen.”

In the ACT, no prayer is read. Instead, the Speaker offers an invitation: “Members, at the beginning of this sitting of the Assembly, I would ask you to stand in silence and pray or reflect on our responsibilities to the people of the Australian Capital Territory.”

Ms Sandell has pointed to the ACT model as a viable alternative for Victoria.

“The Greens believe that beginning the Parliamentary sitting with the Lord’s prayer is anachronistic in 2015, and it is a matter of making sure Parliament is representing Victorian society and not just those of Christian faith,” she said. Mr Smith had claimed that not being present for the prayer was against the traditions of the House.

He drew on the ‘parliamentary bible’, Parliamentary Practice, first drafted by the constitutional theorist Erskine May in 1844 and relied upon heavily by Westminster parliaments ever since, as his basis for requesting a ruling from the Speaker.

“Page 207 of Erskine May Parliamentary Practice, 23rd edition, makes it clear that as a backbencher at Westminster, if you do not take your seat during prayers, you do not get your seat for the rest of the day,”  Mr Smith told the House.

Invoking the silence of the Parliament’s Standing Orders to press his case in regards to MPs attending the prayer, he added that in the absence of a clearly stated rule, Mr Erskine May’s Parliamentary Practice guide be drawn upon.

This would appear to be backed by the procedures office, which says in its facts sheet that “parliaments following the Westminster system use [Parliamentary Practice] as a procedural guide . . . [I]f a procedure is not covered by standing orders, the Legislative Assembly can follow the rules and practice of other Westminster parliaments.”

Mr Smith complained that the behaviour of the Greens “exhibits a total lack of respect and almost contempt for the ancient traditions of this House and indeed [the Speaker’s] authority over it.”

Mr Languiller is free to respond to Mr Smith’s point of order and provide a ruling at his own discretion.

On balance, Mr Smith may have the majority of the electorate on side, with 61 per cent of Australians nominating themselves as Christians in the 2011 census.

However, with more than one religion practiced in Victoria, along with the steady rise of ‘no religion’ as a census option, Mr Smith’s technical correctness might not survive much beyond  next year’s national stocktake. After all, the percentage of Christians in Australia has fallen from 95 per cent in 1901 to where it is today — a trend that shows little sign of abating. 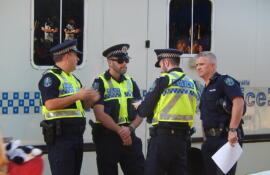