Fancy shoving a 4kg burger down your throat in 23 minutes? Buffy Gorrilla reports on the growing phenomenon that puts body and mind to the test. 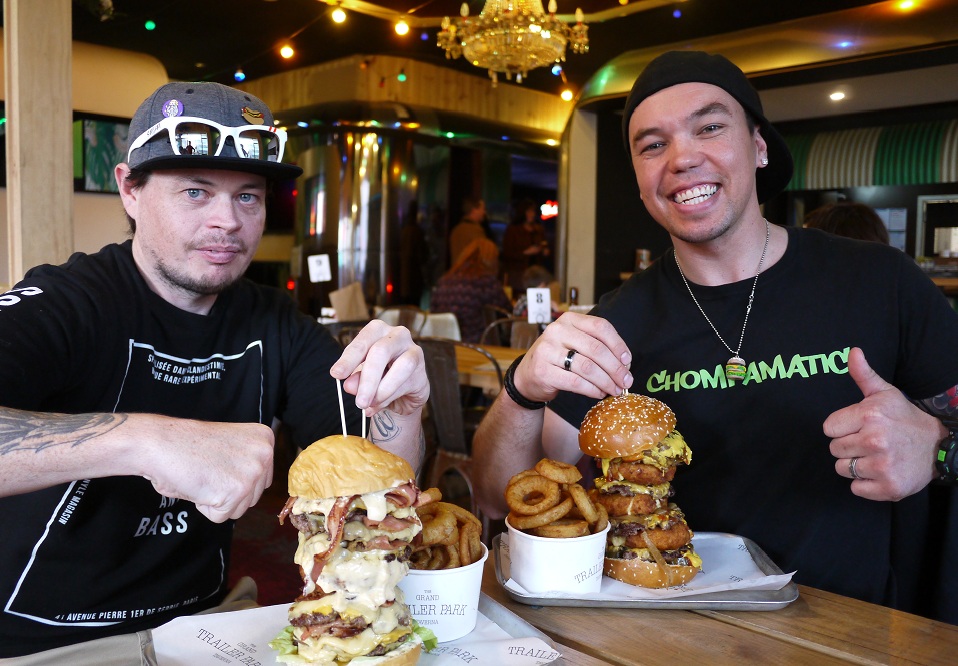 Cal Stubbs cannot escape hamburgers, nor does he want to. He flips burgers in 12-hour shifts. And at the weekend, he and a band of fellow grilled-patty enthusiasts scour burger joints looking for the best Australia has to offer, sometimes hitting up three or four shops in an afternoon — all this to feed his competitive eater appetite.

“People are either disgusted by it or fascinated by it,” says Mr Stubbs of people’s reactions when he tells them about his part-hobby, part-obsession. He is one of Australia’s top competitive eaters, who can put away a 1kg burrito in under two minutes and has a collection of more than 200 competitive eating T-shirts.

The 39-year-old from Keysborough, in Melbourne’s south-east, has been on the circuit for 18 months. When competing, he goes by the moniker Hulk Smash Food. He says he hasn’t been called by his “real name” for more than a year. He has 72,500 followers on Instagram; “the biggest burger account in Australia,” he says proudly.

Competitive eating is on the rise in Australia. Restaurants, street festivals and other venues organise food-based challenges as a marketing tool to woo customers. Contestants sign up for the glory of winning free meals, even cash prizes, while spectators congregate to see how anyone can possibly eat a 4kg hamburger, a feat Mr Stubbs accomplished in 23 minutes at one recent event. 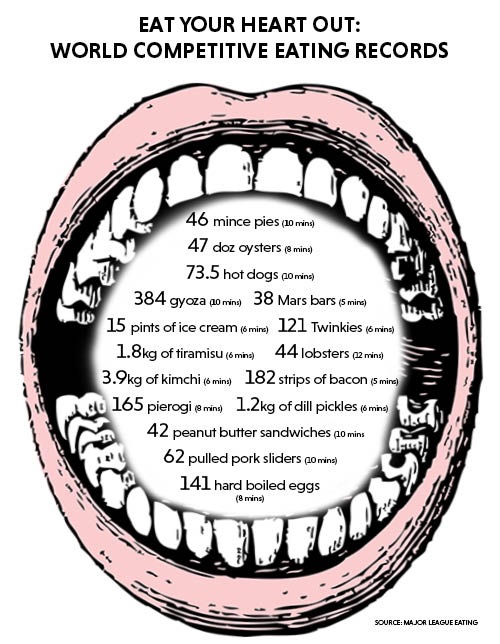 Soon, the top 17 competitive eaters in Australia will vie for four places in the Worldwide Battle of the Big Eaters, a popular Japanese TV show. According to Mr Stubbs, Australia has competitors in every state except ACT and the Northern Territory. If successful, these foodie finalists will compete against teams from Japan and the US in the quest for international prestige and one hell of a t-shirt.

The challengers have been training on hot dogs, ribs, chicken wings, sushi, oversized English breakfasts and even burgers. One eater, Col the Conqueror, won a trip to Trump Tower in New York by eating the most Trump mini-burgers.

Riley Murphy, aka Chompamatic, a gregarious and successful competitive eater from nearby Frankston, took on his first burger challenge three years ago and has competed regularly since. When he started, he says, competitive eating was virtually unheard of in Australia.

“Everyone just ate normal things, normal servings,” laughs Murphy, 31. “Every six months there are new eaters and it is a market that is expanding.”

On this particular Sunday, Mr Murphy and Mr Stubbs meet up to try out an untested burger joint. They have phoned ahead to warn the restaurant that their special order “will take up the entire grill”. They are not joking.

The burgers arrive at Table 11, each laden with bacon, cheese, mac-n’-cheese croquettes and five beef patties. The pair’s eating style is similar: they cradle the burger like a newborn and work through it like an ear of corn, typewriter-ing their way with huge bites.

It is, in fact, a strategy known in competitive eating circles as chipmunking; as a competition draws to a close, eaters stuff as much food into their mouths as possible – if it stays in, it counts. 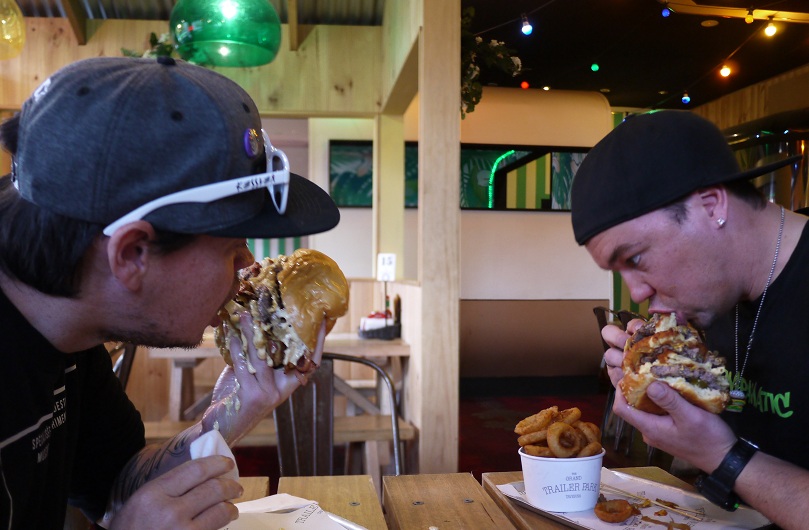 Mr Stubbs says that in a competition he would be able to consume this tower of calories in three minutes. But he and his companion are not eating against the clock, so they take their time.

Modern day competitive eating, unsurprisingly perhaps, is an export from the US. But face-stuffing has been around for centuries. An anthology of 13th-century Norse myths, The Poetic Edda, tells of an eating contest between Loki and his servant — the servant bested his master by eating the plate (what a strategy!)

According to the sport’s governing body, Major League Eating (MLE), the American version of this food-based pastime began in 1916 when hot dog empire Nathan’s Famous held its first Fourth of July hot dog-eating contest in Coney Island, New York – a tradition that continues to this day. 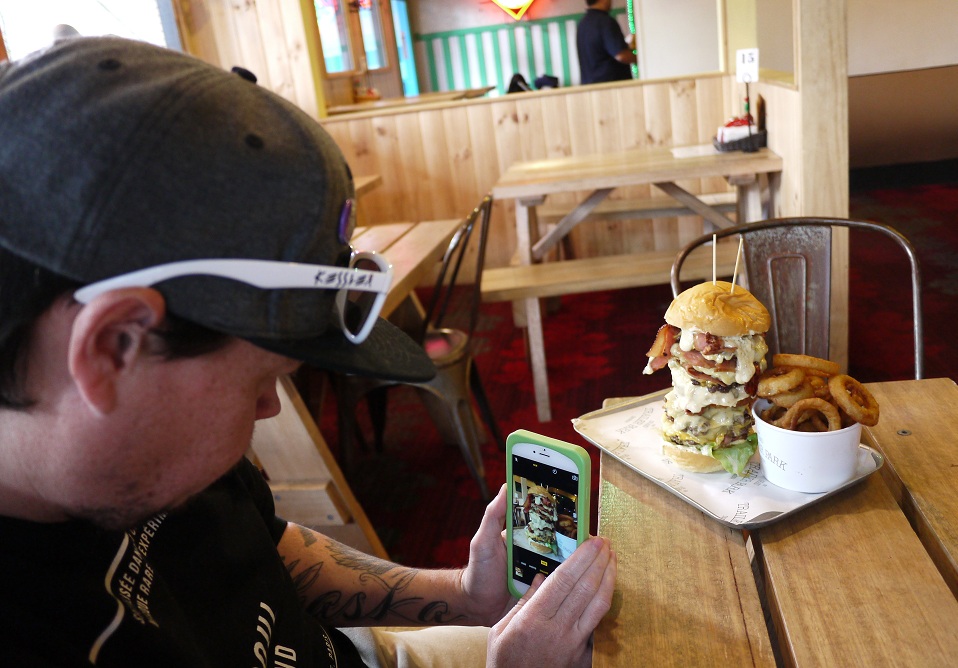 Nowadays, eaters compete in categories: counted foods, weighed foods, and capacity. There is a challenge for all tastes. And a world record, too. How about deep fried asparagus? 5.8kg in 10 minutes. Or 6.5kg of birthday cake? That took someone just eight minutes. There’s a record even for consuming a 7-Eleven Sports Slurpee – 22oz in 9 seconds. (Imagine the brain freeze.)

Australia looks to have quite a bit of work ahead if it covets a place on the world food eating dais. A hot dog eating challenge on International Hot Dog Day at Melbourne’s Luna Park showed why: Ollie Ressom, the top male competitor, polished off 15 hot dogs, buns included, in 10 minutes. Mr Ressom’s victory bested the 2015 winner by six dogs, but fell a long way short of the world record of 73.5 hot dogs in the same amount of time.

The record holder, Joey Chestnut, is described on MLE’s site as “the greatest eater in history”. He excels at hot dogs, wings and chili and holds 42 world records.

According to Mr Murphy, Mr Stubbs might just be the Joey Chestnut of Australia. But the latter is wary. “We don’t have an official ranking system in Australia, we are not on the world scene and there are a lot of amazing guys out there,” he responds modestly. “I would rank Isaac Harding Davis from Sydney as number one in Australia, but we don’t get to go head-to-head with other interstate competitors very often.”

Competitive eating is not in the Olympics – yet. Nevertheless, according to MLE, it does constitute a sport. Mr Murphy and Mr Stubbs both agree vociferously with the classification, odd as it may seem to some spectators.

Mr Murphy credits the training regime that eaters must undertake for helping lend the “sport” legitimacy. “I have to work very hard with my exercising and the whole aspect of stretching my stomach. There is a lot of hard work and training behind the scenes, which I would compare to any other athlete out there.”

Water is a competitive eater’s best friend. Mr Stubbs uses water to stretch his stomach in the lead up to a competition.

“We scull about 3.2 to 3.3 litres of water at a time, each day leading up to a comp to stretch the stomach,” he explains. “Any more than that and you can die, you drown your organs.” 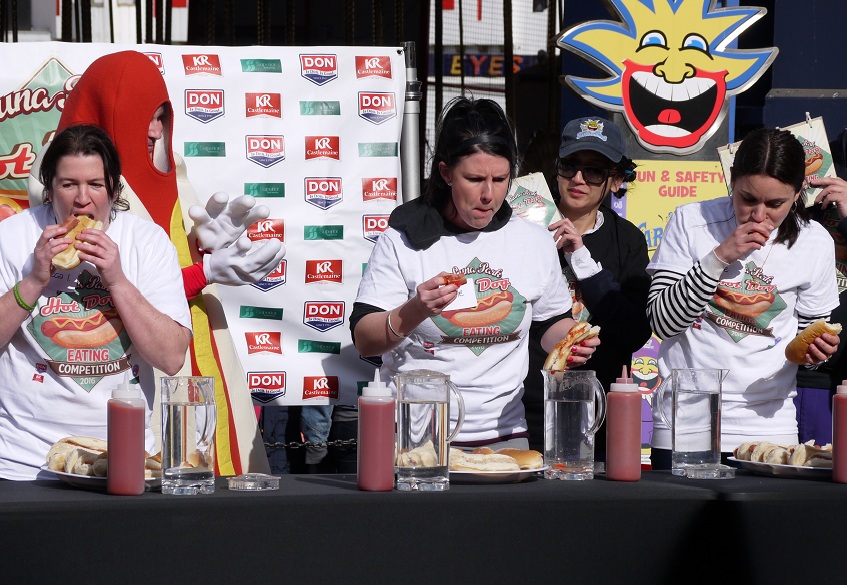 Mr Murphy’s regimen is similar. “I can do about three litres in two minutes, so your stomach is stretched to full capacity, but there are no nutrients or sugars and fats, so it is cleansing and healthy.”

He consumes the three litres of water at least once a week to maintain a stretched stomach. But with an event on the horizon, Mr Murphy lifts this intake to once a day.

“I would say it is about 30 per cent training and having a big appetite,” says Mr Stubbs, referring to the mental toughness required to polish off a 4kg burger or 100 pieces of sushi. “It is more than 70 per cent mental, pushing yourself through that barrier where other people stop and think it can’t be done.”

But competitive eating is not all free hamburgers, T-shirts and glory. Data about the long-term side effects and health risks of competitive eating are scare, according to Duane Mellor, accredited practising dietitian and spokesperson for the Dieticians Association of Australia. “It is important to think about the physical and psychological effects on a competitor,” he says.

Mr Stubbs and Mr Murphy go for quarterly check-ups to monitor their health. Dr Mellor says the physician will likely check a range of factors: weight, waist size, cholesterol, blood sugar, metabolism and the proteins the liver can produce in response to mild shock. This is a simple test to determine whether the eater’s liver is healthy or if they have a liver disease.

“The larger concern is psychological,” adds Dr Mellor, who is also an associate professor in nutrition and dietetics at the University of Canberra. “Competitive eating detaches you from why you eat and why you choose to eat. Eating might not be a pleasure anymore.

“Our cues for eating might change and when you step away from mindful eating, where you control and enjoy your food. This could ultimately lead to long-term relationship problems with food for the competitive eater.”

Mr Murphy, a father of two, is aware that there are risks with competitive eating.

“If I was in a health risk, I would stop. It would be as simple as that,” he says, adamantly. “I am not looking to put myself in an early grave but, I am young, I am fit, I am healthy, and this is something I will pursue as long as I can.”