As a child, Olympia Nelson was thrust into a media storm courtesy of a photograph taken by her mother, Polixeni Papaetrou. A decade on, as an exhibition of her late mother’s work opens, she talks to Chelsea Cucinotta about family, creativity and fleeting notoriety. 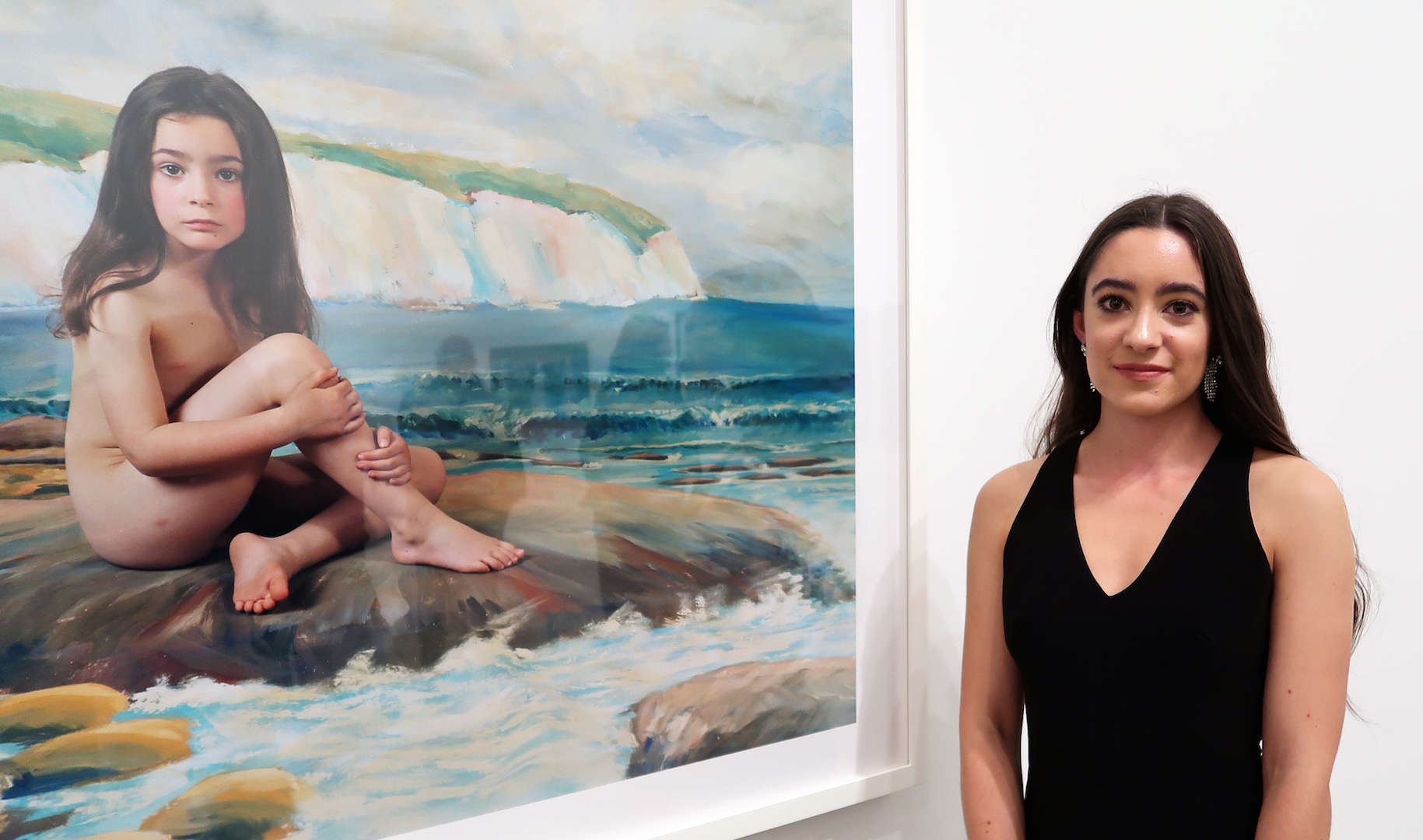 'My first body of work would’ve been when I was four. And it all started from there": Olympia Nelson. An exhibition of photos of her, taken by her late mother, Polixeni Papapetrou, is now on at the National Gallery of Victoria. Photo: Chelsea Cucinotta.

It’s around 10am on a Thursday and Lygon Street’s D.O.C Espresso is bustling. Patrons are stocking up in the delicatessen – imported cheeses, cured meats, Italian sweets – grazing, conversing, reading, caffeinating.

A petite young woman orders at the bar. “Devi parlare in Italiano perché vado a Venezia nella prossima mese,” she says, explaining to the waiter that she’s keen to polish her Italian. She’s about to fly to Venice for a stint as an intern at the Peggy Guggenheim Museum. She waits for her order in a corner near the kitchen where she can tune into some unvarnished language from the chefs and waiters.

Olympia Nelson is all grown up now, but the long black hair and the assured gaze of her deep brown eyes are just as they were when she was, as a child, for a moment, famous. Olympia as Lewis Carroll’s Beatrice Hatch before White Cliffs (2003): Courtesy of the estate of Polixeni Papapetrou.

In 2008 a photograph of Nelson, naked, aged six, appeared on the cover of Art Monthly magazine, and ignited a national sensation. It’s a moment that will be revived in cultural consciousness with the opening next week of an exhibition at the National Gallery of Victoria of photographs of Olympia taken by her late mother, Polixeni Papapetrou.

The controversial Art Monthly cover image  – Olympia as Lewis Carroll’s Beatrice Hatch before White Cliffs (2003) – showed her as a red-cheeked child sitting on a rock in a blue-hued painted scene. Her pose was modest, her body turned from the camera, her gaze directed square and sure down the barrel of her mother’s lens.

Its publication was a provocative move at a moment when questions of censorship and art were hot topics of public debate. Australian photographer Bill Henson had just been criticised for his work featuring bare-chested young women, and while some protested that his images were exploitative and represented “pedophilia”, Art Monthly jumped in to defend Henson and stir the pot further with Papapetrou’s image.

“Our cover may be seen as controversial,” it editorialised, but it was published “in the hope of restoring some dignity to the debate; to validate nudity and childhood as subjects for art”.

At the time of publication Nelson was aged 11; the shot had been taken when she was eight. More than a decade later, tucking into a piadina loaded with prosciutto and mozzarella, she vividly recalls the storm that the picture aroused. “It’s crazy to think about.”

Her family became the talk of the nation. “A little child cannot answer for themselves about whether they wish to be depicted in this way,” Prime Minister Kevin Rudd chimed in. “Frankly, I can’t stand this stuff.”

The “little child” answered back, fronting a scrum of reporters and declaring that she was “really, really offended by what Kevin Rudd said … I love the photo so much.”

She still does. “What I said as an 11-year-old on TV to Kevin Rudd would be no different to what I’d say today … Defending my image as art and not pornography was a huge thing to do,” she says. “But I’m so glad I did it and so grateful for all the support I got.”

Nelson recalls giving her consent to the cover. “I remember where I was. I remember what I was doing. I was in (mum’s) studio just playing, and I was like “yeah, whatever” and it didn’t mean that much to me.

“And then I literally woke up one morning, and the picture was on Sunrise. And I froze.”

Journalists were at the door of her family’s inner city home in a matter of hours. “They stalked us. We then went to my Yiayia and Papou’s house and took refuge there, because who’s going to come all the way to Springvale?”

The words from the mouth of young Olympia testify to her considered approach, even as a child, to modelling for her mother’s camera. She describes it as “performative” work, where she could embody different characters, emboldened by her intimate, unique connection with the woman behind the camera. Thousand Yard Stare from My heart – still full of her (2018): Courtesy of the estate of Polixeni Papapetrou

From birth, baby Olympia was Papapetrou’s muse. Their artistic collaboration began with a series called Olympia’s Clothes, with “beautiful baby clothes from France and Italy”.

Then when Olympia was four, she began taking an active role in her mother’s work.

“Mum and dad would often recall this story to me, that when the models left, I’d say “Photo me, photo me”. I’d just repeat that again and again,” she says.

“And she finally gave in, and so my first body of work would’ve been when I was four. And it all started from there.”

“It wasn’t just a kind of process of just taking the pictures in the studio, we would always celebrate afterwards,” says Olympia. Their mother-daughter dates saw them shopping in the city and sharing hot chips along the promenade in Southbank with the seagulls.

They are cherished memories. Nelson’s mother died of cancer in April 2018, aged just 57.

“These are things that I’ll never forget, and I’ll always keep very close to me.”

Which is not to say that there were not some difficulties being so exposed, as a child, to the public eye. She’s actually very shy, she says, so it can be awkward when her history crops up  – as has happened even in a criminology class.

“People even today say “oh you’re that girl” … And I mean, I study art history so it’s inevitable that the issues that come up in contemporary art history are about pornography and child representation,” she says.

“And so, it makes sense that our family’s part of the conversation.”

The conversation will be revived with the new exhibition. Assembling it, the curators “were really very interested in the collaborative process between me and mum, and then also the involvement of dad” –  The Age’s long-time art critic Robert Nelson, who was also a scene painter for Papapetrou. Brother Solomon was also part of the action.

The whole family was involved in what Olympia describes as a “Renaissance studio”.

“It’s like this intimate, quite rare process of having a family all working together and having an individual role to play. And it’s also that sense of passing on the lineage and passing on knowledge and experience,” she says.

“So, mum took the pictures, dad painted backdrops, my Yiayia made the clothes, I acted, and Solomon … Often mum’s friends would help to hold light-reflectors, which dad would make.”

Nelson narrates how the events in her mother’s life shaped her art. Somberness from the Melancholia series (2014): Courtesy of the estate of Polixeni Papapetrou”

A series titled Melancholia was made in 2014, after Papapetrou’s secondary cancer diagnosis. It examines how we mask ourselves from the melancholia of life. It was, Nelson recalls, a very hard moment in their collaboration.

Each of the eight images in the series shows Nelson dressed in clown-like costumes, with pale, grotesque masks. The colourfully crafted outfits are juxtaposed by a bleak, black backdrop. Nelson’s posture and the direction of the mask’s gaze shifts with each image – in Grief her head tilts towards the floor, while in Somberness she almost shrugs with a sense of indifference. The pictures are unsettling.

“Behind these masks I was crying,” says Olympia.

Papapetrou’s last series, My Heart Still Full of Her, was made on her deathbed in 2018. The collection consists of original photos from her archives, printed on silkscreen.

Independent curator Natalie King has described the work as an exploration of “photography and mortality, darkness and worry, fear and sadness”. It departs from Papapetrou’s use of the studio setting or outdoors, and instead focuses “inwards”.

In one image, Thousand Yard Stare, a young Papapetrou carries a limp, naked young girl – her daughter. King likens it to the Pietà, “a classic image of maternal suffering”.

“It was a beautiful and intimate process, because it was all done at mum’s bedside in the last months of her life. We worked on it together and spent a lot of time deciding on either gold or silver silkscreen as backgrounds, depending on the work,” says Olympia.

“It’s so special. It’s like our journey as mother and daughter will never stop, because we’ve got these photos as memories.”

*Olympia returned from Venice in time for the opening of her mother’s exhibition. .

Olympia: Photographs by Polixeni Papapetrou will exhibit at the NGV at Federation Square from September 27 to March 15.

An edited version of this story is co-published by Crikey.