Early voters are eating advance rations of democracy sausage and queueing to avoid the queues on Saturday. Millions of ballots are already in. Can $4 billion for the East West Link keep Liberal Michael Sukkar in his seat? Jack Banister studies the form. 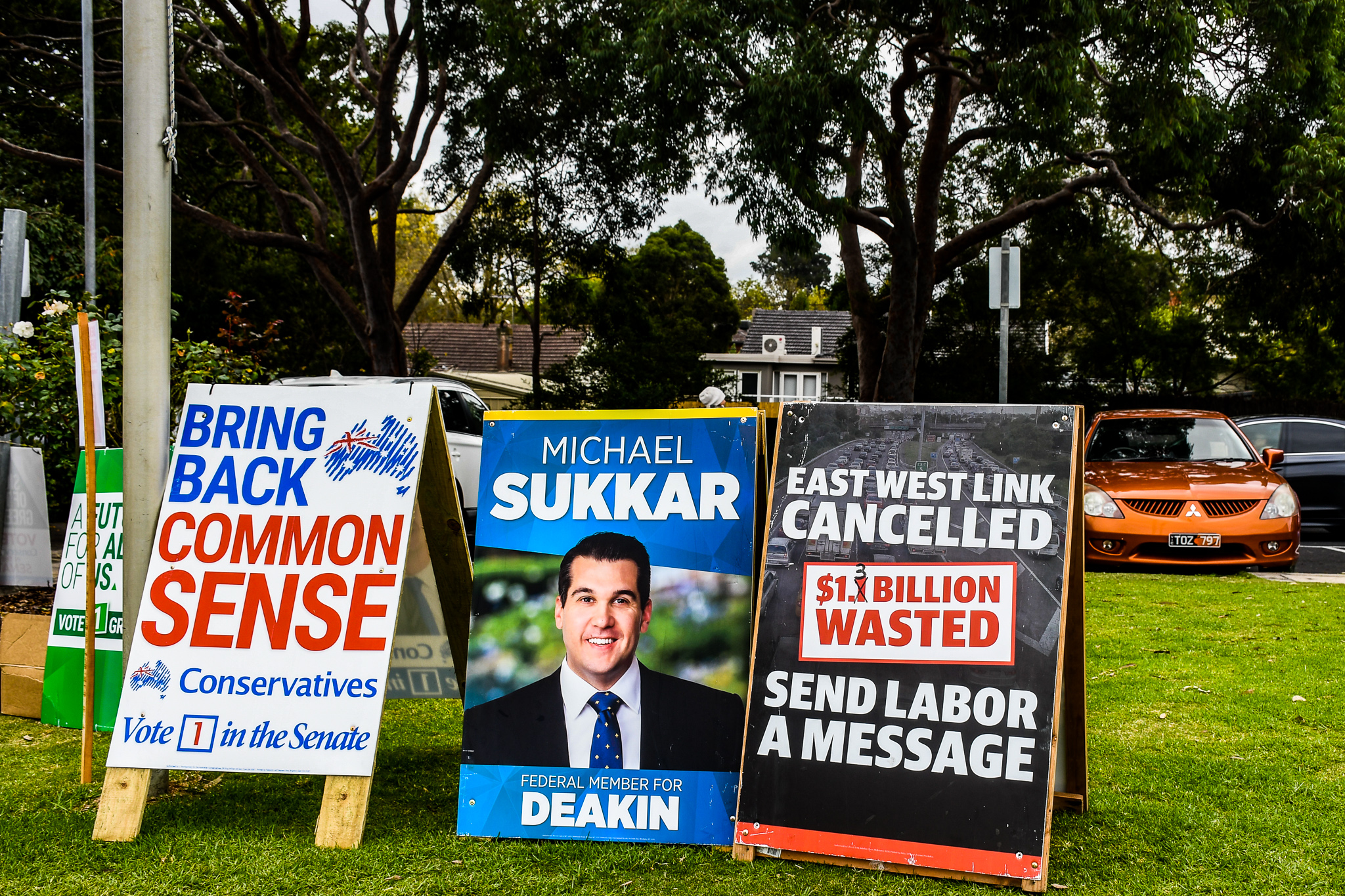 The picturesque knolls next to the greens of the Ringwood Bowls Club are bristling with heads on stakes – a forest of mug shots of candidates and political livery.

The club is an early voting centre for the fiercely contested seat of Deakin, so the elderly couple enjoying a gentle bowls match is surrounded by hoards of volunteers adorned in campaign t-shirts; a steady trickle of voters; the incumbent, peacoat-wearing Liberal member, Michael Sukkar; and an old man behind the inevitable barbeque, brandishing tongs and wearing an apron that says “Caution: Hot”.

That slogan might also apply to the ongoing debate around the revival of the controversial East-West Link, which Prime Minister Scott Morrison reopened at the start of this campaign’s final week with his eye fixed on winning over voters here, and in other marginal seats in Melbourne’s east. An exclusive poll by the Herald Sun indicates that the Coalition’s primary vote in Deakin has crashed by 6%, meaning the race between Mr Sukkar and Labor challenger Shireen Morris will almost certainly go down to the wire.

Mr Morrison’s 11th hour pledge – to pour $4 billion into the project, which would connect the Eastern Freeway to CityLink via a tunnel, thereby reducing congestion on Alexandra Parade – may be the thing that saves Mr Sukkar’s political skin. Victorian Labor Premier Daniel Andrews, who ditched the initial plans for the new road when elected in 2014, has called Morrison’s announcement a “last minute con”, and maintained that the idea doesn’t stack up.

The Prime Minister says the shortfall in funding for the East-West Link would be made up by partnering with the private sector, but the total cost of the project is unclear. A report by the Victorian Auditor-General in 2015 projected the road would cost $22.8 billion, but the initial planning estimates in 2013 said it would cost between $6 and $8 billion.

Premier Andrews’ rejection of the project was costly, and the Liberals are keen to ensure voters don’t forget it. One of the signs on the grassy knoll reads: “East West Link Cancelled. $1.1 billion wasted. Send Labor a message”. The second “1” has been crossed out, and replaced by a makeshift “3”, drawn on in black texta.

Next to the sign Cam, 50, a self-described “subsistence carpenter” with a ponytail and a ginger beard, stops to chat to The Citizen. He says that Andrews’ decision to ditch the project was a poor one.

Cam drives across the city to Werribee to pick up his kids every second weekend and says “it’s not worth picking them up on a Friday” because of the congestion. Being stuck in his car for long periods also stirs up a nagging lower back condition. Despite all of that, he says Mr Morrison’s announcement won’t sway his vote, and that he’s fed up with politicians on all sides. He describes the Greens as “dickheads”, but says he’ll be voting for them because he thinks they have the best policies.

“I think the only person I have any respect for is probably Derryn Hinch. He seems to be someone that’s fair dinkum. I reckon we’ve lost our bullshit metre in Australia.”

Nearby another gentleman, happy to share his age – 42, but not his name – has taken a seat on a bench next to the bowling green so he can chow down his sausage with the lot. Between bites, he explains why he swung from voting for the Greens in 2016, to voting Liberal this time around.

He didn’t like the leadership spill but trusts the Coalition to manage the economy better than Labor. The new East-West Link announcement has helped to secure his vote.

He says he was angry at Andrews when he ditched the project in 2014. He’s still angry, especially when he gets stuck in traffic driving down the Eastern Freeway towards the city.

Callum, an energetic 22-year-old with shoulder length brown hair, arrives soon after in a dented red Mitsubishi driven by a mate. He’s voting Labor, and no last-minute promise is going to change that.

“I don’t drive, but I still think we should build more roads. But that shouldn’t be the only solution. I think public transport is going to be a major solution [to congestion].”

Asked to choose between the two, he says he would rather see politicians commit money to public transport.

“Cars take a small amount of people, but trains and busses take hundreds and hundreds of people. I think that’s going to be better not just for congestion, but also for the environment in the future.”

Closer to the city, at the New Hope Community Centre in Blackburn North, the idea of voting early to skip the queues on Saturday backfires. Several would-be voters (here, they’re from Deakin, Chisholm, Kooyong and Menzies) give up, exasperated at the half-hour wait, and the absence of sausages. According to the Australian Electoral Commission, approximately 3.48 million people had voted by close of business Wednesday. Claire, 47, is unperturbed by the queues, and has time to chat. When asked about Mr Morrison’s new pledge, she’s immediately cynical.

“Honestly, I think they all tell lies. They say what they think you want to hear.”

While the East-West Link isn’t going to affect her vote, she acknowledges that the road “would make life easier”. She’s voting based on concerns around the environment and on animals, although she declines to say which party that leads to. Like Callum, she would rather see money spent on public transport than new roads.

Another woman is defeated by the long wait, and abandons the queue, resigning herself to lining up again to do her democratic duty. She too gives her age, 63, but declines to give her name. She’s cranky about the queue, and has had enough of politicians on all sides.

“Let me just tell you, Scott Morrison, I wouldn’t vote for him in a pink fit … the Liberals are only there for themselves,” she says.

On East-West Link, she says “we do need it”, but stresses that it amounts to little more than a last-minute grab for votes, and that it won’t sway her.

She’s never voted Liberal before, but her Labor red nail polish and the how-to-vote card she’s clutching should not be read as clues to her intentions. She says that the party has “lost the plot” under Bill Shorten.

“He’s just not doing it for me … I want another option.”

The Citizen approached the incumbent Liberal MP, Michael Sukkar, at the Ringwood Bowls Club, but he declined to chat, saying he wanted to talk to his constituents.