On the eve of the 2020 AFLW season, the Blues coach talks last year’s grand final defeat, the position of responsibility he is in and ‘running to the roar’. Jack Banister reports. 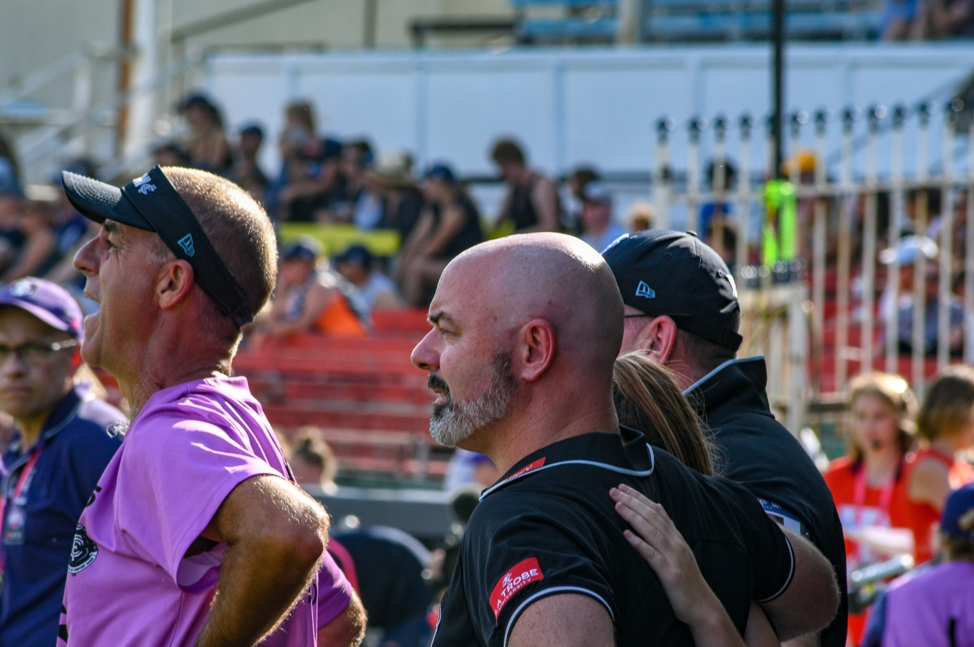 Carlton coach Daniel Harford watches on from the boundary line.

There’s a week left, almost to the hour, until Carlton run out onto Ikon Park to begin the 2020 AFLW season against Richmond. Their headquarters, in the bowels of the famous old ground, are a hive of activity and noise.

There are jumpers to be signed, hamstrings to be massaged and laptops spreadsheets to be filled in. In the open plan gym, midfielder and identical twin Sarah Hosking works her triceps to the tune of “Safe and Sound” by Capital Cities.

Tucked away in his office, with a half-drunk smoothie and a copy of the 2020 AFLW Prospectus on his desk, senior coach Daniel Harford is unfazed by the chaos, and the clock ticking away the hours until round one.

A popular sports radio host with RSN Radio Melbourne, Harford also took up coaching when his 162-game playing career with Hawthorn and Carlton ended in 2004. ­Ten years in amateur football at Balwyn and St Kevin’s enabled him to act on the impulses he had as a player. In that guise, he had ideas – from seeing what worked and what didn’t, and from imagining what could be tried – but no opportunity to put thought into practise.

“I was one of those guys who sat in the meetings and thought, ‘I’d probably go this way’. But I wasn’t given the authority to have that moment.”

He jumped into women’s footy “with a blank canvas” when the chance to join Collingwood as an assistant opened up in 2018.

“What I found early was it was just such an energetic environment, and that’s what was really quite captivating, to have that audience that really wanted to learn and be given this opportunity that has never been there … that’s what you really want as a coach – players that want to listen to you and feed off you,” he recalls.

The Blues won the wooden spoon in 2018 and subsequently parted ways with coach Damien Keeping, which paved the way for Harford to take over for season 2019. The ethos the 42-year-old brought was the same one he applies to everything he does, from radio and coaching, to family life.

“I’m not afraid to be myself … what you see is what you get with me. I’m not 25 trying to impress anyone anymore. I’ve got no hair. My abs have disappeared. The world’s a different place and I’m pretty okay with it … the word these days is authentic. If you’re authentic, you’ll be okay.”

The initial challenge at Carlton, Harford says, was to see if he could “change a program”. By season’s end, he had been named the AFLCA’s AFLW Senior Coach of the Year after leading Carlton through an emotional and eventful finals campaign.

There was the social media furore that enveloped key forward Tayla Harris after a photo of her kicking action was taken offline by Channel 7 because of trolls. That dominated headlines in the lead-up to the Blues’ barnstorming preliminary final win over Fremantle. Most observers had written them off as the beneficiaries of a lopsided conference system, an assessment that Harford didn’t let pass in his post-game media conference, where he sarcastically called his side “that Conference B crap team that can’t play”. Carlton players celebrate after winning through to the e 2019 AFLW grand final.

The Blues took to the Adelaide Oval for the grand final in front of 53,034 people at Adelaide Oval – a record crowd for a standalone women’s sporting event in Australia – but were soundly beaten by 45-points, courtesy of competition powerhouse Adelaide. At the time, Harford said the game “might be one of the most significant moments in Australian football history.”

With eight months separating that helter-skelter season finale from the start of the new pre-season, what did Harford make of it all when he had the chance to stop and reflect?

He’s keen to stress that the AFLW coaches take a huge responsibility for how people see women’s footy, and that they understand the magnitude of what the competition means. But he says that most of his off-season energy was spent trying to work out how to avoid heavy losses in the future, a task aided somewhat by the brutal honesty of his wife Rebecca.

Pre-season began with the inevitable review of the grand final loss, which Harford says was “the end of it.”

Compared to 2019 – a total rebuild which carried a macro-level focus on broad improvement – the coach says that 2020 is about the micro-level “footy stuff”. They’ll be seeking those incremental gains with almost a third of their list from 2019 gone. The most notable change is the loss of inaugural captain Brianna Davey to crosstown rival Collingwood.

“She was our captain, and she was our equal best and fairest (in 2020). That hurts, but again, I’m pretty pragmatic … you’ve got the player you’ve got, the ones that aren’t here can’t help you and they can’t hurt you until such a time as you play them again,” he says. When Daniel Harford moves the magnets in season 2020, he won’t have Brianna Davey as an option.

That moment – when the Blues meet Davey’s new side – will arrive in round two, and Harford hopes she’s there.

“I hope that when we meet the Magpies, she’s playing. I wanna see that, and I’m sure some of our players do, too.”

Before they can worry about any sort of revenge, though, there’s the season opener against Richmond. With an eye to channelling the obvious energy of his players into a winning effort against the competition newcomers, Harford’s demeanour in a week’s time will be exactly the same as it is now.

“I’m pretty relaxed and pretty low key in terms of build-ups. I’m not a big ranter, not a big roarer. I’ll be walking around, dancing to the tunes, throwing a few high fives, and cracking a few Dad gags … I have been known to scorch a few floors.”

It’s unsurprising given his media background that Harford also loves to tell stories pre-game. Pressed for an example from the past, he picks out the “run to the roar” parable, which was used by Michael Voss during Brisbane’s dominant three-peat in the men’s competition.

“I used it in our first win last year against GWS, and that got us on our way,” he says.

The story, as he tells it, is a simple one. A pack of lions are hunting antelope and move in to surround their prey. The old, decrepit lions, the ones that can’t run and chase, face the antelope and roar, hoping the frightened game will turn and flee in panic. On either side, the healthy lions lie silent and waiting. When the antelope turn from the roaring lions and flee, they’re duly snaffled up.

The moral: the antelope only survive if they confront their fear and run towards the roar.

“Don’t be afraid to take on the fear and run to the roar. You’ll be amazed at what you can do,” Harford says.

This story was co-published by Guardian Australia.