Graveyard Shift (Every body has a story): In part two of our series exhuming lost lives in the Melbourne General Cemetery, we meet controversial, influential and activist Aboriginal leader Derrimut. Claire Capel-Stanley reports 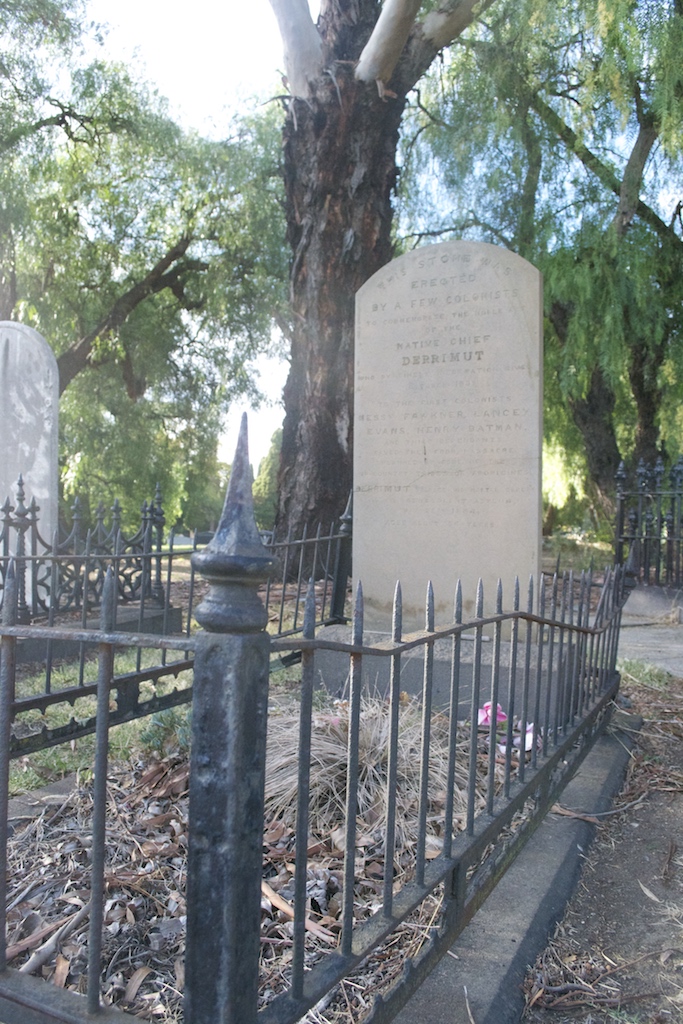 Many Melburnians are familiar with the name Derrimut. It’s a suburb, a mountain, and it’s the name given to streets in Albion, West Footscray and Hoppers Crossing. It’s even a state electoral district.

But most do not know the story – and the person – behind the name.

In a shaded part of Melbourne General Cemetery, a pale gold headstone commemorates Derrimut, a Boon Wurrung leader, who died in 1864. Portrait of Derrimut by Benjamin Duterau. Painted in 1837 as a result of the visit to Hobart with J.P. Fawkner. (Dixon Galleries, State Library of NSW.) – Image/ Wikicommons

The plot is a garden of weather-worn fake roses left by people who still visit the grave, a whorl of thick dry grass and sprawling green succulents. The headstone tells a complex story of colonial power and Aboriginal resistance.

It reads that Derrimut “by timely information given October 1835 to the first colonists . . . saved them from a massacre planned by some of the up-country tribes of Aborigines”.

According to research by Boon Wurrung Elder Carolyn Briggs, Derrimut was the head of the Yalukit-weelam clan, whose land extends from the mouth of the Yarra River, to what is now St Kilda and South Melbourne.

Dr Ian Clark, a non-Indigenous historian, says that as a clan leader, Derrimut was an important negotiator with the early white settlers of what is now called Melbourne.

“He certainly had a lot to do with them, went fishing with them on at least one occasion, and lived with them at several stages,” Dr Clark says.

Historians have speculated on Derrimut’s motivations for giving the warning of an attack, but Dr Clark says that “it is clear that he was not acting alone”.

He says that the warning was given with the permission of Billibellary, a Wurundjeri clan head, and a key Kulin leader during the colonial period.

Accounts differ as to what happened after John Pascoe Fawkner and the other colonists found out about the planned attack.

In his diary of 1835, Fawkner wrote that he had received a warning that other Aboriginal tribes “intended to murder us for our goods”, and that they were “chased away”.

But when Fawkner recalled the story in a public lecture nearly 30 years later, a newspaper reported that he “believed that Derrimut was the only survivor of the Aborigines who were present on that occasion,” suggesting that blood was shed that day by Aboriginal resistors.

Dr Clark says that ideas that Derrimut was a kind of double-agent, or that he acted in favour of the colonising British, are far too simplistic.

Though he was never formally enlisted, Derrimut’s story can be linked to the Native Police: Aboriginal men forced to assist in the growing war on Australia’s frontier.

Records from 1839 show that Derrimut was made, along with three other Aboriginal men, to assist in the “capture” of members of other tribes who had allegedly killed a white settler.

Jidah Clark, who is a Djab Wurrung and Boon Wurrung man and an Aboriginal policy adviser at the Victorian Equal Opportunity and Human Rights Commission, says that “there was a sense of war, and there was lots of anxiety about those early interactions” between Aboriginal people and European settlers.

“You can imagine, there’s two different worlds clashing, and two different systems of knowing, being and doing,” he says. “People who had lived on the land here forever were trying to reconcile these new people who had arrived and didn’t comply with their laws, and were breaking those laws over and over again.

“It didn’t make sense to see people breaking Aboriginal law and not being reprimanded.”

Derrimut became well-known in the colony after the attack, with a parish – now the suburb – named after him in the early 1840s.

But just as the colonial settlement bearing his name grew, Derrimut witnessed his own lands being occupied as waves of colonisation intensified.

By the early 1860s, most Boon Wurrung people were living at Mordialloc Reserve, which Derrimut advocated specifically to retain. A dispute for the control of the land, which Dr Clark says Chinese migrants were then using as fish-salting grounds, was “reaching boiling point”.

A satirical article appeared in 1862. It was said to be written by Derrimut, but Dr Clark speculates that it was more likely penned by William Thomas, then a chief adviser on Aboriginal affairs, whom he says supported the Mordialloc Reserve.

The article states that Derrimut had heard Fawkner’s story – at that time being presented in lecture theatres in Melbourne – of how “his friends and countrymen seized the hunting grounds of my tribe, now on the point of being swept from the earth”.

It asks, “Is it right that the chieftain who first welcomed the white man here should thus be unknown and uncared for” and that “the gift of a few medicines, blankets and miserable rations” should enable them to “possess his tribe’s hunting grounds without contest and without dispute?”

The reality of land theft was in the minds of both Aboriginal and non-Indigenous people at the time. Jidah Clark says that it is clear from the records that, “people were talking about extermination and talking about resistance”.

Derrimut agitated for land to be returned.

Fawkner’s diary shows that in 1858, Derrimut confronted a magistrate outside of the Bank of Victoria, saying that the land on which the bank stood, between Collins St and Flinders St, belonged to the Boon Wurrung people. Dr Ian Clark’s research shows that he later speared the magistrate, Mr William Hull, for intruding on a traditional ceremony, an event also alluded to in the 1862 Melbourne Punch article.

In 1862, Derrimut was sentenced to 12 hours imprisonment for drunkenness.

When the request to continue living at Mordialloc was refused in 1863, Derrimut’s already poor health declined rapidly.

On March 10, 1864, he was admitted to Melbourne Benevolent Asylum in North Melbourne, where there was a public hospice.

“Some people like to try and push this culture of denial of Australian history. But it’s shared history that we all need to be aware of, understand, and be proud of in a sense. Because there is pride in the actions of people like Derrimut.”

He interprets Derrimut’s “ability to traverse two-worlds” as an example of “thinking on a meta-level” about the systems of land and property ownership that drove the British occupation of Australia.

“Think about how foreign and alien these concepts would have been,” he says.

“For Derrimut to acquire in a short amount of time an understanding of what they’re doing, and then flip the concept back onto them shows that there’s deep-thinking and truth to what he was saying.

“And it’s a truth that those early [non-Aboriginal] people were not able to confront.”

He hopes to see more Aboriginal historians interpreting Australia’s history. “This is why you need Aboriginal people to be looking at this history,” he says.

“The true value will come from the Aboriginal people having the chance to interpret that history, because it’s been hidden for so long.” Counting the cost of rising tides on a precious, vulnerable coast Reporting for duty in the pandemic, young teachers in a class of their own