Concern about climate change has peaked in this federal campaign, fuelled by the realities of extreme weather playing out around the planet. Jack Banister talks to Deakin voters about the politics of a warmer world. 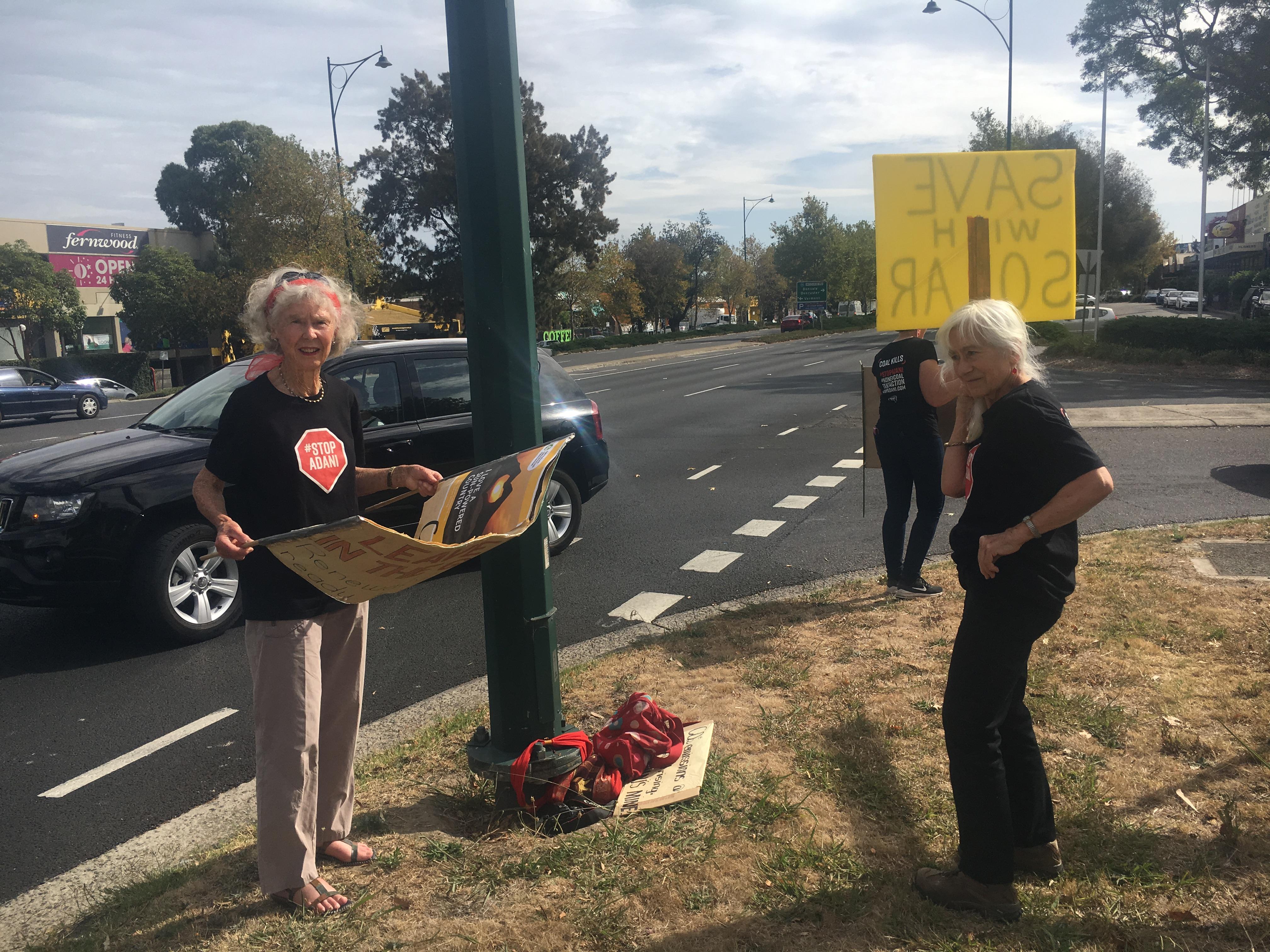 Robin Baillie, left, protests on the side of Whitehorse Road in Deakin.

On the side of Whitehorse Road, the six-lane thoroughfare which runs through the heart of the federal electorate of Deakin in Melbourne’s outer-east, a posse of grey-haired women clad in sandals and “Stop Adani” t-shirts are brandishing signs at the passing traffic.

This collective, calling themselves Eastern Action for the Environment, has been protesting in this spot since March. Directly across the road is the office of the incumbent Liberal Member for Deakin, Michael Sukkar, who holds the seat by a once safe and now precarious 6.4% margin.

One of the protest’s ringleaders, Robin Baillie, 82, says that they’ve chosen this location because of their anger at a government which has “no interest or understanding whatsoever of the damage that global warming is doing to our climate.

“If they continue at this rate, there isn’t going to be very many future generations. And I really want to see a better life for my grandchildren.”

Baillie is a lifelong activist and her concerns about climate change have been built over several decades of observation. As temperatures have risen, the growth patterns of the fruit and vegetables Baillie cultivates in her suburban backyard have changed. Robin Baillie and other protestors.

“They just don’t behave like they used to. The insects are not appearing when they’re meant to. The male and female flowering cycles aren’t coordinating anymore.”

Baillie and her cronies are a manifestation  of growing national concern about climate change, and that sentiment is strong in Deakin. With incumbent Prime Minister Scott Morrison facing the risk of minority government if not defeat on Saturday, the Liberals are throwing everything they have at ensuring Labor challenger Shireen Morris doesn’t bag what could be a make-or-break seat.

Climate change has become one of the most dominant issues in this campaign. An analysis by the ABC’s Vote Compass released yesterday finds that more than 80% of voters want more government action on climate change, up 20% since 2013.  The Australia Institute’s Climate of the Nation polling for 2018 found that 73% of Australians are concerned about climate change, up from 66% in 2017. Another 2018 study by the Pew Research Centre showed that awareness of climate change as a top international threat has increased since 2013, globally and in Australia.

So, why the shift?

Professor William Steffen, one of Australia’s leading climate scientists and a member of the Climate Council, says it’s got a lot to do with the wild weather extremes playing out here and abroad. His observation bears out what many experts predicted, and feared, in observing the years of global inertia on climate action – that people would not take it seriously until it was upon them.

Steffen says that in the past extreme weather events were viewed as one-offs. Public concern would gradually “dribble away” after the fact. But after an extremely volatile year, in which “about 80% of the country, in a two-week period, experienced temperatures over 40 degrees”, Steffen says he’s seeing the shift, anecdotally and in polling.

“I think you hit a tipping point in people’s consciousness to say, ‘oh, these things aren’t one off. There’s something going on here.’”

The extreme weather events in recent times – including unseasonably warm temperatures throughout the election campaign – underline unequivocal alarms being sounded by scientists around the world. The first came via a seismic 2018 report from the Intergovernmental Panel on Climate Change, which outlines the dangers of 1.5C of warming, a figure earth “is likely to reach between 2030 and 2052”.

Then last week, the biggest ever review of the state of nature on earth, drawing on 15,000 scientific sources and backed by the United Nations, concluded that one million species were now at risk of extinction, and that humanity was largely to blame.

None of this comes as a surprise to people like Robin Baillie, but it’s become plain that other punters in Deakin are now reaching their tipping points.

Further along Whitehorse Road, in the mall in Mitcham, company director Anthony Abby, 60, has stopped for a cuppa. He’s not what climate action opponents would characterise as your average latte-sipping lefty. Climate change matters to him much more now than it did at the 2016 federal election.

“I have kids at uni. They’re only 20 and 18, and they talk about it an awful lot. I don’t see any of the parties, the two main ones, doing enough about it,” he explains.

Abby moved to the Deakin electorate two years ago from Korumburra, a small coal mining town near the area that was ravaged by 2009’s Black Saturday bushfires. He brings up his rural roots when The Citizen asks if the recent spate of extreme weather events was a stop, look and listen sign in his friendship circles.

“Yeah … I did live in the bush for a long time, for twenty years, then moved to Melbourne. That was one of the reasons why, because of bushfires.”

After 40 years of voting Liberal, he swung and voted Labor at the 2018 Victorian state election. Now, he’s tossing up between the left-wing options.

Dianne Cokesa – a 65-year-old retiree-turned-bookshop volunteer – says she “wouldn’t vote for a party that goes for coal fired electricity.

“Sometimes I think they [the Coalition] don’t give voters enough credits for having the intelligence to understand climate change. They just put it in an easy way that they think sounds good to their electorate.”

Jack Stein, a 46-year-old father of three, says that he does support lower carbon emissions for the sake of his kids. But that said, he’s no fan of Bill Shorten, and his preferred prime minister is Scott Morrison.

In an Ipsos poll released in April, voters were asked which major party they felt had the best climate change policy. The results align with the sentiment on show in Deakin. Some 42% of respondents said they felt the opposition had the better policy of the two major parties; 25% felt the Coalition’s was better; 34% said they didn’t know.

The Liberal’s policy – the $3.5 billion Climate Solutions Package – is for an emissions reduction target of 26-28% by 2030, which the party  argues is “the equivalent of reducing emissions per capita by around 50 per cent – one of the largest reductions of any G20 economy”.

The Greens policy is for a shutdown of all coal-fired power stations in Australia by 2030, the end of thermal coal exports by the same year, and for emissions to be at net zero by 2040.

Labor’s policy includes an emissions reduction target of 45% on 2005 levels by 2030, a pledge to transition the electricity market to 50% renewables by 2030, and the creation of a Just Transition Authority to shift coal workers into new jobs.

Energy Minister Angus Taylor has led the Liberal campaign against Labor’s policy, saying that it would put a “wrecking ball through the economy”. That claim is based on modelling by Brian Fisher of BAEconomics, which estimates that Labor’s policy would slash $264 billion from Australia’s GDP by 2030. New analysis by the Australia Institute, which assessed 22 other reports on the economic cost of climate change, found that Fisher’s GDP estimate was 10 times greater than the impact in comparable models. Opposition leader Bill Shorten has said Fisher’s report should be filed under “P for propaganda”.

The Coalition’s economic argument doesn’t wash with local businessman Abby, either. He says that “with any change, you get new industries. You get employment. I just don’t buy what the Liberals are saying”.

Echoing a sentiment expressed by Shorten on Q & A on May 7, Baillie says that “they (the Coalition) don’t seem to understand that there’s a cost of doing nothing”.

The cost of inaction was underlined by the entry into the debate this week of eminent economist Ross Garnaut, arguing that Australia has the opportunity to become “the superpower of the post-carbon world economy”.

After a campaign in which the cost of climate action has been a political football, Garnaut presented new work at the University of Melbourne arguing that Australia stood to profit enormously if it seized the initiative to push forward on renewables.

Scientist Steffen has reservations about both the major party policies. Neither party has put a concrete end date on coal and coal exports in Australia.He says that even Labor’s reductions target is “very conservative.

In a Guardian Australia podcast, Labor’s climate spokesperson Mark Butler refused to give an end date when asked, instead saying that “over the first of the 2030s, you’ll see an acceleration of coal closures”.

In early April, the Coalition signed off on the final stage of construction approval for the Adani coal mine, and in March, they announced a $10 million feasibility study to explore the prospect of reopening the defunct Collinsville coal-fired power station in Queensland.

However it would appear that the prevailing winds are against them. A Vote Compass survey released yesterday, the largest ever polling public opinion on the Adani mine, has found that 61% of Australians either strongly or somewhat disagreed with the mine being built.

Without a commitment by the next government to ending coal, Steffen says that getting Australia’s emissions under control will be impossible, no matter the result at the ballot box.

“We’re really reaching a crunch point because the fossil fuel industry needs to be phased out in the next couple of decades. That’s the only way we’ll get on top of this problem. The only way.”