For one woman, being an activist for human rights is not an option. It is an imperative. Jenina Ibañez reports. 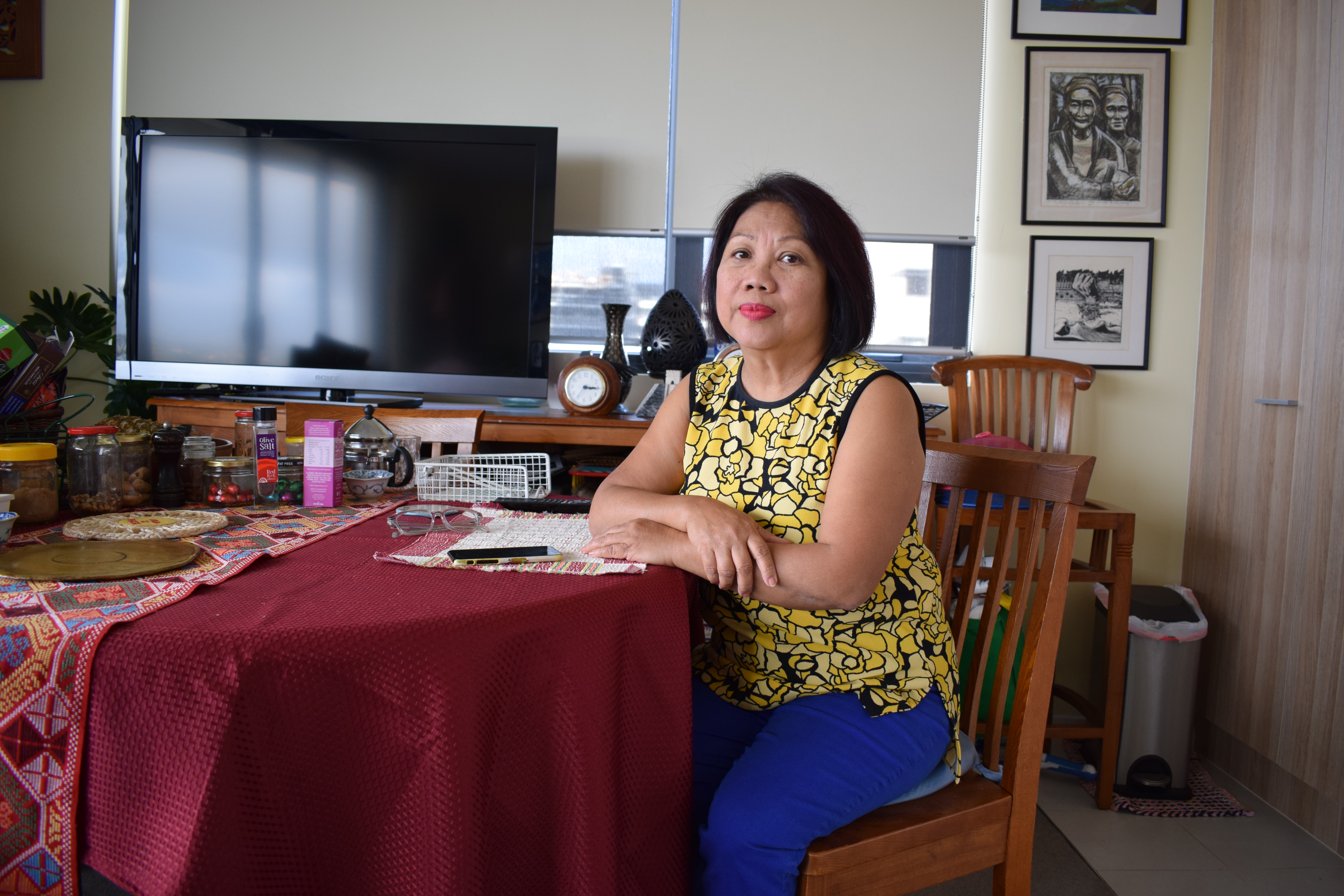 There are only around a dozen of them. Dressed in purple shirts and masks, the men and women stand in the heart of downtown Melbourne holding up signs to shoppers, city workers and tourists. They’re protesting the misogynistic comments of a president more than 6000 kilometres away. Their leader is activist Melba Marginson.

“In the Philippines today, there are massive demonstrations!” she declares into a megaphone. They are protesting Philippine President Duterte’s threat to shoot female rebels “in the vagina,” and by extension, the extrajudicial killings that have marked his presidency for the past two years.

At Federation Square on this day, passersby barely glimpse at the small protest. And of more than 50,000 Filipinos living in Victoria, just this handful are present.

For Marginson, this is frustrating – indeed, disappointing. She’s a passionate, resilient woman. When she sees something she considers unjust, she quickly jumps to creating the project or organisation that will serve as her response. She rarely rests – always eagerly planning for the next meeting, taking calls, inviting her vast network to her next event. Years of resistance and advocacy in the Philippines had prepared her for violence and pushback. But a long way from the swell of protests in Manila, is she prepared for indifference?

Marginson began her activist work as a university student in Quezon City, north of Manila. It was the early ’70s, and students were expressing their discontent with then President Marcos, who would soon proclaim martial law. Like many of the students at the University of the Philippines, she joined the rallies and barricades. She didn’t so much see her activism as a choice, but an imperative – a response to the times.

“You can’t not be involved,” she says. Regardless of interests, students found a way to participate politically. Devout Catholics joined the Student Catholic Action. And Marginson, an avid theatre lover, co-founded the UP Repertory Company. “When martial law was imposed they clamped down on student organising,” she says.

But it came back through theatre. The students would use symbolism in costuming to express to audiences the plight of the nation. They took their plays everywhere, including  the slums.

She continued her political activism long after graduation. Her membership to the communist party at the time brought her to the mountains, where she tried to be a guerilla fighter. Finding that she was not physically cut out for the job, she came back to the city and concentrated on the open mass movement, fighting for raising teachers’ salaries.

These are the experiences she brought with her when she moved to Melbourne in 1989, after marrying Australian academic Simon Marginson. When she saw that Filipino migrant women were often victims of domestic abuse in Australia, she applied her advocacy skills to her new country and helped campaign for expanding the Domestic Violence Provisions of the Migration Act.

“I may have left the revolution in the Philippines but I’m waging a revolution here.”

She’s joyous when she recounts the gains she and her friends have made in the past, chuckling to herself as she recites their names. But she shifts to a quiet determination when she explains the work that needs to be done. She’s expanded her horizons in Melbourne, tackling issues surrounding migration and race. She was executive director of the Victorian Immigrant and Refugee Women’s Coalition from 2007 to 2016.

She attributes her activist stamina to what she calls the “fighter tradition” that she comes from. This goes back to the Philippine resistance against its colonisers, she explains. With the many injustices occurring in the Philippines throughout its history, each generation picks up the know-how to gather together, taking to the streets to demand change.

But she’s distant from the tradition that spurred her. On the day of the Manila march in support of Duterte critic Chief Justice Sereno, who was ousted by the Supreme Court, she sat at her quiet Maribyrnong apartment and watched the live stream. She was excited to see her friends come together, but also worried that the activists would get hurt – the perennial concern of those who lived through the clubbing of rallyists during martial law.

However, she refuses to sit idly. As a gesture of solidarity and to convey their indignation, she and fellow Filipino Australians have been holding rallies against President Duterte. They’re part of an international movement that spans the US and Japan, criticising the Philippine President’s war on drugs that has taken the lives of thousands.

She’s not sure if their work has an effect on the administration, but they do it to educate the international community so that the critics will grow in numbers. Here in Melbourne, Marginson says, it’s a difficult task.

She struggles to persuade people to donate to the cause. While she acknowledges that Filipino-Australians have families and other priorities, she sees their comfortable lives in Melbourne as a far cry from that of the poor Filipinos who still manage to offer what little they have to the movement.

She’s dismayed at the passivity of her copatriots here in Melbourne, who present a contrast to her enthusiasm. At times, she sounds irritated with them. “Selfishness,” she calls their response. “Lack of looking at their situation in relation with the less fortunate.”

She also can’t get enough people to take part in rallies. “If I [were] an easily disappointed person, [I’d] give up,” she says. While she says that she sees beyond that, it does make her worry. What if, she wonders, there comes a time when she’s the only one left protesting?

Marginson conveys a kind of longing for the multitude of fellow Filipinos that come together in protest. In Melbourne, she fears not a difficult fight but a lonely one.

When asked about this distance, though, she’s almost offended. She doesn’t really talk about her country like it’s far away. She picks up her phone and scrolls through her social media feed, filled with news and her friends’ updates on Philippine politics on the ground.

“The optimism of my comrades continues to inspire me,” she says brightly, like she’s proud of their work. And she’s working on building her own crowds here, ones that she hopes will succeed her.

She’s mentoring millennials, and has co-founded a group called Project Kultura, which bridges Filipino-Australians to the Philippines. It’s not a political group, but it’s one that she hopes can deepen Filipino-Australians relationship to the country past what she calls bastardised dances and costumes. She hopes to build a community that counters indifference.

She sometimes notes the success of others who have chosen to work in different fields and wonders what would have happened if she had done the same. But while not religious, she associates herself with Sister Patricia Fox, the Australian missionary who was ordered to leave the Philippines for participating in “illegal political activities”. (This order has been overturned but Sister Fox may still be deported over alleged breaches of her visa.) “This is the cause I’ve chosen, Marginson says, smiling. “I’m a missionary, am I not? This is my mission.”

She and her fellow activists are drafting an open letter to the President. They’re planning on making a podcast to influence a broader audience beyond the passersby of Federation Square.

Marginson has also founded a group that helps the children of victims of domestic abuse and an organisation that helps culturally diverse people find work.

Her apparently limitless energy is fueled by need, she explains. She hears first-hand the plight of Filipino migrants at her interpreting job, and she’s in touch with home, scrolling through the unending news on her phone. Just like she did in the early days of martial law, she treats political involvement as a necessity. And long past some others like her have given up activist work and as she settles into her own retirement, she says, “‘Di ako titigil.” I will never stop. 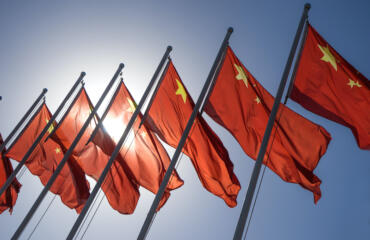 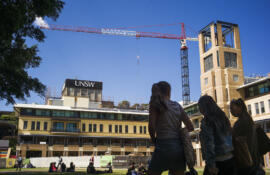