Efforts to clean up Victoria’s recyclable rubbish have been thrown a curve ball by COVID-19, as deliveries fill up bins and household frustrations overflow. Petra Stock reports on the mess spilling into the streets of Yarra Council. 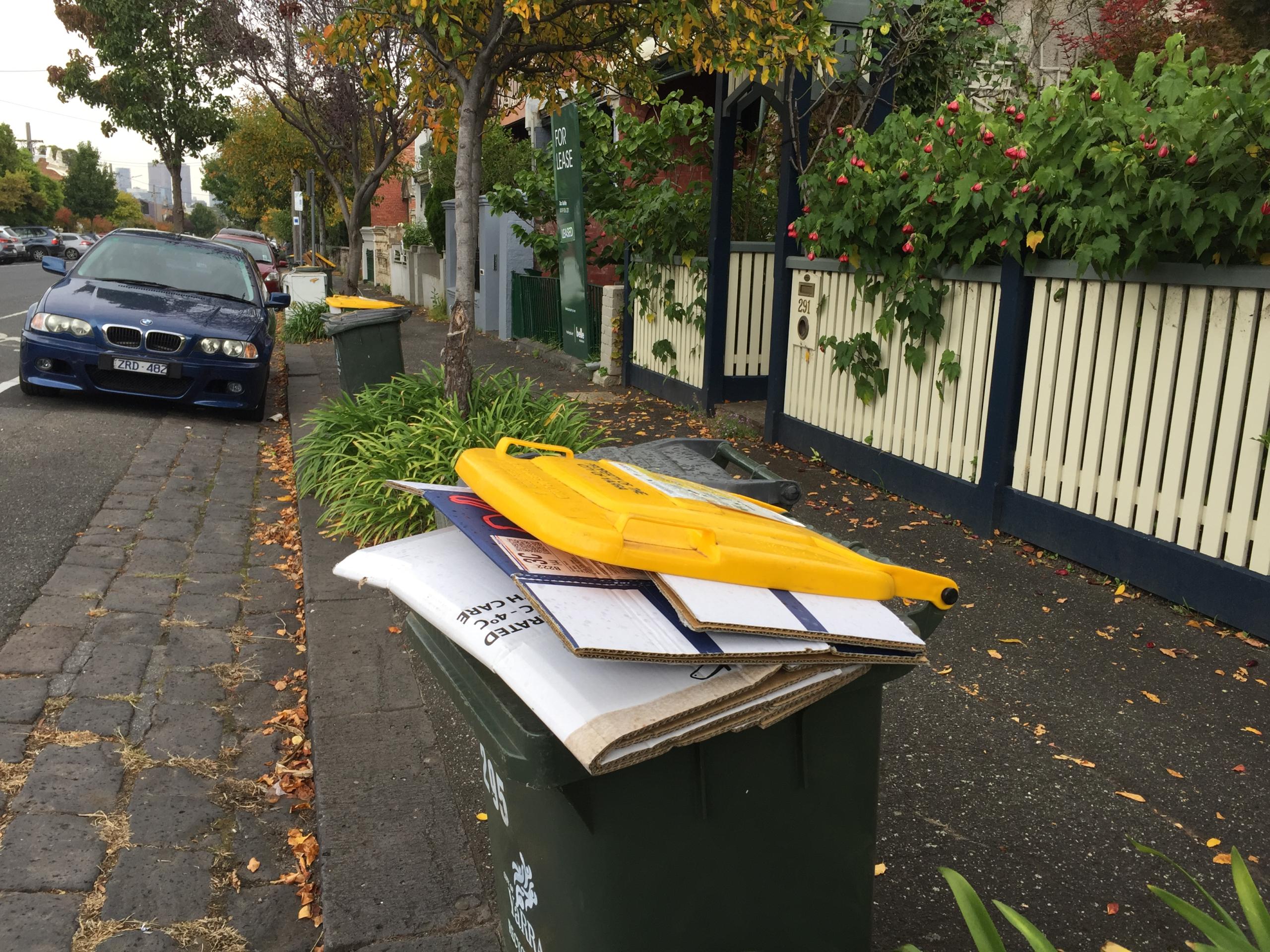 The explosion of deliveries to households since the pandemic has resulted in an “extraordinary amount of cardboard”, according to Yarra’s city works department. "The kerbside system was not designed to cope with the volumes of cardboard now flowing in and out of some households”. Photo: Petra Stock

Words and pictures by Petra Stock

Yarra City Council is trumpeting it a “waste and recycling revolution”. And what’s a revolution without a ruckus?

“I don’t have room for a glass bin,” declared Christine, one of several residents to voice vehement objections to the rubbish situation at a recent council forum on the changes.

“The place looks like a ghetto and it needs to change.”

Residents lining up to object to the new rubbish collection regime well outnumbered the two speakers in favour. 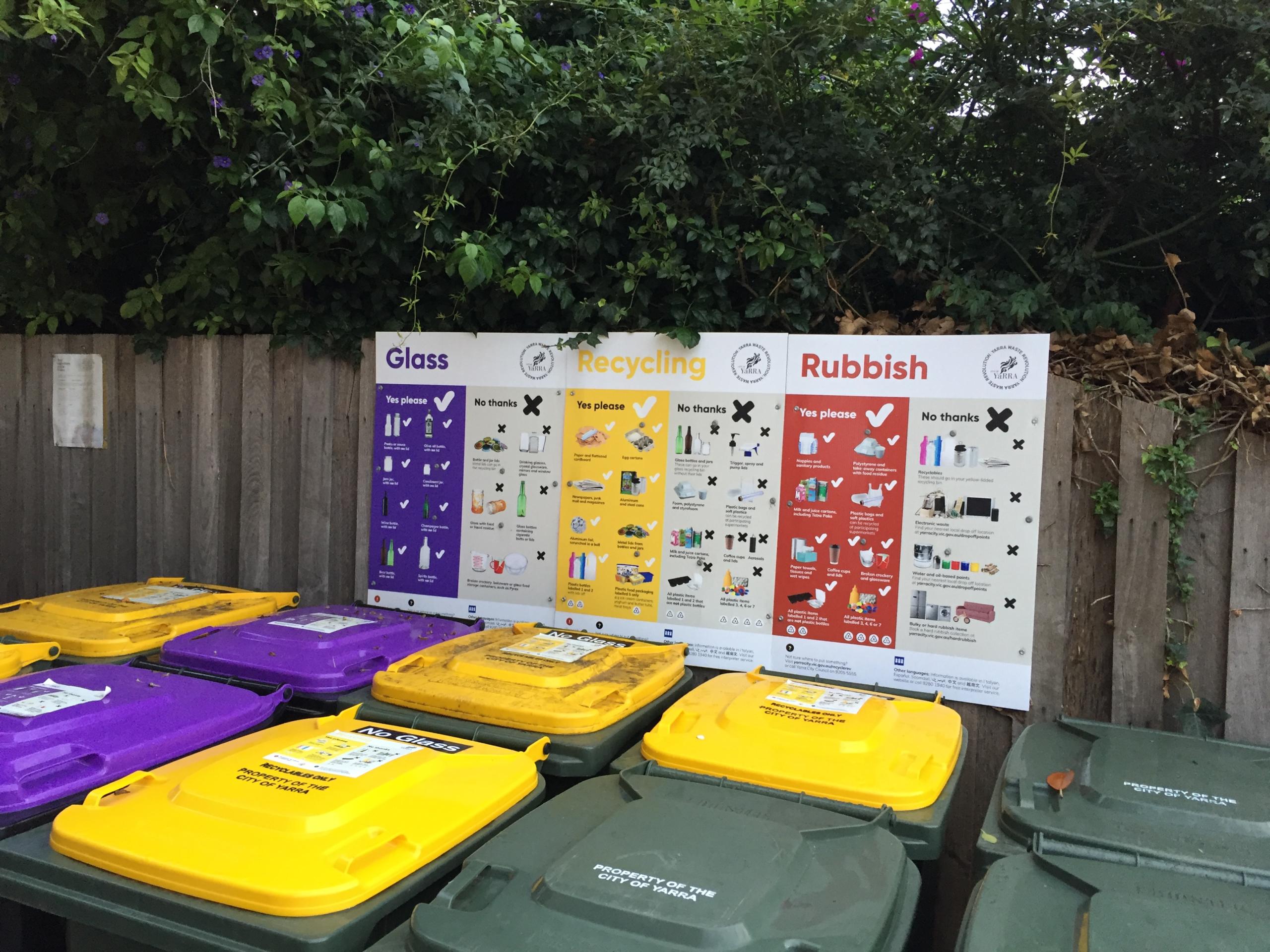 Yarra is among the first of Melbourne’s municipalities to begin rolling out the kind of four-bin rubbish and recycling system the Victorian Government expects all councils to adopt by 2030.

The revolution began quietly enough. Just before Christmas a new purple bin materialised in the driveways and courtyards of 44,000 in densely occupied inner metropolitan Yarra, which stretches from leafy Fitzroy North to Cremorne, a hotch potch precinct of residential, industrial and commercial lots.

Yarra is among the first of Melbourne’s municipalities to begin rolling out the kind of four-bin rubbish and recycling system the Victorian Government expects all councils to adopt by 2030.

The state is changing how it recycles after China decided to no longer accept glass, paper and plastics from Victoria. The decision triggered a rolling waste crisis as mountains of potentially recyclable materials were stockpiled, or sent to landfill. The Victorian Government launched measures totalling $96.5 million to clean up the mess.

The four bins are part of the solution: red for general rubbish, purple for glass, yellow for paper and plastics and green for organics.

Yarra was first to trial the system in Abbotsford in 2019. The Greens-dominated council has now rolled out the purple glass bin and a new collection schedule to all households, which the city works department has described as a “huge undertaking”.

But if Yarra’s experience of the transition thus far is anything to go by, changing the recycling habits of 6.7 million Victorians won’t be easy.

Previously, Yarra residents had the standard pair of rubbish and recycling bins which were each collected weekly. Now, the purple glass bin makes three. The fourth and final green bin, for food and garden organic waste, is yet to arrive.

Most residents are happy to sort their glass from paper. This overcomes the shortcomings of the previous “co-mingled” recycling system, which as Mayor Gabrielle De Vietri explains was not up to the task. Paper and cardboard was often “strewn with glass splinters” and unsuitable for recycling.

Where things get messy in the new regime is the accompanying shift to alternating fortnightly recycling pick-ups – purple one week, yellow the next.

Many households are these days accumulating so much cardboard and plastic packaging over a fortnight that it won’t all fit in the yellow bin. So, despite the introduction of a fortnightly glass collection theoretically freeing up a bit of bin space, the streets of Collingwood are awash with paper.

Yarra is struggling with what Infrastructure Australia describes as a COVID-19 “curveball” thrown at the nation’s waste system, one that appears to be enduring beyond lockdown restrictions. Cardboard and plastic packaging from online shopping and food delivery have increased household waste by 20 percent.

It’s an “extraordinary amount of cardboard”, Yarra’s city works department’s stated, “the kerbside system was not designed to cope with the volumes of cardboard now flowing in and out of some households”.

An audit of 34,600 glass, recycling and rubbish bins across the municipality found one in four yellow bins so full the lids wouldn’t close. Eight percent had excess recycling beside them. Glass bins, on average, were less than half full. 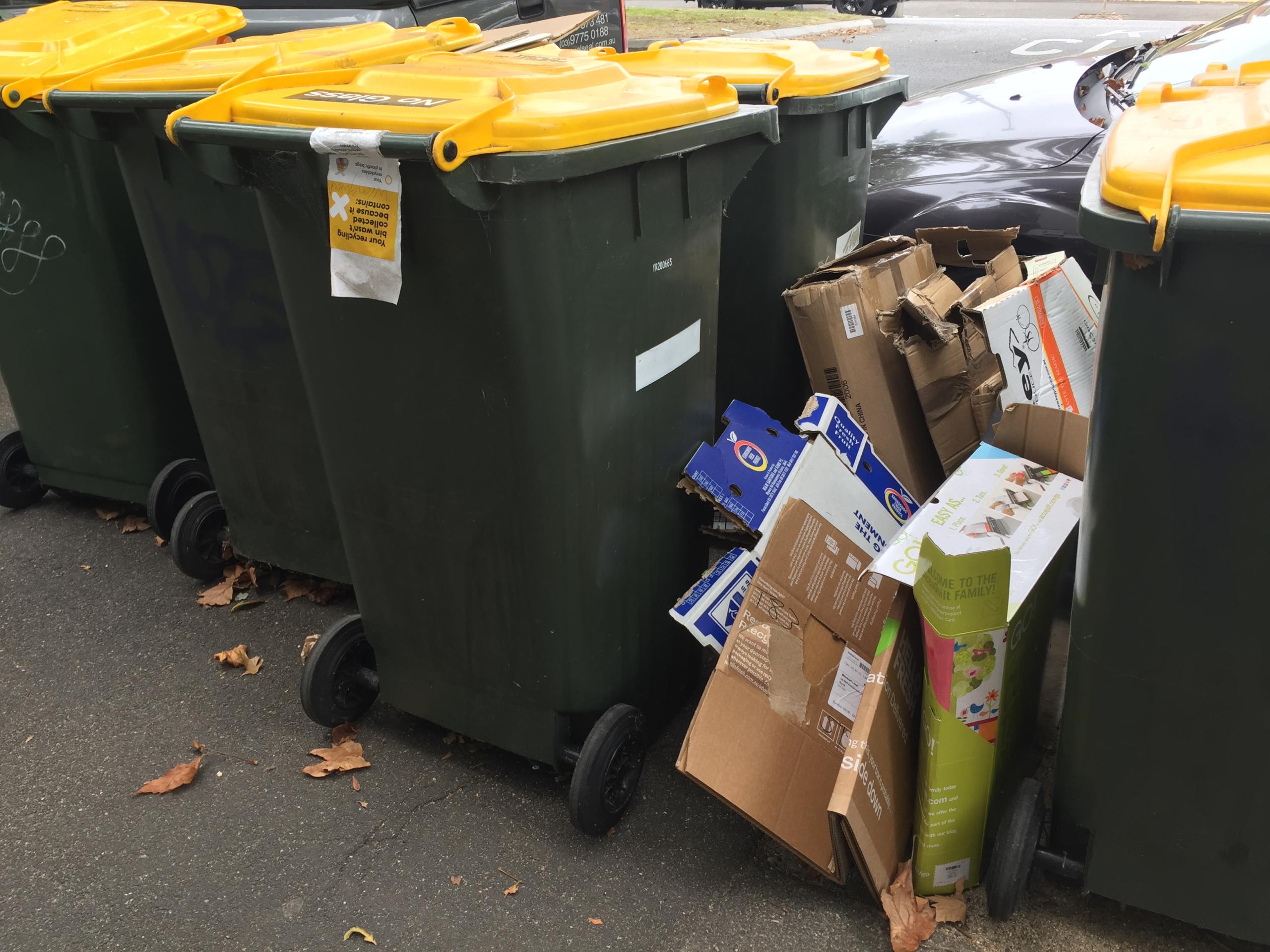 Mayor Di Vietri says the council is open to making changes,if “there’s a huge problem somewhere”. But she argues that overall, the new system is “working really well” and it’s too early to change tack.

The fortnightly recycling schedule is the now biggest issue “by a long shot” facing the newly elected council, says Yarra Councillor Stephen Jolly. Of those residents contacting council with their feedback, he says there are “probably nine to 10 emails that are against” the schedule for every one in favour.

More than 2300 locals have signed a petition calling for a return to weekly recycling. The petition notes it “is not against the separated glass bins which residents support”.

While residents might be causing a stink, there are no plans to ditch the new waste system.

At a meeting in March, Cr Jolly proposed a motion to bring back weekly recycling, but was defeated by the votes of the Greens majority.

Mayor Di Vietri says council is open to making changes if “there’s a huge problem somewhere”. But she argues that overall, the new system is “working really well” and it’s too early to change tack.

Instead, she says, council is working one-on-one with residents, encouraging them to squash boxes and cartons, offering a larger yellow bin on request, and providing drop-off points for excess recycling.

Around 1500 households have requested a larger bin, but it’s not a solution that works for everyone. Cr Jolly says smaller terraces and multi-unit developments often don’t have space to store them.

Waste and behaviour change expert Jenni Downes points out that fortnightly recycling collection is “quite standard” across much of Victoria and New South Wales and isn’t usually a problem if recycling bins are big enough.

Some 72 of Victoria’s 79 local governments have fortnightly recycling. The handful retaining weekly pick-ups are mostly inner-city councils like Moreland, Melbourne and Port Phillip, suggesting a need for smaller bins and more frequent collection.

The revolution’s next step, endorsed by council last February, adds the green-topped organics bin to the mix. And with it, an accompanying shift to fortnightly rubbish collection despite the Victorian Government’s expectation that councils collect “general waste on a weekly basis”.

Ms Downes says provided organic waste is collected weekly, fortnightly rubbish is usually fine. For most people, she says, “the yucky stuff in the rubbish bin is food”, and that should now find its way into the organics bin.

However, Ms Downes cautions, the system could be problematic for those trying to dispose of nappies or medical waste, and councils needed “a fair and accessible option for these households”.

Lessons from Yarra’s rollout could prove useful for other councils shifting to the four-bin system.

When asked what council has learned, Mayor Di Vietri replies “communication”. She says residents “need to hear things three or four times” to bring “people along with us” before and during the rollout.

Communication was also highlighted by residents when they gathered in an online meeting to air their grievances with councillors.

“The community’s been extremely vocal on this,” pronounced one man.

“We’ve been continually ignored and quite frankly it’s just not good enough!” 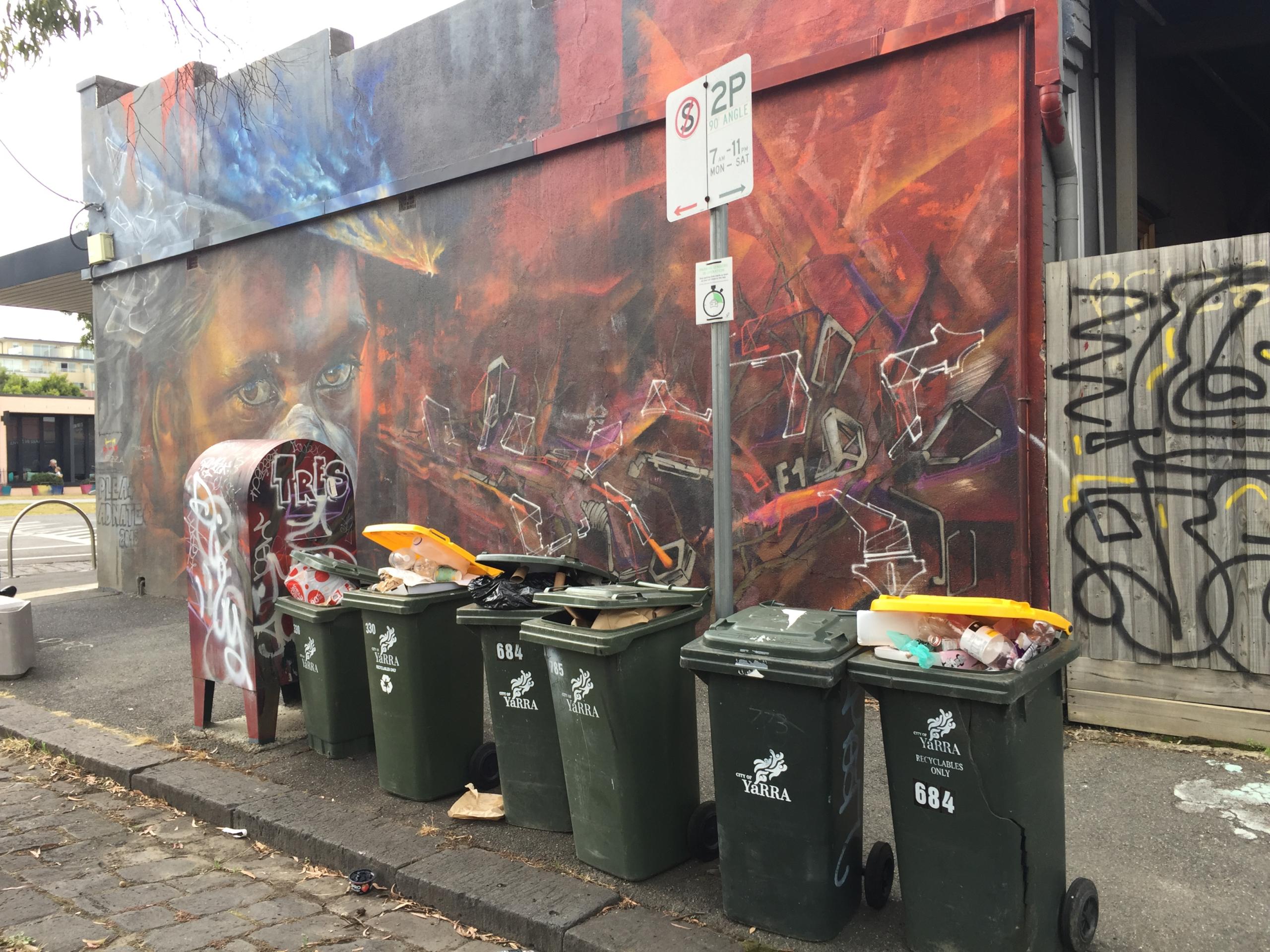