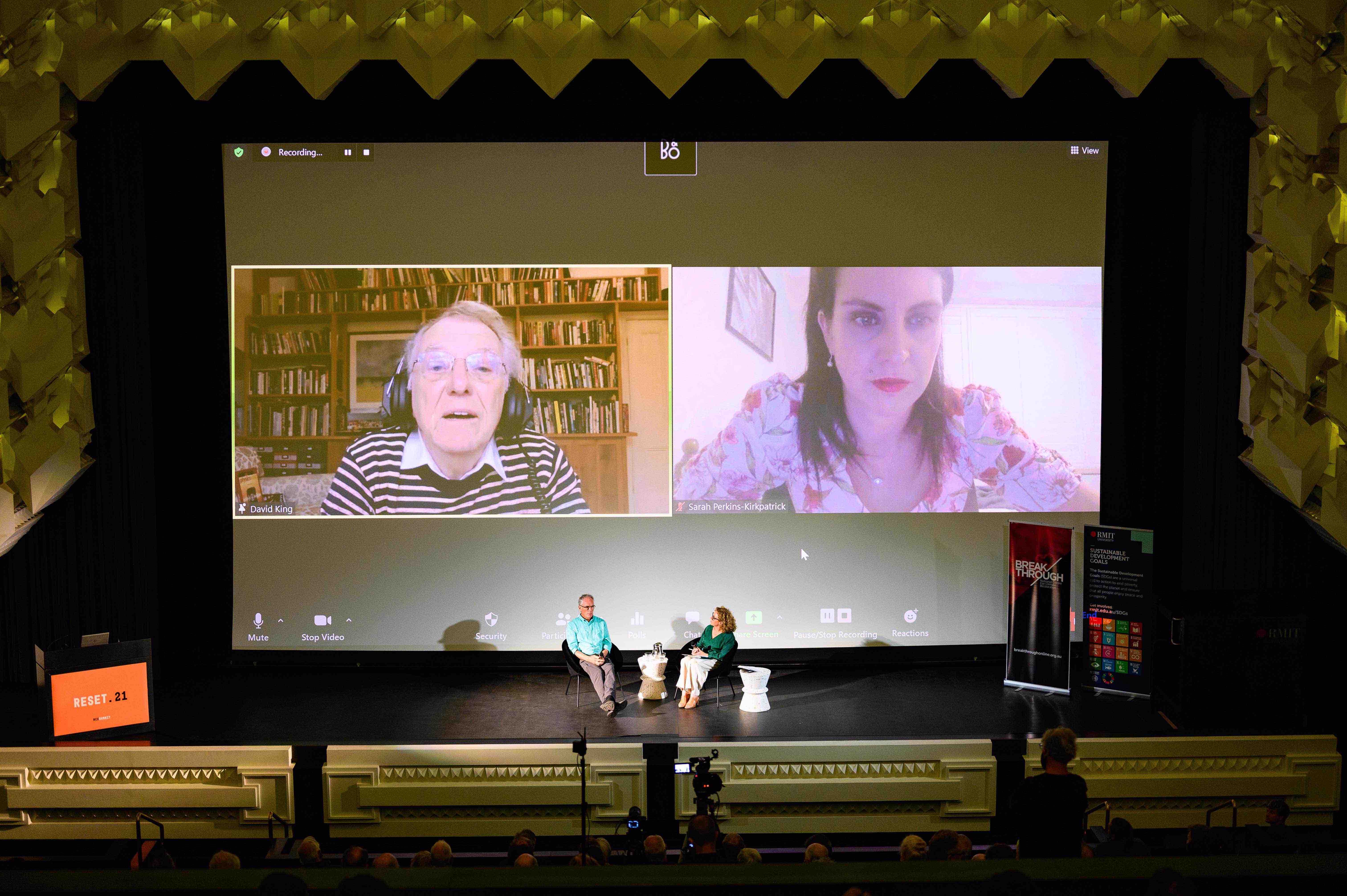 “What we do over the next three to four years, I believe, is going to determine the future of humanity. We are in a very very desperate situation," Professor Sir David King, appearing by video link with UNSW climate expert Dr Sarah Perkins-Kirkpatrick. Photo: Julian Meehan

Humanity has less than a five year window to take decisive action on climate change, the UK’s former chief scientist told the opening session of the National Climate Emergency Summit in Melbourne.

“We have to move rapidly,” said Professor Sir David King, founder and chair of the Centre for Climate Repair at Cambridge University and a former advisor to both the Blair and Brown governments.

“What we do over the next three to four years, I believe, is going to determine the future of humanity. We are in a very very desperate situation.”

King had previously advised the UK government that limiting global warming to 1.5 degrees was vital to avoiding uncontrollable environmental changes in the polar icecaps and Himalayas, but said he now realised this was wrong and the crucial point had already been crossed.

“I am afraid the tipping point in that respect has been passed, and therefore we have to reverse these processes.”

He said emissions reductions, while imperative, could no longer control the crisis, and that radical geo-engineering interventions had become unavoidable. 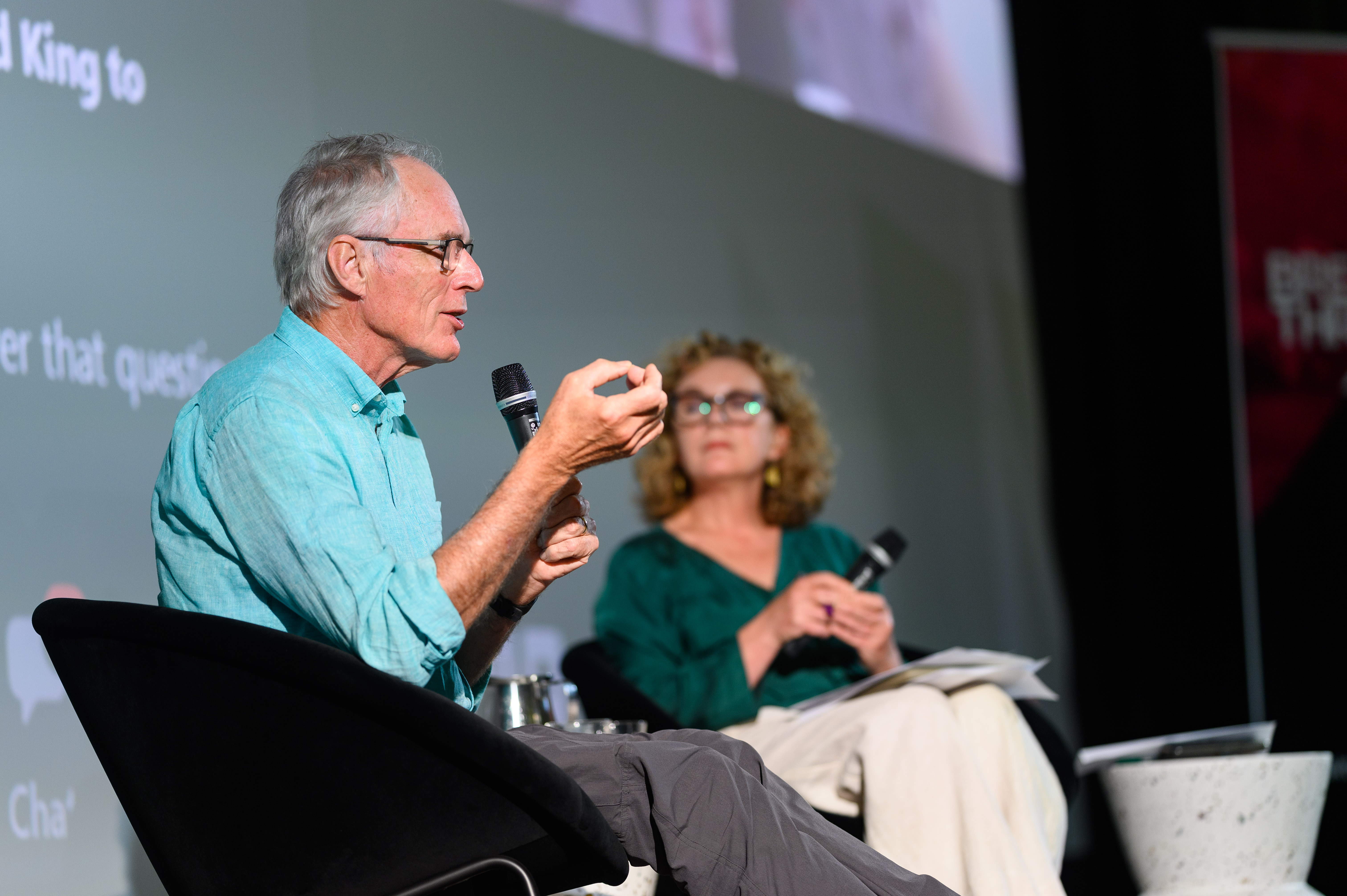 The bleak assessment came in the opening forum of the 2021 summit, a panel session in which King was joined by Australian climate policy analyst David Spratt and University of New South Wales climate scientist Dr Sarah Perkins-Kirkpatrick to explore questions around whether enough was known about the climate emergency to set the right goals and timeframes for action.

The panellists agreed that the science was disturbingly clear and that a failure by key decision makers to acknowledge the depth of the crisis was preventing adequate goals and timeframes being set.

In his presentation, David Spratt, research director at Breakthrough National Centre For Climate Restoration, said climate tipping points had already been crossed in the Arctic, the Great Barrier Reef, and a significant section of Antarctica, meaning that current greenhouse gas levels had already pushed these ecosystems beyond the “point of no return”.

“The coral reefs will, honestly, be gone in the next ten years.”

As Australian government leaders continued to debate whether to commit to a zero-carbon target by 2050, Spratt said it was critical to reach net zero by 2030.

“A 2050 timeframe will not prevent catastrophic outcomes,” he said, decrying the “profound ignorance” of key decision makers in government and industry.

“There is not a single federal MP, a single ASX200 director, or a single person at APS executive level who acknowledges the full reality of the crisis.”

On 1 February, Scott Morrison told the National Press Club the government’s goal was to reach “net zero emissions as soon as possible”, though he stopped short of committing to a 2050 target. Whether he commits to a mid-century target will depend on his ability to quell a vocal group of Nationals MPs and senators, who have declared they will “cross the floor” should the government move to legislate a 2050 deadline.

Spratt said that while the earth is 1.2 degrees Celsius above the pre-industrial average, the current level of greenhouse gases in the atmosphere will lead to 2 degrees of warming in the long run, even if global emissions were cut to zero overnight.

“So when people talk about carbon budgets for 1.5 or 2 degrees of warming, just don’t believe them.”

Charting heatwaves in Australia over the past 70 years, she presented data showing how they have become hotter, longer and more frequent because as the average temperature has risen, previously normal weather fluctuations suddenly became extreme.

“Over the last 40 years these trends have really started to ramp up.”

Perkins-Kirkpatrick also discussed improvements in the science of attribution – identifying how much climate change has influenced  extreme weather events as opposed to natural climate variations.

Climate scientists can now examine an extreme weather event, such as Australia’s 2019-20 “Black Summer” bushfires, and run it through climate models to see how often they would expect it to occur with climate change as well as at pre-industrial temperatures. The difference between the two probabilities is called the “anthropogenic signal” in the extreme event.

Perkins-Kirkpatrick said while the signal is difficult to find in some kinds of extreme weather, it is easy to identify when it comes to extreme heat.

“No matter what heatwave we look at, there will always be a signal because of climate change.”

But it was Sir David King, the founder and chair of the Cambridge Centre for Climate Repair, who offered the most confronting assessments around the extent of the problem and the potentially powerful solutions.

He recalled that in 2015 he led a risk analysis project with China and India, which together account for over a third of the global population. “What we concluded from this is really quite frightening.

“Five or ten years from where we are now, we [could] see major unexpected risks emerging such as rice crop failure causing massive problems feeding the populations of South East Asia and China.”

China’s biggest concern in the study was the risk its national rice crop would fail, putting hundreds of millions of people on the brink of famine.

“[In 2015] that risk was as low as your house burning down,” he said, “but it becomes very likely it will happen every year with a two to three degree temperature rise.”

He also displayed new flooding projections for the Mekong Delta in southern Vietnam, the world’s largest rice farming region, which showed the entire area would be flooded annually by 2050.

“Of course, if the rice paddy fields suffer sea incursion they will no longer be productive for rice.”

“We’re looking at a region of the world that by mid-century will have something like 300 million people looking for somewhere else to live.”

King said emissions reduction alone would not be enough to avoid catastrophic ecological and agricultural destruction and that radical greenhouse gas removal and geo-engineering techniques would also be required.

One of the key functions of the Centre for Climate Repair, which King founded in 2019, is studying and developing these new techniques, with the aim of removing 30 to 40 billion tons of carbon dioxide annually.

One promising new technique was ocean surface iron fertilisation, which stimulates the growth of phytoplankton, a key building block of ocean ecosystems and the global carbon cycle. The phytoplankton have the dual benefit of removing carbon dioxide directly from the atmosphere, as well as stimulating “a massive increase in ocean fish stocks”.

“We believe [it] would take up about 30 billion tons of greenhouse gases a year, so this one technique could deliver a very big part of what we are aiming for,” said King.

Asked about concerns large-scale geoengineering could have harmful unintended consequences, King assured the audience that no technique would be used unless negative side effects had been ruled out.

“Let me say it once: there is no technology we would roll out that would cause any significant damage anywhere in the planet.”

While such emerging technology provided a glimmer of hope, King said it would mean nothing without extreme emissions reduction and an almost immediate global transition to green power.

“We have left this very very late. We can still manage it, but we have to operate along all of the directions I have suggested.”

The National Climate Emergency Summit #Reset21 forums are running online in Melbourne over February. For more information, and to watch this session and others, click here.