Emerging research from around the world suggests women find it harder to get to sleep and stay asleep than men. Fia Walsh explores the issues keeping women awake nights. 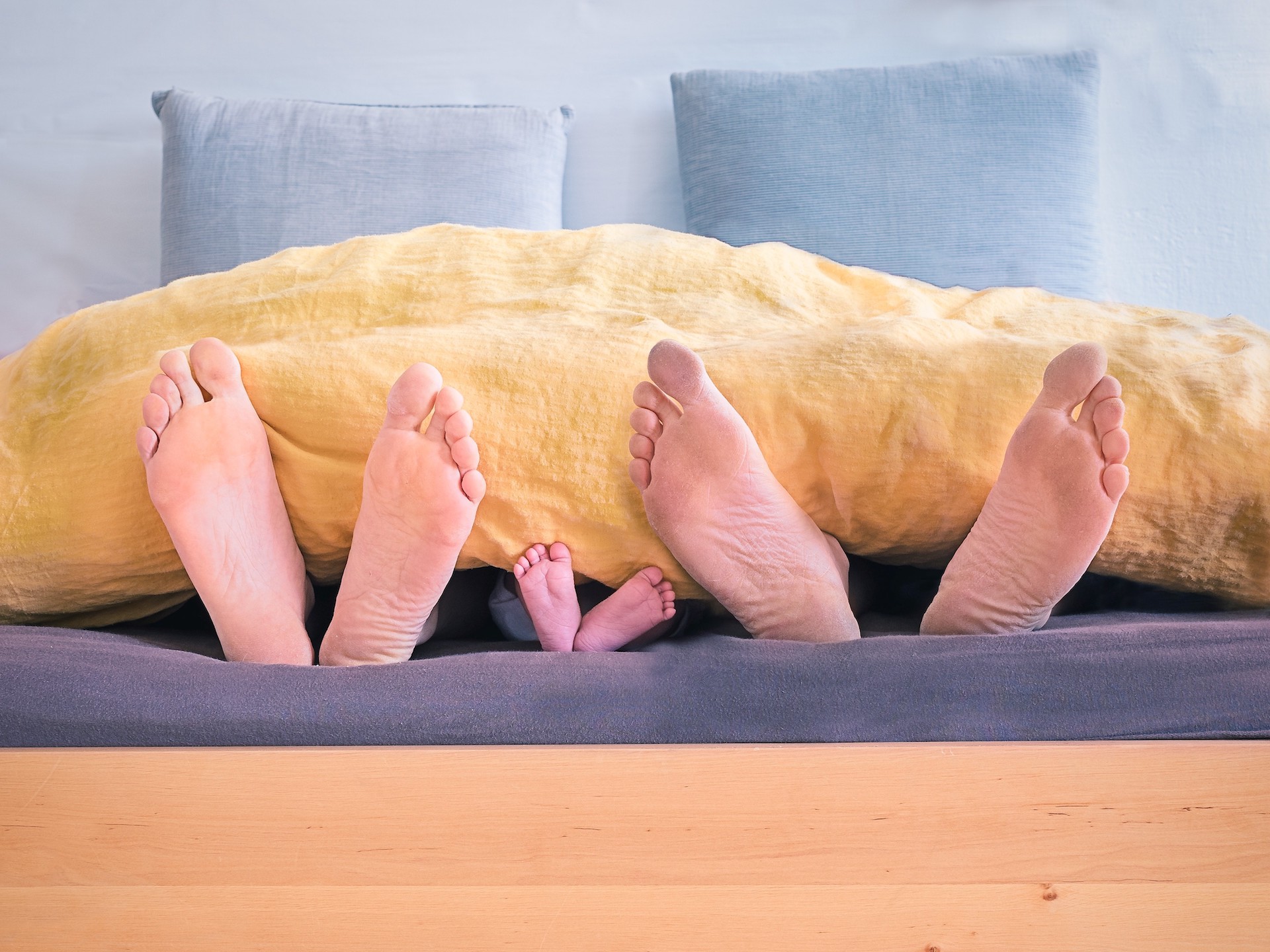 The baby cries and Jessica Leski’s eyes snap open, adrenaline shooting through her body. Is he okay? Is he too hot, or too cold? Is he hungry? She listens as he grunts and grumbles himself back to sleep – false alarm.

It’s the middle of the night in Melbourne’s south-east suburbs, and Leski is now wide awake while her husband sleeps soundly beside her.

She is not alone. Emerging research from around the world suggests women find it harder to get to sleep and stay asleep than men. Biology is part of the story – hormones, periods, pregnancy and menopause can all disrupt sleep. Throughout her twenties, Jessie Crabb, now 29, has noticed a link between her anxiety and trouble sleeping. “My anxiety goes on a spiral loop and it just replays certain things.” Photo: Supplied by Jessie Crabb.

But Dr Stefanie Plage, who studies the social determinants of health at the University of Queensland, says the sleep gap goes deeper than that, as gender inequality works to keep us up at night. And it’s an issue we’re only just beginning to wake up to.

“As a country we see ourselves as very open to gender equality,” says Dr Plage.

“But sleep is something where the rubber really hits the road … we see the effects of men and women ‘doing gender’ overnight.”

What you’ve always been told is correct – most adults should aim for seven to nine hours sleep a night. Failure to get enough shut-eye lowers productivity at work, and increases risk of illnesses like heart disease, diabetes and depression.

According to academics who analysed over 25 years’ worth of sleep studies, the link between insufficient sleep and premature death is “unequivocal”.

Figuring out how much – or how little – sleep we’re getting can be tricky. Most studies rely on self-reported data, and what makes a ‘good’ night’s rest can vary depending on culture, life stage and individual need.

But it’s clear that many are not sleeping enough, with women hardest hit. Pulling together data from several studies, consulting firm Deloitte estimated that over a fifth of Australians are falling short on sleep. Most of them are women: the findings revealed a gender sleep gap at every age.

A 2016 national sleep survey by the Sleep Health Foundation found that while on average women spent a bit more time in bed than men, they were more likely to report difficulty falling asleep, waking during the night, and feeling unrefreshed in the morning. Sleepiness, fatigue and irritability were also more likely to affect women during the day.

One thing that helps women sleep seems to be gender equality. A 2018 study of some 14,000 couples across 23 European countries found that gender equality is linked to better sleep for both men and women alike. So while a small sleep gap still exists in Norway – which scored highest on the gender equality measure – a Norwegian couple is four times more likely to sleep soundly than their Ukrainian counterparts.

Source: 2016-2017 Deloitte Access Economics report for the Sleep Health Foundation, ‘Asleep on the job: Costs of inadequate sleep in Australia’

So what does sleep have to do with gender?

For one, women are more likely to get up and care for children. Dr Plage’s research with colleagues at the Life Course Centre found that on average, childless women slept an hour more than childless men each week. But add kids into the mix and that pattern began to reverse. For couples with three children, the mothers were getting three and a half hours less sleep than the fathers.

Jessica Leski feels supported by her husband, Josh, and believes they have an equal relationship. But when it comes to caring for their one-year-old son, she has noticed some differences.

“Why in the middle of the night does he have to yell out ‘Mummy’? I wonder if he yelled out ‘Daddy’, would my partner, you know, wake up and jump out of bed?” says Leski.

The 39-year-old documentary filmmaker says it often falls on her to worry about practical concerns that Josh does not consider.

“I’m lying in bed thinking, ‘I need to make sure this is washed for him’, and ‘what does he need tomorrow in his backpack?’, and ‘I need to research new pushers because he’s grown out of this one’,” she says.

This ‘worry work’, ‘emotional labour’, ‘mental load’ – call it what you will – is another thing that may be keeping women up at night. You’ve probably heard of the mental load to describe the invisible work that goes into managing a house and family. (If not, this comic by French cartoonist Emma is a good starting point.)

It’s thought that women do the lion’s share of this endless organising, planning, and coordinating. Dr Plage explains that engaging in more mental tasks throughout the day might increase night-time anxiety or rumination about things that need to get done.

Whether linked to the mental load or not, stress and anxiety are also culprits when it comes to losing sleep. One in three Australian women will experience anxiety compared with one in five men, according to Beyond Blue.

Throughout her twenties, Jessie Crabb, now 29, has noticed a link between her anxiety and trouble sleeping.

“My anxiety goes on a spiral loop and it just replays certain things,” she explains.

“Like, ‘Oh, I had to send that email response back that I should have done three days ago. It’s so simple. Why haven’t I done it?’ It can be very petty things.”

The Vancouver native, living and working in Melbourne as an au pair, says she often resorts to naps to get through the day. But this can add to her stress: “Am I not being as productive [as I should be] because I have to go back to sleep? Do people in my life see me as being lazy?”

Mental health affects men’s sleep, too. Expectations of men to fill the traditional breadwinner role mean they are more likely to be kept up stressing about household finances, being employed and the next day’s work.

Dr Plage says that, for both genders, “sleepiness has an impact on productivity and vice versa. If you’re worried about what happens at work, it affects your sleep.” For Melbourne couple Cass and Steve Whitaker, the search for a good night’s sleep has led them to separate bedrooms, improving the relationship, intimacy and waking up rested. Photo: Supplied by Cass Whitaker)

For content manager Cass Whitaker, 30, the reason for her trouble sleeping was more tangible: the person lying beside her.

Where Whitaker was a morning person, her partner Steve liked late nights. Where she wanted silence, he preferred background noise. While he snored, she would toss and turn before shoving him awake.

Whitaker says it became clear their trouble sleeping was bleeding into the relationship, as bitterness and resentment built between them.

“It was like getting stuck in bad traffic,” says Whitaker.

“You just feel that rage start to build – you’re so angry at them for being able to fall asleep so easily when you can’t.”

When she suggested sleeping separately, Steve jumped at the idea. “It’s completely changed our relationship for the better,” says Whitaker.

At first, the decision to sleep apart raised eyebrows of concerned friends and family. But the couple – now married – agree that both their relationship and intimacy have improved. And so has Whitaker’s sleep. She says that while there are still some restless nights, it has made a big difference not being disturbed by Steve’s late bedtimes or early alarms.

“I’d never go back to sharing a room with him now,” she says.

While sleeping separately may not be for everyone, finding ways to help all Australians rest easy is crucial for our health, happiness and productivity as a nation. Along with exercise, cutting down on screen time and skipping that second coffee, the answer may lie in gender equality.

Dr Plage says that men and women alike need to rethink assumptions about work, caregiving and parenthood. “It’s not enough to target just women’s sleep independently,” she says. “We need a better understanding of sleep not being just a biological thing but also a social experience.”

There’s something to think about in the wee hours.