In one of the few good news stories of 2020, Australia’s venerable newswire AAP was hauled back from the brink. The women fighting to keep it alive were centre-stage – COVID-style – at this year’s landmark online AN Smith Lecture on Journalism. Benjamin Silvester reports. 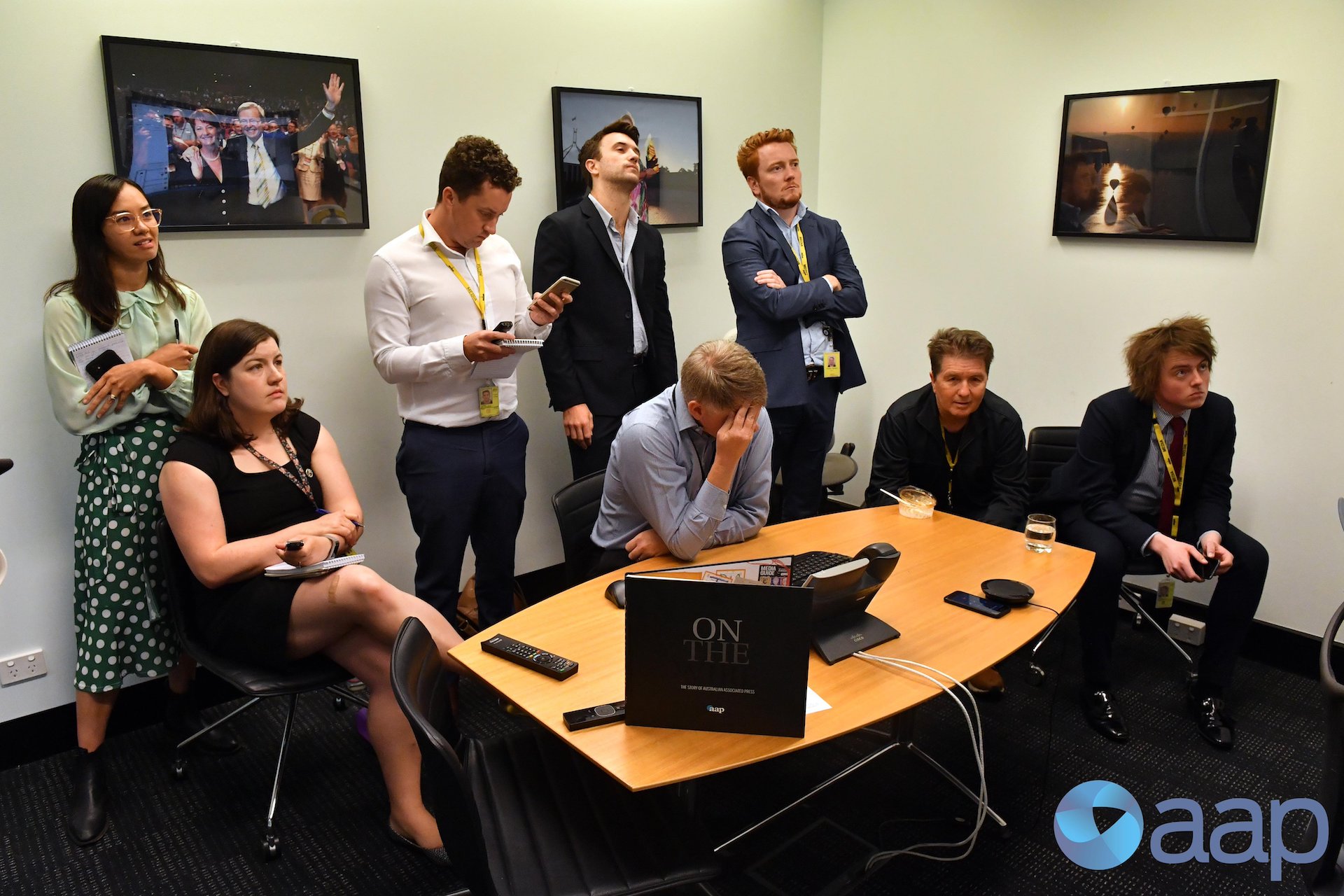 For two long weeks back in March there was a strong prospect Rupert Murdoch’s News Corp would soon be in a position to further expand its domination of the Australian media market.

The venerable Australian Associated Press newswire, a critical service providing independent, rigorous, up-to-the-minute reporting to news organisations large and small, announced on 3 March it would be forced to close down after 85 years of operation, and News Corp was waiting in the wings with plans for a wire service of its own.

AAP had been left with little option after News Corp and Nine, which together owned almost 90 per cent of the company and provided the vast majority of its revenue, announced they were pulling out. News Corp’s intention to fill the space left by AAP emerged just days later, including plans to poach the newswire’s highly-regarded courts and sports reporters.

That AAP was ultimately rescued by a largely anonymous group of philanthropic benefactors became one of the few good news stories of 2020. And for CEO of the revived newswire, Emma Cowdroy, it represents a vital rearguard in the fight against media monopoly in Australia.

Had AAP collapsed “there would be no other option” for newspapers and radio stations across the country other than to take News Corp’s articles and to pay  for the privilege, Cowdroy observed in delivering the University of Melbourne’s prestigious AN Smith Lecture in Journalism this week. The Murdoch-owned company already controls 70 per cent of Australia’s newspaper circulation.

“They wouldn’t have a choice … unless they want to go and spend what it costs us to get the news all around Australia to put it into their publications, or they just won’t run it at all,” said Cowdroy.

“And either scenario is a disaster.”

Her concerns on this front would appear to be widely shared, with former Prime Minister Kevin Rudd’s recent petition urging a royal commission into the Murdoch media attracting a record-breaking 501,876 signatures by the time it closed last week. While a royal commission is unlikely to materialise, the campaign triggered a move on Wednesday to establish a Senate inquiry into media diversity. In its 82nd year, and in the context of continuing COVID-19 restrictions, the annual lecture was delivered online and in a question-and-answer format, with Cowdroy appearing alongside new AAP chair Jonty Low to discuss the past, future and ongoing importance of Australia’s national newswire with the director of the university’s Centre for Advancing Journalism, Associate Professor Andrew Dodd.

Singly and together, Cowdroy and Low represent a noteworthy shift in media industry dynamics locally and internationally. Cowdroy is the only woman running a news agency anywhere in the world, while Low is the first woman to chair AAP’s board, breaking a succession of 20 men dating back to 1935.

The pair joined the webinar from Canberra, where they had spent the day pitching the merits and importance of the reborn AAP to politicians. Convincing the government to subscribe to AAP’s services has become a key part of their program  to stabilise revenues, a move Cowdroy said would bring Australia in line with other comparable countries.

“Every news wire in a democratic country gets a level of government support, whether that’s funding or it’s by way of subscription,” she said. “And by and large that’s because governments see the value and the importance of a newswire to media diversity in those countries.” The Australian government has previously subscribed to AAP, Low observed. “It’s not a matter of going cap in hand … actually we’ve got a really valuable service, which they used to take.” The challenge, she said, was to remind ministers and bureaucrats how valuable AAP was.

In September, the government announced a $5 million grant for the newswire under the Public Interest News Gathering Program designed to support public interest journalism during the COVID-19 pandemic.

Cowdroy and Low said they hoped much of AAP’s growth over the next two or three years could come from selling its service not just to the government but to corporations. The newswire produces hundreds of news articles every day covering courts, politics, sport and entertainment, a 1.6 million image archive with hundreds of new photos added each day, live alerts and an agenda service.

“AAP has just been sitting in the background, doing its thing,” said Low.

The gear shift into a front-foot campaign to safeguard and grow the newswire represents a stark contrast to the dire situation in March, when nobody from within AAP thought to put the newswire to tender after News Corp and Nine announced they were pulling out.

“Revenues had gone off a cliff, really, over the past few years,” said Cowdroy, reflecting on the fallout of the digital media revolution on established media and newsroom budgets across the board. Coverage of breaking news and providing daily reporting, which is a newswire’s bread and butter, had been hit particularly hard, with news organisations getting more and more content from internet platforms for free. But Cowdroy said she could see this changing.

“I think news consumers are far more aware now of the risk of disinformation and the need to ensure that the news that they’re reading is accurate and reliable. And that’s what a news wire does, it doesn’t overlay ideology or opinion, it is just a straight, factual news report,” she said.

When AAP was sold in June to a philanthropic consortium led by ex-News Corp executive Peter Tonagh, it was transformed into a non-profit organisation. Not only has the new structure allowed the newswire to “run leaner”, it has also reinforced the sense that it’s a totally independent source of public interest journalism.

Just three of the 35 donors in the consortium have revealed their identities: Tonagh, and investment managers Fred Woolard and Kylie Charlton. Andrew Dodd probed Cowdroy and Low on the identity of the other donors, but Low wasn’t giving anything away. “It’s up to them whether they want to reveal themselves or not, and at the moment they’re not known.”

In a separate interview with The Citizen, Cowdroy said there were safeguards in place to insulate the newsroom from donor influence.

“The not-for-profit structure’s perfect,” said Low. “It’s a volunteer board, no one’s getting any money. All of the money we get goes into journalism, we’re the only media organisation in Australia that can say that not a cent goes anywhere else, and we don’t have shareholders to please, we’re in a wonderful position.”

But the transition to AAP2.0 wasn’t painless, with the newsroom halving to just 76 journalists, with those who remain having to do more with less.

The organisation’s finances are also far from secure, with the fledgling entity relying heavily on philanthropy in its first few months of existence. AAP’s current subscribers have only committed to three-month agreements, which leaves revenues in a precarious state.

“Our biggest challenge right now is to finish the transition process, it’s to diversify our revenue so we’re ready to meet any competition head on,” said Low.

And the competition is coming, with News Corp proceeding with launching its own wire service, the NCA NewsWire. The decision is partly a means of covering the loss of AAP content, but there is little doubt News is waiting to see whether the new AAP can survive such radical transformation in the middle of a pandemic and a recession.

Cowdroy and Low were adamant that there’s only room for one newswire in the Australian media market, but they were confident AAP had the edge over the News Corp service.

“I think the problem with the NCA NewsWire is it’s pretty difficult to wholesale and retail in the same market, because your [wholesale] customers will be your [retail] competitors,” said Cowdroy.

“Plus they don’t have the image archive that we have,” said Low.

“And our core coverage is second to none. No one can compete with that.” ‘Perfection’: Can a tin man barista make a brew better than a hipster?