Ten years after the chance discovery of low-level radioactive waste on the Parkville campus, and two years into a massive clean-up, a Citizen investigation raises fresh questions about the management of the contaminated sites. By Else Kennedy. 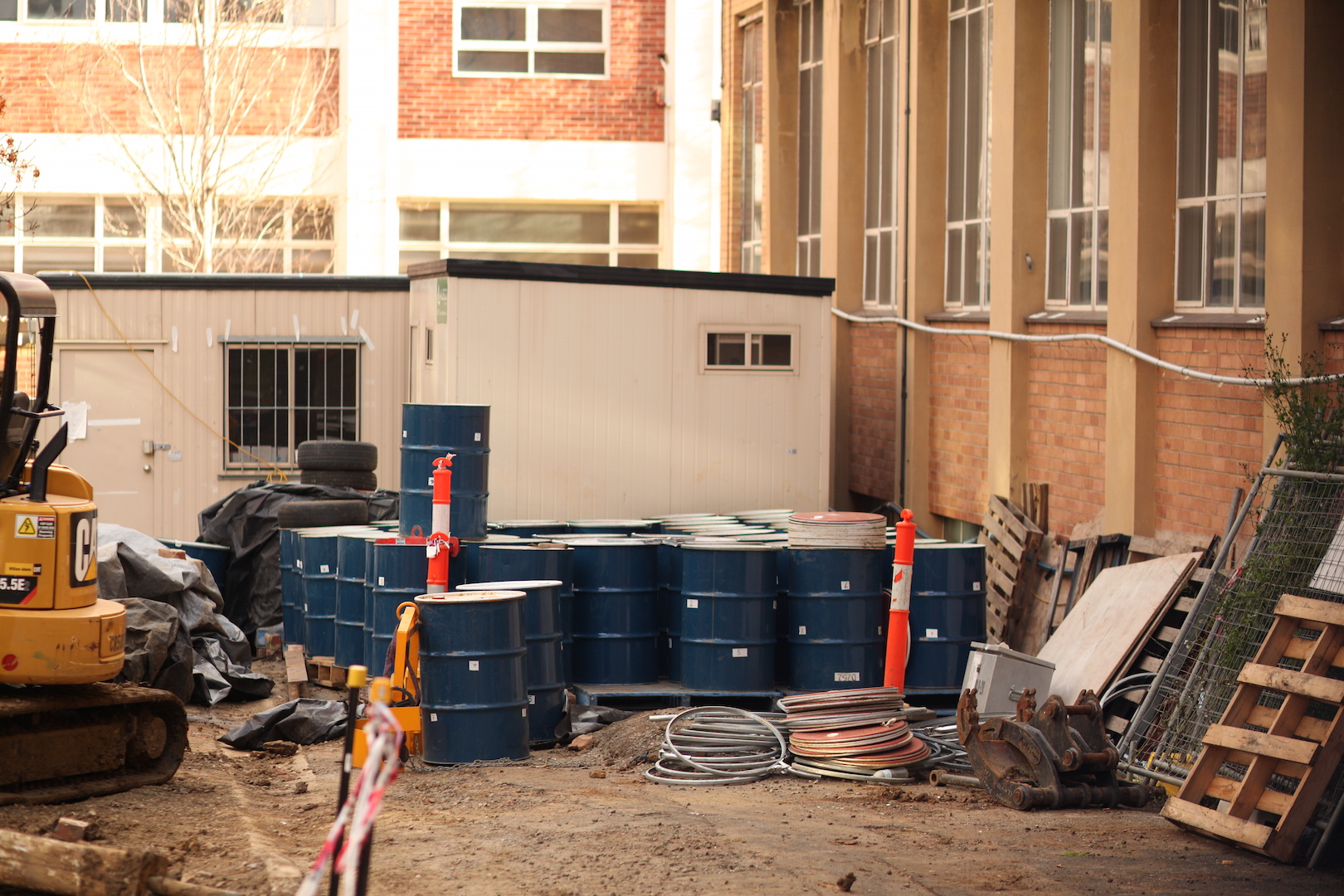 Contaminated soil in barrels at the former Building 164 site, December 2019. Photo: Else Kennedy

But with the clean-up finally nearing completion, an investigation by The Citizen has raised fresh questions about the management of the sites over decades, and about potential health concerns flowing from that.

Material presented in a safety briefing to university staff about the nature of the contamination at the time it was discovered stated the waste was “not seen as a health threat providing building fixtures are not altered or disturbed”.

But an investigation by The Citizen reveals that the building housing most of the waste had been renovated at least five times between 1981 and 2010, when the alarm was raised. One former staff member said a section of floor was removed in 2008 or 2009, and university documents show significant renovations also occurred in the building in 1981, 1982, 1983 and 1992, including the removal of a wall between the two most highly contaminated rooms on the ground floor.

“It looks as if there may have been inadequate consideration and protection, from a radiological safety point of view in the past, with this very long interval of over three decades between the university taking over the site and recognising that it warranted clean-up,” said Dr Tilman Ruff, a public health expert at the University of Melbourne, when approached by The Citizen for comment on the findings.

The contamination was discovered back in 2010 when a university employee queried the word “radium” in the history of a 90-year-old office building near Grattan Street, now known as Building 164.

An audit by the Australian Nuclear Safety and Technology Organisation (ANSTO) found radium contamination inside the building’s walls, ceilings and floors.

This sparked a university-wide search for other legacy contamination, and in 2012 radium-contaminated waste was found buried on a second site, under a gum leaf-strewn footpath leading to the Howard Florey building, a world-class neurological institute on Royal Parade.

The building where the contamination was first identified once housed the Commonwealth X-Ray and Radium Laboratory and was also known as the former Australian Radiation Laboratory. Over decades from 1935 into the 1970s the laboratory produced radium syringes and radon capsules for cancer treatment.

Over this period the laboratory was operated by the Australian Radiation Laboratory, now known as the Australian Radiation Protection and Nuclear Safety Agency (ARPANSA). The agency’s current assistant director, Stephen Long, said that producing the early radium treatments “was a fairly industrial process”, and that as a consequence “spillages occurred”.

After removing some contaminated sections of the building, ARPANSA declared the site “clean, in accordance with international standards” in 1980, in a document provided to The Citizen under Freedom of Information laws. The building was then handed over to the university.

Clean-up and demolition of the former nuclear laboratory started in 2017. Machinery on the building 164 site, December 2019. PHOTO: Else Kennedy

ARPANSA’s contribution to the clean-up was capped at $850,000, with the university picking up the remainder of the costs, totalling more than $1 million, under a Memorandum of Understanding between the two bodies.

A university spokesperson confirmed that “previously unidentifiable low-level legacy material was identified at Building 164 in 2010 and near the Florey Institute in 2012.

“On both occasions, as soon as the university became aware of the presence of the legacy material, the Department of Health and Human Services was notified,” the spokesperson said. Assessments of each of the sites “concluded that the legacy material did not, at any stage, represent a health and safety risk”.

But a Powerpoint presentation by the university’s health and safety services team to staff and students using Building 164 in 2010 added the caveat that this was the case if the building fixtures were “not altered or disturbed”.

According to Tilman Ruff, whose public health advocacy on the elimination of nuclear weapons was recognised with the 2017 Nobel Peace Prize, disturbing parts of the building through renovations “could have exacerbated the hazard”. For radium, “the main radiation emitted is in the form of alpha particles.

“Those are basically big, heavy, highly damaging particles but they travel only very short distances,” he said. “It’s mainly a hazard when they’re inhaled or ingested.

Responding to the university’s assurances around safety, he said he did not think that went far enough.

“It’s important for the university not to just say that it is safe but to prove it with data to staff and students and the public,” Ruff said.

“I think saying it’s safe begs the question of: by what criteria, on what basis, and by whose judgment? It would be better to back that up with more information, to be transparent and accountable and earn confidence by being open.”

Emma Prime, former manager of the Polymer Research Centre, worked on the most highly contaminated floor of Building 164 and was pregnant in 2010 when the contamination was discovered.

“I was given the option to move if I wanted to,” Prime said. “At the time I wasn’t concerned enough to move, though in retrospect wonder if I should have.”

Occupants were given notice to leave Building 164 in 2011 and the building was closed in 2012. Despite occupying some of the most prime real estate in inner Melbourne, the building remained closed for five years, until demolition and clean-up began in 2017.

After demolition commenced, another surprise discovery was made. Mercury contamination was found in the soil beneath Building 164, a source told The Citizen. The old laboratory had used mercury to separate radium, but mercury contamination had not been tested for.

Mercury is considered by the World Health Organisation to be one of the top ten chemicals of major public health concern. Exposure to even small amounts of mercury can “cause serious health problems” and “may have toxic effects on the nervous, digestive and immune systems, and on lungs, kidneys, skin and eyes,” according to the WHO.

The university declined to confirm or deny the presence of mercury contamination at the site.

Ruff said he welcomed the fact that the contamination was recognised and cleaned up.

But, he said, “it begs the question of why it took [the university] so long”. The contaminated remains of Building 164, totalling 35 cubic metres of radioactive waste, were trucked from the University of Melbourne campus in sealed barrels to Yallambie, in Melbourne’s north, the headquarters of the Australian Radiation Protection and Nuclear Safety Agency (ARPANSA).

The facility sits 20km north of the city’s CBD, and a short walk away from surrounding suburban backyards. The barrels are secured inside two brightly-lit, temperature controlled rooms which The Citizen was invited to tour.

“If it’s well stored, this will be okay like this for the next 50 to 100 years,” said the agency’s assistant director, Stephen Long.

That said, this facility was never envisaged as a long-term solution for what has turned out to be a long-haul problem. The Yallambie site is one of four temporary Commonwealth storage facilities across Australia which between them stockpile a total of 4,577 cubic metres of low to medium level radioactive waste, most of it generated through nuclear medicine.

The ongoing use of this suburban facility illustrates the failure of successive Australian governments to establish a permanent national disposal site for radioactive waste, more than half a century after radium began to be routinely used for the treatment of cancer.

On 1 February this year, the Federal Government announced this situation would finally be resolved, identifying a site for a permanent storage facility for low-level nuclear waste on a farming property in Kimba, on South Australia’s Eyre Peninsula. Federal Resources Minister Matt Canavan said that the site was suitable and had broad community support, although there is now a last-ditch effort by opponents and representatives of the traditional owners, the Barngarla people, to stop it.

Radium has a half-life of 1600 years. It needs to be kept safely out of human contact for more than a millennium, said University of Melbourne public health expert, and longtime nuclear weapons activist, Professor Tilman Ruff.

“In the short term, if it’s well managed, it’s probably much better off (in Yallambie) than just about anywhere else that it could be in Melbourne,” said Ruff.

“On the other hand, this is a longer term issue, because that material is pretty long lived and that hazard is not going to diminish over time. In the long term, it’s probably not an ideal place to store hazardous materials.”

Stephen Long emphasised that the material from the Parkville campus was low-level. “In terms of radioactivity, this is less than one per cent of the total activity of the waste we’ve got” Long said.

ARPANSA’s store, which also holds intermediate-level waste, is one of the largest stores of radioactive waste in Victoria, just 20km north of Melbourne’s CBD.

Neighbouring residents in Yallambie and Viewbank, and the local Banyule Council, received no notification when shipments of waste from Melbourne University arrived in 2018.

Because the facility is on Commonwealth land, and radioactive waste storage facilities are not subject to the same community consent requirements as a permanent disposal site would be, there was no requirement to tell residents.

When information about the waste transfer got out, some residents became concerned. One resident living only streets away from the facility told The Citizen they were worried what would happen if there was a terrorist attack, or a bushfire.

Tilman Ruff said telling residents about the waste stored at Yallambie was basic information that people should have access to in order to “make informed decisions about where they live”.