Climate change is messing with the timing of your favourite tipple, and upping costs for winemakers and growers. Early ripening, vintage compression and smoke taint are among the challenges. Jack Banister reports. 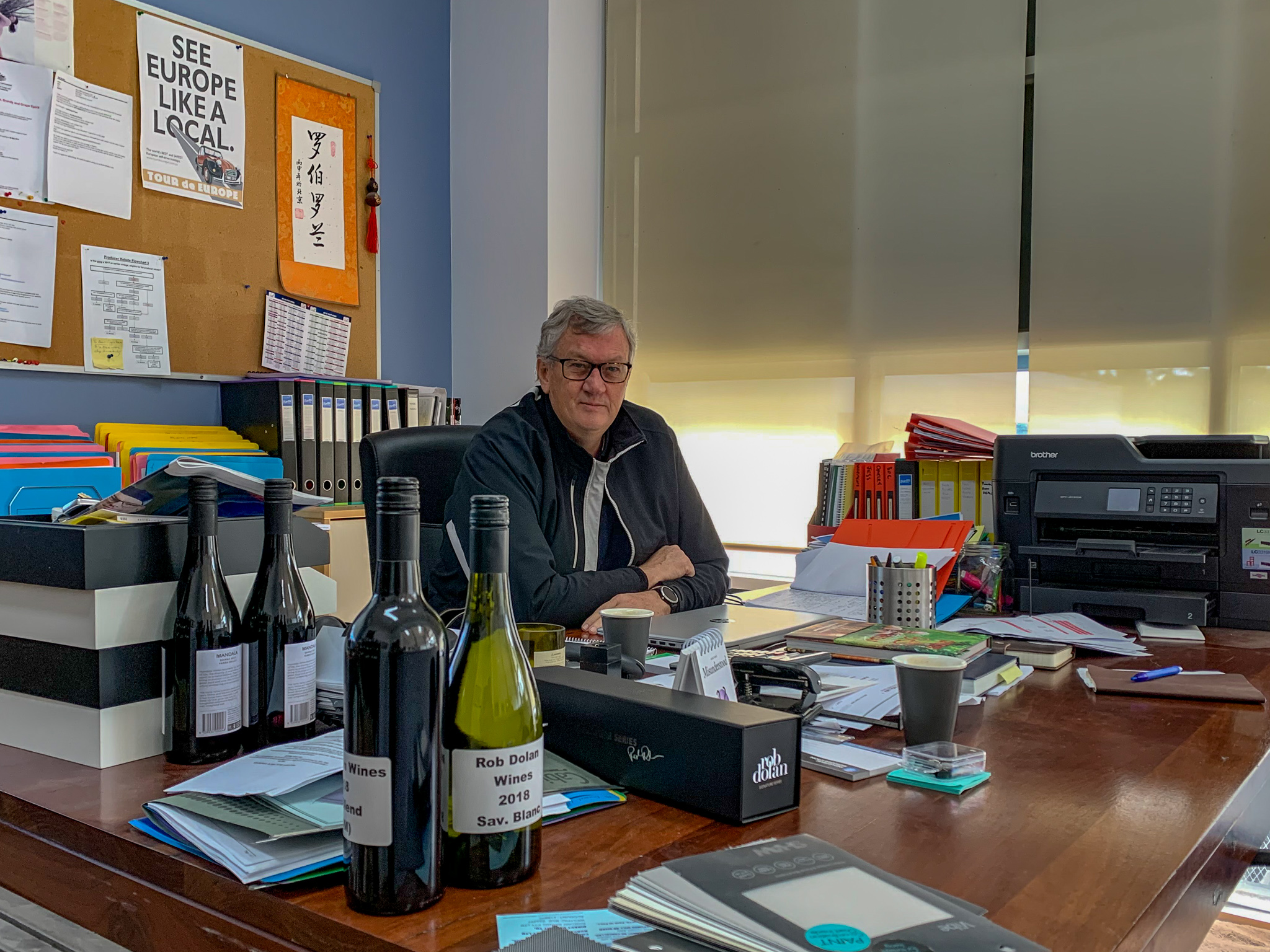 When winemaker Rob Dolan first arrived in the Yarra Valley in 1992, grape picking began in mid-March. This year, picking for his wines began on February 18. Vintage – the annual event which sets the industry calendar – had shifted back 27 days.

“It’s about a one day per year difference,” Dolan says. “It’s crazy. What you’re seeing is ridiculous … it’s in by 27 days.”

The trend is set to continue, according to renowned Australian viticulturist Dr Richard Smart. He says the wine industry is the “canary in the coal mine” and the “early warning system” when it comes to climate change.

Dolan’s start in the valley, nearly thirty years ago, was as the senior winemaker at Yarra Ridge Winery. In 2011 he bought what was previously Hardy’s Yarra Burn Winery and launched the Rob Dolan range of wines. He buys all of his grapes, rather than growing them himself. Behind the cluttered desk in his office at the Warrandyte property, he pores over the graphs which show how climate change has changed the growing season.

“You want your peak picking and ripening to be basically in March and April, for us in this area,” he said. In warmer areas, they’ll pick in late January, or February.”

Dolan’s estimate — that vintage is beginning a day earlier each year — is backed up by data from major agricultural and viticultural researchers. In 2018, Dr Chelsea Jarvis, an agricultural climate research fellow at the University of Southern Queensland, published her PhD, which focused on climate drivers and their impacts on grape varieties (also called cultivars) across Australia. She found that picking was moving forward by a mean of 0.8 days per year. “You’re getting more photosynthesis earlier in the season, so you have more rapid growth during the main part of the growing season,” she says.

The extra heat means that which grapes are grown, and where, is changing. The Yarra Valley is traditionally known for its chardonnay and pinot noir, but Dolan says his best wine in the past five years has been cabernet sauvignon.

“Historically, with the cool vintages in the ‘90s, it was almost too cool for cabernet,” he says. “Now, it’s not, and that’s what you’re seeing across the country.”

“I wouldn’t say anything is like on the verge of not being able to be grown there anymore,” she says. “I think we’re still a couple of decades out from that.”

“As the Yarra gets warmer, then probably the pinots in Tassie will taste more like the way that pinots in the Yarra used to taste.”

Some companies, including well-known brand Brown Brothers, are already preparing for long-term warming. It purchased land and established vineyards in Tasmania in 2010. Then-chief executive Ross Brown said at the time that the company wanted to “position ourselves to combat global warming.”

Shifting to a cooler climate isn’t an option for medium-sized players like Dolan. He has focused instead on upgrading the capacity of his winery to maintain his output in the face of another major challenge: vintage compression.

In his office, Dolan has another graph showing the timing and total crush of his vintages from 2013 and 2019. In 2017, a cool vintage, all his fruit was picked and processed in eight weeks.

But in 2016, a warm vintage, the overwhelming majority of the picking and processing for his wines was done in an unusually short four-week period, from late February into March.

Compressed vintages are more common because of climate change, which means winemakers risk having years where their production is significantly affected if they don’t upgrade equipment and hire more staff to do the work in the shortened window.

According to Dr Christopher Davies, a senior research scientist at the CSIRO, vintage compression occurs because “some cultivars are more susceptible [to hotter temperatures] than others.”

“It’s affecting the later varieties [cabernet, for example] and dragging them back towards the early varieties [like chardonnay], so the gap between earlier and later is much smaller,” he says.

According to Dr Jarvis, vintage compression is a bigger issue for growers and winemakers dealing with a number of varieties, so one option for managing the change would be to focus on just a couple.

Dolan processes more than five varieties, so to maintain his current range of products, he chose to upgrade storage and processing capacity.

“That means you’ve got to spend more fucking money, basically,” he says.

Power is more expensive than ever come vintage time, because of increased demand, so he has added solar panels to the roof of his winery and plans to add battery packs. The cost of upgrading made him fear at one point for the viability of his business. Rob Dolan with his range of wines. Photo: Jack Banister

There might soon be a more cost-effective fix. Dr Davies is leading research into possible solutions to issues including vintage compression, under an agreement between the CSIRO and Wine Australia. That agreement is set to run until 2022.

One initiative is the development of a spray that can slow down the ripening process of  grapes, which Dr Davies hopes will be commercially available within five years.

The idea is to manipulate the levels of a plant growth regulating molecule, called auxin.

“If there’s auxin there, it’ll delay ripening,” Dr Davies explains. “The spray adds auxin to the grape to delay ripening, which delays the harvest time. It’s absorbed into the berry, [then] metabolised away.”

That would allow growers with lots of grapes to stagger their harvest. Dr Davies claims there are no unintended side effects, except for a slight upping of the pepperiness in shiraz. That’s not a major problem, he says, because Australian shiraz is known for its peppery punch.

Even if the spray works, the wine industry remains susceptible to other threats posed by climate change to all agricultural businesses, including bushfires and drought.

Dolan lost a whole year of fruit from a vineyard he owned in 2009, because all the grapes were tainted by smoke from the Black Saturday bushfires. That’s why he now buys all his grapes.

“When you get smoke in the air, it actually can permeate in through the leaf … you have to reject the fruit, or you can bring it in, but you get this awful rancid sort of smoke tasting character which makes a wine undrinkable,” he says.

Smoke taint could be an issue in the Hunter Valley and other regions in NSW because of catastrophic bushfires burning through November and December.

Richard Thornton, the CEO of the Bushfire and Natural Hazards research centre, wrote for The Conversation in September that “climate change alone doesn’t create a bad fire season, but can make the weather conditions conducive to very large and destructive fires”.

Then there’s drought. The Yarra Valley is one of the few wine regions in Australia not currently affected, says Dolan. Dams in the region are full.

“We’ve been really lucky, but that’s not the same across the hill,” he says. “Go up to northern Victoria and some of those areas. They’re very dry.”

Dr Jarvis says drought is a major threat. “The biggest limitation [for winemaking] is going to be access to water, at least in Australia,” she says.

Recent data from the Bureau of Meteorology indicates that all of Australia’s major wine regions are going to be hotter than usual, and drier than usual, throughout December and January, which means the industry is on high alert ahead of the upcoming 2020 vintage.

While the challenge is big, Dr Jarvis is confident the industry can continue to adapt and change over the next 50 years.

“There are lots of things that we can do in the next 50 years to make sure that the quality wine production continues,” she says. Claire worries about her baby's future. “She’s not going to have the same carefree childhood I was able to have." Photo: Fia Walsh

Pregnant pause as women ponder life on an unfriendly planet

Words and pictures by Fia Walsh