Diseased and driven out of vanishing habitat, how much more can our koalas bear? 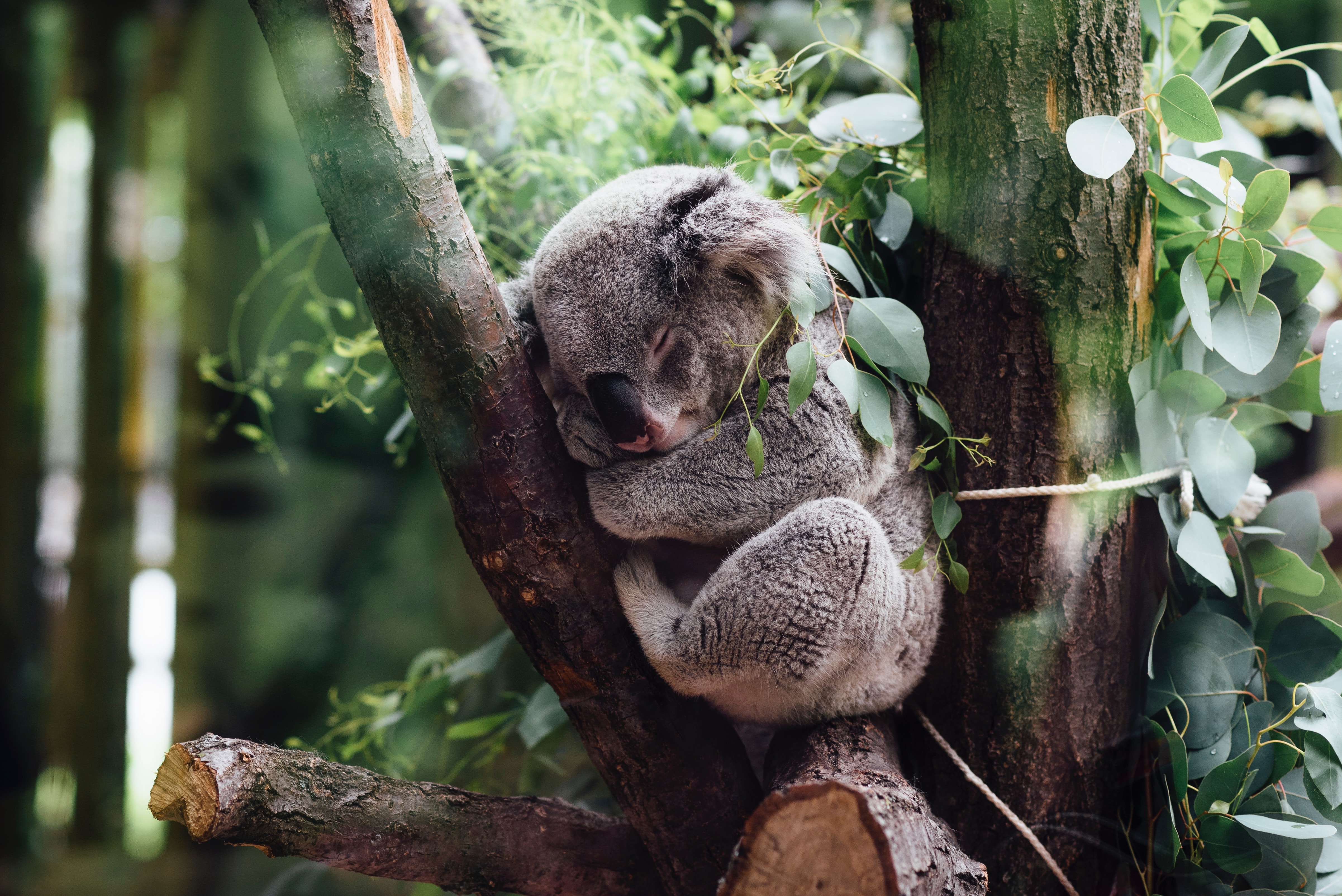 Eighty per cent of the koala’s natural habitat has been destroyed, according to the AKF Koala Map, while 20 per cent remains largely on private land, and therefore vulnerable to clearing for farming or development. Image: Jordan Whitt/Unsplash

It’s a rainy Wednesday lunchtime on Phillip Island, a couple of hours drive south of Melbourne. At the Koala Conservation Centre, a solitary plastic poncho-clad tourist gazes at one of the soggy fluffballs, huddled in the crook of a gumtree. If the words “is this it?” could be conjured into a facial expression, this man is wearing it.

The scene isn’t dismal just because of the rain. The prognosis for these koalas, all introduced to the island, is “not looking great” admits Phillip Island Nature Parks ranger Daniel Kallstrom. All but two of the island’s ageing population of 20 have tested positive for chlamydia, the sexually transmitted viral infection so widespread in the koala community that even the British tabloids mentioned it when Meghan Markle had a close encounter at Taronga Zoo last year.

By now, chlamydia has rendered most koalas at the Phillip Island centre infertile.

A joey, still in the pouch, was born about four months ago. It was the first in five years, but the celebrations are tentative. “We’re sort of holding our breath now,” Kallstrom says. The last joey “disappeared” at around the same age. There was a powerful owl hanging around at the time. “We thought it might have become lunch.”

The problems facing the koalas on Phillip Island – a community nurtured partly as a conservation project, and partly as a tourist drawcard – reflect the challenges facing koala populations across Australia. 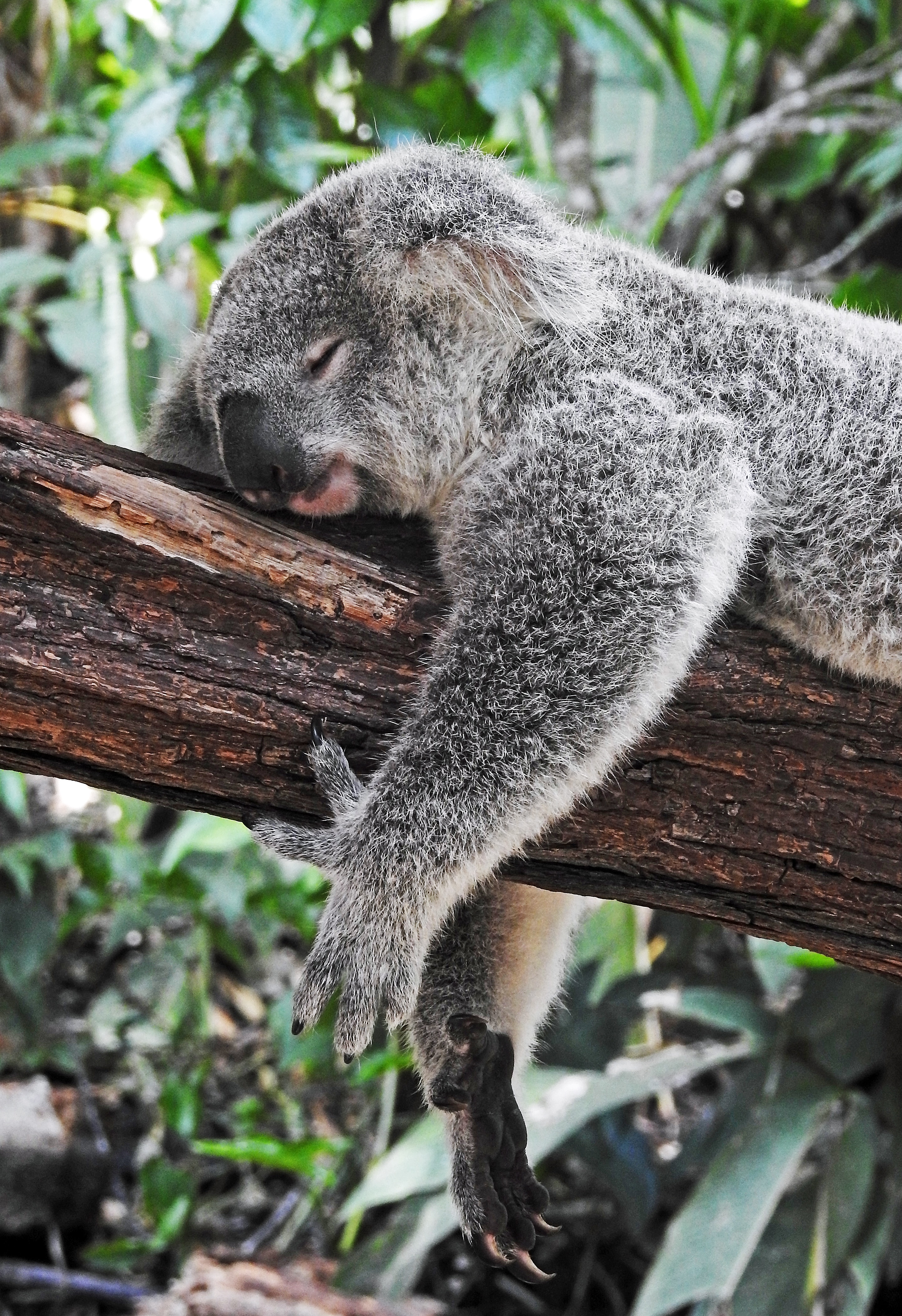 In May, the Australian Koala Foundation (AKF) stirred international headlines when it issued a press release saying there are less than 80,000 left in the wild across Australia, which would make the species “functionally extinct”. While the call was disputed by some experts, the urgent concern underlying it was not. Experts agree that the koala is in peril, and that threatened koala habitats augur badly for less charismatic wildlife.

Expert discussion around the controversial AKF’s population numbers hangs on the fact that they are markedly lower than previous estimates.

In 2016, an expert panel of 15 scientists analysed four bioregions across Australia to determine national koala population size. They estimated a range between 144,000 and 601,000, with an expected loss of 24 per cent over the next three generations.

The AKF’s dramatically smaller estimate was drawn from its own vast database of habitat information. The foundation’s research is philanthropically funded and not connected to universities or government departments. “Our database is so large that most universities won’t believe us,” CEO Deborah Tabart says, but she stands by the accuracy of the figures.

It is almost impossible to physically count koalas, Tabart says. The research relies on measuring habitats and trees across local government areas, collected through numerous studies over 24 years.

“We’ve looked at what we believe are carrying capacities for ranked vegetation,” Tabart explains. “Our maps go, ‘this is primary habitat’, like a five-star restaurant, then there’s secondary A, secondary B, and others.” The primary habitat was then collated across the county, and the density of koalas living there assessed.

Tabart, who has over 30 years’ experience in koala conservation, says koalas rely on varied tree species as food sources. They’re browsers, she explains.

“A healthy koala population needs, like, a roast meat, potatoes, pumpkins, peas, peaches and ice cream and a dinner mint.”

In habitats where there is more than one tree species present, Tabart says the AKF has found koala populations are consistently stronger and healthier. But these locations are becoming scarce.

Eighty per cent of the koala’s natural habitat has been destroyed, according to the AKF Koala Map, while 20 per cent remains largely on private land, and therefore vulnerable to clearing for farming or development.

Dr Christine Adams-Hosking, a research fellow at the University of Queensland and a member of the 2016 expert panel, says that while “the prognosis is not good”, the headline-grabbing “functional extinction” label does not apply uniformly across Australia – at least, not yet. 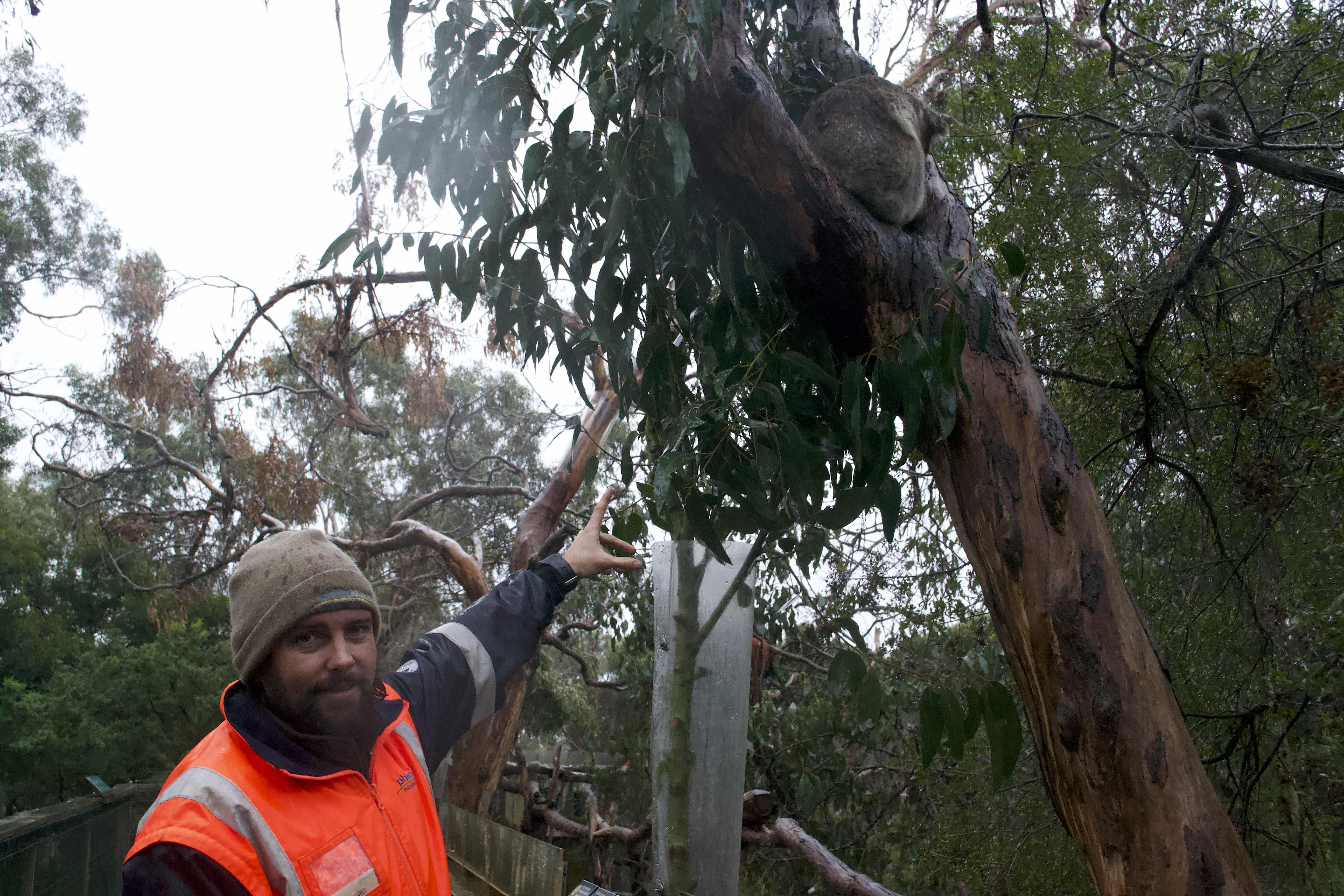 “Functional extinction” means that there are no longer sufficient numbers for the species to breed future generations. Where species are highly concentrated, it can also mean that the species has become genetically compromised due to inbreeding.

Adams-Hosking says there are areas, particularly in Queensland, where koalas are functionally extinct, but there are also areas where they are doing well.

“Some of them are definitely heading that way, without a doubt. But you can’t give that a broad brush statement for all of the koalas. You know, they’re still hanging in there,” she says.

But even where koalas are physically abundant, like in Victoria’s Otway Ranges, that’s no indication of the overall health of the population. “You’ll see six koalas sitting in a tree on the side of the road, that’s actually really an unhealthy sight, because they shouldn’t be that many koalas concentrated in a small area and concentrated on one tree.”

The pressures on koala habitats are growing, with development and farming competing for space. Even on Phillip Island, with a uniquely successful nature park program to maintain bushland, the land is criss-crossed with 80km per hour roads, growing towns, farmland, and a population that swells four times during holiday seasons.

All of it spells danger for koalas.

Phillip island was once a key part of a repopulation program to build numbers up after fur traders shot koalas to the brink of extinction in the late 19th century.

Back in the 1880s, wild koalas were transported both here and to nearby French Island to breed up populations that were then translocated back to the mainland, a practice which continued into the 1990s, with around 10,000 koalas migrated over the years. Parks Victoria’s koala management plan still describes it as one of the most successful conversation initiatives in the state’s history.

But the island’s koala community has dwindled noticeably in recent memory. Kallstrom, who grew up on Phillip Island, recalls there being high numbers of wild koalas throughout the 1990s. On the morning The Citizen visited, one was killed on the road. A few busy summers on the popular tourist island could significantly cut the remaining population, Kallstrom says.

Current legislation is not up to the job of protecting vanishing koala habitats across the nation, according to Adams-Hosking. The koala is listed as vulnerable in Queensland, New South Wales, and the Australian Capital Territory, but this recognition provides little protection from habitat destruction due to loopholes in the law, and a lack of enforcement.

ABC News reported just this week that the Federal Government had breached its own laws by approving housing developments in critical koala habitat west of Brisbane.

“The idea is that those animals should be receiving the highest level of protection,” Adams-Hosking says, “But it’s just not happening. It’s just flawed, and it’s not working.”

The AKF is pushing for a Koala Protection Act, an overarching national framework along the lines of the legislation the United States of America has put in place to protect its national icon, the Bald Eagle.

“A Koala Protection Act would say ‘you have to do your business without killing koalas … you have to find a way of moving around [habitats],’” Tabart says.

Such a national framework is at odds with the way site-specific management works in different states, says Dr Kath Handasyde, a research biologist at the University of Melbourne who has worked in koala management across Victoria.

The koala is not listed as a vulnerable species in Victoria, because the management challenges include not only too few koalas in some places, but too many in others.

Hundreds of starving koalas were culled at Cape Otway in a secret management sweep in 2015. Two koalas, Johanna and Ottie, were translocated to the Koala Conservation Centre on Phillip Island, surviving the cull. They are now the only two that do not have chlamydia.

Breeding koalas are no longer translocated back to the mainland, in an effort to manage populations in some of the dangerously high-density locations. The focus is now on habitat conservation, according to Handasyde. Contraception programs have also been instituted, so that koalas don’t destroy their own habitats by eating all of it (called “over-browsing”).

“We are spending a lot of our management dollars actually managing them down so that they don’t kill the trees,” Handasyde says.

Hotter temperatures due to climate change add pressure to the already fragmented conservation picture, and koalas are particularly sensitive to the extremes. 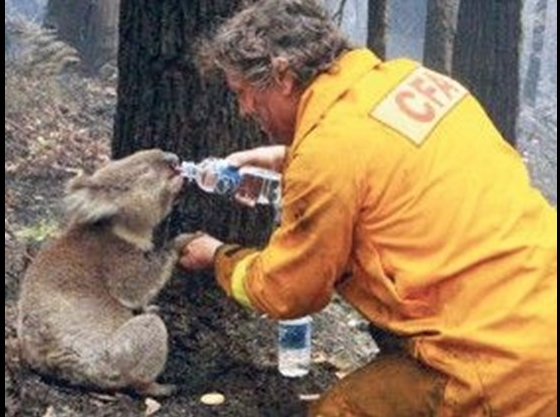 A Victorian CFA firefighter giving water to a koala during a back-burning operation in the aftermath of the 2009 Black Saturday bushfires. The koala later died of chlamydia. Image: YouTube

“Koalas can’t take shelter in a hollow on a very hot day,” says Handasyde. She points to heatwaves in the week before the Black Saturday fires when high numbers of ringtail possums and flying foxes died.

“Koalas didn’t die en masse [like the ringtail possum and flying fox] but they were really struggling,” she says. Bushfires also threaten to destroy the number of viable habitats.

Handasyde says a state-based koala protection plan could work, but points out that koalas are already one of the luckier animals in terms of funding because of their undeniable cuteness. Less charismatic creatures that are similarly imperilled by habitat loss don’t get the same attention.

“We’ve got species that we could be doing a lot about, and then we’ve got this incredibly emotive, iconic species that gets a lot more funding,” she says.

It’s now well recognised across the international scientific literature that the Earth is today in the grip of a sixth mass-extinction event, and that this is due to human activity. The value of charismatic species like the polar bear and the koala is in attracting a relatively high level of public interest and conservation funding, which can then be harnessed to assist other species.

For Adams-Hosking, koalas are “an indicator species of what’s going on with a decline in bio-diversity in Australia and world wide”.

She says that protections for key species needs to go beyond business-as-usual. “It’s almost a massive paradigm shift, a philosophical shift that’s needed about valuing nature for nature sake.”

On Phillip Island, it’s clear that the icon can live on even when the species itself is struggling. Groups of tourists tramp happily through a fully-stocked koala giftshop on the way to the rain-soaked reserve. Koala fans can buy koala biscuits, koala shopping bags, and even a Hello Kitty in a koala costume. On this dreary day, some of the liveliest koalas in the place are on keyrings.

A renovation is to be unveiled this year, but talks about the centre’s long-term future are ongoing.

In decades to come, the only koalas left here may be the stuffed variety. Nationally, the picture does not look much better. 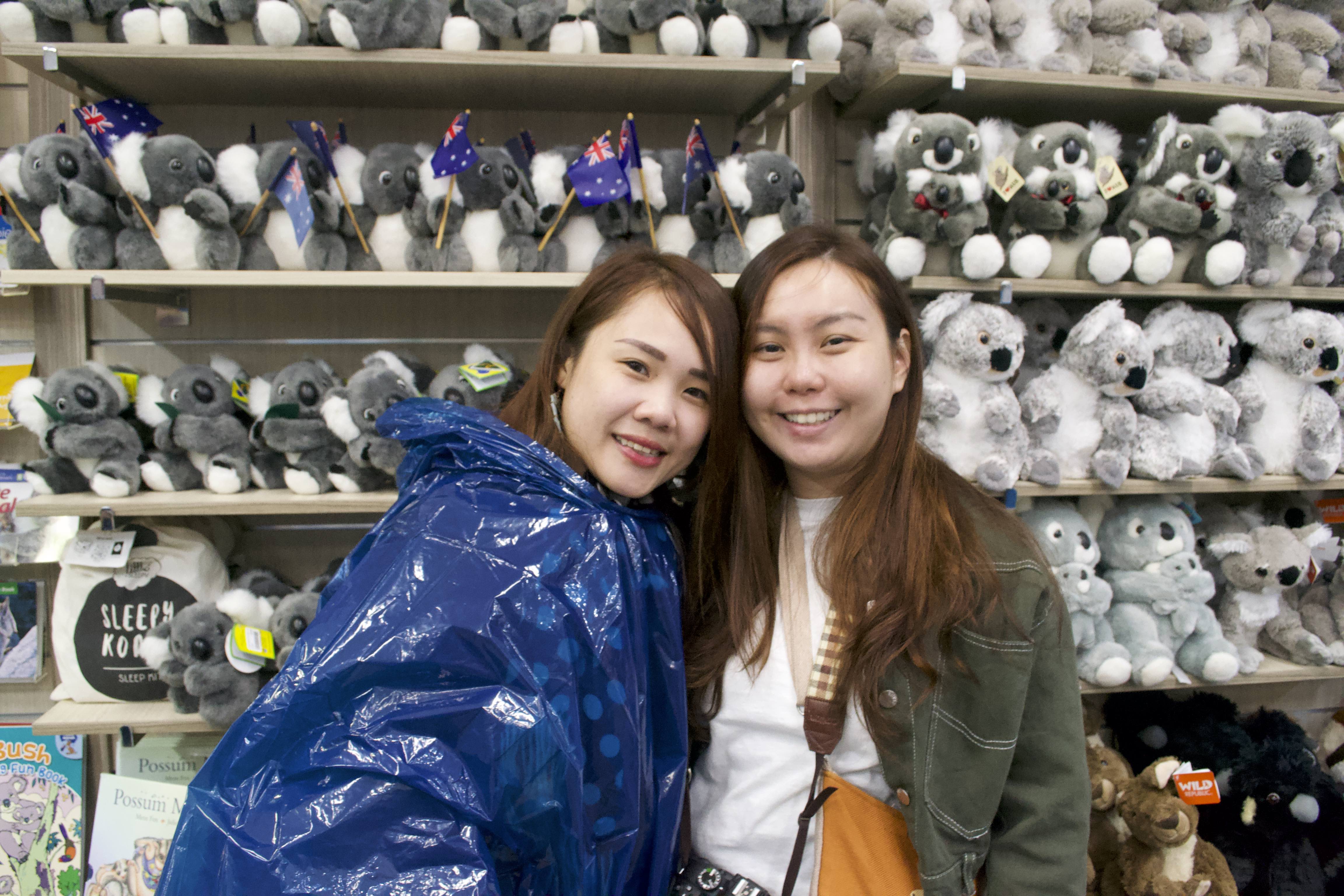 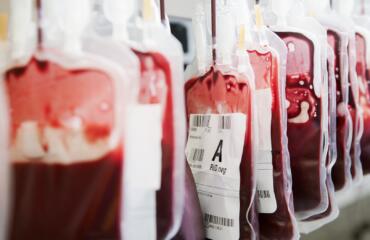 Audio documentary by The Citizen Team