The determination of one man, and the creativity of another, helped spark a metamorphosis of Lower Kororoit Creek. To view this and other stories in our multi-media series ‘The Creeks of Melbourne’, click here.

Geoffrey Ricardo’s sculptures on the Kororoit Creek Trail, a 15- minute drive from Melbourne’s CBD, are the culmination of 20 year effort to transform what was once a wasteland.

“I was more nervous than proud, if anything,” Ricardo says, looking at two of the models of the sculpture collection he created for the G J Hosken Reserve in Altona North.

Ricardo is the artist behind the Spirits of Time and Place collection that reflects the transformation story of the Kororoit Creek in the western suburbs of Melbourne. “Actually, when I started I made 16 models and I went crazy,” he says. “It was my biggest project and commission; I did get a bit carried away proposing eight sculptures.”

After nationwide submissions in 2017, Hobsons Bay City Council commissioned Ricardo’s work with the funding predominantly coming from Toyota Australia as part of its legacy to the City of Hobsons Bay, with an additional contribution from the Victorian Government, Melbourne Water and the local council.

The project aimed to provide community and recreation space. Once an abandoned, forgotten and polluted waterway, Lower Kororoit Creek is now one of Melbourne’s most attractive weekend escapes.

Ricardo defines his artworks as something between “phantasmagoria” and “the spiritual”. “I picked probably the eight weirdest ones; the ones which are the strangest that, I thought, might upset the people the most. I put them aside,” he says.

Ricardo has lived just a few minutes distant from the creek for the past 17 years. He has witnessed the changes over that time, and each sculpture he chose for the trail tells this story. “I focused on the ones which seemed a lot more literal reference to the area.

“A bit kinder in terms of the people looking at the work; a bit more accessible maybe, if that’s probably the word … knowing that they have got the appeal to broad spectrum of people,” Ricardo says.

“I moved into this area in 2001; there were areas where some of the creek had been planted, but a lot of it was still very messy. Walking along the creek was a bit of an interesting experience.”

Ricardo has witnessed the successful revegetation and the conservation efforts that have reclaimed the creek. In particular, he recalls the vision of Geoff Mitchelmore, the president of Friends of Lower Kororoit Creek (FOLKC). “We started with a grant of $1500”: Kororoit Creek’s longtime champion, Geoff Mitchelmore

We arrange to meet Mitchelmore on the creek. He gets out of his ute and walks along the pathway, pointing out the sculptures, “a whole lot of people from all around Melbourne come down to see the artwork”.

The G J Hosken Reserve and its parks are impressive. Yet just a handful of dedicated individuals – no more than 40 – the FOLKC group, transformed it.

Mitchelmore says their goal is to return the creek to a “natural state” and to make it a usable space. “We started with a grant of $1500,” he says. The initial funding came from Parks Victoria and Hobsons Bay City Council.

At about the same time, Melbourne Water – the government body that manages all Melbourne 8500 kilometres of waterways – also set goals to transform the rivers of Melbourne.

During the late 1800s, nearby abattoirs regularly poured blood into the creeks, and similar practices continued in some locations right up until the 1980s.

Then there is the leaching of waste left behind from other industries.  In 1950s, the creek was in a bad way due to the leaching of contaminants from the soil, derived from the ICI Explosives Manufacturing Plant in Deer Park, into the water. This continues today.

Gerard Morel, Melbourne Water’s Waterways and Land Officer (Werribee Catchment), has been working closely with FOLKC since it began. To some extent, Morel says, “no matter how much we do, we can’t overcome the fact that there is polluted water.

The funding from Melbourne Water subsequently assisted FOLKC greatly and Mitchelmore is thankful. “Melbourne Water has awarded about $200,000 in grants to FOLKC for these purposes since 2007,” he says.

Meanwhile, Morel gives credit to the volunteers: “What they [FOLKC] do is fantastic, the transformation is clear.”

To view a detailed photographic timeline of the restoration, click here.

Momentum grew. “Toyota gave us $1.8 million, the Hobsons Bay City Council put in $1 million and the State Government put in $650,000,” Mitchelmore says. “We built this park plus the artwork you are seeing.” In total, the funding reached $3.5 million last year and is still growing.

Everyone is welcome to join FOLKC’s tree planting events, which are posted on Facebook and community notice boards, gaining momentum, and providing inspiration.

“A lot of things they have done have taught me how to better organise works at Melbourne Water,” Morel says.

Kororoit Creek has a catchment area of 190 square kilometres. Before the 1800s, the area surrounding Kororoit Creek consisted mostly of basalt plains grassland, covered with endemic grasses and wildflowers.

The creek is one of the most important waterways in the west of Melbourne and a vital environmental corridor. In early settlement days the rivers and creeks in and around Melbourne were typically labelled as drains. The communities tended to use waterways as an easy disposal of all varieties of unwanted materials.

The eye-catching sculptures were launched alongside a milestone of work achieved by the FOLKC. The other developments include a concrete footpath – ‘Toyota Way’ – that has been created to improve access and to bring cyclists to the trails.

Some 11,000 saplings and shrubs have been planted as part of the ‘Greening the West’ project, along with the installation of Ricardo’s sculptures.

“Over the space of about 15 years, you can see [that] along the creek now there are thousands and thousands of trees to grow up and green this area,” Ricardo says, with a satisfied smile. 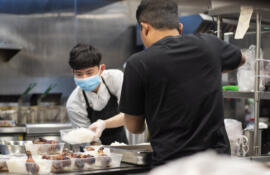 In Melbourne’s winter of lockdown, a warm meal made all the difference 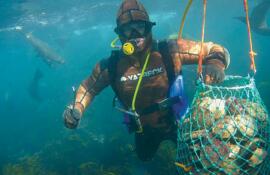