In the ongoing hiatus of music events, there’s a lot to miss – dancing, hanging out with friends, meeting new people, being transported by magical musicians. Inside Melbourne’s electronic scene, a solution of sorts has been found for the hardcore and the wired-up to get together without leaving home. Peter Quattrocelli reports. 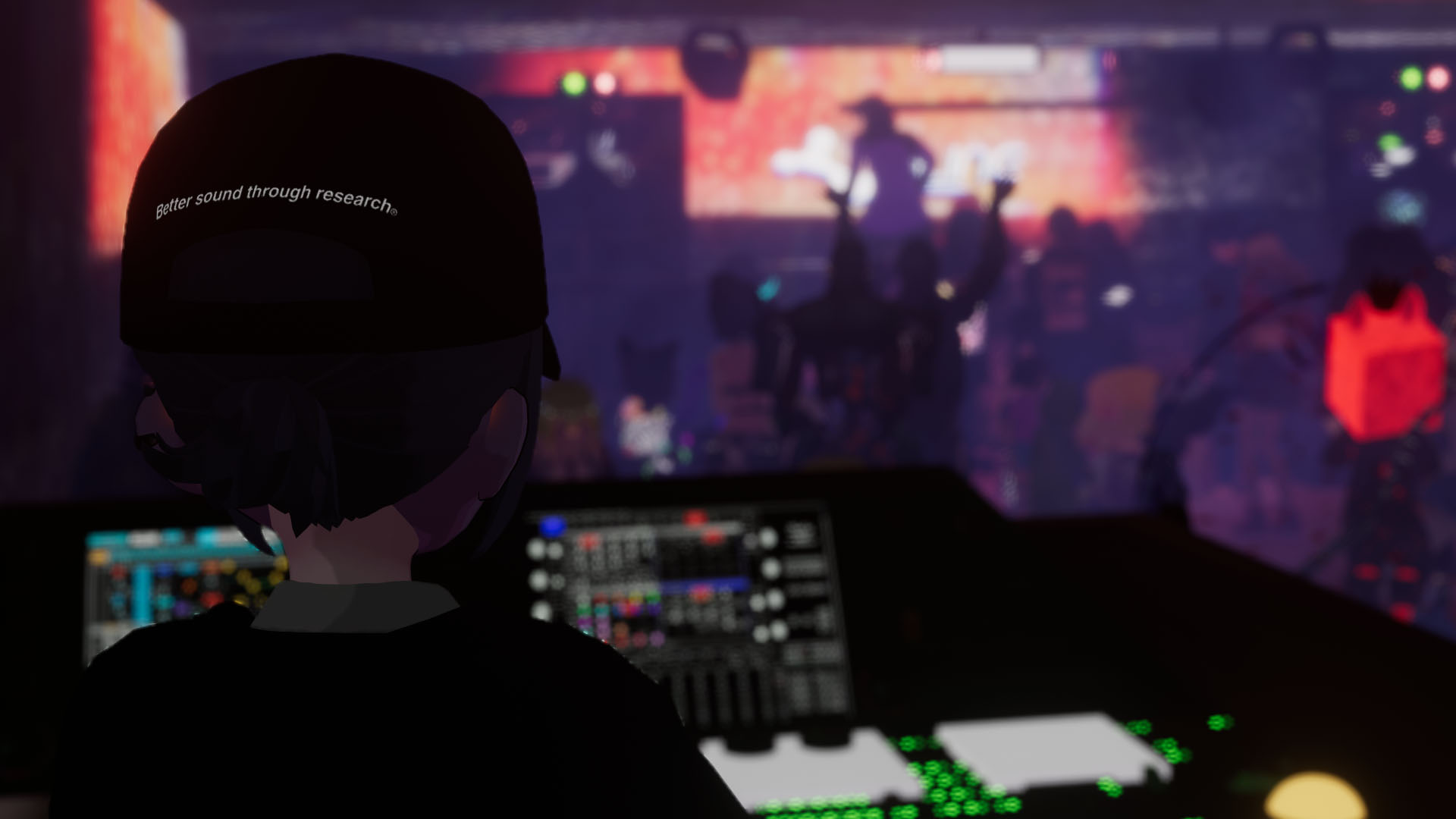 Lincoln Donelan, who performs under the moniker Velatix and is a co-founder of the music events crew Loner, has been helping to run virtual raves in VRChat's animated world for over a year. Here, his animated character is surveying the dance floor of a virtual rave from behind the DJ booth. Image Credit: Supplied

On the eve of Melbourne’s fourth lockdown, a collective feeling of disappointment descended upon the city as the dreaded “postponed” announcements flooded inboxes and social media, but one crew of Melbourne DJs managed to keep their gig scheduled.

Their dancefloor was filled with over 100 music lovers, but without breaking any of the five rules for leaving the house, and not at Richmond’s Corner Hotel as planned.

Punters were instead dancing alone in their homes, but virtually dancing next to one another in an animated game world, painstakingly customised by designers into a virtual rave.

Enabled by computer hardware and virtual reality (VR) headsets, the virtual rave was run by Loner, a crew of local musicians and DJs. It was just one of the many regular events that have spawned in VRChat, a massive multiplayer online virtual reality game launched in 2014.

As the electronic music scene is universally battered by constant COVID-19 lockdowns, this virtual world has become an antidote for those pining to return to the dance floor.

“I think what’s happening in VR right now is kind of the next big thing,” says Lincoln Donelan, co-founder of Loner. “People are slowly seeing now that there’s actual content for VR.”

In June, the VRChat team announced a Series D investment round that secured $80 million USD in funding. The team and investors recognised the rave scene, including Loner, for its ability to “set and raise the bar repeatedly” on the platform.

The animated world is not photo-realistic, but it strives to emulate what you’d expect to see at a club blearing electronic music.

“It’s like a dark, underground, kind of shitty looking place, but it’s where you’ll meet cool people. People you’ll want to become friends with and dance together,” Donelan says.

In this lo-fi, dingy rave scene, escapees from lockdown reality can even score virtual party drugs.

“We have pills in the bathroom, you can click on and it makes your vision blurry and changes the colours.”

Individuals in VRChat are represented by custom avatars and it’s not uncommon to find yourself on a dancefloor in a world filled with characters inspired by anime TV shows and gaming culture.

Since Loner started throwing virtual raves over a year ago, the collective boasts nearly 1,200 users in their discord server, an online messaging platform used to create the community that eagerly awaits details on how they can join in the next party.

The most popular events reach capacity instantly, with events held in VRChat at this stage limited to around 200 users.

Additional guests wait until a spot opens up, providing an air of exclusivity similar to waiting in line at a club until it’s your turn for security to wave you through.

Donelan says part of the inspiration for creating Loner was from the mediocre experiences he and his friends had at offline virtual events during lockdowns.

“They were over-the-top and tacky. Even though you were in VR, you were still just sitting there watching something happen, there was no interaction,” he says.

Chris Hornyak, a video-essayist living in New Jersey and creator of YouTube video The Virtual Underground: An Introduction to VRChat’s Rave Scene — which has amassed over 18,000 views since May — described his first rave as “unlike anything” he had experienced.

One particular event left him so immersed it momentarily blurred the line that exists between the real and virtual worlds.

“I remember standing in the middle of the room, really feeling the music, then looking to both sides of me and seeing people that were dancing,”  says Hornyak.

“Someone’s arm swung out to the side in front of me and I backed up a little. My brain fully thinking that I was in this space completely. It was like the headset was completely gone.”

In most cases, individuals take control of their avatar through a virtual reality headset along with two hand controllers that allow for positional tracking, but the level of immersion varies depending on hardware.

As a gamer, Hornyak has access to a powerful PC with a high-end virtual reality headset hooked up, the Valve Index.  He also has a set of body tracking devices he can attach to his arms and legs that allows him to map his full movement to his online avatar.

For those after a less immersive experience but still want to participate, VRChat can be accessed via a PC desktop without a virtual reality headset.

“There are people that are considered to be long-time members of the community that don’t have VR that just have desktop and I do think that’s what makes it special,” Hornyak says.

“I do think we’re, we’re witnessing the birth of something that is in its infancy right now and I can only imagine what it’s going to be like in five to ten years down the line.” 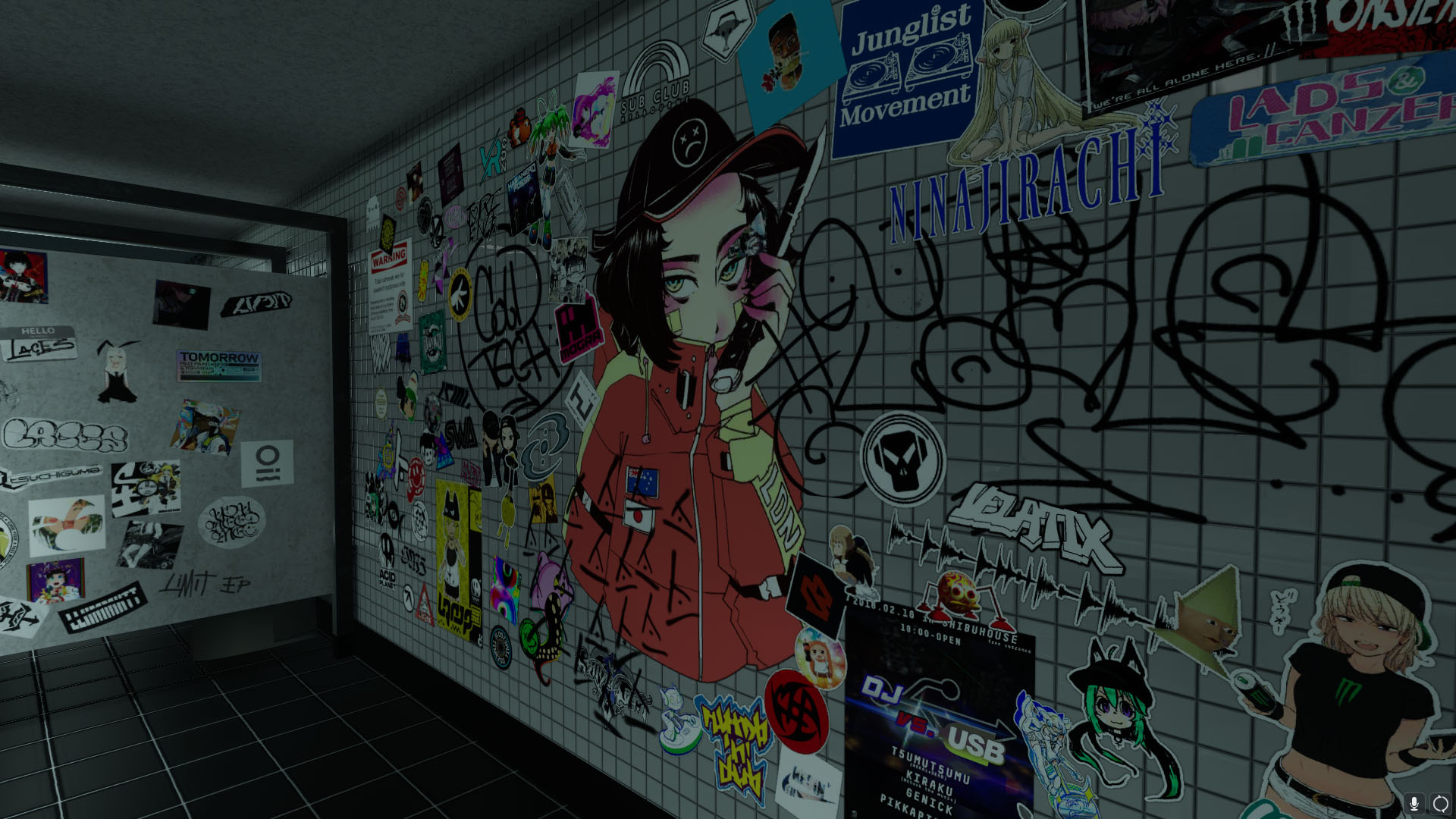 Australia’s largest music festival, Splendour in the Grass, held an “extended reality” version of its 2021 event in July. It allowed ticketholders to roam a digital replica of the festival in VR.

The longstanding cultural event Burning Man in the US will hold a “Virtual Burn” this year. It gives users a chance to “dive in, connect with Burners around the world … and participate in playfully immersive performances and conversations”.

Jacob Grant, a Newcastle-based musician and DJ who performs under the moniker Just A Gent, has had his music played at three different Loner events in VR. He says what’s alluring about the VRChat events is they draw a great crowd you can interact with.

But he is unsure about whether music festivals trialling virtual events will be able to emulate this drawcard.

“I think it’s pretty crazy but I don’t know if it will compare to the VRChat events when it comes to interacting with the other people in the world.”

While Donelan doesn’t believe Loner’s online parties will replace the real thing, he encourages everyone to try it out.

This story was co-published with Beat Magazine.