One hundred years on, a small band of enthusiasts and history buffs are recapturing the Anzac spirit for a new generation, reports Kate Stanton. “A young country needs a story.” Re-imagining the Great War for a new generation. PIC: AGWA

THEY form two neat lines under the fluorescent lights of the hall at the Oakleigh-Carnegie RSL, ignoring the discordant scraping of plates from the adjacent kitchen and muffled chatter from the dining room. In a corner, a small plaque reads: “Lest we forget.”

“Come to attention and answer ‘Sir’ when your name is called. Names excluding rank,” he says. “Davidson.”

Rodney Davidson, a 48-year-old theatre orderly from Shepparton, has forgotten his uniform. His blue jeans and black work boots stand out from the olive jackets and breeches worn by the rest of his platoon. He had to borrow someone else’s webbing – a tidy collection of utility pouches crisscrossing his back – and an original Enfield .303 rifle, now at his side. A family of four emerges from the restaurant to watch the drill. Slouch hats are strewn across tables with cell phones and half-eaten parmas.

There’s no such thing as time travel, sceptics say. But on a recent Thursday night, a dozen men bridged the century-long gap between the present and the First World War.

Howell and Davidson are members of the Australian Great War Association (AGWA), a handful of history buffs and hobbyists who dedicate their free time and money to invoking the stories and traditions of the Anzacs.

Renewed interest in Anzac commemoration, thanks to $140 million in funding for the Federal Government’s Anzac Centenary Program, has meant that AGWA members are busier than ever.

Clad in the military garb of their ancestors and armed with an impressive knowledge of the war, AGWA members give voice to history. They’re representatives from the past,  called on to take part in ceremonies and re-enactments.

August typified the demand for their shtick in this busy centenary year. On the fifth, they gathered to commemorate the firing of the first shot of the British Empire in WWI at Fort Nepean.

“We’re trying to use the medium of living history to convey to the public, including school children, somewhat what it was like to be a soldier at the time.” — part-time army reservist David Howell

On August 17, they boarded a steam train at a Melbourne event re-enacting the departure of the first Victorian Anzacs from Flinders Street Station, where they waved cheerfully to the crowd as if they were actually going to war. Two members attended a memorial service at a church in St Kilda on August 24, when they carried the 14th Battalion flag as stand-ins for the reverend-turned-soldier who never came home.

And it has been a similar pace since: commemorative dinners and parades in September and, in October, the annual Melbourne Arms and Militaria Fair.

Andrew Nolte, a stately 29-year-old engineer from Preston, looks as if he was born to be an officer. He’s been in AGWA since he was 17 and now serves as the group’s president and lieutenant.

Mr Nolte calls Anzac re-enactment a hobby and a service. The First World War wiped out a generation of Australian men, he says. Their stories need to be told.

“People just have no real comprehension in this day and age,” Mr Nolte says. “We haven’t had to suffer something that drastic since.”

Public interest in the Anzacs is at an all-time high, he adds.

“This is something we have not seen,” he says. “Every week you’ll find something in the newspaper around the First World War, which is great.” There are about 25 AGWA members in Melbourne, including a handful of female “nurses,” and smaller chapters in NSW and the ACT.

Melbourne’s AGWA members attend a training session once a month. They meet for dinner at the RSL, then retreat to the hall to practice their platoon drills, a co-ordinated series of movements designed to demonstrate precision and discipline.

Mr Howell, a part-time army reservist who works at Melbourne’s Shrine of Remembrance, is not a real platoon sergeant, but he is fastidious about standards and demanding of his men.

“Every single man should be proud of their contribution toward the centenary,” he tells the group. “It’s about to get revved up,” he adds. “But never lose sight of our aim and our purpose.”

For Mr Howell, it is about education.

“We’re trying to use the medium of living history to convey to the public, including school children, somewhat what it was like to be a soldier at the time.”

He bristles at the term “historical re-enactment”. He likes to say “living history”, to distinguish AGWA members from American Civil War enthusiasts and battle re-enactors who scuttle across grassy fields pretending to shoot each other.

“There are other groups that just dress up in the gear and run around pretending to play soldier,” Mr Doensen says. “It’s borderline disrespectful, just the way they portray themselves, the lack of effort.”

So, what entices adult men and women to play dress up?

Most of them have a passion for history or theatre.

Marcel Gold, a 22-year-old electronic games developer, refers to himself as a “multi-period” re-enactor. He has played men from the Roman era, the 14th Century and the Second World War. Mr Nolte spends part of his week in a moustache and tuxedo as part of a 1920s jazz orchestra playing gigs in Melbourne’s inner north.

Phillip Hunting, a 25-year-old Victoria University student and aspiring thespian, speaks with musical clarity in a vaguely British accent. He wears the purple-over-blue colour patch of his great-grandfather, but has invented his own character for more informal events. He likes to put on a show.

“His name’s Pud – Puddin’ – which is sort of my nickname,” Mr Hunting says. “I like to say he’s a character, otherwise it means it’s who I am. He’s sort of a dope, sort of a fool.” Mr Hunting’s friend, Allison Barry, has come along to drill night to see if she’s interested in becoming an AGWA nurse. Ms Barry already participates in the UBCS Misfits, part of a group of cosplayers who dress up like the characters from the Resident Evil videogame.

The First World War is hardly a stretch.

As for Mr Doensen (pictured at right), what do his friends think of his hobby?

“Most of them are here,” he replies.

All of the men have relatives who fought in the war, a generation of lost and battle-scarred men, whom they honour with the distinct colour patches on their sleeves.

Kevin Armitage, a 51-year-old psychiatric nurse from Mitcham, bears the purple-and-red patch of the 38th Battalion. His grandfather, Leo Tasman Armitage, turned 18 in the trenches, but died after the war in a motorbike accident just minutes from the RSL.

Mr Armitage says he joined AGWA to “gain insight” into his grandfather’s experience.

Mr Doensen, whose great-grandfather was in the 7th Battalion, shows off his brown-and-red patch.

“Mud over blood,” he says, a traditional euphemism for the colour scheme.

In recent years, Australians, especially politicians, have shown increasing enthusiasm for the Anzac legend, the idea that Aussie soldiers were noble in defeat and good-humoured to the end. Critics prefer to call it a myth.

“There are other groups that just dress up in the gear and run around pretending to play soldier. It’s borderline disrespectful, just the way they portray themselves, the lack of effort.” — carpet layer Nick Doensen

But Mr Howell says that AGWA tries to remember the Anzacs in all their complexity. With young Australians still going to war, it’s important for people to learn about the experiences of soldiers past and present.

“A young country needs a story,” he says.

AGWA members are storytellers through action, rather than words. They’re living reminders of a generation that can no longer speak for itself.

“See his buckle?” Mr Crump asks, pointing to the shiny ornament on the private’s back.

Corporal Crump nudges it just a centimetre or two upward so that it lines neatly with the stitching of Mr Armitage’s jacket. 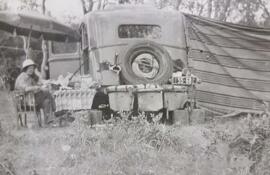