The small town of Buchan turns to crowd funding after their only pub is destroyed by fire, reports Kate Stanton. The smouldering ruin of the Buchan Caves Hotel after it was destroyed by fire in April last year.

On a Wednesday night in May, Greg Brick steels himself to address 150 of his neighbours seated under the fluorescent lights of the Buchan Football Club rooms.

They make up almost half the population of greater Buchan, an East Gippsland valley town near the mouth of the Snowy River National Park. Mr Brick is called “Bricky” by most of the people here, who know him as a local plumber and former publican of the Buchan Caves Hotel.

Mr Brick and his wife Margaret need help rebuilding Buchan’s only pub, which burned down in April last year. They say the loss of the pub has had a devastating impact on the economic and social vitality of the town, where it served up more than hot meals. The Bricks have had some offers on the land and they need the money, but they want their little town to have its pub back.

“We would love to build it ourselves, but financially we’re in no position to do so for three to four years,” Mr Brick tells them. “We know you can’t wait that long.”

He introduces Lyndel Moore, a marketing consultant and project manager who moved back to Buchan, her grandparents’ hometown, from Melbourne last October.

“I was really nervous,” Ms Moore says later. “I’ve been pitching marketing campaigns and concepts for nearly 30 years, but I don’t think I’ve ever been as nervous as I was that night.”

“People started talking about experiences they’d had in the pub, the fact that the pub was the town, in essence.” — Lyndel Moore, fundraising organiser

But she needs the community’s approval. Ms Moore offers up a distinctly modern solution. She wants to use crowdfunding to raise at least $600,000 for the construction of a new pub.

Ms Moore already has a Facebook page, titled “Let’s Build A Pub”, that is accumulating thousands of likes.

“We had a couple of naysayers in the audience,” Ms Moore says. “We had to educate them as to crowdfunding and what the outcomes could look like.”

“It was pretty raw,” she says of the meeting. “Bricky, he’s a mountain man and I don’t think those guys talk a whole lot about their feelings. There were very nearly tears in the room.

“People started talking about experiences they’d had in the pub, the fact that the pub was the town, in essence.”

It was a “yay” or “nay” vote. And when Ms Moore finally called for the “yays”, every single person raised their hand.

The buildings that make up Buchan town centre sit on either side of a road that leads through the mountains. It has all the hallmarks of a small town – a roadhouse, a general store, a café and one policeman, whose house serves as the police station.

But there’s an empty block where the pub used to be.

The Buchan Caves Hotel, an old weatherboard building with a green-roofed veranda, was named after the town’s most popular tourist attraction – an underground system of limestone caves. 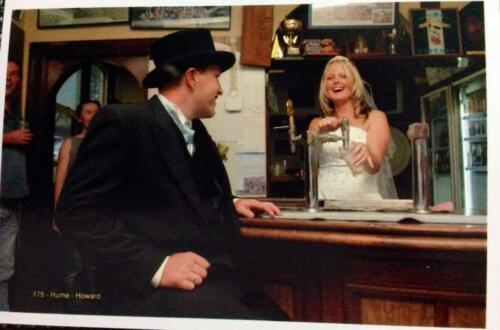 For more than 100 years, the hotel served as a watering hole for travellers, as well as locals, who relied on the pub as a multi-purpose gathering place.

They went there to celebrate the birth of a baby, to pay tribute when someone died, to talk stock prices or local news. In the old days, the pub also served as the town morgue.

“This was not just a pub,” says Ms Moore. “It serves so many needs. This is a place where this town connected.”

A bridge over Buchan River leads to Buchan Uniting Church and Buchan Lodge, a backpackers’ hostel owned by Dick Baxter, 80, who used to lead tour groups of Melbourne teenagers through the caves. Mr Baxter says the lack of a pub has deterred travellers from staying in Buchan on weekends. “It’s made a hell of a difference to my business,” Mr Baxter says. “Without any meals in town, I’m just not getting anybody on the weekends.”

Mr Baxter says people visiting the caves will take their business to other towns, where they can get a drink or an evening feed. He said this year’s Easter rodeo, an annual event, saw a noticeable drop in attendance.

“You can tell by the number of people that are just not around,” he says.

The Buchan Caves Hotel closed up for the night for the last time at 8:30 on April 8, 2014. Shortly before midnight, the whole pub was on fire.

Buchan residents, some of them in tears, stood and watched a part of their local history fall away. A light rain did nothing to stop the flames. Victoria Police says the fire is still being treated as “suspicious” and that the investigation is ongoing.

“It all fell in a big heap…we thought we were never going to get a pub again.” — Richard Baxter, owner of the Buchan Lodge

Shortly after the fire, the consortium that owned the pub drew up plans to have it rebuilt. The ambitious blueprint originally submitted to council included a microbrewery and retail section, but some of the partners and possible funders balked at the potential cost. The consortium broke up, leaving Mr Brick with the land.

“It all fell in a big heap,” Mr Baxter says. “We thought we were never going to get a pub again.”

Ms Moore says that any pub built with the crowdfunding campaign would look and feel much like the old one – without all the fancy additions proposed by the consortium. “We could never build something that was state of the art in Buchan,” she says. “That’s just not a good idea; it wouldn’t be as embraced as well as it could be.”

Mr Baxter says he had never heard of crowdfunding before Ms Moore’s campaign, but he searched online and found a video game project that raised $10 million.

“I think its got huge potential,” he says of the campaign. “It’s revitalised the town really. Everybody’s sort of thinking, ‘Wow, this could happen.’ ”

Crowdfunding seems like a 21st century technique. But the philosophy is recognisable. When your neighbours reach out, you give them a hand.

Asked what would happen if the campaign fails, Mr Baxter is almost at a loss for words.

“Well, it’s a depressing thing, really,” he says, after a long pause. “It’s just hard to describe. It makes a big difference to the fabric of a little community like this.” ► The“Let’s Build a Pub” project met its fundraising target of  $600,000 and is still accepting donations. You can visit their facebook page for updates on the building plans.