As smokers are ordered to butt out, some Victorian venues have chosen to throw out their menus rather than lose hard core clients. But it’s a doomed business. Hunter J. Thompson fronts the bar to find out why.

As a business plan, it was simple. "If we lost the smoking, we would have lost the patrons," says bartender Karl Weedon.

It’s Friday night, work is done, and the bar is abuzz with animated gas-bagging. The sun is setting, the music is pulsing, and starting a tab seems a good idea. Bowl-cuts, tattoos, and Doc Martin’s seem to be the trend. Conversations get deeper as a thick haze of cigarette smoke settles throughout.

Everyone is smoking. Everyone.

It’s been 18 months since Victoria introduced laws banning smoking in outdoor dining areas. At the time, it meant that certain restaurants had to make the choice between retaining diners or smokers. Windsor’s Tyranny of Distance was one venue that opted to cut down on dining, preferring to accommodate its smoking customers. Bartender Karl Weedon says that it was an easy decision to prioritise smoking over eating, suggesting it wouldn’t be profitable otherwise.

“If we lost the smoking, we would’ve lost the patrons,” he said.

The dominant age range at the venue seems to be the ’90s babies, however there are plenty of outliers. Tyranny is renowned as one of the only venues where patrons can still light up under cover. There’s still a small menu, but diners are relegated to a much smaller separated area inside the venue.

“With just the restaurant we would’ve failed as a business.”

Making the call was as simple  as asking the venue’s regulars their favourite characteristic about Tyranny. The responses were unanimous. “Everyone likes the fact that you can smoke in most of the areas here,” said Weedon.

“We didn’t go smoke-free because we would’ve lost all of our customers that way. We noticed that people came here for their smoke and their drink over having food or anything else.”

Sitting inside Tyranny when The Citizen drops by is Katharine Anderson. With a gin and tonic in one hand and a cigarette in the other, Anderson is forthright on why she seeks out this type of bar.

“Because I like to have a cigarette while I’m having a drink.” 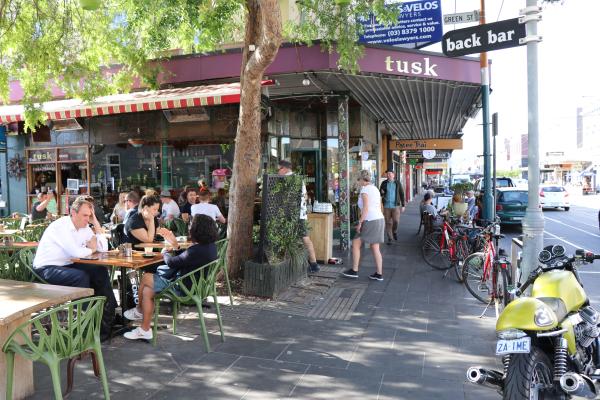 Not dissimilar in clientele, Chapel Street’s Tusk went the other way, prioritising its dining menu and restaurant. While the venue eliminated smoking in the main dining area, having a corner location made it possible to have a specialised area on the footpath for smokers.

“We had to approach the council, get a liquor license extension, and we had to pay for the footpath trading permit, which was another $1500,” said Francis Placentino, the owner of the Tusk.

“That solved the problem and it increased our seating capacity by about 16 seats.”

Enjoying a coffee in the non-smoking section of Tusk are Eleane and Maria. Both have previously quit smoking and say they are happier sitting in clean air.

“I stopped smoking two years ago, so I’m a little bit more sensitive to it,” said Eleane.

For Placentino the focus of the venue has always been on the dining, with the bar and smoking aspect secondary. The change hasn’t seen a fluctuation in profits but possibly a slight overturn in customers. “It’s been revenue neutral for us,” he said.

“I think that there are some people in the dining area that perhaps don’t come as often as they did because they’re not able to have a cigarette with their meal or after their meal.

“But at the same time there some people that did not go to the dining area because of the smoke that was around them. So, it’s a win-loss and neutral in the end.”

Before the ban came into effect on 1 August, 2017, information packs were sent out to all venues from the Victorian Department of Health to explain the new restrictions in full. After a “grace period” of three months, proprietors became liable for any breach.

Leigh Dawkins, environmental health officer for the city of Stonnington, is responsible for issuing infringement notices to food premises in that area, of which there are close to 1300. While they are working purely on a “complaints system”, he says no one has officially been penalised.

“The main issue we have is that patrons will smoke in an area that they thought they could,” said Dawkins.

“If it’s a one-off thing, we try to just deal with it. If it becomes a continual thing, that’s when we’ve been instructed to infringe.” To be compliant, smokers must be at least four metres from outdoor dining areas or separated by a wall of at least 2.1 metres. Offending patrons would be looking at a fine of $777, while a business could be anywhere up to $7773 out of pocket.

“They’ve come twice and measured that it’s compliant and then ticked it off,” said Tusk owner Placentino.

“There are some people in the area that are very vehement against smoking and have made complaints to the council thinking that the two areas were too close together.”

Obviously, a major consideration for venues choosing the smoking path was the future of the kitchen staff. As Tyranny of Distance found, the change meant having less staff on hand at any time and shorter hours for the chefs. “It definitely ate into the kitchen’s profits,” said Weedon.

“You can’t have a kitchen and a smoking venue and both of them be successful. You have to prioritise one over the other.

“They (the chefs) understood. It’s been a long, gradual process to come to a nice agreement with our kitchen.”

Maya Rivis, program officer for Alcohol and Tobacco at VicHealth, says the aim of smoking reforms are twofold, firstly as a preventative measure for people who don’t already smoke, but importantly to assist those trying to quit.

“Being in an environment where there aren’t other people smoking helps them in their quitting journey,” said Rivis.

The most recent government survey in 2016 found smoking rates in adults throughout Australia to be 13 per cent of the population, decreasing by almost half over the previous two decades. Victorians slotted in just below the average at 12 per cent. The 25 to 29-year-old age bracket recorded the highest rate amongst Australians with 18 per cent, the same demographic found in bars such as Tyranny.

Population telephone surveys are the only way of measuring smoking prevalence and trends amongst Victorians. This makes it hard to pinpoint whether these reforms have directly led to people quitting, with Rivis believing it’s always an accumulation of factors.

“It’s never one thing alone that leads to people quitting or taking up smoking,” she said.

“We do big mass media campaigns that coincide with those types of laws because when you are coming at an issue from multiple angles, you’re more likely to be successful.”

Rivis says their next goal is to get smoking banned from outdoor drinking spots altogether.  It seems inevitable that in time smoking will be obsolete from all venues. 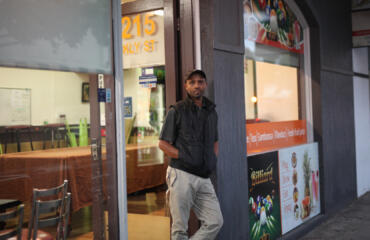