Growing up in suburban Melbourne, Filipino Australian director Matthew Victor Pastor was the butt of cruel jokes. Now his films explore the realities of children born to the wave of women who married into a new Australian reality. By Zhuo Yang. 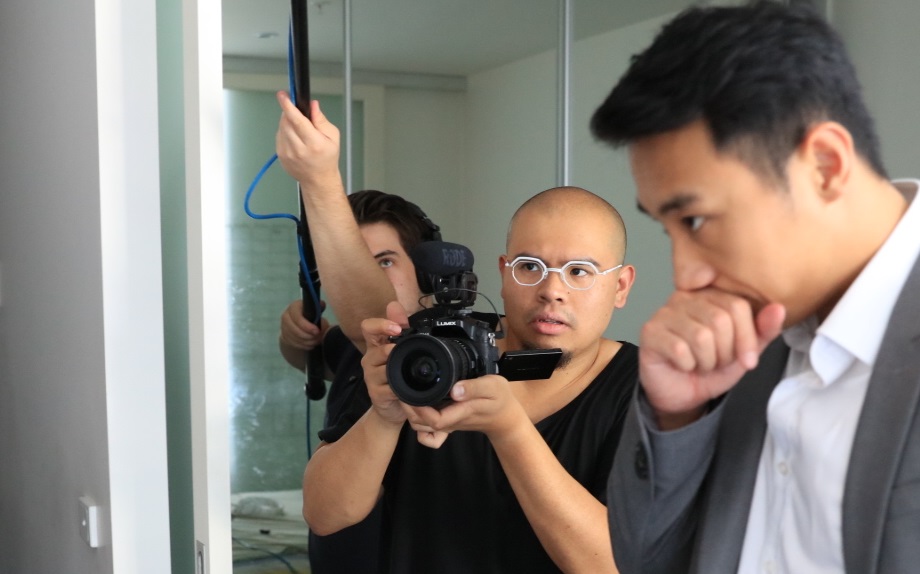 Melbourne-based Filipino-Australian director Matthew Victor Pastor: “You can pretend to be something else for your whole life, but you are what you are." Picture: Zhuo Yang

It’s ironic that an independent filmmaker known for his efforts to tackle stereotypes fits pretty much every stereotype for filmmakers.

Matthew Victor Pastor looks very much the part in his red-tinted glasses and cardinal red velvet vest, casually pecking at a sleek new laptop at an inner-city café. He is back in his hometown of Melbourne after a triumphant trip to the Sinag Maynila Film Festival in the Philippines, where his latest film, MELODRAMA/RANDOM/MELBOURNE!, took out the honours for best original score and the best musical score.

The film is the second part of Pastor’s “Fil-Aus trilogy”, with the first being I am JUPITER I am the BIGGEST PLANET (2016) and the third instalment, MAGANDA! Pinoy Boy vs. the Milk Man, now in post-production. Like the other two parts, MELODRAMA/RANDOM/MELBOURNE! is a narrative film that explores the experiences and identity of Filipino Australians.

The latest instalment consists of three interwoven storylines. The film uses nonlinear narrative to tell the story of a feminist documentarian, a pick-up artist and his 30-year-old virgin student, and an elderly Filipino woman. By showing how their lives collide on the neon-lit streets of the Melbourne CBD, Pastor tries to capture the confusion and struggle of the characters and reflect on the community as a whole.

The film is primarily focused on Filipino-Australian millennials, their struggle with cross-culture identity, racism, sexism, and self-hate. Pastor’s work is mostly fictional, but that doesn’t stop him borrowing elements from real stories he heard within the community. The 29-year-old director says his inspiration for this latest film comes from the older generation, from history.

Many Australian millennials of Filipino heritage are products of the wave of Filipino bride migration since the 1980s, including Pastor himself. His mother came to Australia in 1988 and married his Australian father, 20 years her senior and himself of Spanish and Malaysian heritage. One year later, baby Matthew was born in Dandenong, Victoria.

The objectification of Asian females and the terrible toll that has taken are issues that have long haunted Pastor. The female documentarian in the film looks at the history of the Filipino brides, then asks if young Filipino Australians today face the same objectification, sexism and racism.

His film cites statistics that 44 Filipino women have been murdered by their Australian husbands since the 1980s, and Pastor wonders how many more hidden abuses women like them have suffered, and what the legacy will be for their children. This is explored through the character of an old Filipino mother, providing an opportunity to discuss how similar experience and struggle are reproduced and passed between generations.

The female documentarian in the film looks at the history of the Filipino brides, then asks the question if young Filipino Australians face the same objectification, sexism and racism today – a question posed by the director himself.

Pastor is eager to bring this largely hidden story into the open and share it with the wider Australian audience. The exposure is long overdue, he says.

Pastor describes himself as a proud Filipino Australian, but he hasn’t always been like this. In his teen years, he used to introduce himself as “Spanish-Malaysian-Filipino”, even though Filipino makes up half of his bloodline. He felt ashamed of his Filipino heritage, partly as a consequence of the cruel jokes people would make about his mother being a Filipino bride. But he also recognises a strong culture of racism against one’s own people permeating many Asian diasporas in Australia.

He cites the example of his mother. After Pastor finally “came out” as a Filipino Australian and started introducing himself as such in interviews, his mum couldn’t understand why he would mention the Filipino part of him instead of just saying he is an Australian.

“You can pretend to be something else for your whole life, but you are what you are,” Pastor says.

The bold titles of his films are crafted to reflect his push-back against stereotypes. “I like to shout at people: ‘Look at me!’” he says. “I have the freedom to yell and shout my titles to people if I want to.” It’s a challenge to the notion held by many in the Asian community that they should be quiet, even silent, on many issues. Even though Pastor used an Asian-Australian crew, and the setting for the film is Melbourne, he didn’t submit this latest film to any Australian film festivals for screening until he came back from Manila. When asked about this, he laughs but then admits to some insecurity about how his work might be received within the Australian industry.

His films have a tone that is darker than the migrant stories usually told in Australia, he says. “I always feel that people think I am going to complain and make a big issue out of this when it’s not.”

“This is a very Australian thing. We are like ‘everything is great here, it’s perfect’.”

There’s a sort of excessive positivity and obsession with stories that reproduce good feelings among people in the Australian film industry, Pastor says, and that can be a challenge for filmmakers like himself. Confronting an audience with a nasty, discomforting truth or previously is a risky business.

Now that MELODRAMA/RANDOM/MELBOURNE! has received positive reviews, Pastor has sent it to several local film festivals. “So we’ll have to wait and see. If no one selects it, then my suspicion is right. It says a lot if no one is willing to screen it in Australia.”

MELODRAMA/RANDOM/MELBOURNE! is not yet on public release in Australia, but Pastor is hopeful it will screen at Australian film festivals soon.