Caring for loved ones with dementia at home is hugely taxing. Kirsten Moore assessed whether support services were effective.

‘ I was interested in the care of people with dementia in the advanced stages who are living at home. The government has a program (the Extended Aged Care at Home Dementia package) which is equivalent to high-level residential care or what used to be nursing home care. They first develop a care plan and then a personalised set of services for that family.

I interviewed 38 carers who were looking after their family member at home. It was fantastic meeting all these people that had such huge demands on their time. They were caring for people that required 24-hour care. They had interrupted sleep. This was their whole life.

Most people were really glad to have someone who would just listen to their problems and to their experiences, and there wasn’t an agenda to it and they could just express how they felt and have a good whinge. Sometimes, I was in people’s homes for four hours. There were lots of laughs and lots of tears and it was quite emotional. 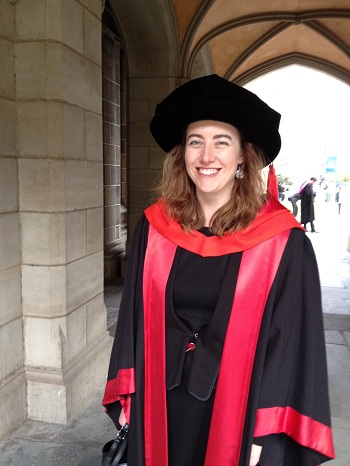 From the package they were getting about 14 hours of service, most often in-home respite, so the carer could go shopping or catch up with friends or have time to themselves.

There are definitely examples where the package was able to help but there was also the perception that 14 hours wasn’t enough. There is lots of talk about person-centred care and that’s the ideal but people were saying: “I really just want someone to vacuum the carpets”. And you think that sounds like a pretty straightforward thing to do but it wasn’t happening.

A lot of people really didn’t want to use residential care and they put incredible pressure on themselves to maintain care at home. For spouses, it was kind of signifying the end of their marriage in a way. That was quite dreadful for some. One carer’s wife went into residential care just after I interviewed him. He said he heard about a man in Sydney who was a pilot and who had taken his wife up with him and the plane crashed. And he said: “I don’t know if it was an accident, but I’ve had this thought myself.”

But then, for some people the residential placement meant that they could go back to having a more normal relationship with their parent.

There is a lot of stigma attached to dementia. Society-wide, we need to have a better understanding of dementia and the benefits of an early diagnosis. People often want to delay it, and I can understand that, but there is benefit, particularly now there is medication that can slow the progression in the early stages.

The Productivity Commission did a review of the whole aged-care system and they’re looking at changing the whole process.

I think it’s being recognised that it’s about the transparency of services. People need to know what they’re entitled to. ’

‘The media . . . relied on the assumption that secularity is inherently democratic and religion is violent’