‘It’s troubling that there is so much matter in the universe that we don’t understand.’

Andrea Ruff is an astrophysicist whose life-long love of space and the universe has been the motivation for research that has deepened understanding of quasars and the evolution of new galaxies. 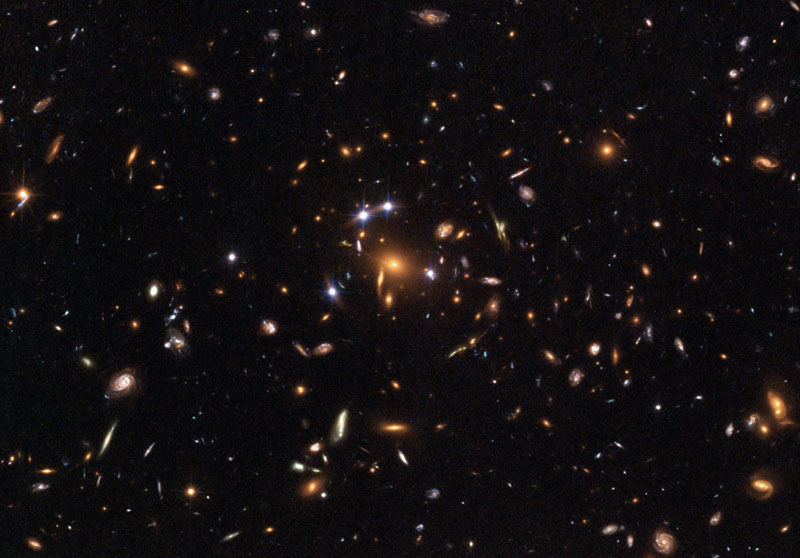 The gravity of a galaxy cluster warps and magnifies the light from a distant quasar. *Image courtesy of NASA and hubblesite.org

‘UNCOVERING the mysteries of the universe is truly fascinating. I’ve always been interested in how things work so, after studying physics, moving into the world of astrophysics was a fairly natural progression.

The universe hasn’t always existed, of course. There was a starting point. From that specific moment in time the universe has continued to expand and evolve over billions of years.

Now, using telescopes, we can peer into the earliest points of the universe, where quasars and newly-formed galaxies can be seen. These objects were the focus of my research.

Such a black hole has enormous gravitational pull. This means it can bend light, which is very useful for understanding the evolution of galaxies.

This distance makes quasars incredibly hard to understand. You can’t just take a photograph of a quasar and see what it looks like,  because from Earth it just appears as a small dot. So, in addition to taking a photograph, astrophysicists use spectral emissions – the distribution of light coming from objects – to study quasars.

Quasars emit a lot of blue light compared with other stars and galaxies. They are also incredibly luminous, producing light 100,000 times brighter than the Milky Way.

When I looked at the spectra of several quasars in my research, I saw incredibly broad emission lines. The difficulty was trying to work out what sort of gases were causing these emission lines.

By simulating a process called photoionisation – hitting gases with light – I calculated the density of the gases surrounding the quasar. It turns out the intense blue light emitted by quasars is caused by a halo of gases, including hydrogen and helium, spinning rapidly around a super-massive black hole.

In separate research, I found that the mass of a newly-formed galaxy creates enormous gravitational pull. This means the galaxy’s mass can bend light, which is very useful for understanding the evolution of galaxies.

To illustrate, imagine there is a particularly good alignment between our line of sight and two other galaxies. From our perspective, light from the farthest galaxy will be bent around the middle galaxy, causing a giant magnifying glass effect.  Astrophysicists call this effect a gravitational lens.

Using this lens, astrophysicists can see a lot more light from galaxies hidden behind the middle galaxy. They can also get information about objects that could not previously be seen. So, by using the bending of this light, we can measure the mass of the middle galaxy or, like I did, use this mass to determine the amount of dark matter within the middle galaxy.

Astrophysicists have some clues of what this might be, but more research needs to be done before we get a good understanding of what dark matter is and what role it plays in the evolution of galaxies.’

Andrea Ruff’s research is titled ‘The broad emission line region of quasars and gravitational lensing by early-type galaxies’, a study into the behaviour of gas around super-massive black holes.