Bill Welsh served in the navy in World War II, and played briefly for Collingwood in 1950, but desperately wanted to return home to Yinnar. There he met Jean at a dance one Saturday night, and the rest is history visible all over town. Jordyn Beazley continues our series on life in a Victorian country town. 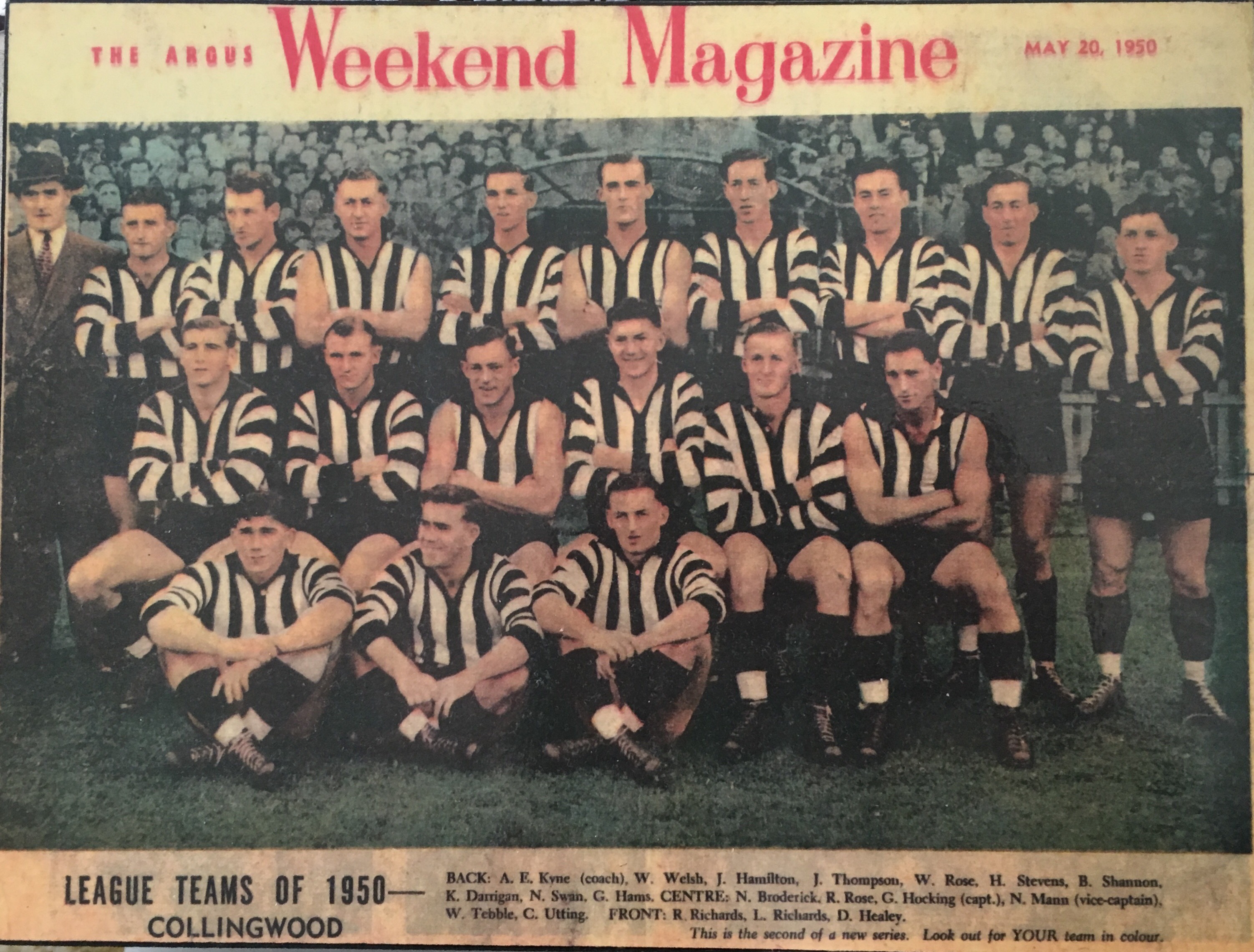 Jean Welsh looks at the 1950 Collingwood team photo sitting on the glass coffee table, taking pride of place in the centre of her loungeroom. Back row, far left, next to legendary coach Phonse Kyne is her husband at 23, pictured moments before he played against Fitzroy in his first VFL game.

Jean lifts her gaze to Bill, now 94, resting opposite her in his favourite lounge chair. She smiles as she reflects on all they’ve achieved since the photo was taken 68 years ago. “We’ve lived a very happy life here, haven’t we Bill,” she says.

Bill nods as he reaches for the cup of tea resting on his walking frame. Though he is hard of hearing nowadays, he doesn’t need Jean to speak up to know her nostalgic tone. 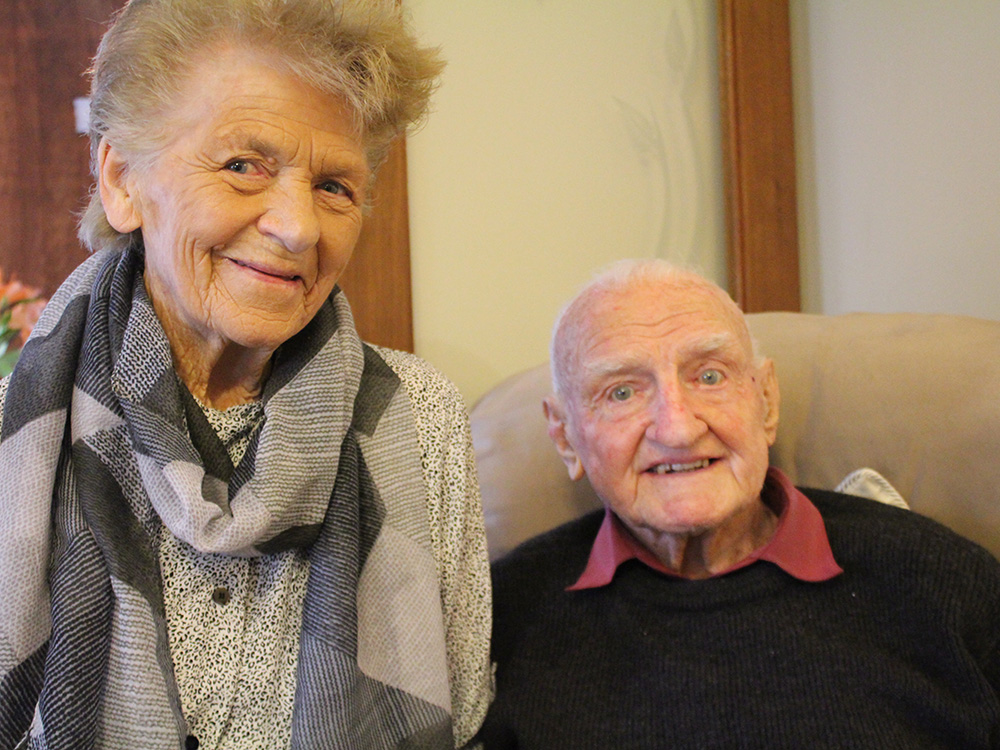 Jean and Bill Welsh met at a dance in Yinnar, which “had the best dance floor in the area, so I would come from Morwell with my friends. It always drew a big crowd,” says Jean.

Over the years, young Bill received invitations to try for Carlton, Fitzroy, Hawthorn and Essendon. But after just eight games with Collingwood, Bill left Melbourne and his burgeoning VFL career. His heart was set on something more important – giving back to his hometown of Yinnar, where he has lived since he was two.

It takes five minutes to walk from one end of Yinnar’s Main Street to the other. Hugging one side of the street are the icons of all regional Australian towns – a hardware store, bowling club, general store, primary school, RSL, war memorial, and of course, a pub.

Like most small towns, it appears humdrum to an outsider. But with the benefit of a tour through the town guided by Jean, its less visible dimensions are revealed.

Yinnar is a place that thrives on the support of one another, and reflects Bill’s mantra “if a town’s worth living in it’s worth working for”.

Strolling past the locally owned businesses with Jean, you might feel like you’ve also lived there for years. She stops to chat to most people, piecing together the conversation from when they last spoke with ease. Jean says ‘‘hello’’ to everyone, even those she doesn’t know. The lines from always smiling are etched into her skin.

Jean leads the tour to the war memorial with an ease of motion that makes you forget she is 90. The memorial is opposite the RSL at the northern end of the Main Street. It is sheltered by trees that dapple pale winter sunlight on the names of Yinnar’s people who didn’t return from the war. This is a place of pride for the Welsh family.

Bill is the last living World War II veteran in Yinnar, and one of fewer than 20,000 left in Australia. He joined the Australian Navy when he was 18 and spent three years in service, seeing action in the Pacific, New Guinea, Philippines, and Borneo on HMAS Arunta (1).

Jean crosses the road to the bowling club – an emblem of what communities can achieve when they work together. Locals raised the money to build the club in 1958, and have since managed the upkeep themselves. Jean walks through the ‘’side’’ gate, welcoming herself as if it were her second home. She points to the trees that line the back fence of the bowling green. “Bill planted those,” she says.

Bill was the foundation president, and Jean was also president for a time. She gave it up nine years ago once Bill became unwell. His health deteriorated after their son Peter passed away in 2008 from a long illness at age 54. Peter is remembered as a local football star who also made it to the VFL, playing for both Hawthorn and Richmond. 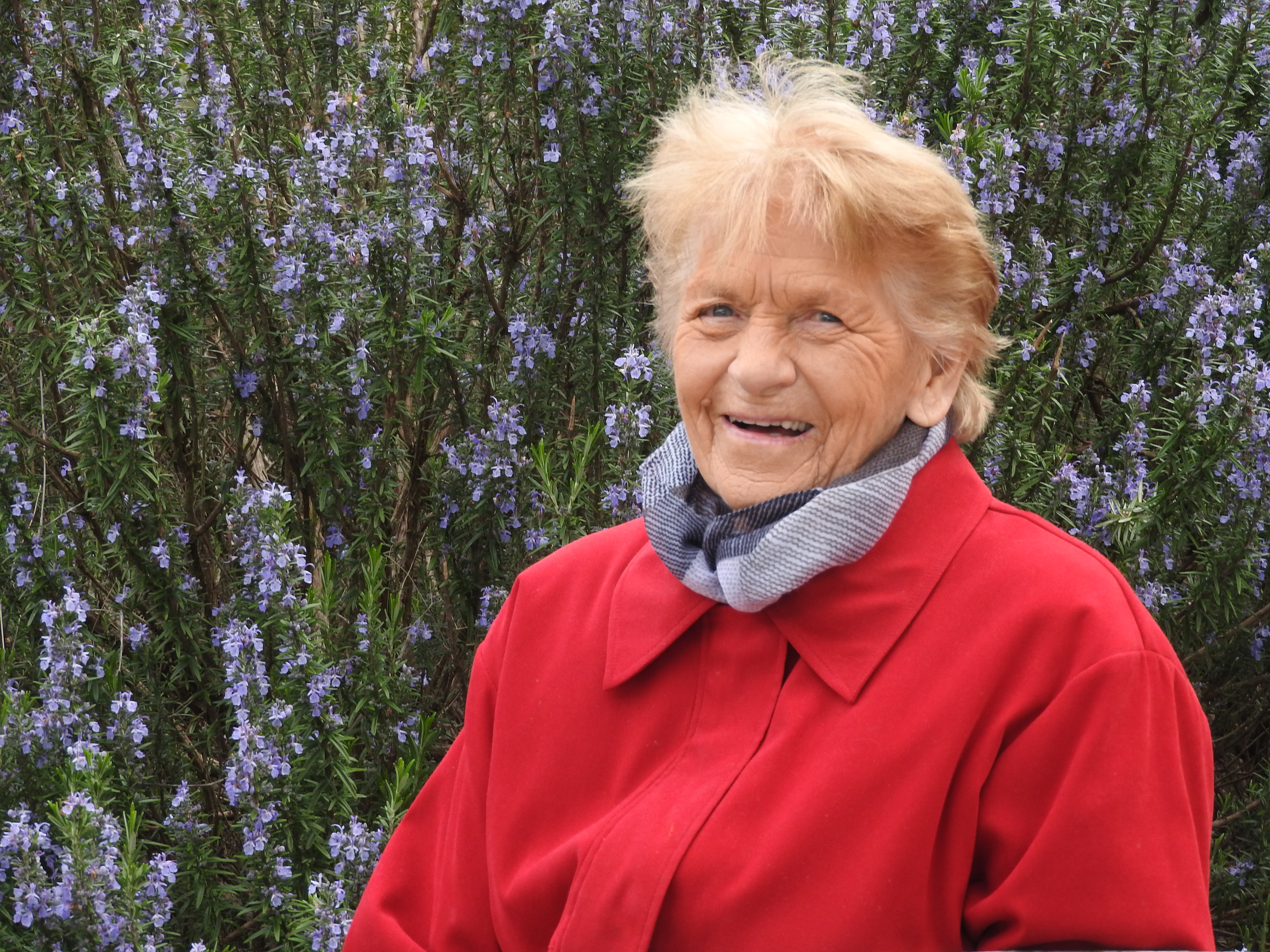 Jean Welsh in the community gardens she and Bill helped create to mark the town’s centenary in 1974: “When we wanted something, the community pulled together and made it happen, we didn’t rely on government grants.” Picture: Jordyn Beazley

Bill and Jean had two children after they married in 1951. They met at the dance that was once held in Yinnar every Saturday. “Yinnar had the best dance floor in the area, so I would come from Morwell with my friends. It always drew a big crowd,” Jean says.

“He asked me for a dance, and what a life it has been since that moment.”

There are echoes of Bill and Jean’s marriage spent in civic service the length and breadth of the town. Sitting across from Yinnar’s row of businesses is the Centenary Gardens. Jean recounts Bill’s role as president of the Centenary Committee, an event that saw the gardens built to mark Yinnar’s centenary in 1974.

The money raised from the event also went towards building the community sports hall that sits in the primary school directly across the road.

“When we wanted something, the community pulled together and made it happen, we didn’t rely on government grants” Jean says.

Strolling through the sites with Jean you can feel that Yinnar is a safe place. The type of place where you can leave your doors unlocked or have your kids play without constant supervision.

Bill spent 40 years as justice of the peace in place of a local police officer. “There is no crime in Yinnar, so we have never had a police officer. There wouldn’t be much for one to do!” Jean quips in her jovial way.

From Jean’s sprightly step, you wouldn’t have guessed she fractured her hip in November  last year. “I tripped up the back step [at home]. I had been going up and down that step for 67 years, we never thought something like that would happen,” Jean recounts.

The Department of Veterans Affairs was unable to provide emergency respite care for Bill when Jean was hospitalised and recovering. The cleaner, a service provided by the Latrobe City Council, extended her hours to support meal preparations in the mornings. Mavis, Jean’s 91-year-old cousin, would drive to the Welsh’s home from Newborough, after she finished her shift at the op shop, to care for Bill in the evenings.

Continuing the town tour, Jean points to the town clock sitting atop the railway shed that once serviced the old Morwell to Mirboo North line. The line closed in 1974. Jean recalls catching the last train to Mirboo North the day it closed. “By then most people had a car, so people just weren’t using it as much anymore,” she says.

Below the clock is a plaque that tells you the clock was donated by Bill in 2011. It could be a reminder of the time Bill spent carting stock feed to the Yinnar Farm and Hardware store, which he and his brother Alf ran for 37 years. 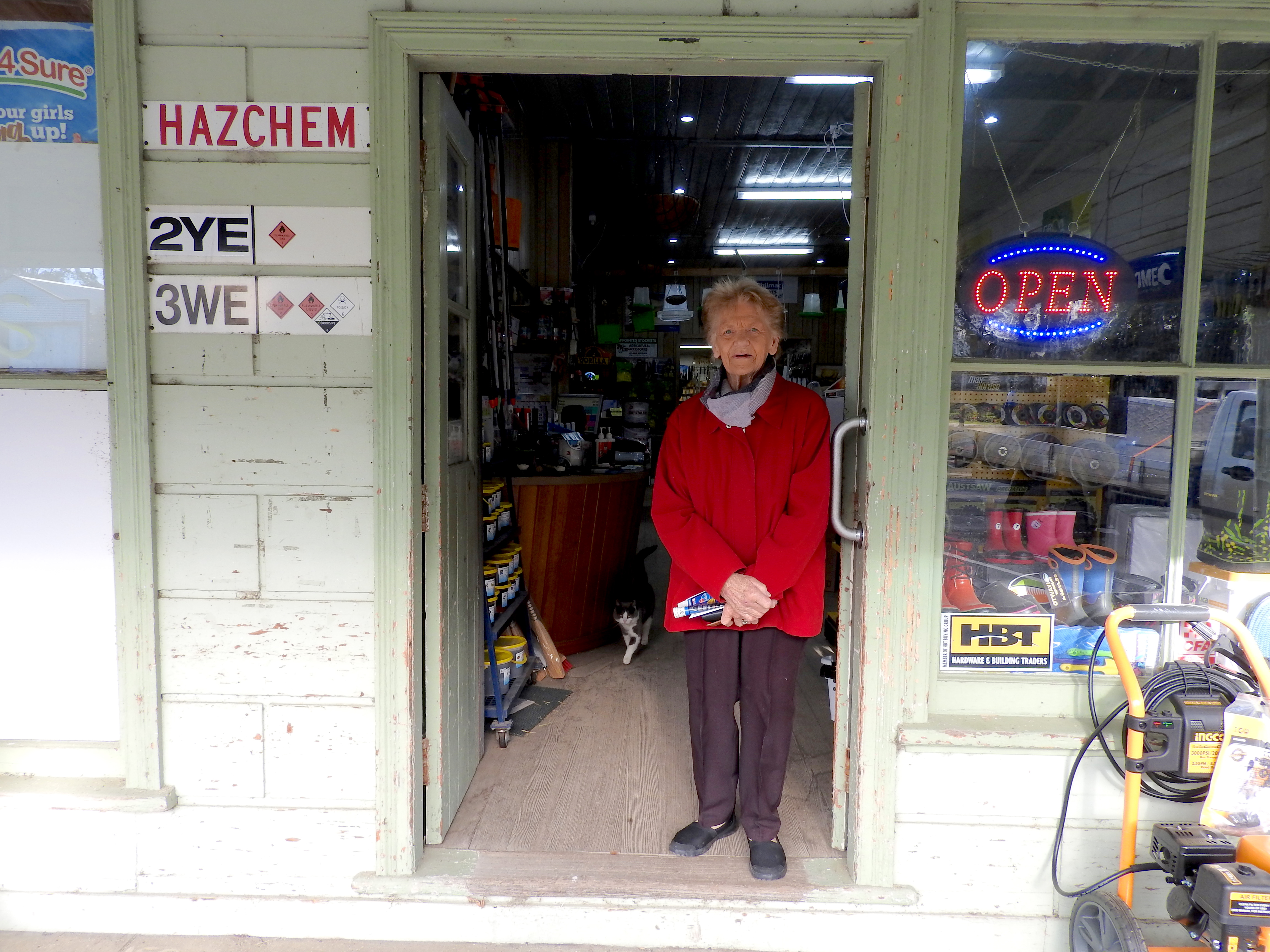 Jean enters the hardware store, which she hasn’t visited for some time, and walks with purpose to the back storeroom. Still hanging in the corner is the bike Bill rode 20 kilometres each way from Yinnar to Yallourn High school every day.

The store owner spots Jean in her crimson red jacket standing in an aisle bordered by piled stockfeed. His quizzical expression transforms to familiarity once Jean introduces herself as a Welsh. Looking up at the bike, covered in 80 years of rust, he remarks that it is an enduring emblem of Bill’s ownership of the store.

Jean returns home, excited to tell Bill the bike is still there.

Bill and Jean have lived in their home since 1951. It was once the only house at the end of Yinnar’s Main Street. Now, it stands in a row of brick homes. On the opposite side of the Welsh’s back fence is a new housing estate.

Jean remarks that the coule didn’t want Yinnar to grow. “A few of the local farmers divided their land into housing blocks. People just weren’t buying the milk, so the land wasn’t paying. What else could they do?” She says.

She worries that the burdens of modern life on residents have meant a loss of connection with the community. “[People] have much larger mortgages now, they don’t seem to have as much time to give to the community,” she says.

Jean hands Bill another cup of tea, then pulls a chair from the dining room to sit next to him. He has since moved to a different lounge chair, one that catches the afternoon sun. Bill raises the cup of tea to his lips to blow away the steam. He remarks that “there is nothing like a cup of tea to ease your day.”

Bill says many people have asked him over the years how he did it all.

“When it is a little town like this you get involved in everything, and you enjoy it.” He proudly proclaims that he is a “Yinnar person”.

Bill and Jean continue to live in their cherished home thanks to a network of support services. The Latrobe City Council supports them with a cleaner and a woman who showers Bill. Both increased their services while Jean was recovering from her fractured hip. “The local government do as much as they can. The help we get is all subsidised. We could get more help, but we like our independence,” Bill says. “If we ever get in strife, we know we can count on them to help us.”

Helen Taylor, the manager of age and disability services for La Trobe Council, says elderly people living in the shire are well supported by the Commonwealth Homes Support Program. This aids people over the age of 65 with personal care, such as Meals on Wheels and respite care, and activity groups for socially isolated people. For people living in Yinnar, the majority of the services are in Morwell. The council arranges transport for elderly people who are no longer able to drive. While Yinnar does have retirement villas, as do most regional and rural towns, it does not have a residential home. This means that those who can no longer care for themselves leave their home towns when the support they need exceeds what the council can provide to them to look after themselves.

Bill and Jean say their health is the most important thing to them as it dictates the next chapter of their life story.

“Once I get to an age where Jean can no longer be looking after me, I’ll need to go to a nursing home,” Bill says with resignation.

He doesn’t look at Jean. But she moves her hand to rest on his. 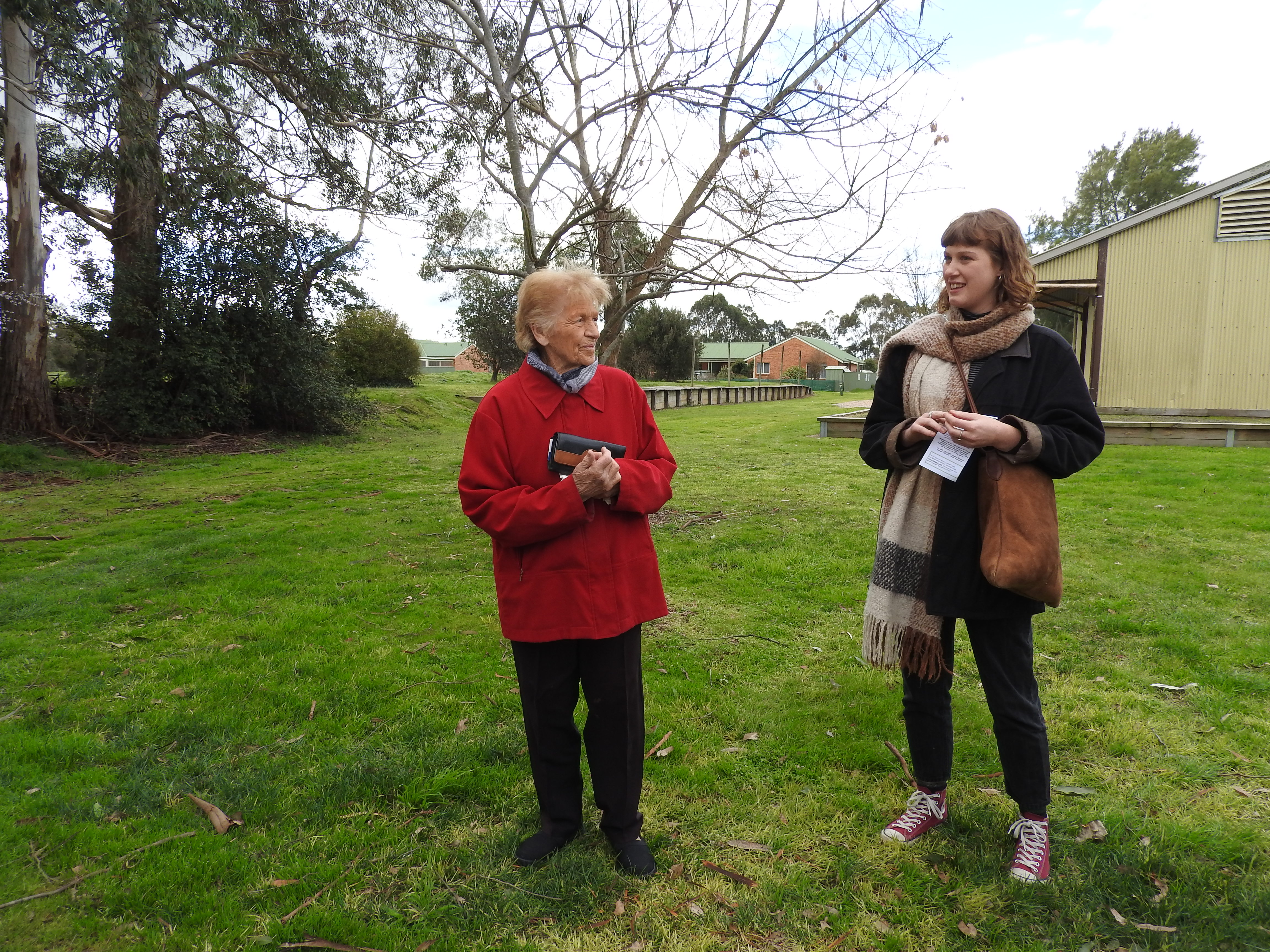 This story is part of a special series by The Citizen, co-published with ABC Gippsland. Check out the whole package of stories here. 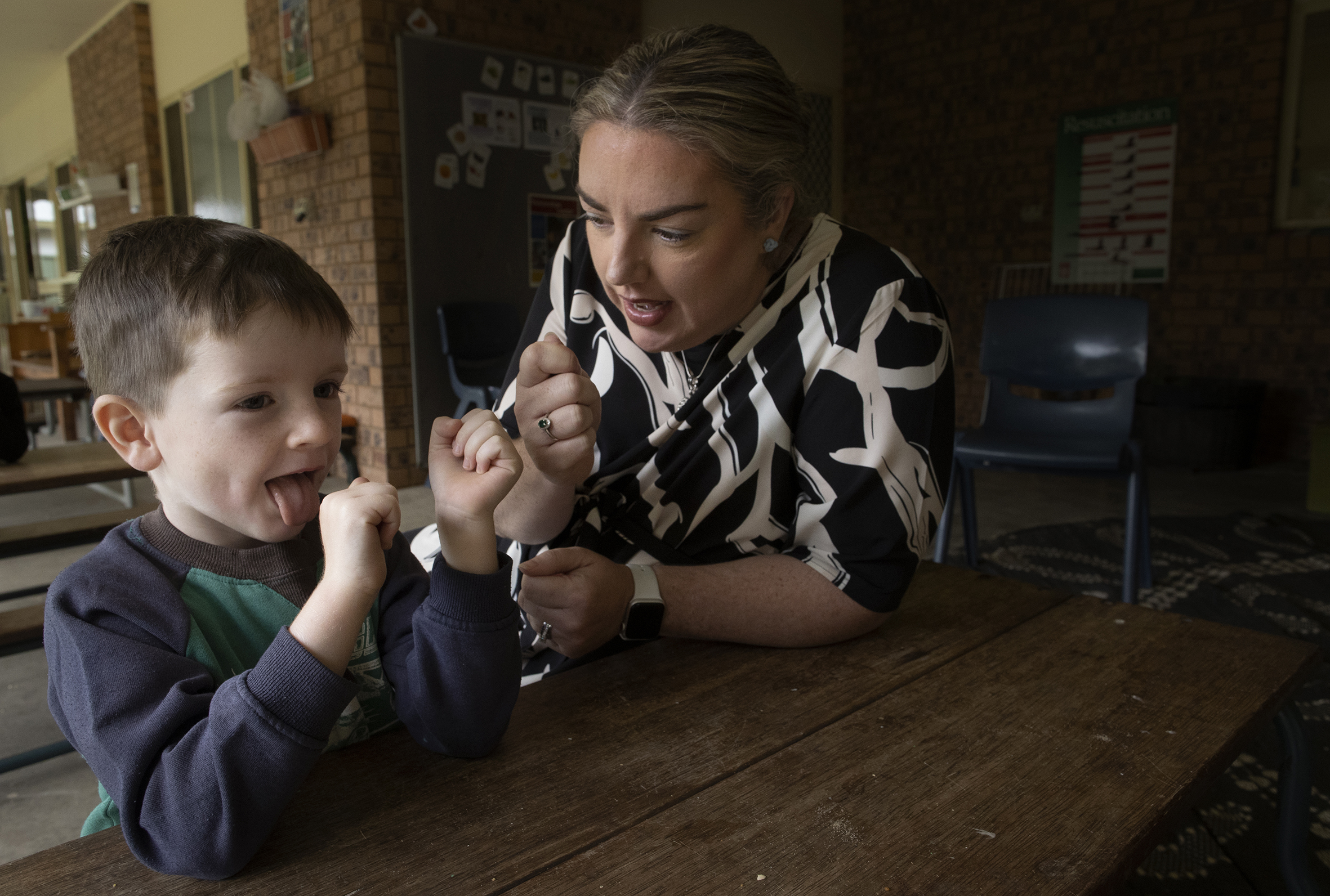 Exposure therapy: The challenge of facing your fears head on