Anthropologist Suzi Hutchings is looking at how hip hop and rap are providing a space for Indigenous youth to talk about issues of social justice. She spoke to Karen Coombs about her research.

‘I have been an Indigenous and social anthropologist for more than 20 years. I have worked throughout Australia researching and producing court reports on behalf of Aboriginal communities in the areas of criminal justice, family law and native title.

My work, therefore, has allowed me to interact regularly with Indigenous communities, including youth and young adults. During my work, it became obvious to me that Aboriginal kids and young people were showing an increasing interest in hip hop music and dance. This became a new area of research for me.

I have held a love of hip hop and other related forms of music such as soul, jazz and R&B for a long time and I have been able to indulge this passion as a DJ and producer for the music program Crossing Tracks for the past six years.

While producing this program, I discovered how hip hop and other related music genres have influenced each other as expressions of protest among estranged and colonised peoples. Reggae music, for example, has been used for a long time by Indigenous Australian musicians as a way to talk about their history.

I noticed that Australian Indigenous hip hop and rap was also becoming a platform where Indigenous youth were expressing their views about racism and identity, and I wanted to research this further.

But first, in order to truly understand Indigenous hip hop, I felt I needed to appreciate further the history and place of origin of the genre.

In 2013, I was lucky to have the opportunity to travel to New York and spend five months at New York University on an Endeavour Scholarship studying the history of hip hop and rap.

The timing was ideal because it was the 40th anniversary of hip hop’s origins in the Bronx.

While in New York, I grew to understand hip hop as a culture and a lifestyle. It is family friendly and based within a community that people are born into, and is passed down the generations.

“ . . . by the 2000s there was an underground movement emerging where Indigenous youth were growing attracted to and performing hip hop at an increasing rate. The lyrics of their songs reflected young people’s emerging views about racism, poverty and social dislocation.”

The many hip hop musicians and DJs and B-Boys and B-Girls (break dancers devoted to hip hop culture) who I spoke with, emphasised the distinction between corporate rap, which is designed to make money for music companies, and authentic rap and hip hop, which comes out of the experiences of a community.

It is acutely connected to the genre’s historical origins in The Bronx, which at the time suffered from poverty and racial dislocation.

Indigenous Australian hip hop has a much shorter history but it is similar in that it also has been created out of a place of dispossession and survival.

What I believe my findings confirmed, therefore, is that the hip hop and rap culture has provided a new generation of Indigenous Australians with a place for expressing their emotions and voicing their ideas about the constant challenges they face experiencing racial prejudice in Australia.

For example, many Indigenous hip hop artists or fans of hip hop were behind – or in support of – the large protests in Australian cities in May last year against the federal and state governments’ intention to remove Aboriginal communities off their lands in remote regions.

Artists such as Lady Lash and Stand Proud joined forces in their music and produced a song that clearly expresses Indigenous people’s hurt and anger at such a proposal.

When I was studying for my PhD in the late 1980s, I was undertaking field work in the South Australian country town of Port Augusta. Heavy gangsta music was starting to be played in clubs in the steel production town of Whyalla. The clientele were mostly young white males who worked for the steel manufacturer BHP.

Aboriginal youths were rarely allowed to enter these venues. Hip hop, therefore, was generally not heard by Aboriginal people and the kids were more interested in the country music of their parents or 1980s pop music on the radio.

But by the 2000s there was an underground movement emerging where Indigenous youth were growing attracted to and performing hip hop at an increasing rate. The lyrics of their songs reflected young people’s emerging views about racism, poverty and social dislocation.

But it is the rhyming and rhythms of rap that sit so well alongside Australian Aboriginal traditions. Storytelling is intrinsic to Aboriginal culture and rapping is a way of telling a story.

For a generation before, it was country music. Country music certainly has a tradition of storytelling and Aboriginal people embraced the genre to tell their history of being removed from their land and put onto the missions.

Indigenous Australian hip hop and rap music could be a new way for telling old stories. It may not be entrenched in the same history as the United States, but it is authentic. Most Australian Indigenous artists are very aware of the genre’s true origins and history in America.

I think, often, those who are disenfranchised are drawn to hip hop at a fundamental level.

But it is not just about the music. It is about what you wear, how you think about things and what you know. It is a lifestyle and community to which people can belong, too.

Many of the artists use their music as a way to be involved in the community. They might run hip hop workshops for youth or visit prisons and teach inmates how to express their experiences though hip hop music and rap.

And it is fun, too. Kids can rap about going hunting or what games they play with their friends. It brings people together. It’s not always about the hard topics. ’

► Dr Suzi Hutchings is a Central Arrernte woman. Her mother’s family are from Alice Springs. Her initial research conducted at the New York University has formed the background to her current research into Indigenous hip hop and rap. 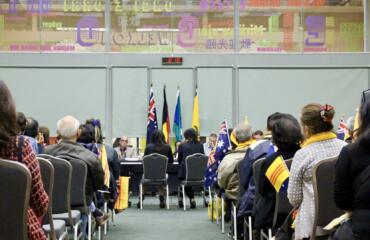