Animal welfare groups are worried that years of effort to stamp out cruel pet farming practices are at risk in the exploding seller’s market for pandemic pets. Jessica Greenan reports. 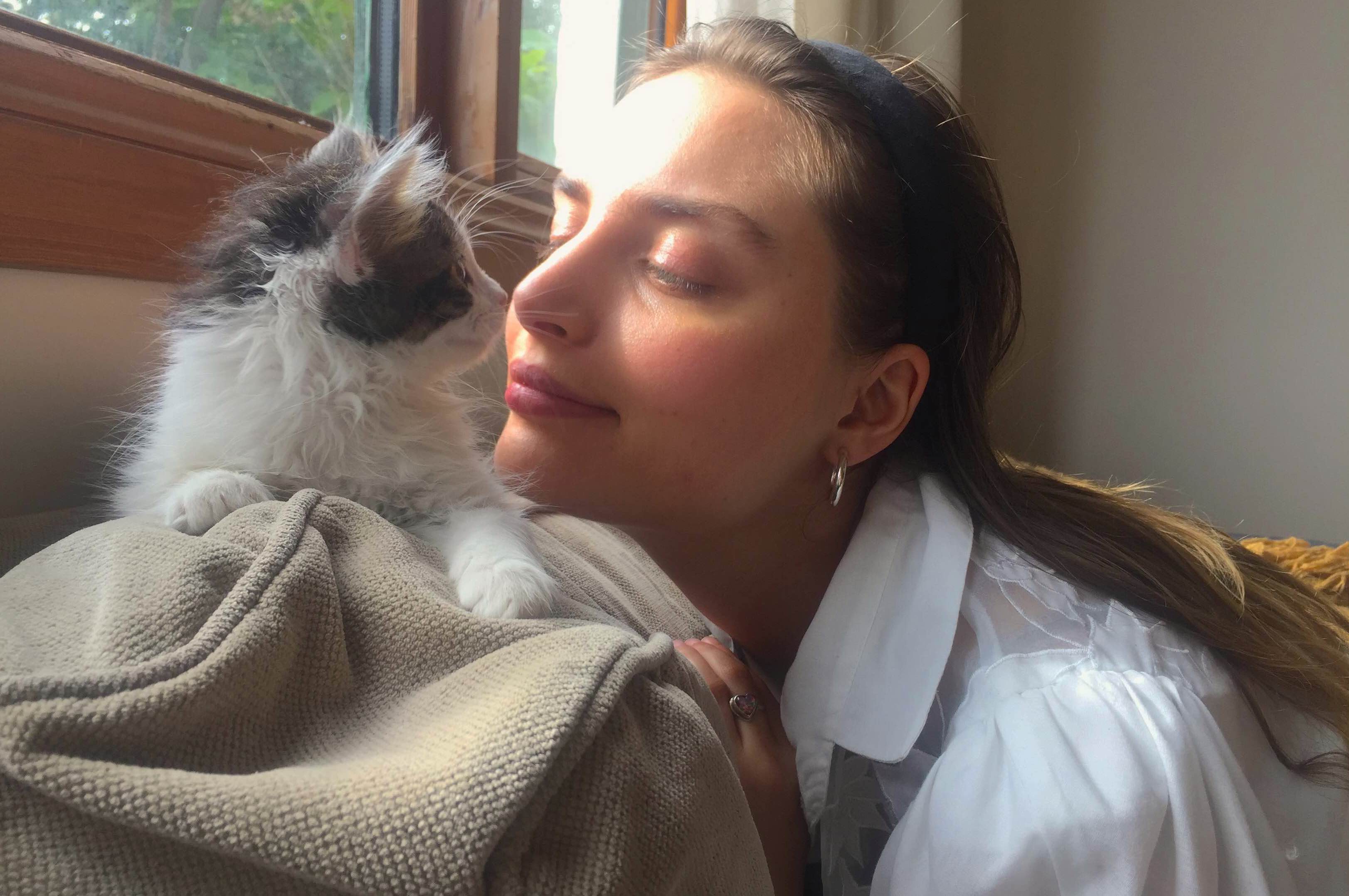 Jane Capel-Stanley, pictured with Donna, encountered some disturbing practices and conditions in her long hunt for some kitten company.

Adopting an adorable kitten has been at the top of Jane Capel-Stanley’s to-do list for years, but it wasn’t until she began working from home as the first wave of pandemic restrictions hit that she decided now was the right time.

She could never have anticipated the kind of no-holds-barred bidding war she was about to enter in the fierce frenzy of competition for companion animals during lockdown.

“It’s almost impossible trying to find a kitten anywhere right now because everyone has the same idea … it’s like trying to apply for a house or a job,” she says. With RSPCA Victoria reporting that the organisation received 1600 adoption applications during just a single week at the height of the first state lockdown, and national website PetRescue noting double the number of adoptions compared to this time last year, the shortage of available shelter animals has prompted concerns from animal welfare organisations about exploitative breeding practices and profiteering.

Australian Animal Protection Society general manager, Ms Megan Seccull, says she holds particular concerns for the welfare of pets purchased on the internet as the ability to police an increasing number of online marketplaces is “notoriously difficult”.

“Although sellers can no longer list multiple dogs on websites like Gumtree because you have to have microchip numbers now and it’s a little bit more policed, people are always finding new places online to breed and sell their pets [meaning] we can’t control who those pets go to,” Ms Seccull says.

The increased demand for pets online has also prompted police in Victoria and South Australia to issue warnings to prospective pet owners about a spike in puppy-related scams.

While mindful of the risks, Ms Capel-Stanley said she still felt she had “no other choice” than to purchase a kitten online after realising her local shelters were empty.

“I finally found one on Gumtree, but even then, there were multiple people wanting her so it dissolved into a total bidding war,” she recalls.

“I tried to win the sellers over by telling them about my living conditions and how stable my job was, but they didn’t care about that – they just wanted to know who was willing to pay the most.”

After a brief meeting over FaceTime, Ms Capel-Stanley then paid hundreds of dollars for a kitten she understood to be a popular Ragdoll-cross breed.

“They said that was why I had to pay a premium for her, but when I took her to the vet they told me she definitely wasn’t (Ragdoll),” she says. “I guess that’s what you’d expect from Gumtree.” Oscar soon after his rescue from a puppy farm and, below, with animal welfare advocate Debra Tranter, who lobbied successfully for “Oscar’s Law” pet farming reforms.

Oscar, an ex-stud dog who spent five years locked in a shed in Central Victoria, inspired his rescuer Ms Tranter and a team of volunteers to lobby for a government bill banning puppy farms which came into legislation in 2017. “I’m always concerned when people choose to buy animals with a few clicks of their mouse.

“The COVID-19 restrictions are the kind of conditions that puppy farmers enjoy as it makes it easier to simply hide behind a website or online ad. People could be inadvertently supporting puppy factories in their quest to seek out a puppy during this time.”

The concerns of Ms Tranter are well founded, says Ms Capel-Stanley, who says she came across some “disgusting ‘rescue’ houses” while searching for her kitten.

“Some of them were really weird, where there were cats and cat litter everywhere in all the rooms.

“It’s clear that some people are definitely taking advantage of the situation to make money selling animals during this time.”

Animal rescue volunteer Gracie Ostapiw has also noticed an increase in cat hoarding cases coming to the attention of authorities, and an escalation in backyard breeding during the lockdown period.

“This month I rescued another pregnant cat named Adelaide, who is 11 years old, from a hoarding case while working with Salsman Cat Rescue in Horsham,” she says.

“It was clear that she had two or three litters recently [and] this time she ended up having eight kittens which were all adopted out very quickly.” Australian Animal Protection Society general manager Megan Seccull says she worries about the welfare of pets purchased on the internet, as the ability to police online marketplaces is “notoriously difficult”.

To Ms Seccull, the demand for pets and the potential consequences it has for the welfare of animals comes down to the “impulsive nature” of humans seeking companionship.

“People are just too blasé,” she said.

“They might be at home 90 per cent of the time now, but their dog won’t understand why their human is gone when the pandemic is over. They might start digging, chewing and doing other things that might annoy people – and where will that dog end up? Back in the shelter.”

To circumvent post-adoption issues, several animal shelters including the Australian Animal Protection Society have revised their adoption regulations to include a pre-application questionnaire about how the pandemic has affected candidates’ livelihoods.

Lort Smith Animal Hospital has also extended its already vigorous adoption process to include a pre-adoption questionnaire, interview, police check and meet-and-greet before a final panel meets to determine the best candidate match for each pet.

“We’ve implemented follow-up consultations to offer tips and advice on how to settle in their pets so they don’t bring them back. We’ve also set up our “Pet Squad” team who are currently offering Zoom consultations too,” Ms Talevski said.

“Our number one mission is to adopt out as many animals as possible, but we just want to make sure it’s for the long-term.”

For Ms Capel-Stanley and her kitten Donna, the relationship is “definitely forever” despite the her kitten’s lineage not being quite what she bargained on.

“I don’t really care if she’s pedigree or not, even though I’ve heard Ragdolls are especially friendly,” she said.

“When I first got her she was the size of a size six shoe, and now she’s more of a size 10 … I love seeing her grow and it was definitely the right decision.”