Momentum for a Green New Deal is gaining traction internationally. In the ashes of Australia’s “climate change election”, can such a concept get a toehold? Claire Capel-Stanley reports. 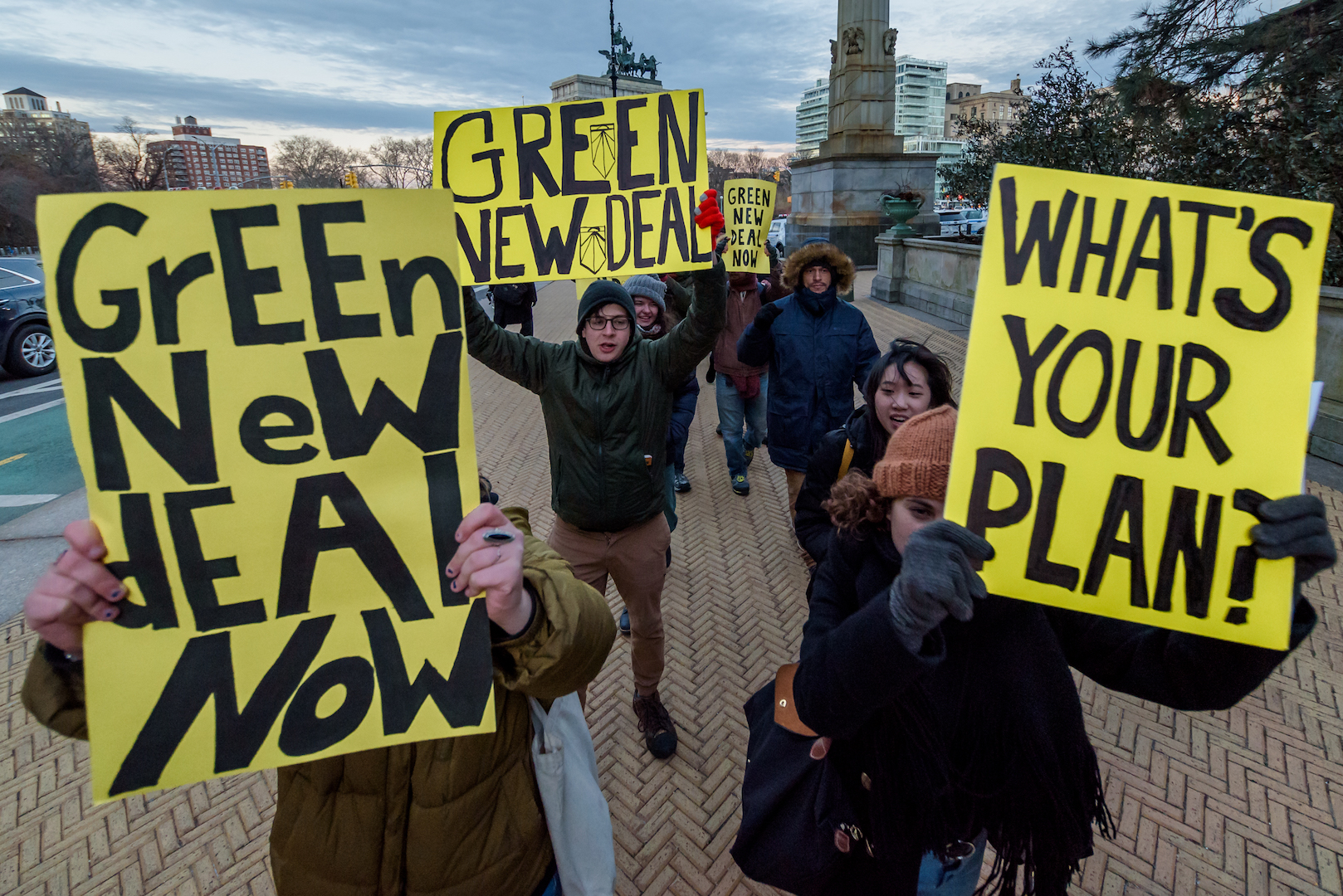 In the heat of Australia’s “climate change election” last month, Bessie Byrne strung a massive hand-painted banner across the front of her Brunswick house.

“I want you to vote as if your house is on fire, because it is,” it declared – a twist on a viral quote by megastar Swedish teen climate activist Greta Thunberg.

Like so many others galvanised for action on the climate crisis, Byrne was stunned and dismayed when Labor, which had promised stronger policy on cutting greenhouse gas emissions, was defeated. “It’s been a wake up call for a lot of people,” she says.

Byrne is a born activist. She protested with her parents as a toddler. When she was a child, former Greens leader Bob Brown stayed for a time at her family’s property. Keenly tuned into the warnings of scientific leaders and academies around the world that the planet is on track for climate catastrophe, she’s distressed at the prospect of more years of political inertia, and wondering where the movement can go from here.

It’s a reckoning activists Anna Sturman and Tash Heenan, members of the radical Climate Justice Collective, might have pre-empted. In February, after the hottest summer on record left some communities in New South Wales without water, they circulated a draft for a “Green New Deal”, echoing the resolution of that name tabled that same month in the United States Senate by Alexandria Ocasio-Cortez, but pushing even further.

It outlined a politically extreme agenda to decarbonise the economy while addressing social, economic and racial justice issues in specific communities – a wishlist of ambitions way outside the comfort zone of many voters. But after years of political head-butting, and with a newly-urgent timeline fuelled by cascading scientific warnings, supporters say some kind of green new deal approach could breathe new life into Australia’s stalled climate politics.

The notion of a “Green New Deal”, a nod to President Franklin D. Roosevelt’s nation-building reform agenda coming out of the Great Depression, has been around globally since 2007. But its popular recent currency is courtesy of one key champion. A 14 page non-binding resolution for a Green New Deal was put before the American public in February by charismatic Senator Alexandria Ocasio-Cortez, backed by the Sunrise Movement.

Although a vote on her proposal failed in March, the initiative is credited with making major inroads into the climate debate in that country. Pundits are backing that a Green New Deal will be a big part of the US political vernacular heading to the 2020 presidential election.

Social media has galvanised discussion of the idea, with @AOC’s four million followers quickly spreading the world via the #GreenNewDeal hashtag.

In April, a “Message from the Future” video articulating her vision went viral, retweeted over 39,000 times. Support quickly spread beyond the Twittersphere. A survey by YouGov found that 59 per cent of Americans were supportive of the aims of the plan, with just 28 per cent opposed.

In Australia, Friends of the Earth’s “Yes to Renewables” campaign co-ordinator Pat Simons watched as the concept gained traction with local climate activists.

“Everyone’s looking at that and just thinking, wow that’s incredible energy,” he recalls.

“It’s really inspiring, both in the actual content of what those activists are pushing for, and even tactically.”

The push comes after years of what Simons calls “proxy campaigns”, where activists have targeted one energy project after another, most notably – and so far unsuccessfully – Adani’s Carmichael coal mine in Queensland, which last week controversially received its final environmental approval from that state’s government. Activists make their message clear in the Deakin electorate of Melbourne before the May election.

There have been wins but sometimes – as with Adani – one project has overshadowed the scale of the climate crisis. Through such a narrow lens, often “climate change wasn’t even necessarily in the frame,” Simons says. Meanwhile, there’s been little progress on confronting what wide-scale transition away from carbon really means for communities.

A Green New Deal discussion would require recognising and engaging people most affected by decarbonisation, he argues. This would be a quantum shift, because despite surging enthusiasm for movements like SchoolStrike4Climate and Extinction Rebellion across Australia, traction within communities which rely economically on the fossil fuel industry has been almost non-existent.

Unsurprisingly, the ABC’s Vote Compass tool found support for the Adani project is stronger the closer you get geographically. After the election, The Guardian published a graph showing that swings to the Coalition were larger in seats with coal mines, like Queensland’s Herbert and Capricornia where Adani is located.

In the bruised aftermath of Labor’s debate, shadow environment minister Tony Burke told The Guardian that Labor needed to adopt new policies of regulation and spending akin to the Green New Deal model being pursued by some US Democrats. While Labor rethinks its policy platform in the wake of its defeat, leader Anthony Albanese has called for an end to the climate wars.

The Greens’ Senator Adam Bandt tweeted his support for a bipartisan “Green New Deal” as the “only way out of this cul-de-sac”, but has said he’s concerned that Labor was taking the wrong lessons from the Queensland vote, and could yet capitulate on climate action.

Nobel Prize-winning economist Joseph Stieglitz recently urged the adoption of a Green New Deal as a counter to the “existential” crisis of climate change. But despite the popularity of a Green New Deal among climate science and policy specialists, it’s been slow catching on in the Australian mainstream. Brunswick activist Bessie Byrne hadn’t heard of it when interviewed by The Citizen.

“It requires a really engaged and ongoing support process to transition an entire society or community from depending on one industry to depending on a new industry. It exists, but it’s hard,” Corby-Perkles says. She points to the experience of Victoria’s  La Trobe Valley, where the Hazelwood Power Station was decommissioned in 2017, and the community is grappling with the effects of transition.She sees the power of a Green New Deal dialogue as largely symbolic, with the value coming in the discussion it generates.

“Part of the discursive effect is that it is not just about this thing – climate change – but it’s about what the job of a government is.”

It’s the central role of government in as the mix that represents a fundamental break between the Green New Deal model and previous focus on market mechanisms to decrease emissions.

In a Green New Deal, the market is not framed as the primary solution. Dr Kyla Tienhaara, an expert in economy and environment at Canada’s Queen’s University, explained a Green New Deal to The Citizen as “essentially ‘green industrial policy’. Neoliberal strategies like carbon pricing might still play a role, but they are not the focus.”

The pivot away from the market-based strategies is largely due to the fast-expiring window for action. A report by the United Nations Intergovernmental Panel on Climate Change last year gave a 12 year deadline before a catastrophic level of warming is locked in.

Friends of the Earth’s Simons, a seasoned climate activist, sees the Green New Deal movement as an opportunity to draw a line under the assumption that the market alone will be up to the job of decarbonisation.

But it’s that government-versus-market framing that could be a problem when it comes to getting a Green New Deal off the ground in time, according to Sydney writer and activist Osmond Chiu, who questions “whether people are seeing it as being about a just transition, or about a big anti-capitalism movement”.

He also believes that relying on action at the federal level, rather than looking to local government, could be a mistake.

“Really it should just be about what can you get done easily and practically within that time frame,” he says.

As the dust settles on the May poll, and climate specialists and activists gird themselves for the next round, many are wrestling with the realpolitik of their ambitions, their tactics, and the ticking clock of opportunity to effectively haul down emissions.

The Climate Justice Collective’s Anna Sturman would like to think the grassroots movement can sell the message into the Queensland coal heartland and similar communities that a Green New Deal represents future security rather than risk. But she recognises this is, generously, a long shot.

“If we win, it will be a fucking miracle. But that doesn’t mean to give up, like, we have to try. We have failed those people by not organizing them well enough.”