50 shades of ‘No’: A t-shirt campaign for the hard of hearing #IWD

No means no. But lots of other words and phrases also mean … no. A Melbourne-born campaign, “50 shades of No”, tries to put the sometimes fuzzy issue of sexual consent into sharp focus. Benjamin Ansell reports. 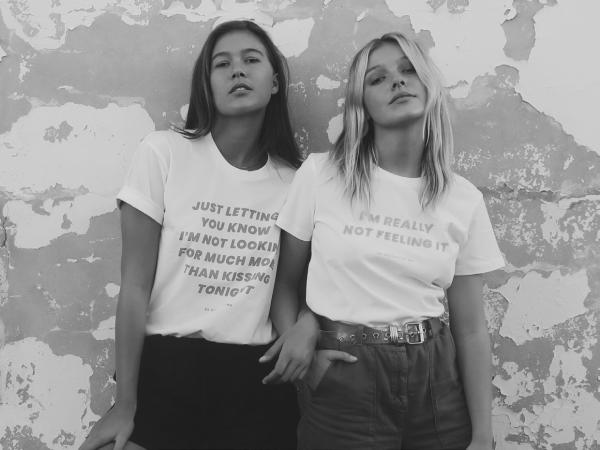 “I have work early tomorrow.”

If you’ve been on the receiving end of these lines, we have some news. These are samples from a collection of statements women commonly report using when trying to send the message that, well, they are just not feeling inclined to have sex.

The phrases have been emblazoned on grey t-shirts and are being marketed as part of a new social awareness campaign aiming to bring more focus to the fuzzy issue of sexual consent. The campaign is the brainchild of Emma and Katrina, two young Melbourne creatives who work in the advertising sector.

Inspired by discussions inspired by the #MeToo movement, and in particular the heated debate around accusations levelled at actor Aziz Ansari, the pair have been busy delving into the grey areas of consent.

“We reached out through our networks and created a Facebook page as a way to get responses back. Through that we collated a whole lot of responses from people on ways they’ve tried to say no,” co-founder Emma told The Citizen.

The social awareness campaign, “50 Shades of No”, is set to launch today, International Women’s Day, 8 March. Drawing on the pair’s research, t-shirts in 50 shades of grey will sport 50 real-life verbal and physical cues women use during sexual encounters where they didn’t feel comfortable saying an outright “no”.

“Our research and discussion with women shows it’s beyond ‘no means no’. Oftentimes the situation is such that they [women] want to avoid conflict, embarrassment or compromising relationships,” Emma said.

Using social media platforms, the pair collected anecdotal evidence from over 200 women from around the world. “What’s really impressive is how many people have got behind it in such a short space of time.”

Bringing together influential women, the “50 Shades of No” campaign will co-ordinate social media posts on March 8 with the likes of The Preatures lead singer Izzi Manfredi and fitness guru Tiffanee Cook.

The movement capitalizes on the continuing aftershocks of the #MeToo moment that kicked off in Hollywood in 2017. Revelations from more than 70 women accusing Hollywood producer and powerbroker Harvey Weinstein of rape and sexual misconduct evolved into a world-wide campaign calling out abuses of power and sexual misconduct.

“Our aim is not to man-bash, or put the responsibility solely on men, to be hyper vigilant or hyper-sensitive to women’s cues,” says Emma. “But to create the understanding that sometimes saying no is difficult.”

The launch comes just a week after the release of The Red Zone – an investigation into sexual violence and hazing in Australian university residential colleges published by the End Rape on Campus group.

The group believes the report shows a systemic problem in some of Australia’s University colleges, highlighting rituals that expose students to sexual abuse and harassment, with new students during last week’s Orientation week (O-week) being especially at risk.

Proceeds from the t-shirt sales will go to American based non-profit organisation Project Consent. An organisation that aims to combat sexual assault and rape culture by raising awareness, spreading education, and promoting consent. Festival done, and ever so slightly MIFF’d