A young man’s love of motorcycles saw him line up for what was billed in 1955 as Australia’s “most notable” road race. And so ended a too-fast life. Chelsea Cucinotta continues our Graveyard Shift series of lost stories from Melbourne General Cemetery. 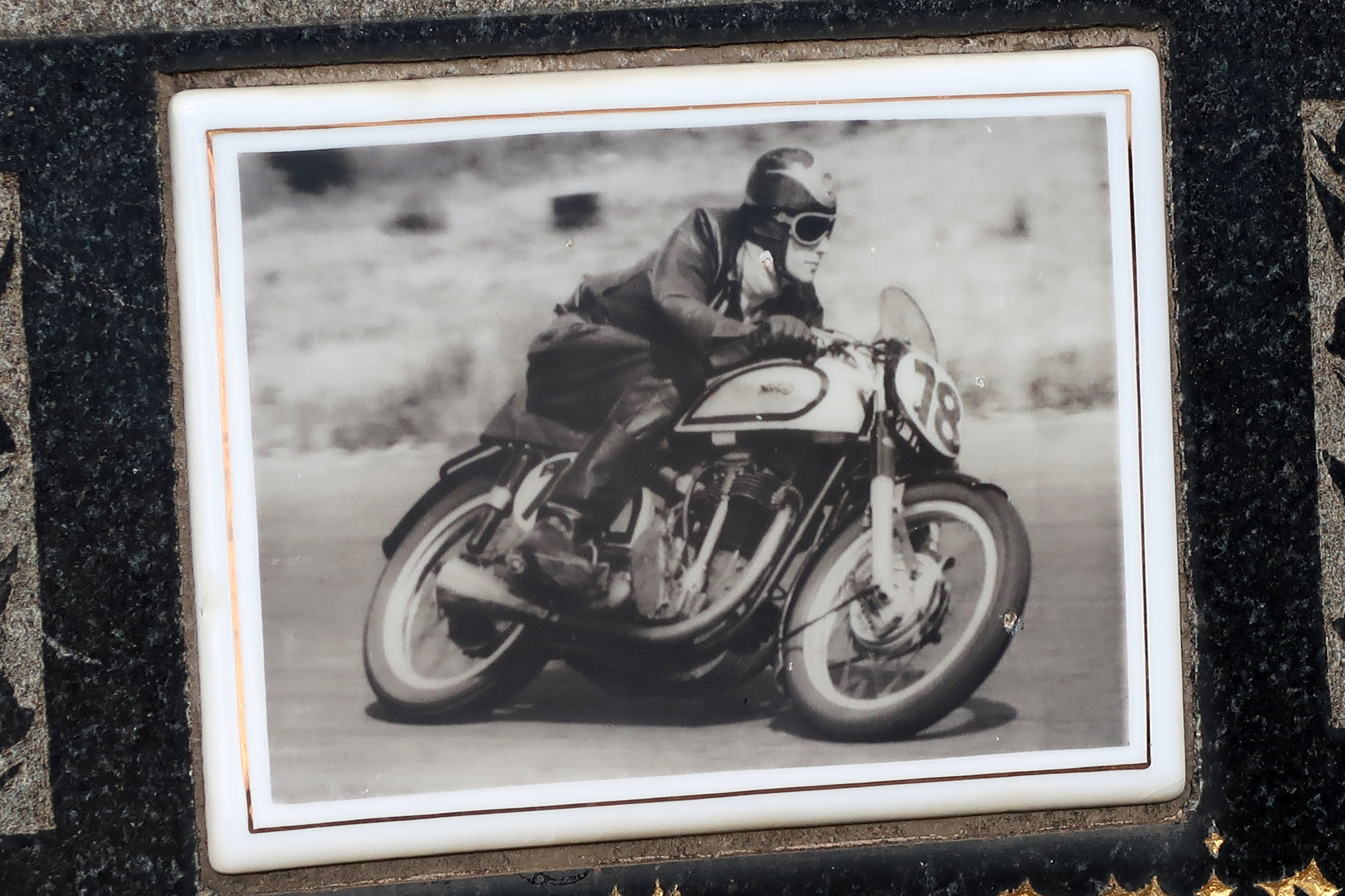 In a black and white photograph, Ernest Alvin McLean is riding a 500cc Norton motorcycle, the number 78 printed on its front. He’s gripping the bike’s handles as he takes a corner. There is no eye contact with the camera, but rather a look of determination on his face. This photograph is etched onto his grave at the Melbourne General Cemetery.

McLean’s love for motor vehicles began at a young age when he worked as a garage attendant on Allen Place in Adelaide. Yet this very admiration for motorcycling appears, from the records, to have put him onto a troubled path.

In 1949, McLean and a 17-year-old “unlawfully used a motorcycle which had been left by the owner in a street on the night of October 7”, reported The Advertiser.

McLean and the youth were arrested after a police chase. He later pleaded guilty and entered a good behaviour bond for two years. By 1955, McLean was living in North Carlton when he entered the Bandiana Classic Road Races, held in Wodonga by the Auto Cycle Union of Victoria.

More than 300 riders from clubs across the country eagerly assembled in Bandiana. McLean rode with the Hartwell Motor Cycle Club, established in 1931. In order to compete, he would have obtained a competition licence issued by the Auto Cycle Union.

“The January 30, 1955 meeting was a very big one as the star attraction was the world champion Geoff Duke from England.”

The Argus described the competition as “the most notable . . . in Australian road-racing history” with a 500-pound prize pool.

Yet unlike modern circuits, this one was not purpose-built and used roads in the Bandiana Military Camp.

“The layout provide[s] a series of six reasonable fast right-angled bends closely spaced, two long speed stretches with fast bends, and a hairpin,” The Argus reported. A trial was held for participants on Saturday, January 29.

In the midst of all the hype, an ambitious McLean was fuelled with adrenaline. He was riding with an audience of 2000 people – living his motorcycle dream. Then, within a split second, he lost control of his vehicle and crashed. This is how McLean died.

“Two thousand people saw a speedway motorcycle rider crash to his death while racing at 100 miles an hour at Bandiana,” wrote The Sydney Morning Herald.

The Canberra Times also commented on the incident, describing McLean’s “high-powered machine [getting] out of control and crash[ing] through a fence”.

Accidents of this nature were not uncommon at the time. “Whereas today there exists a high degree of community awareness about road safety, in the days of an emerging new transport technology road safety matters were not a major consideration,” a TAC report said.

“Safety has changed immeasurably since the 1950s,” says Scaysbrook.

“Circuits are now no longer lined with trees and ditches (as was Bandiana), and riding equipment such as helmets and suits are far more sophisticated.”

McLean was buried on February 1, 1955 at the Melbourne General Cemetery, two days after his motorcycle accident.

At just 23 years of age, the nature of McLean’s death is marked by the gold inscription at the centre of his tombstone: “accidentally killed”. Eleven years later his brother Bobbie, also killed too young by an accident, joined him in the grave, and a footnote was inscribed in gold.

“Always in my thoughts – Mother” Through the lens, a treasured archive of vanishing history