Melbourne’s major sewage treatment site also happens to be one of the country’s richest waterfowl habitats. So both humans and birds will be up the proverbial creek under even best-case projected climate scenarios.  Jess Cockerill continues our Going Under series examining local impacts of projected sea-level rise. 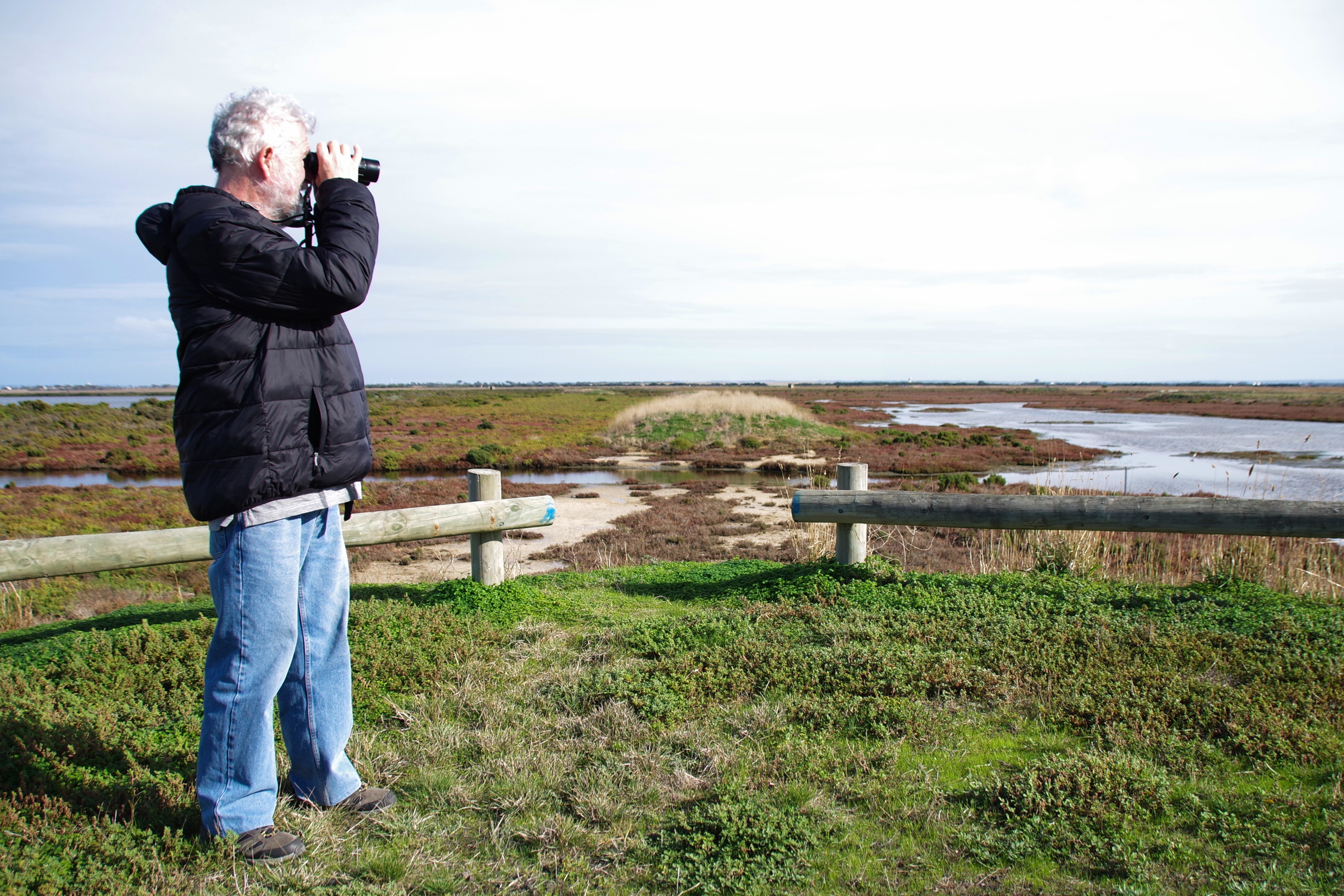 Dave Torr has been birdwatching at the Western Treatment Plant for over 10 years. He’s concerned about how rising tides will impact the browsing of waterfowl migrating from as far away as Siberia. Photo: Jess Cockerill

More than half of Melbourne’s sewage goes to a historic treatment plant at Werribee, about 45 minutes drive west of the CBD.  But the site’s long term viability is in question, with scientific modelling showing that under humanity’s current course of high emissions scenarios, much of the site will be vulnerable to higher sea levels by 2100. Even assuming drastic international action to rein in to a low-emissions future, the site faces major challenges from inundation.

The Western Wastewater Treatment Plant covers roughly 10,500 hectares of land along the coastline of Port Phillip Bay, bordered by the Werribee River to the east and Princes Highway to the north.  The treatment plant facility actually takes up a fairly small portion of the site, the remainder being used for agriculture, renewable energery, eco-tourism and birdwatching. It also happens to also be an internationally recognised wetland habitat for migrating waterfowl, and is listed for conservation under the Ramsar Convention. 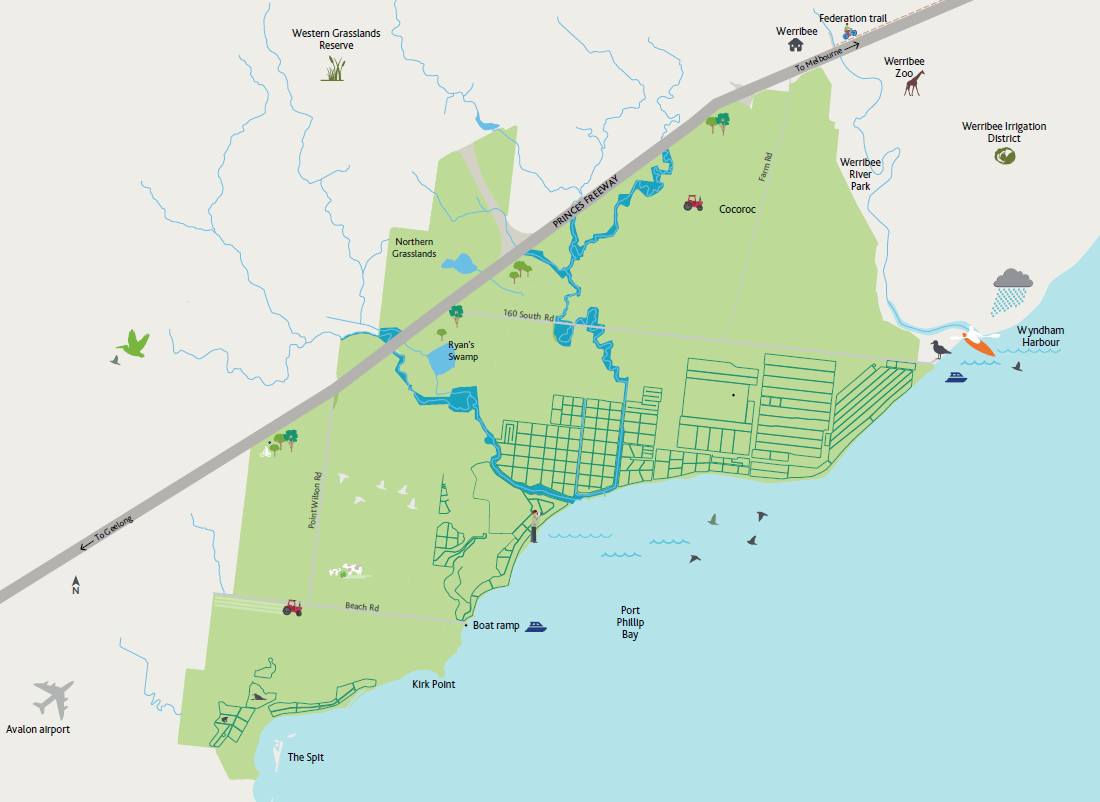 The plant recycles more than 40 billion litres of water each year. According to Melbourne Water’s website, it is celebrated as a world-class example of sustainability for its water recycling and sewage gas-generated electricity. It processes raw sewage in sealed tanks, and then releases the wastewater into a succession of low-laying, open ponds, eventually emptying into the bay. 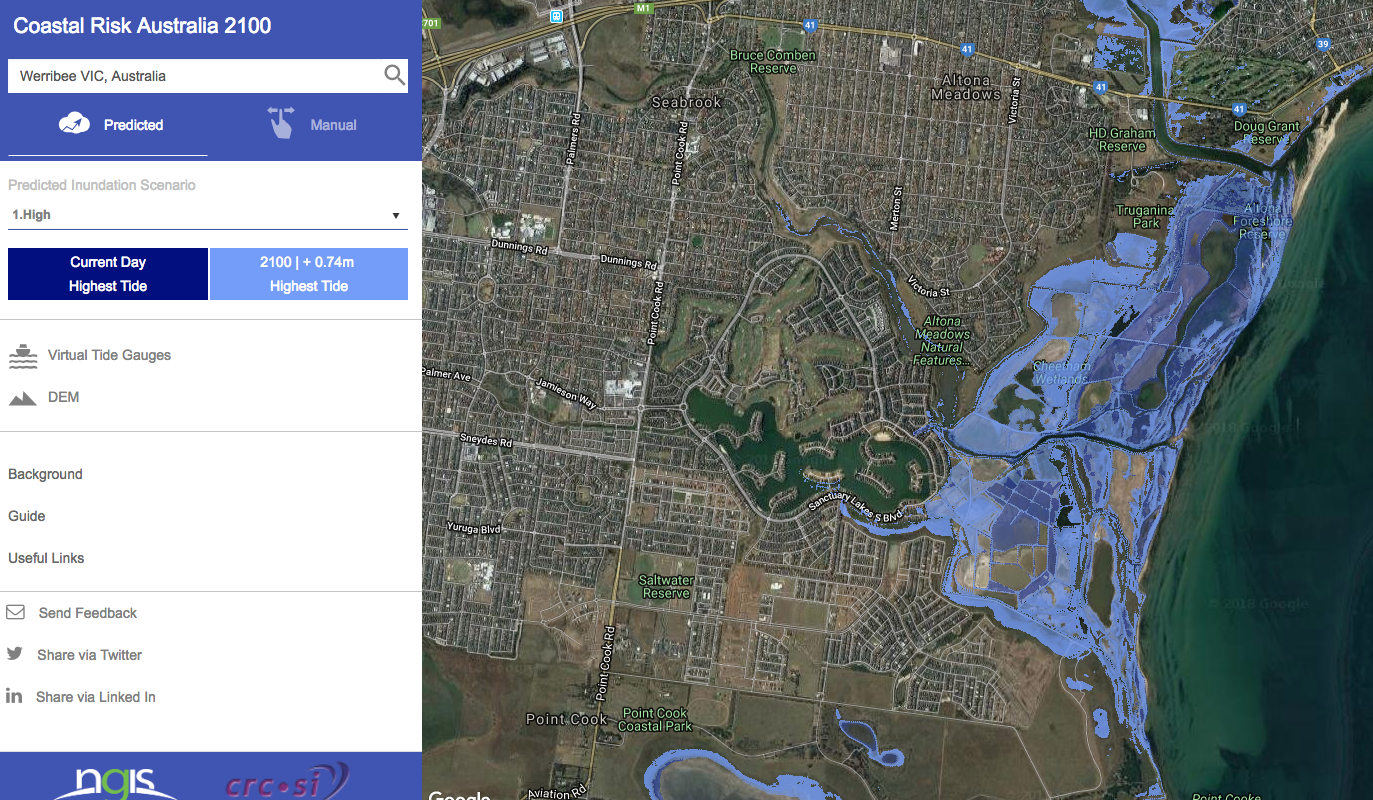 Under the high emissions scenario, in line with recent emissions levels and observations, highest tides in 2100 would be .74m above current levels, resulting in coastal waters inundating almost a quarter of the plant.

Conservative estimates – in which sea levels would rise by 0.44 metres by 2100. It allows coastal waters to creep in along two main channels at the treatment plant, and about 100 metres in from the existing coastline.  The low scenario “considers sea level rise in the context of a global agreement which would bring about dramatic reductions in global emissions”.

Water management of the catchments that feed into Port Phillip Bay is central to Mr Blake’s work around environmental advocacy at the EcoCentre. He says the bay is affected by water runoff in an Australian context, because it is quite closed-off from the open ocean.

“The lack of rainfall in those could actually diminish the quality of the water in the creeks, that contribute to the major rivers such as the Yarra, and that’s going to be a negative in terms of maintaining the existing health,” he says.

Climate change is also expected to bring more extreme flooding when it does rain, which Mr Blake says, Melbourne’s sewage system is not built to handle.

“As the sea level rises, that’s actually going to cause the stormwater system to back up,” he says. “It slows down the ability of the stormwater flows to escape during high tide.

“If you put rising sea levels on top of that high tide and intense rainfall event, and that causes the sewer system to overflow into stormwater . . . it might be a one-in-four year rainfall event, that will cause the overflow, or one in three years.”

Melbourne Water’s treatment and resources manager Jenelle Watson says there are no short-term risks to the plant from sea level rise.

Long-term impacts were being considered by experts who would create a “foreshore climate change adaptation plan” to be implemented by Melbourne Water to protect migratory shorebird habitat, groundwater quality and vehicle access.

Mr Blake says that although Melbourne Water “seem to be putting their minds to the issue, there’s obviously going to be costs involved in whatever the solutions may be. Obviously there needs to be funding for them to implement any solutions they might come up with.”

The president of Birdlife Werribee, Dave Torr, echoes Mr Blake’s concerns. Because, the treatment plant and its surrounds are more than just Melbourne’s toilet: they are a cherished wetland with more than 280 bird species.

Some of these birds fly every year from Siberia and the Arctic, just to feed from Port Phillip Bay’s mudflats.

Thousands of ducks also seek refuge in the treatment plant’s ponds when inland waterways are dried out, which Mr Torr says, is increasingly frequent. Controlled nutrient and water levels in the wastewater treatment plant’s open ponds support an ecosystem upon which the ducks depend when other wetlands across the state are in drought.

Mr Torr says the migratory birds “spend all summer here, feeding up on crustaceans and worms, and this is good because there’s not too much disturbance from humans”.

The shallow water, he says, is significant to the birds’ migration. “When the tide comes in, they go to some of the inland ponds, there’s some food there but not much, and when the tide goes out again they feed, even through the middle of the night.

“So if the sea rises by a metre or so – on top of bigger storms and waves at high tide – it will inundate all this. The tide wouldn’t have to rise much before you suddenly don’t have the mudflats they feed on.”

Mr Torr predicts the treatment plant’s wetlands may look quite similar in 80 years, just 100-200 metres further inland. This is evident in the OzCoast maps. But he says the real issue for the migratory birds, in that case, are areas on their route where mudflats are built up.

“The birds that fly from Siberia, they’re not just dependent on us but on China, Taiwan, Japan, Korea, all these places along the way north,” he says.

“They know where the food is, they fly for two or three days, they get there, and somebody’s built a factory or beach houses on it. That’s why a place like this is so important.” 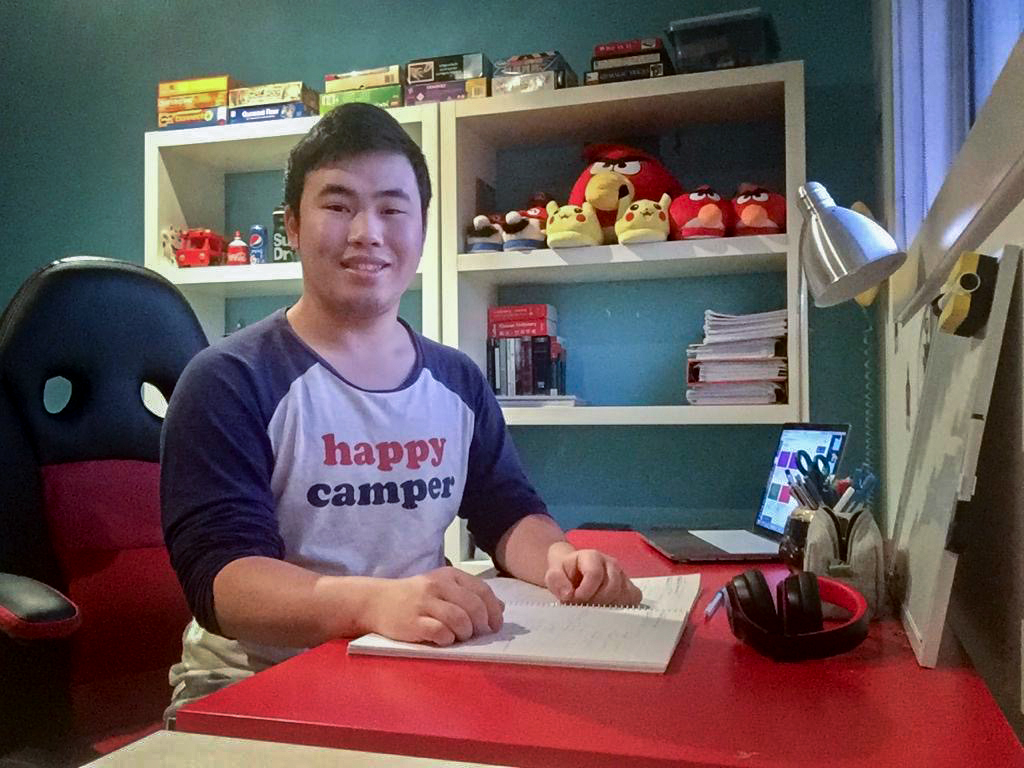 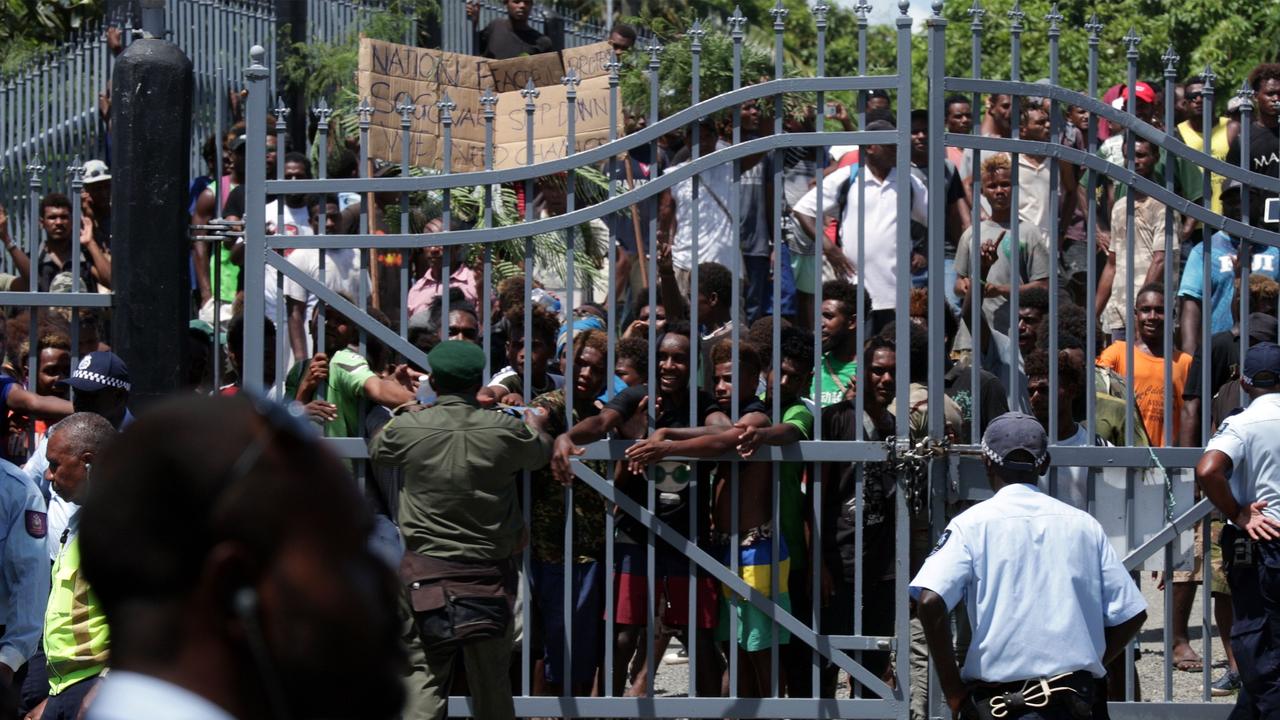 SWARM: How a cult leader charmed a following

Story by Julie May Fenwick