Superheroes and supergirls: comics fangirls are coming out of the closet

On a Sunday night in downtown Melbourne, a group of women gather to discuss their not-so-secret passion. Comic books. Yanruo Ke joins them. 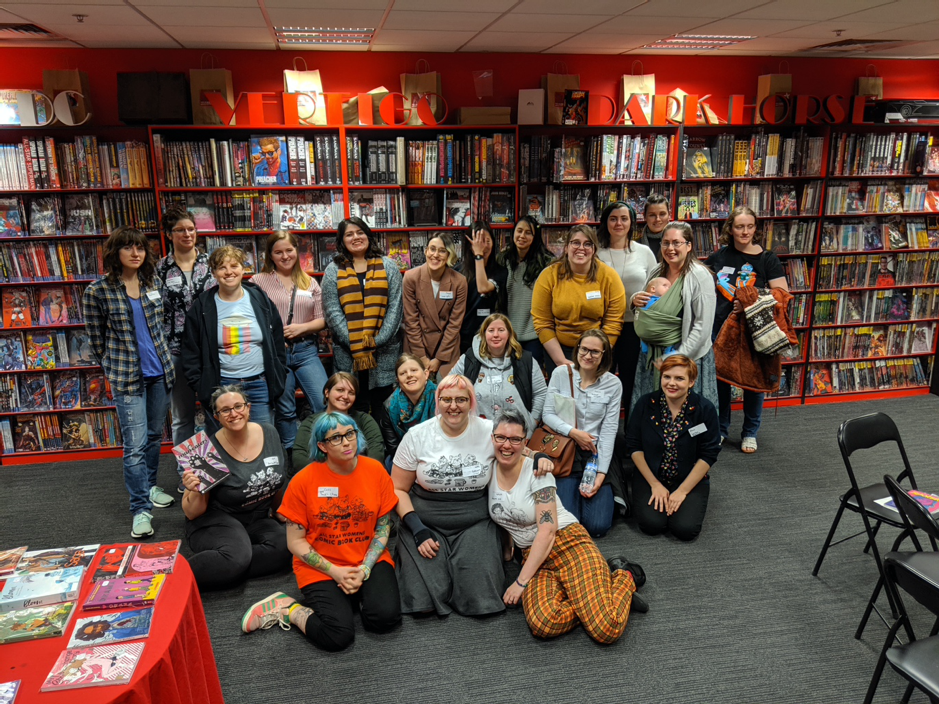 “The gendered stereotypes usually come down to (the idea of) us not being genuinely interested in comics, or bafflement that we are," says Dr Naja Later, co-founder of the All Star Women's Comic Book Club.

It’s late on a Sunday afternoon and the last customers are being shooed out of the All Star Comic Store in downtown Queen Street, Melbourne. But several women are loitering, making their to a room upstairs.

Nearly 30 female comic fans, mostly aged in their 20s or 30s, join the gathering. Each member has a label, pasted on her clothes, bearing her name and that of her favourite comic book. Most appear to not need the labels – they are already well known to each other and happily chatting.

Today’s meeting schedule has a variety of activities. There’s a “Book of the Month” discussion, a craft table, a book swap and a raffle. Attendees can choose whatever activities they want to join. If you are talkative you can join the book discussion; if you are shy you can join the craft table and make an easy eight-page folded mini-comic to keep your hands busy.

The book of this month is Maneaters – an ongoing series comic published by Image Comics. The story is about a mutation that turns women into ferocious killers.

The Melbourne All Star Women’s Comic Book Club was founded in August 2014, and has been hosting these monthly gatherings ever since. Typically, these events bring in anywhere from 25 to 50 participans, says Dr Naja Later, a co-founder of the club, and a sessional lecturer at the University of Melbourne and Swinburne. Her academic interest is in the nexus of pop culture and politics.

While there is an enduring perception that most comic enthusiasts are young boys, this gathering is evidence that gendered stereotypes about comic fandom don’t necessarily hold true.

A 27-year-old woman with glasses and curly shoulder-length hair is chatting with her friend in one corner. She has a label of “I am Angie, I like Paper Girls” pasted on her clothes. In her daily life she works as a school teacher. A lifelong comics tragic, she joined the club two years ago.

For a range of reasons, Angie says she was attracted by the notion of a club specifically for women.

For a start, she explains, she feels confident to speak more freely. “I wouldn’t be holding my tongue here like I probably would be in other environments.”

And the topics and discussions are also shaped by the demographic. For instance, she doubts that Maneaters would be chosen as the “Book of the Month” if this wasn’t a female focussed event.

Michelle is sitting on the other side of the room, quietly reading a comic book. She has short golden hair and is wearing a light blue color T-shirt. As a 42-year-old female comic fan, she says that she can clearly see that there are many more comic fangirls nowadays than there were when she was a teenager.

Michelle says that over the years, she hasn’t seen any notable skewing between gender and the types of comics fans will devote themselves to.

“I know many girls like Batman, and I know a guy who really enjoys reading Batgirl.”

Comics history followed different paths in different countries. The earliest American comics came out in the 19th century in mass print media. They grew in popularity through the 20th century, with a range of genres evolving – stories of superheroes, romance and horror. Nowadays, webcomics and digital comics keep the tradition alive, and even more accessible.

Moreover, comic book culture has gained traction with mainstream audience due to the popularity of superhero movies and TV series, mostly from Marvel and DC.

Beyond the books themselves, these days there is also a huge international scene around comic book conventions, and these also provide strong evidence of female engagement with the genre.

San Diego Comic-Con – one of the world’s biggest comic conventions – has recorded not just an increasing number of attendees, but also significant growth of female fans in recent years. Since 2015, Comic-Con has reported approximately equal gender representation amongst conference participants. It typically attracts around 130,000 attendees every year and around half are female.

This reality is something that mainstream media and the public has been slow to recognise, perpetuating a masculine framing around the comics culture scene.

People who’ve watched the popular The Big Bang Theory television series might be familiar with how Stuart’s comic store is almost always full of men; or scenes where guys hotly debate comics culture while their girlfriends look indifferent or disinterested.

“People are occasionally surprised that we have a women’s comic club, because of the assumption that women would only read comics for men’s attention,” says Dr Later. “The gendered stereotypes usually come down to (the idea of) us not being genuinely interested in comics, or bafflement that we are.”

Dr Later agrees with fangirl Michelle that there is a recognisable increase of women comic readers in recent years.

Aside from being stereotyped as “fake” fans, another barrier is the stereotype that comic fangirls are enjoying comics in the “wrong” way – perhaps they’ve received as overly-excited or too creative.

“These ways of enjoying comics are treated like overreactions, where women (much more than men) are meant to uncritically, unemotionally receive the stories they are given. Any creative or critical input is seen as defiant or deviant,” Dr Later says.

“This comes back to the assumption that if men find over-enthusiastic reactions unappealing, then there must be something wrong with women who enjoy comics this way.”

She thinks that there are definitely more female fans out there than there were decades ago, but concrete figures in the world of comics are notoriously hard to come by because publishers and comics retailers do not share that data publicly. Most of the data comes from Comic-Con, but it’s hard to track who and what people are reading and buying.

Dr Orme believes that comic fandom has been de-stigmatised thanks to the exploding popularity of superhero films and television shows, but that nonetheless society is still been more accepting of male fans.

But female comic lovers still face two substantial stigmas, according to Dr Orme: firstly, that comics are “junk” entertainment, and – from male fans – that comic fangirls are fake.

The reflections of some of the women in the Melbourne club echo her theory. “I don’t think I would go to the club at all if it wasn’t a women specific club,” fangirl Angie says.

She’s had her credentials as a “real” fan questioned by “gatekeeper” fanboys to the extent that she just stopped engaging with them.

Dr Orme has found in her research that plenty of women feel the need to remain “closeted” about their fandom to fanboys or/and non-comic fans, because of these stigmas.

When being asked about what she sees for the future of comic fandom, Dr Orme says: “I think we can never say there will be an end to the gender stereotyping of comics fans, we would have seen a drastic change of our general outlook on gender roles. And it’s happening. But it’s a gradual process.”

In the last two seasons of The Big Bang Theory Stuart, the owner of a comic store, hired the first female assistant, Denise. When Sheldon tried to challenge her and asked her to recommend comics without telling her what he likes, Denise surprised him with her comic knowledge.

“Well, you’re wearing a Green Lantern shirt so I am guessing you’re a DC fan. Although that’s from the Allen Scott era so you’re probably not super into the current run,” Denise observes. “How would you feel about an alternate history where the World War I was fought with dragons and magic?” He’s clearly impressed.

“That’s what I wanted the theme of my 10th birthday party to be!”