Although a long way from home, students from Hong Kong are finding each other and protesting in Australian cities in solidarity with their family and friends at home. Wing Kuang reports. 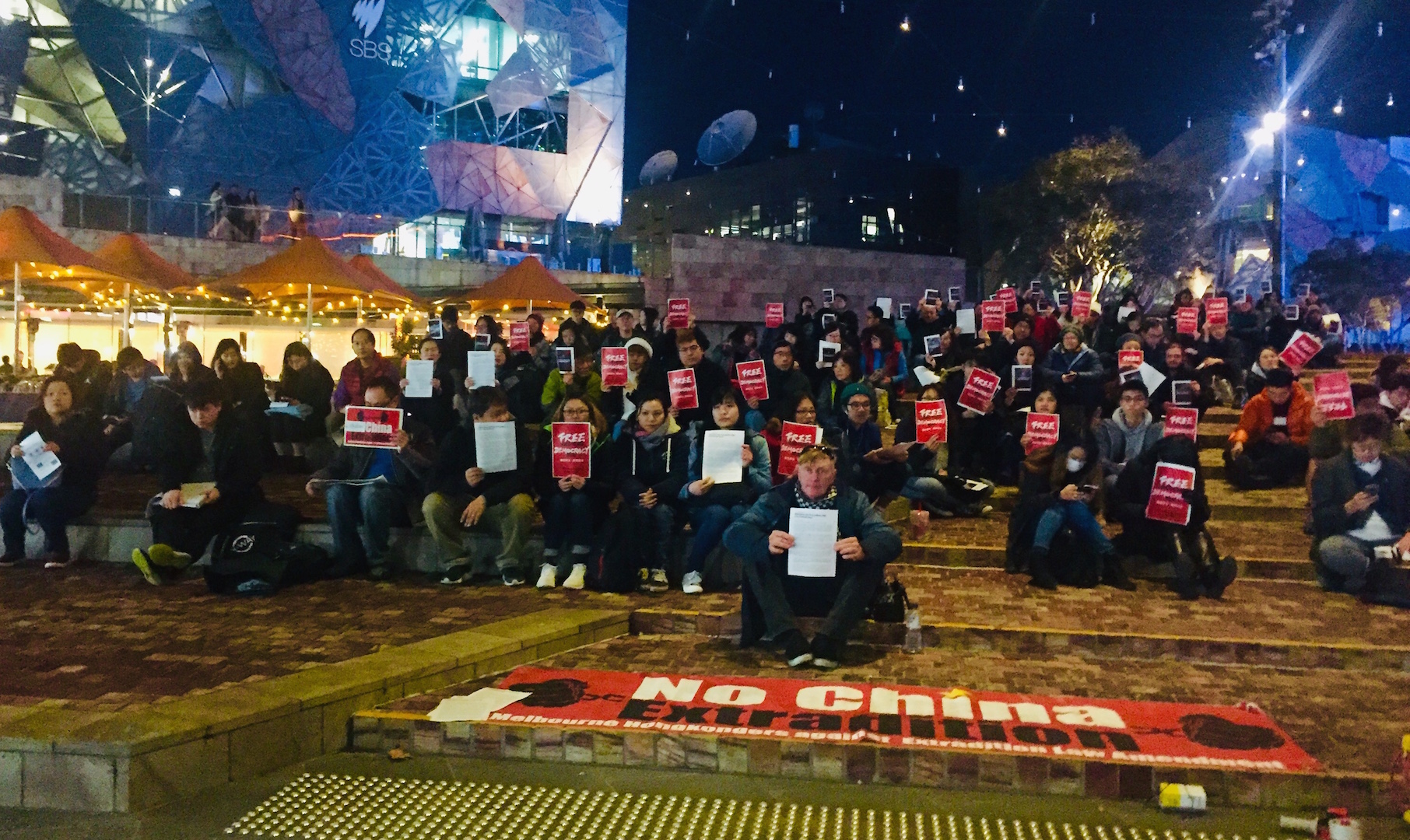 Words and pictures by Wing Kuang

In the aftermath of June 9, when an estimated one million protestors poured onto the streets of Hong Kong, four students from that city a long way from home took placards into downtown Perth in solidarity with their friends and family back home.

Their signs protested the bill that had ignited the Hong Kong uprising making headlines around the world and which would allow, for the first time, extraditions of citizens accused of crimes to mainland China for trial.

Sherene Nee, another Hongkonger studying in Perth, happened across the pair and joined them. Together they heard the news that back home police had opened fire on the protestors with tear gas and rubber bullets. They set up WhatsApp and Facebook callouts and by the next day, June 13, there were 150 or so of them gathered together with their signs, clad in black like the protestors at home. Since then, they’ve organised several more gatherings, including on the eve of the G20 Summit last week, when Nee sat outside the elegant sandstone building of the Western Australian Parliament holding a red poster declaring “NO CHINA EXTRADITION”. There were rumours, later reported on the SBS Cantonese service, that there were officials from the Chinese consulate taking photographs of the protestors.

On the same day in Sydney, Melbourne, Brisbane and Adelaide, hundreds of other Hong Kong students also gathered together in protests having found each other in similarly spontaneous ways through social media and networks.

There are presently more than 12,500 students from Hong Kong studying at various institutions around Australia, and the ongoing political turmoil in Hong Kong has galvanised actions and new connections between them. Many of those spurred to organise local protests say they didn’t know each other until the campaign at home broke out.

It’s a reflection of the kind of the organic, largely leaderless movement that underwrote the wave of Hong Kong protests.

“And even though we are not at home, we still need to support, because home is home.”

Hoho Yin, 23, joined Nee’s group in Perth after attending the second event there, which attracted more than 500 participants. Although they had not met previously, the pair shared a formative moment of activism. Both former student union members in Hong Kong, Nee and Yin participated in the so-called Umbrella Movement in 2014, when tens of thousands of Hong Kong residents rallied against Beijing demanding “true universal suffrage” and claiming China had reneged on an agreement to grant them open elections by 2017.

For other students, this was their first time on the streets. “I was in Year 9 when the Umbrella Movement took place, and at that time I was a bit apolitical,” recalls Jessica*, now 19. After the first massive protest broke out in Hong Kong, she co-founded the Melbourne Hong Kong Student Public Affairs Society (Melbourne HK), a group formed by students from eight Victorian universities to organise and promote the anti-extradition campaign.

“I saw the senior students in my school (during the Umbrella Movement) still come out to the street even if they were busy with university entrance exams, or hang banners in their classroom,” Jessica explains.

Elsewhere around Australia, other Hong Kong students were feeling similarly energised. Phoebe Fan, 22, and Christy Leung, 21, became co-founders of Brisbane International Student Solidarity with Hong Kong Facebook page. Apart from organising some local protests, they also compiled a booklet with 160 messages from Brisbane Hongkongers and sent it to the office of the Hong Kong Chief Executive Carrie Lam. Fan and Leung say they have little experience as organisers. They’ve had to figure it out on the run.  “When we started the planning, I realised there were more that need to be considered,” explains Fan.

One issue all the students say they struggle with is finding the right tone and message to share with Australians. While they’ve enjoyed support from many Australians, it also becomes clear to them that many Australians have little understanding of the central tensions and the relationship and distinctions between Hong Kong and mainland China.

“Since I have first came to Perth, when I said I’m from Hong Kong, my teachers, my friends will talk to me in Mandarin –  ‘nihao’ (hello),” says Nee. “And I was like, no, that’s not my first language. I speak Cantonese.

“[I need to explain] that Hong Kong is not part of China, and we are under ‘one country two systems’,” she says. “I think they don’t really understand why we can’t be extradited to China, and we then had to tell them that we actually had our own laws, our own judiciary system in Hong Kong.”

It was the fear within the population of Hong Kong of the fundamental alteration of that model that inspired Hongkongers, both at home and overseas, to take to the streets and go on strike over the past month, explains Professor Caitlin Byrne, director of the Griffith Asia Institute.

“People are aware this goes to the heart of the Basic Law (of the Hong Kong Special Administrative Region), that if the extradition bill were passed, it would not only enable the extradition of Hongkongers to China on a range of criminal offences, but also finance,” says Byrne.

On 16 June, Hong Kong Chief Executive Carrie Lam issued a statement indefinitely postponing the extradition bill, recognising that she had misread the public mood, but stopping short of an apology. Byrne argues this has encouraged more people to come out and join the uprising.

There are also signs that this and other protests in recent years are evolving new, broader dimensions beyond the events that trigger them, observes Victor Yim, a PhD candidate at the University of Melbourne’s Asia Institute with specialisation in Hong Kong democratic movement.

“Many Hong Kong people conceive Hong Kong as their ‘home’, and that’s maybe why so many of them turn out in this occasion,” says Yim. He also points out the utilisation of Hong Kong identity in political campaigns against the Hong Kong government.

“It’s hard to have an exact definition of Hong Kong identity,” says Yim. “Deep down, it is about how Hong Kong people perceive themselves vis-à-vis the others – and it happens to be the Chinese identity in the Hong Kong case.

“Such a perception is built on their understanding of the differences between the two places. It can be something like the day-to-day languages at the macro level.”

It’s the view of many young people that “the political space in Hong Kong has been largely squeezed out by the Chinese government, the ‘One Country, Two Systems’ principle in their perspective is quite shaky at this moment”, says Yim.

“And the youngsters were so afraid that the Hong Kong identity will be totally wiped out by the intervention from Chinese government. So they choose to come out to protest.”

Last week,  the University of Hong Kong released its annual survey on identity, conducted after the second massive protest on June 16. It showed that over half of 1,015 respondents had negative views regarding Beijing’s policies on Hong Kong. It also showed 90 percent of 150 respondents aged 18 to 29 didn’t feel proud of being a citizen of the People’s Republic of China.

During their protests in Australia, many student organisers have encountered Taiwanese and mainland Chinese, and are reporting varied reactions from them.

Joe*, a 20-year-old co-founder of the Melbourne HK group, says a group of Taiwanese students brought a supply of milk tea to protestors after joining their two-hour silence stance event on Swanston Street on June 16. He also observed mainlanders observing them from the fringes, plainly curious, but few of them initiating conversations.

But not all mainlanders are so indifferent to what is happening in Hong Kong. Yin recalls  a recent conversation with two mainland students about the anti-extradition bill protests during a break in classes at Melbourne.

One of them described Hong Kong and China as family, and accused Hongkongers of being unwilling to accept offers of help from Beijing. But another student backed the Hong Kong protestors, saying they were just defending their values of democracy and freedom, things that mainlanders didn’t have.

Even in Australia, there are concerns within Hong Kong student circles that political activism may not be without risks. Last week, the pro-democracy outlet Apple Daily reported a returning Hong Kong student  who had been involved with an anti-extradition protest in Melbourne was stopped and questioned by Hong Kong Police when walking in Hong Kong airport. Police denied the incident.

But the report stirred the Melbourne Hong Kong protest group to share guidelines to help students who might encounter similar issues. Jessica says one student organiser burst into tears because of the news. “She felt powerless and frustrated, as she felt it became common for the police to abuse their power, and Hong Kong is getting worse.”

Still, she and other protestors explain that regardless of the risk, young Hongkongers were feeling determined to fight for Hong Kong, and to defend democratic values.

“I will tell myself and overseas Hongkongers, even though we are not in Hong Kong, we have no excuse to avoid (the discussion of the extradition bill),” says Leung, one of the Brisbane organisers.

“Because we all own Hong Kong.”

*Some interviewees wished to remain anonymous.