From Port Phillip Bay to the Coral Sea, tracking the travels of the eels

Little is known about the epic annual 3000 kilometre migration of Australia’s short-finned eels. But with their northern hemisphere cousins in trouble, scientists are on the trail of these ancient, elusive creatures in an effort to determine what can be done to safeguard their future. Angus Thomson reports. 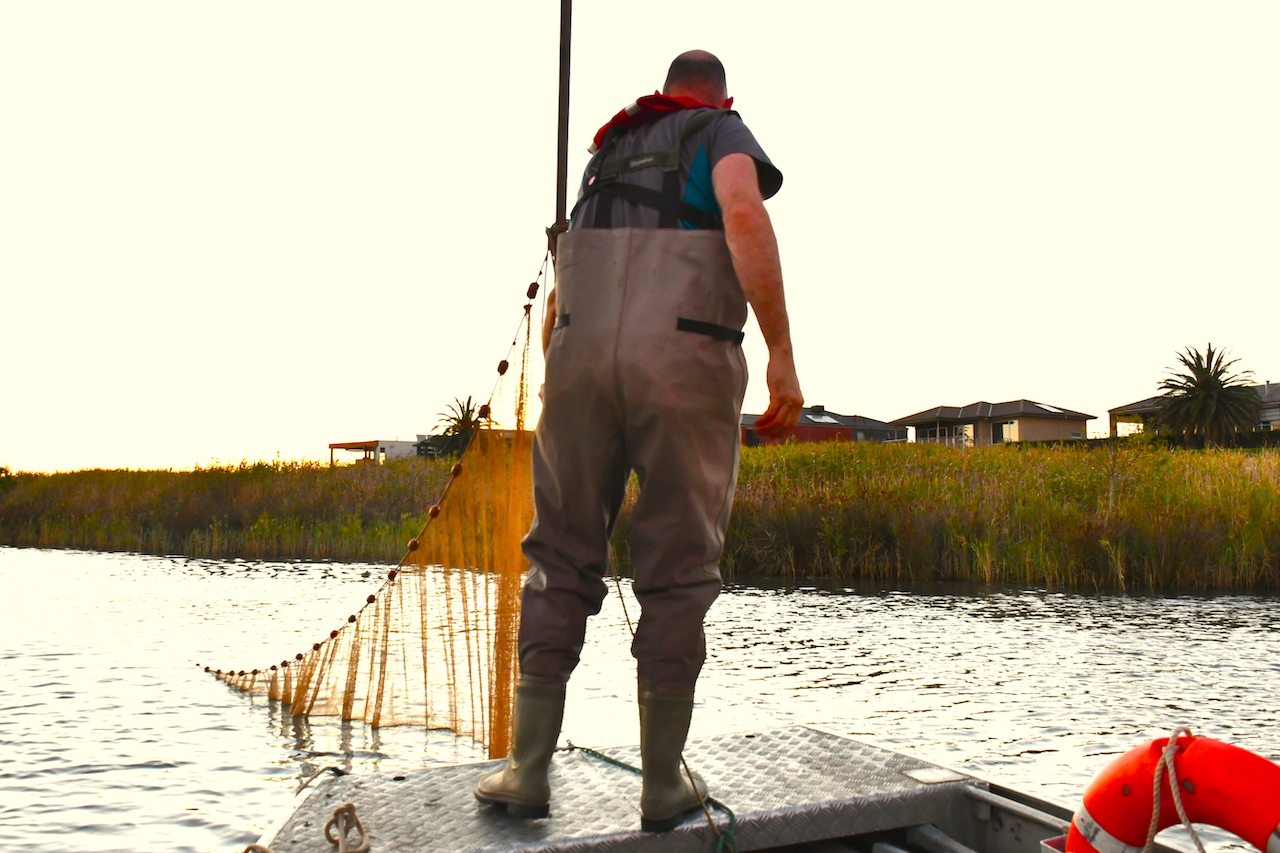 David Dawson (pictured), Wayne Koster and their colleagues at the Arthur Rylah Institute hope that their work using tagging technology to track eels will help efforts to support the population. Photo: Angus Thomson

Story and pictures by Angus Thomson

In a narrow culvert carrying water under the busy Mornington Peninsula Freeway in Melbourne’s east, away from the eyes of curious anglers and passing motorists on their evening commute home, David Dawson is setting a trap.

Meanwhile his accomplice, biologist Dr Wayne Koster, is preparing for a slippery catch.

“These days, we make sure we’ve got a good solid bucket lid with snap clips on it so they can’t poke their way out.” 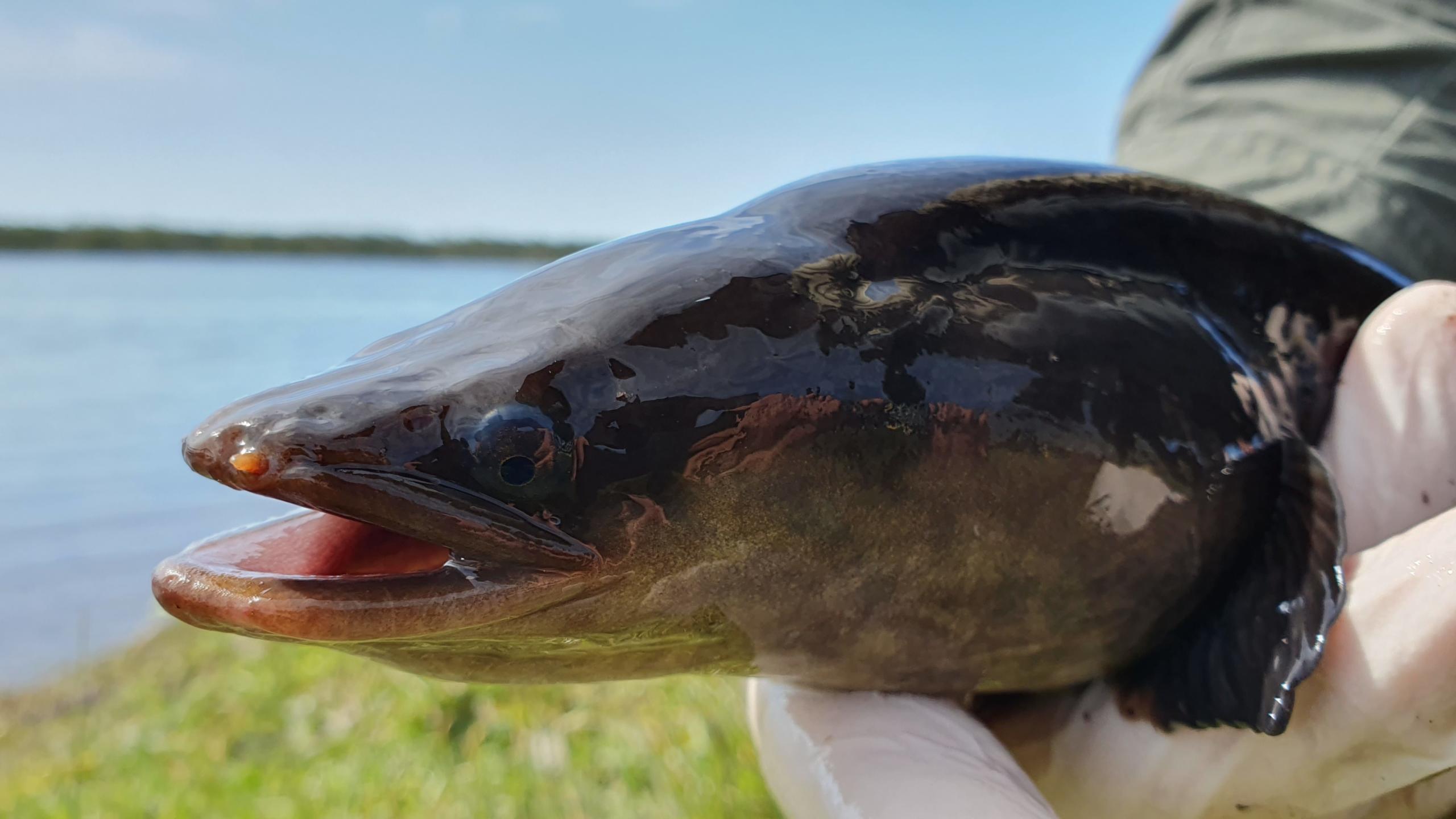 Dawson and Koster are researchers from the Arthur Rylah Institute for Environmental Research based in Heidelberg. Their mission is to catch and tag short-finned eels (Anguilla australis), or silver eels as they are sometimes known, on their final journey back to the spawning grounds where they were born – some 3,000 kilometres away in the Coral Sea.

The research aims to shed light on where these eels go to spawn and what happens to them along the way. The migration patterns of the short-finned eel have attracted little research until now, but even less is known about the impact humans are having on their life cycle.

Koster, a specialist in native fish ecology and conservation, grew up catching eels with his father on the Woori Yallock creek in the upper Yarra catchment. His interest in these elusive creatures grew at a conference in the Netherlands about five years ago where he saw research into the alarming decline in numbers of European eel (Anguilla anguilla) across the northern hemisphere.

He noticed there was comparatively little research into their cousins in the southern hemisphere.

“They’re a forgotten animal,” he says.

“[I thought] it’s about time we took a closer look at how eel populations are here.”

As the sun goes down, the traps are set, and all there is to do is wait. A crescent moon hangs in the night sky, providing the dim lighting Koster says the eels prefer to move around in. 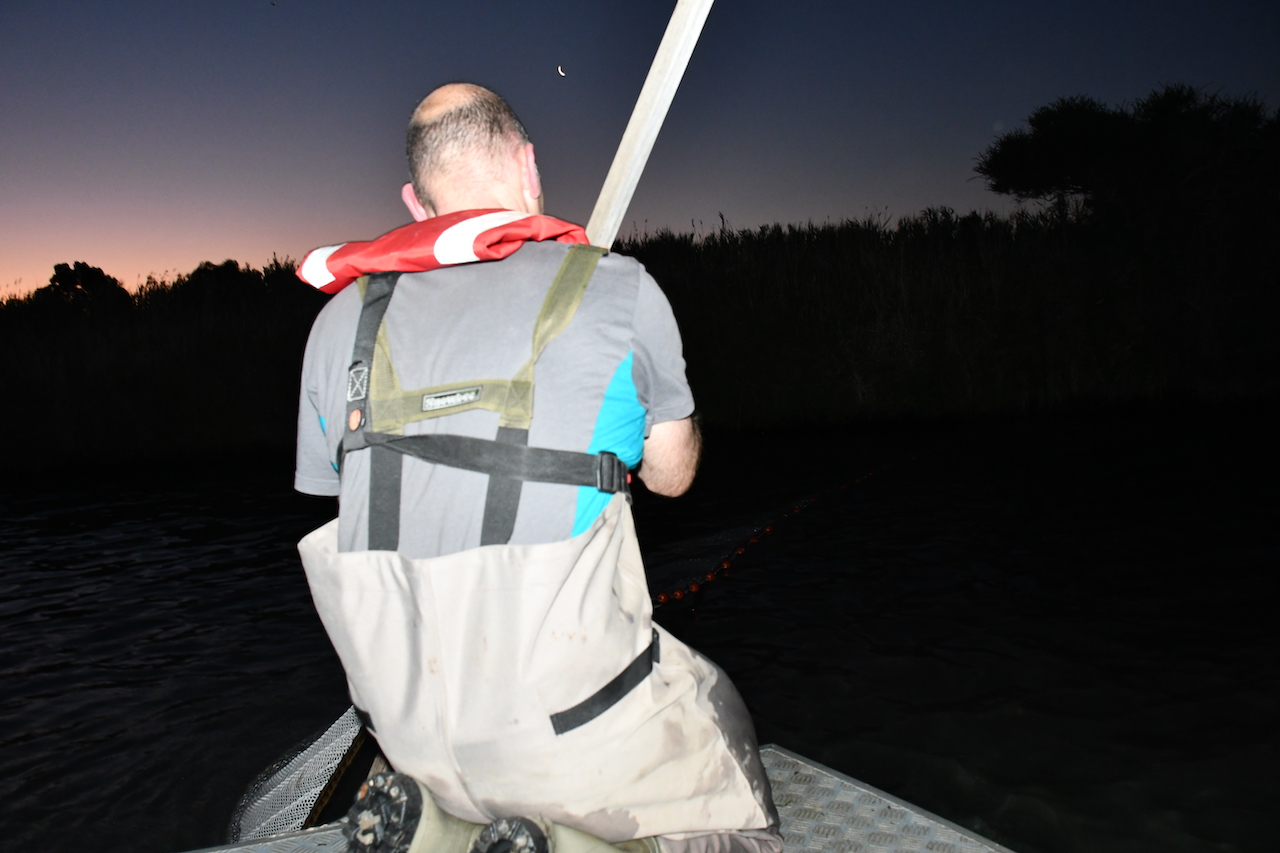 Although much remains unknown about how Australia’s short-finned eels are faring, in 2018 the species was placed on the International Union for the Conservation of Nature (IUCN) ‘Red List’ of near-threatened species.

Koster and his colleagues hope that their work using tagging technology to track eels will help efforts to support the population. Although COVID restrictions derailed their fieldwork plans for 2020, as they did to innumerable similar research efforts worldwide, the work is throwing new light on the obstacles and threats these mysterious creatures face throughout their life cycle.

Work Koster has done investigating how river levels affect eel migration, particularly around the site of the 6500-year-old Budj Bim eel traps in Western Victoria, will help governments make decisions about how water is allocated for environmental uses, he says.

“Understanding basic elements of their ecology is critical to being able to better manage them.”

The Budj Bim cultural landscape was added to the UNESCO World Heritage list in 2019, and Koster argues the cultural significance of eels to First Nations people is just as important as their ecological significance.

“They play a role in freshwater ecosystems, but they’re also highly significant to indigenous people all over the world.” 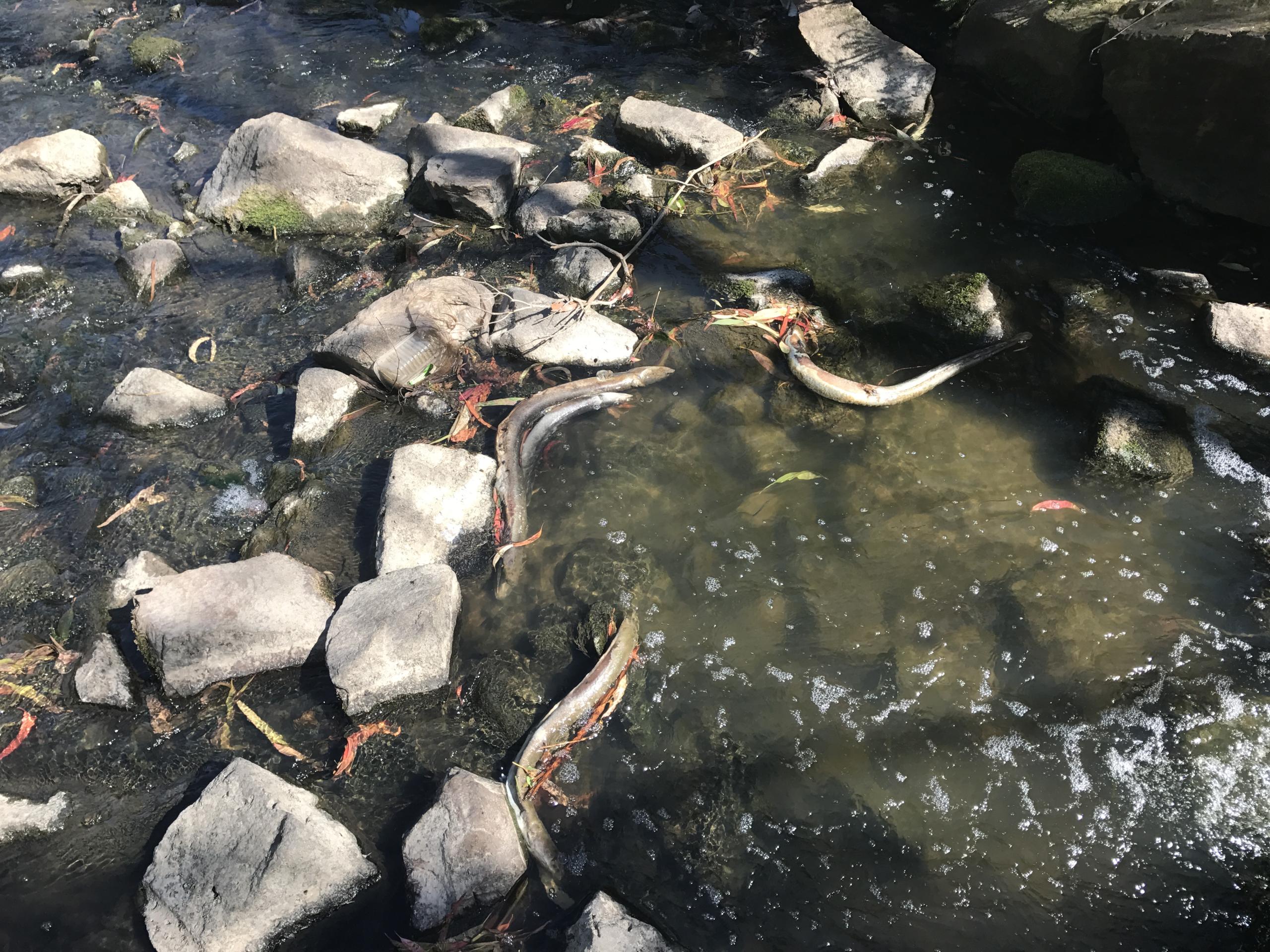 Artificial barriers such as dams and weirs are “one of the biggest threats to eels”, says Wayne Koster. Photo: Arthur Rylah Institute

Despite the work by Koster and others in recent years, the question of how short-finned eel populations are faring remains uncertain.

“We don’t have a great handle on how they’re tracking or trending – there’s no dedicated monitoring programs to check the status of eels populations,” he says.

What we do know is that because eels are diadromous, meaning they need to move between salt and fresh water to complete their life cycle, urbanisation looms as an escalating threat to their survival.

Artificial barriers such as dams and weirs are “one of the biggest threats to eels”, says Koster, stopping not just the migration of the eels out to sea, but also the millions of larvae they spawn finding their way to freshwater, where they can live for decades before starting the cycle over.

The toxic pollution that comes alongside heavy urbanisation has also had devastating consequences for eels only a few kilometres upstream from where Koster and Dawson are setting their nets.

Anthony Bigelow, the president of First Friends of Dandenong Creek, witnessed a “horrendous” fish kill on Melbourne Cup week in 2017 caused by chemical pollution from an industrial estate upstream.

“If you inadvertently splashed yourself with the water you got an instant burning sensation on your skin that week,” he recalls. 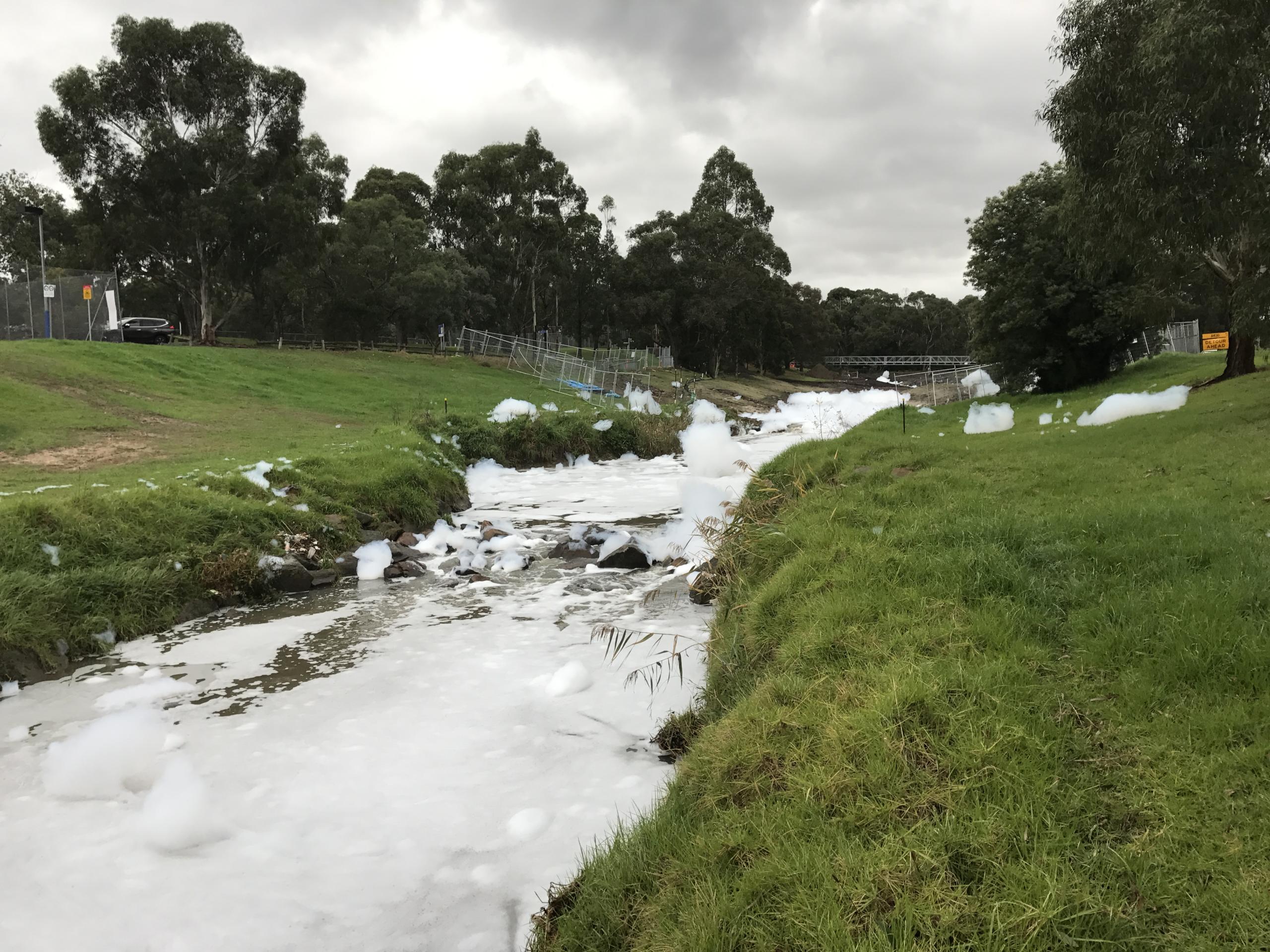 Pollution also has devastating consequences for eels. This photograph shows a major pollution event in 2017 just a short distance from one of the sites being monitored. (Supplied.)

Footage from the day shows chemical foam blowing off the surface and its devastating effect on the creek’s inhabitants. Ten truckloads of dead fish and eels were collected by Melbourne Water, according to Bigelow.

Household chemicals such as popular insecticides and pest-killing sprays can be silent killers of aquatic species, even if you don’t see “dead eels floating in the creek”, says Steve Marshall, head scientist at Bio2Lab.

He says eels are particularly affected by lingering chemicals in the environment because they are so long-lived, with certain chemicals building up in their fat and potentially impacting their ability to grow, migrate and breed.

Bigelow says the health of Melbourne’s creeks will continue to suffer until local authorities do more to educate the public about the consequences of household insecticides once they reach the stormwater system and eventually urban waterways.

Koster hopes his ongoing research will draw attention to the ecological and cultural importance of eels – even if they aren’t as “cute and cuddly” as other Australian species.

“In the case of eels, and fish in general, because they’re underwater, they don’t quite get the attention they might deserve.”

But eel tracking can be both a “hugely exciting” and nerve-wracking exercise – especially when the tags are worth thousands of dollars each.

Koster says many of the eels he’s tagged never reach the Coral Sea, ending up a “tasty snack” for marine predators such as sharks and whales.

Making it all the more exciting when one does get close to their suspected spawning grounds. 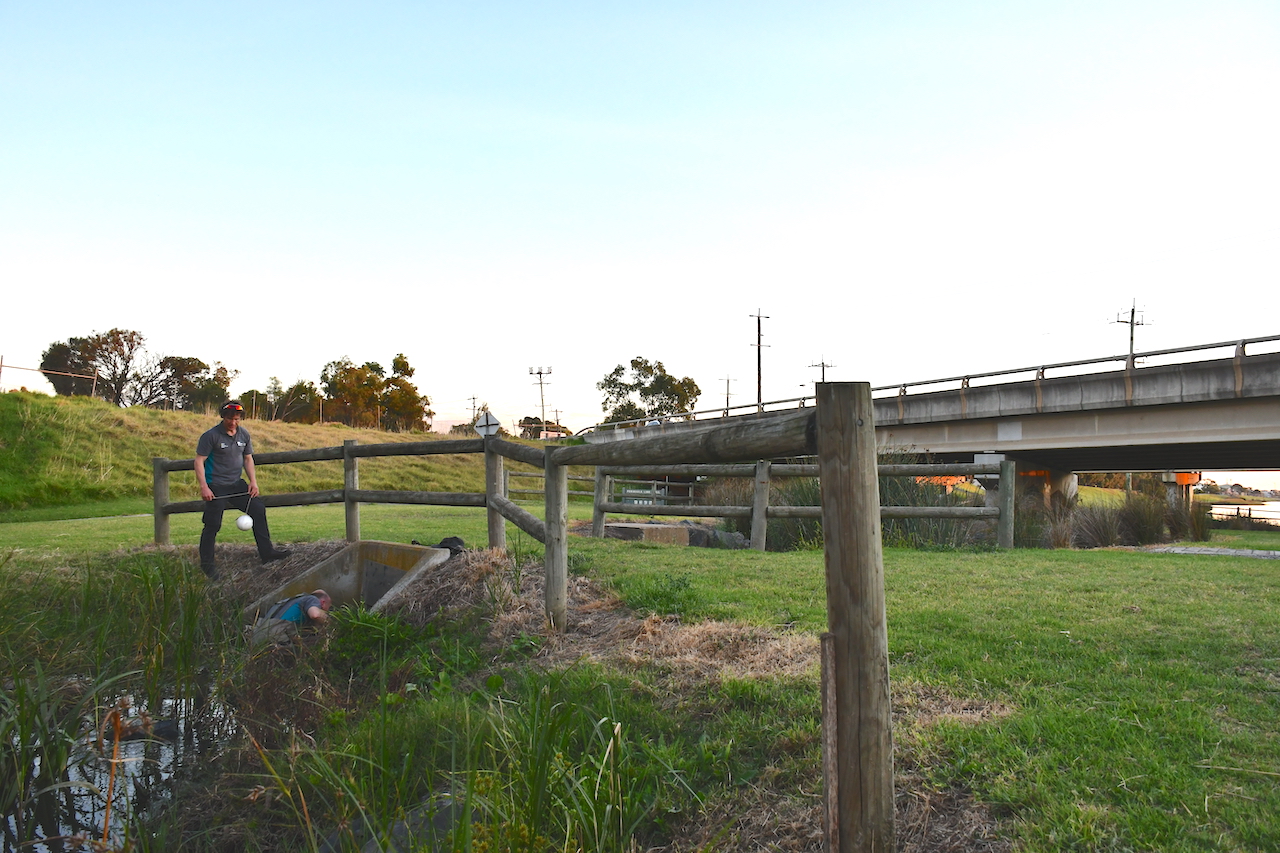 Tagging and tracking eels, using technology worth thousands of dollars for each unit, will hopefully fill gaps in knowledge about the health of Australia’s short-finned eel populations. Wayne Koster (left) and David Dawson search out specimens just metres from the Mornington Peninsula freeway. Photo: Angus Thomson. Minus his beer goggles, one man ventures deep into lager land