Ditch the emotional baggage – but buy the ($35) bag

Pricey and corporate or an authoritative and intellectual voice in the self-help market? Claire Capel-Stanley examines the attraction of the School of Life 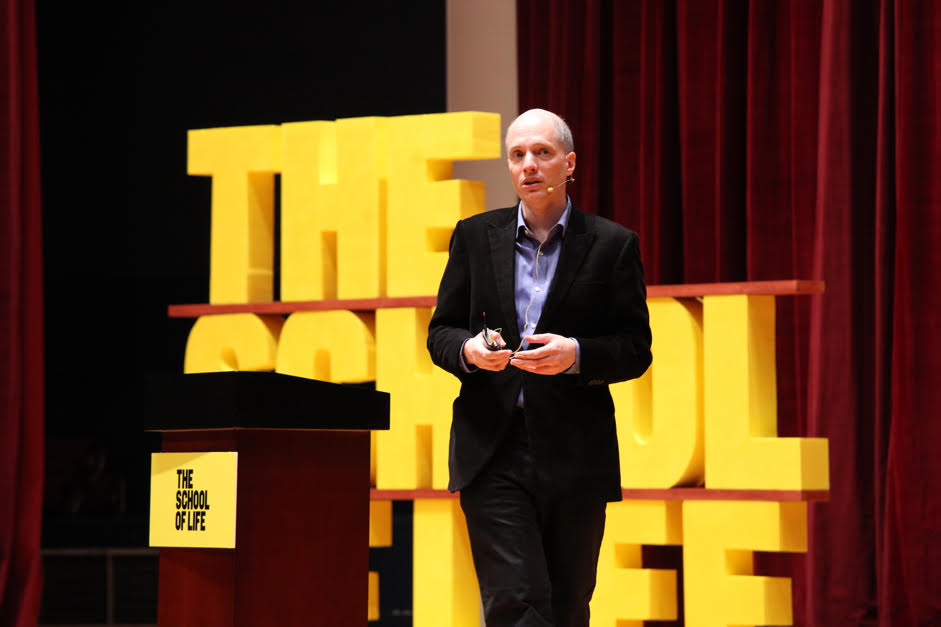 It’s a dismal Wednesday evening in Melbourne’s CBD. Inside a bookshop across the rain-splattered road from Southern Cross Station, a group of adults clutching notebooks and steaming mugs of rooibos and vanilla tea is being taken through a PowerPoint presentation.

Tonight’s topic is confidence. It starts with a challenge to drop your guard and groove to ABBA’s Dancing Queen. It ends with heartfelt personal pledges: to foster world peace, pursue knowledge and, for one student, end all religion. Welcome to The School of Life, a global organisation “dedicated to developing emotional intelligence”.

Headed by Swiss-born British author Alain de Botton, the Melbourne outpost is one of eleven “schools” in cool capitals like Antwerp, Berlin an d Sao Paolo.

With a fresh North American distribution deal for its line of books and merchandise, two big-ticket conferences on the West Coast, and workshops in New York, the School of Life is testing the waters in the gigantic US self-help market. Analysts say “personal growth” is worth $US12 billion per year, and the global social enterprise is gearing up for a slice of the pie.

A slicker offering in the self-help market (which London co-founder Sophie Howarth described as being “terribly dowdy”), its teachings cover all the traditional territory, broken down into “how to” morsels with grabs from canonical writers and philosophers.

The School of Life’s following has exploded since launching in a Bloomsbury basement in 2008. By 2017, de Botton estimated 100,000 people had attended its courses and events.

“It’s the thing I’m proudest to have done in my life,” he said then in an interview, “we have created a brand in an area that used to be totally unbranded.”

And a brand it is. A Google Image search for “School of Life” turns up pages of its block yellow logo.

Lessons from the newly-standardised “core curriculum,” developed by de Botton and taught by “faculty,” are priced between $90 and $250 each. But the brand’s engine is free social media content.

A YouTube channel churns out two videos per week for 4 million subscribers. A new app by Google’s Campus London prompts a community of followers to navel-gaze over “conversation starters”. And there’s a handy portal to the online shop, with a product range of 130 items, including the “Stay or Leave?” relationships card game and “Emotional Baggage” tote bag.

While the fanbase has grown, Camilla, who has volunteered for the Melbourne branch for over two years, says the founder’s style might be falling out of step with its audience.

“He can be a bit archaic, a bit nuclear family, and it’s all very Western. Western art history, Western philosophy. There’s nothing else,” she says. “And the problem is, it’s just not that relevant.

“He has his own way of doing things, and the Melbourne School of Life wants it to be a space for everyone.”

The son of Gilbert de Botton, famous for his approach to investing for the ultra-rich, Alain completed an MA in philosophy at Cambridge.

At 23, he abandoned a PhD at Harvard, and went on to write bestsellers for the general public. His first book, Essays in Love, sold two million copies. His trust fund is reported to be over £200 million, and in 2014, the Financial Times wrote that his own “empire” was worth £7 million.

De Botton is no stranger to criticism. Some of the sharpest barbs have been hurled from the US. In 2013, New Republic described him as a “pseudo-intellectual”. Lisa Levy wrote in the LA Review of Books that the “ersatz, if not quite fraudulent” de Botton “often seems like a grad student who shows up to a seminar having done just enough of the reading to participate”.

In 2009, New York Times reviewer Caleb Crain wrote that de Botton’s book The Pleasures and Sorrows of Work was diminished by “mean-spiritedness” and “mockery” towards working-class people. De Botton attacked the reviewer, saying Crain had “killed” his book in the States.

“I will hate you till the day I die,” he wrote on Crain’s blog, “and wish you nothing but ill will in every career move you make.

“I will be watching with interest and schadenfreude.”

But intellectual enemies like these are unlikely to hamper the brand’s ascent. In the personality-driven self-help market, consumers like Chloe Walker are willing to pay “thousands of dollars” for voices that resonate.

As self-help boomed online, coinciding with the tech bubble and the GFC, Walker was drawn into a “weird” economy of niche followings and high price points. She still pays an annual subscription between $400 and $1000 for access to Havi Brooks’ online forum The Fluent Self.

“I kind of got a sense of which were the good ones and which were full of shit,” she says. But there’s no winning formula. “It’s basically the same thing over and over again. It just depends whose voice you connect with,” she says. Walker has tried de Botton’s books, but found them patronising. “I couldn’t finish them,” she says.

De Botton has never shied away from his commercial aims, calling for “radically expanding” capitalist enterprise to the realm of emotion.

In a speech to business leaders last year, he said the global economy depended on an “assault” on areas like “love and belonging, esteem and self-actualisation”.

“Only in the last five minutes have we found that there is very great money to be made in friendship.” Facebook, he said, was just the beginning.

It’s not business nous, but socially switched-on branding that has enabled the company to expand over the past decade.

A self-described social enterprise, the company has reduced rental overheads and enlisted scores of volunteers by partnering with ethical organisations. The Melbourne CBD location is valued at $18 million and provided by the Ethical Property Commercial Fund. Capital was put forward by partner Small Giants, a “positive social and environmental impact” investment group.

Though it relies on social impact investing, the company’s balance sheets and social benefits remain mysterious. The School of Life has obtained a B Corporation certification, meaning it “voluntarily holds itself to higher standards of transparency,” but publishes no information about its governance or measured social impacts. In the US, where B-Corps like clothing giant Patagonia have set the bar for accountability, the School of Life has not published any detail on its social impact.

The business itself is registered to a discretionary trust, and though expanding across the world, the chain has not incorporated. When contacted for an interview, the company declined multiple opportunities to answer questions.

Lack of clear definition on what constitutes “social good” is a growing cause for concern in the social enterprise sector, UK academic Allan Kay wrote in Pro Bono Australia.

“Private businesses can self-declare themselves as social enterprises while their trading surplus finds its way eventually into the pockets of its owners,” he wrote.

There is no way to tell whether the School of Life sits in this category. But the product has more in common with self-help entrepreneurs like Tony Robbins than social enterprises like its Melbourne neighbour, Streat, which employs disadvantaged young people. 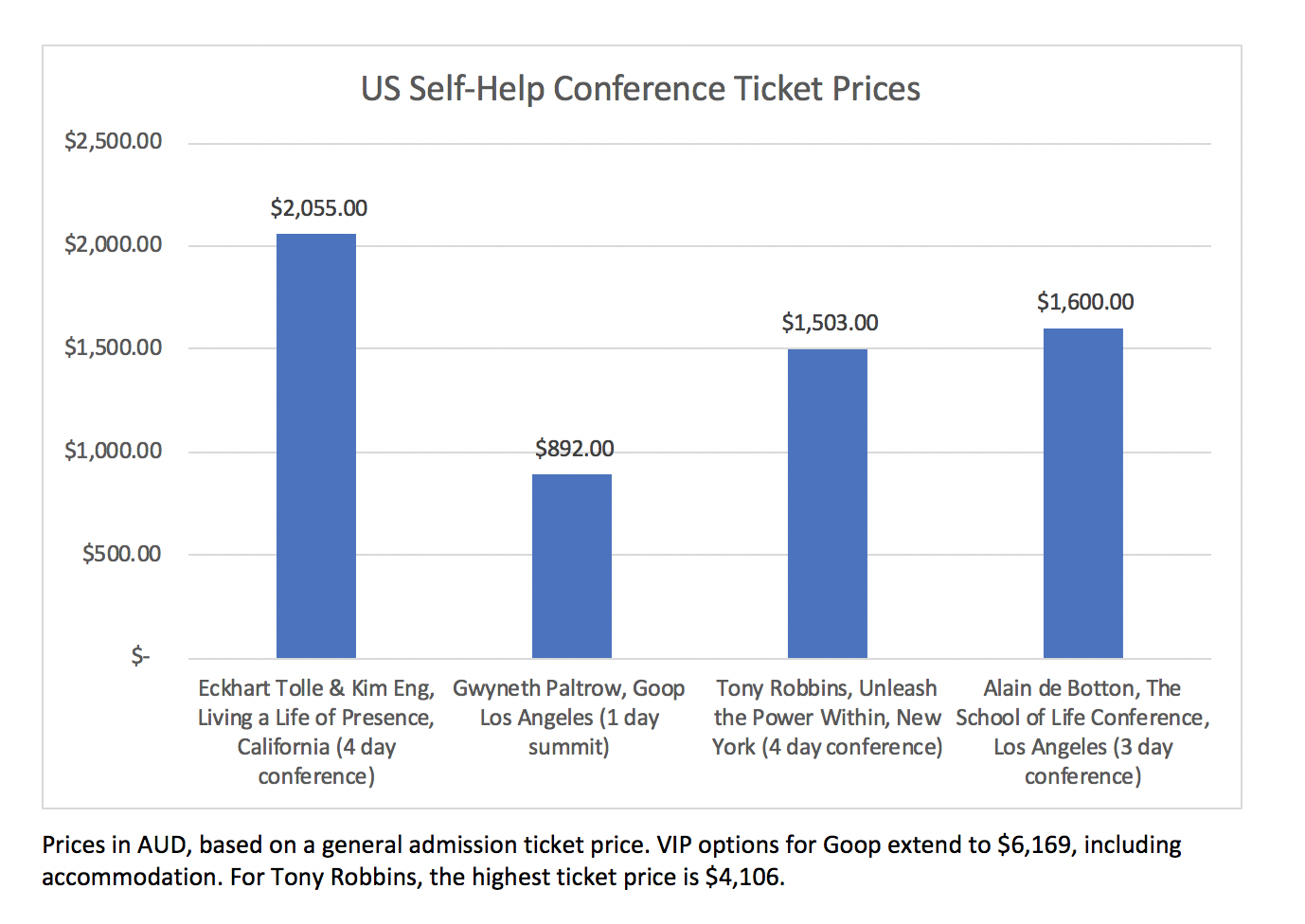 The school has long struggled to acknowledge its blind spots. Its most-watched video is Why Some Countries are Poor and Others are Rich, arguing that poor African nations miss out on wealth due to a combination of their governments’ corruption, the weather and flies. The school turned off commenting and posted a message rebuking people saying they had “forgotten about colonialism.”

“We are very aware of colonialism,” it reads, “but didn’t, on this occasion, give this factor a central role.”

But the therapeutic claims could be “misleading,” according to Claire Garratt, a psychologist who works in public mental health.

“On the one hand, if people have the means and they’re just interested in trying it out, then that’s not a concern,” she said, but “if in some ways if it is trying to play to more vulnerable people, and give the sense of having all-knowing answers, then I think that has the potential to be a bit exploitative,” she said.

High price points for vague promises are in line with what the self-help giants can command in the US. But it remains to be seen if acolytes will be willing to pay for lessons from the self-help sophist, whose social mission seems to lie in the eye of the beholder.