Dear Federal Politics, it’s not me, it’s you. Signed, Disillusioned of Deakin

Voters are weary of instability in Canberra and disappointed in the lack of political boldness and vision from the major parties. Experts anticipate that they will make their feelings plain on polling day. Claire Capel-Stanley reports. 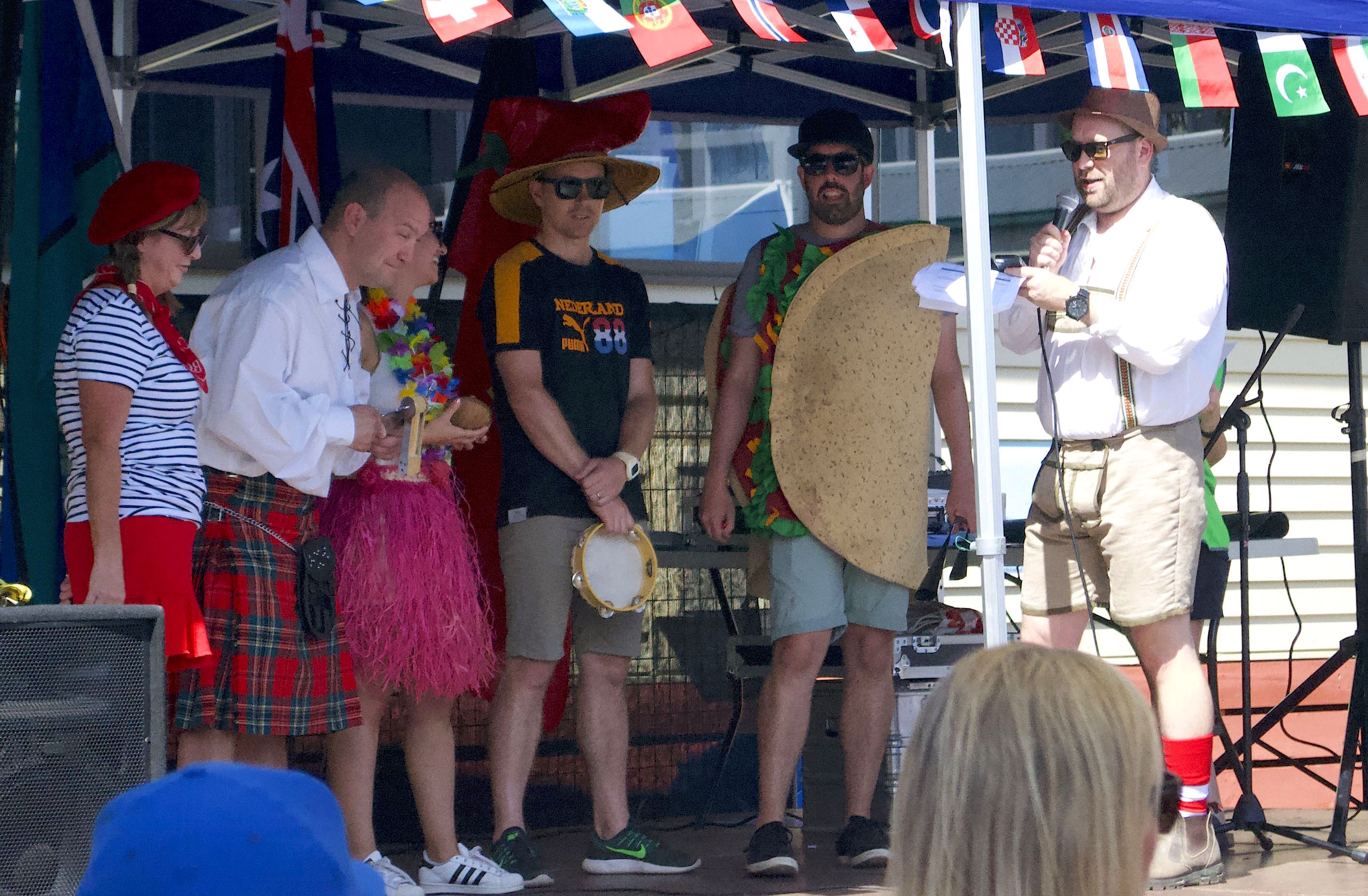 Matt Loads, right, and other parents get into the multicultural swing of things at the local school fete in Mitcham. Picture: Claire Capel-Stanley

Words and pictures by Claire Capel-Stanley

Antonio Park Primary School sits behind tall gumtrees on Whitehorse Road, the thick tendon that stretches from Ringwood, through Mitcham and Nunawading, funnelling traffic from Melbourne’s far-east into the city and home again.

The theme for this year’s fete celebrates multiculturalism, which goes some way to explaining why Mitcham dad Matt Loads is dressed in lederhosen as he steps up to MC the festivities.

The Deakin electorate is as close to Neighbours-style suburbia as still exists in Melbourne. Indeed, the location for the enduring soap is only a short drive away. Incomes are a little above the national average. A quarter-acre block can still be had for under $1 million – if you’re lucky. You can buy renovation equipment, get an Aussie home loan, have your dog washed and pick the kids up from school without veering off the one long, busy, mega-barn lined artery.

Until not so long ago, this part of the world was considered fairly  safe territory for the Liberal incumbent, Michael Sukkar, who holds it by  a 6.4 per cent margin. And yet, it’s not.

An opinion poll published this week by the Herald Sun shows a swing to Labor of more than five per cent in the campaign’s final week, shaving the Liberal lead down to 51 per cent on a two-party preferred basis.

Here in middle Australia, when a team of Citizen reporters hit the streets collecting the opinions and insights of ordinary folk, the collateral damage of years of political infighting, negativity and a dearth of vision quickly became clear. Voters say they are tired of the instability in Canberra. Experts say the historic reluctance of both major parties to put forward grand blueprints for the nation is fuelling disillusionment and may factor into votes on polling day.

Asked for his opinion on the state of politics Loads – who describes himself politically as “hard left”, and doesn’t pull any punches –  says he sees Prime Minister Scott Morrison as “a substitute teacher. They’re just coming in and covering the bases because someone else is away”.

Speaking during an event in Deakin in April, the Prime Minister refused to address questions on Sukkar’s role in the leadership turmoil, describing it as a “[Canberra] bubble question.”

But for Loads, and for several other locals  The Citizen spoke to, it is an issue – not so much around the chaos of the coup itself, rather the policy inertia that has accompanied it.

A level crossing was removed at nearby Heatherdale Road, something that has made a tangible difference to many people’s daily lives. It’s notable that the Liberal primary vote in this area fell by four percentage points at the state election, when the Liberals’ Dee Ryall was turfed in favour of Labor candidate Dustin Halse.

At the federal level, Loads says the sense of unending “caretaker mode” has been palpable.

“Nothing’s happening,” he says. “Since Scott Morrison got into power, it just feels like it’s been a slow lead-up to the election.”

Dr Jill Sheppard, an expert in political behaviour at the Australian National University, says that negative political messaging, which has long been a feature of campaigning season, is especially on the nose with voters right now.

“None of the parties are very good,” says Thang Nguyen, “I just look for the one that’s the least worst.”

Thang Nguyen, whose son attends Antonio Park, says he senses “a trend of racism and Islamophobia” in the Liberal party.

Nguyen describes himself as a swinging voter, but plans to vote Labor this time. “None of the parties are very good,” he says, “I just look for the one that’s the least worst.”

His view exemplifies what Sheppard describes as Australian voters’ propensity to punish, rather than reward, at the ballot box.

“In Australia, where we have two major parties that are very similar, when we do decide to change our vote, it’s not often for a positive reason. It’s often because one party has really disappointed us.”

Sheppard says the negative campaigning has been inflamed by a lack of vision. “It’s easy to see how voters are probably sick of just hearing the same kind of negative campaigns but without any of the positives that we used to hear.”

Though often pegged as hip-pocket voters, there’s plenty of evidence in the thoughts shared with Citizen reporters that some in the electorate have a keen interest in larger questions about Australia’s future.

Karen Smith, who lives in Mitcham, says she is leaning towards voting Labor despite the fact that she owns shares and Labor’s policy on ending dividend imputation credits won’t benefit her financially. Karen Smith, who lives in Mitcham, says she is leaning towards voting Labor despite the fact that she owns shares and Labor’s policy on ending dividend imputation credits won’t benefit her financially.

“I don’t think it’s appropriate,” she says. “That’s something that definitely needs to change I think, for the future of the country and my children.

“Similarly, I’ve got a negatively-geared investment property, but I don’t think for the country that’s a good thing.”

Some of the economic reforms on offer from Labor represent  hefty policy changes. University of Melbourne historian Dr Graham Willett says that visionary conversations have been mainly absent from politics since Kevin Rudd’s first tilt at The Lodge in 2007.

He says the plot to depose the initially popular Rudd was “the biggest blow to peoples’ trust in the Australian political system”, and the relationship has not been restored.

A Scanlon Foundation survey conducted after Scott Morrison became prime minister found 48 per cent of people surveyed believed the political system itself “needs major change” or “should be replaced.”

But politicians are not entirely to blame. Willett says that grand political vision has been hampered by a hollowing out of civic structures. Things “that once brought politics into your life”, such as trade unions, “have largely fallen away,” he says.

Even Gough Whitlam, the “obvious” big picture politician, had an agenda “generated not from within the Labor party, but from outside,” Willett says.

“A lot of this comes from society – universities, social movements – the whole push around the idea that things have to change.”

At the fete, it’s clear that people are engaged in their community, if not in politics. Parents have pitched in at every stall. Mums are microwaving orders of nachos while dads spoon sour cream on top. Flags of many nations flutter in the breeze. Signs are written in Indonesian as well as English,  so that the kids can practice the language they are learning in the classroom.

Sheppard says that faith in democracy is at a low ebb. She traces the trend against visionary politics to the 1996 election when Paul Keating was beaten resoundingly by John Howard.

“Since then, Australian politicians have been terrified of offering a grand vision for the country, because they’ve seen how voters can react to that,” she says. “They tend to play a small ball strategy.”

Australians aren’t massive fans of their politicians at the best of times, she says.

“What’s different this time around is that it seems to be turning into a lack of trust with the whole political system. That’s quite unusual for Australia.” DISPOSABLE: My life as a single-use container