The images are everywhere – doctors being heroic and stoic; tearful and angry; tireless and exhausted. The COVID-19 pandemic has allowed a glimpse into the often overlooked pressures of the medical profession. Greg Hall reports 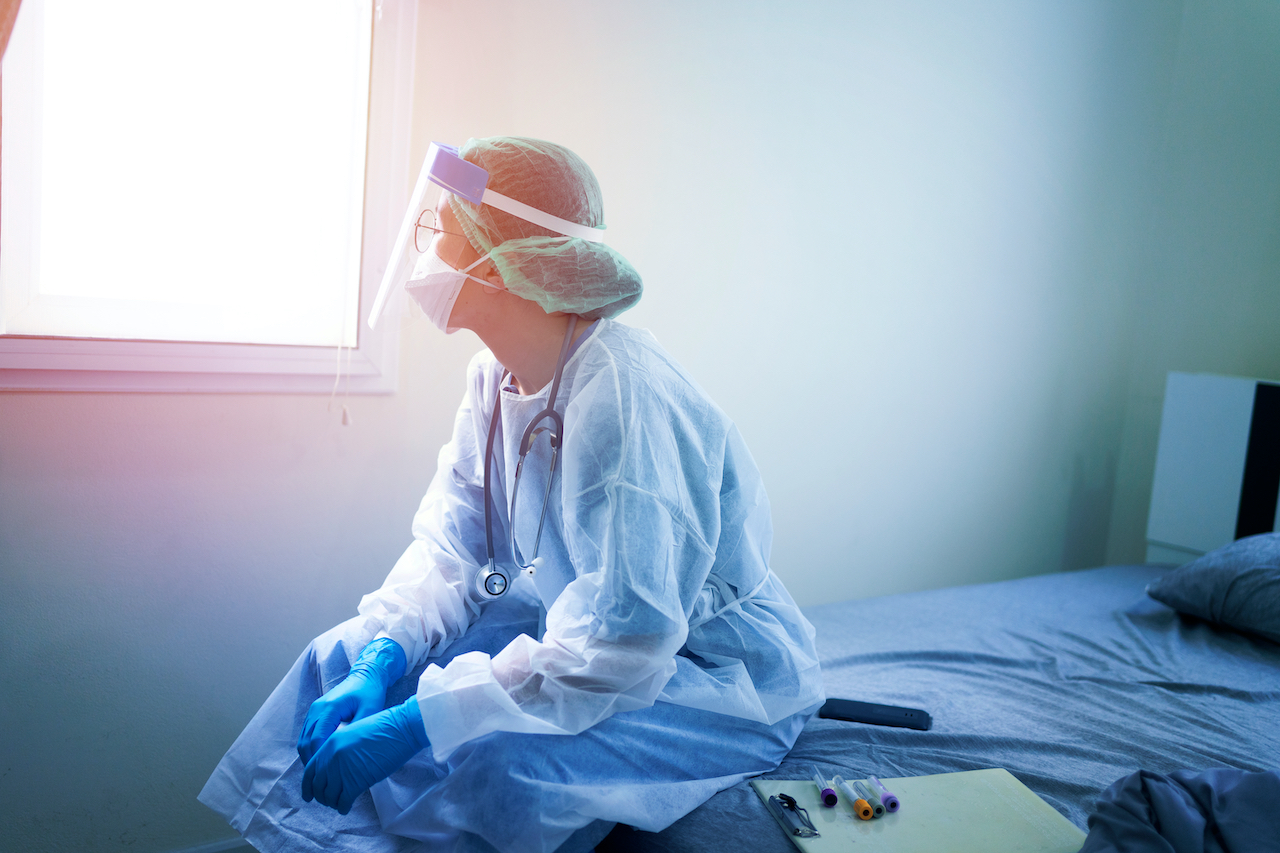 A mindset of perfectionism, together with uncertain contracts, shift work, overtime and on-call work are some of the interconnecting factors taking a toll on doctors, says Dr Choong-Siew Yong, acting director of the NSW Doctors’ Health Advisory Service. “If you work in emergency or trauma you can be called up at a moment’s notice … you can never quite relax.”

In Melbourne in 2015 four young doctors took their own lives. In Sydney, four doctors killed themselves in 2017, and another two in 2019.

Up-to-date and reliable data for suicide rates within the medical profession is hard to come by, but between 2001 and 2012, as many as 369 health professionals killed themselves in Australia.

A career in medicine would appear to promise so much –challenge, reward, purpose, fulfillment. In times of personal and communal crisis  – and humanity worldwide is in the grip of just such a moment – our appreciation of the healing professions is unequivocal. So why are so many doctors dying by suicide? “We would have rounds where we would go to a patient’s bedside and for hours and hours on end you would just be pummelled with questions that were impossibly difficult … You had to be perfect to avoid punishment”: Dr Kieran Allen. (Image supplied)

“There is a cultural problem in medicine of perfection,” says Dr Kieran Allen, a psychiatry registrar with Monash Health.

Dr Allen has his own story to tell. As a third-year medical student he came across what he describes as teaching by humiliation.

“We would have rounds where we would go to a patient’s bedside and for hours and hours on end you would just be pummelled with questions that were impossibly difficult, and it was the same thing week after week.

“You had to be perfect to avoid punishment … and so that crushed my mood,” Dr Allen said.

“Basically I ended up attempting suicide, and survived that and ended up going into hospital for a number of weeks.”

Dr Allen’s despair is not unique. A Beyond Blue study in 2013 on the mental health of doctors and medical students found that in Australia nearly a quarter of respondents had entertained suicidal thoughts.

One in 10 respondents said this had occurred in the previous 12 months.

The report found that levels of psychological distress were significantly higher in the medical profession than in the rest of the population.

Whereas 2.6 per cent of the general population admitted to deep psychological distress, the proportion of doctors in that state was nearly one-third higher, at 3.4 per cent of the total.

Dr Choong-Siew Yong, acting director of the Doctors’ Health Advisory Service in New South Wales, says doctors have had higher suicide rates than the general population for many decades.

Dr Yong believes the profession attracts perfectionists. But he says other factors besides that affect medicos’ mental health.

He points out that many young doctors move long distances all over the country – away from family and friends – to complete their training.

They work on temporary contracts, and it can be hard for them to take leave because of training commitments, or simply because there is no one to replace them.

Shift work, overtime and on-call work are other factors: “If you work in emergency or trauma you can be called up at a moment’s notice … you can never quite relax.”

Dr Yong says an emergency doctor may be on call for 10 days out of every fortnight: “That means they work a normal day and then … they’re called back in the evening to emergency surgery.

“They could be there all night doing some emergency and then they have to turn around and be back there at 8am that day for their routine job.”

The NSW branch of the Australian Salaried Medical Officers Federation is considering a class action against the NSW Government for unpaid overtime.

Doctors are not generally considered vulnerable. But, according to Dr Allen, it is common practice to take advantage of “unaccredited registrars”.

Unaccredited registrars are qualified doctors who work in a hospital but are not in a formal specialist training program overseen by a medical college.

They don’t get the same protections – such as quarantined hours when they cannot be called on for clinical work – or the same professional development that an accredited trainee gets.

Generally employed on temporary contracts, an unaccredited trainee may languish permanently at that level unless they can secure a coveted traineeship position.
To do that, they need experience and positive references, which, according to Dr Allen, is why they can’t say no to assignment at short notice and are reluctant to complain. Dr Choong-Siew Yong, acting director of the Doctors’ Health Advisory Service in New South Wales, says doctors have had higher suicide rates than the general population for many decades. The profession attracts perfectionists, he says, and this is compounded by many other factors and demands.

That was the experience of Dr Yumiko Kadota, a promising young unaccredited surgical registrar who wrote publicly about the extreme occupational stresses she was under.

Dr Kadota wrote of being on call for 120 to 140 hours a fortnight, working up to 24 consecutive days and performing surgery while exhausted.

She resigned after crashing her car on the way home from work.

Dr Allen’s comment also evokes the sensational claim in 2015 by senior surgeon Dr Gabrielle McMullin that a female trainee doctor would have been better off giving her supervisor a blow job than making a sexual harassment complaint.

A culture of silence pervades the medical community. An unaccredited trainee surgeon working in a large Melbourne hospital backed out of participating in this story because she feared the repercussions it might have on her career.

So what does a doctor struggling with a mental illness do?

“Ideally they would seek help,” says Dr Yong. But it’s not that straightforward.

As a result, admits Dr Yong, a doctor who seeks treatment for a mental illness could potentially be reported by their treater.

Mandatory reports are rare and practising with a condition is not necessarily an issue.

But according to Dr Allen there remains the problem of perception, of doctors delaying treatment because they are scared of being reported.

Dr Allen is unusually candid about his experience and condition. But he admits that he only became open about it after it was safe to do so.

He now has the confidence to say this:  “The health system … needs to acknowledge that working their junior doctors to within an inch of their lives and training them in a way that is harmful is causative of doctor suicide and doctor burnout.”

St Vincent’s Hospital, Melbourne, provided this policy excerpt: “Every person who works at [St Vincents] …  has a right to work in a safe and supportive environment that is free from discrimination, harassment, bullying, victimisation and vilification.

“Consistent with its mission and values, SVHM is committed to providing such an environment where people treat each other with dignity, courtesy and respect, resulting in improved employee wellbeing and productivity.”

The first Friday in June is Crazy Socks for Docs day, which kicks off a week of advocacy and focus on issues of mental health in the medical profession. Find more on the initiative here. If this issue raises concerns or distress, help is available: Beyond Blue: 1300 22 4636; Lifeline Australia: 13 11 14; Kids Helpline: 1800 55 1800