Behind the headlines: Contemplating journalism in a post-Fairfax world

The Nine/Fairfax Media deal recognises the cruel realities of the news business in the internet age, experts told a Melbourne media panel. They see more trouble ahead for journalism, more rude shocks in media control, and a few glimmers of light. 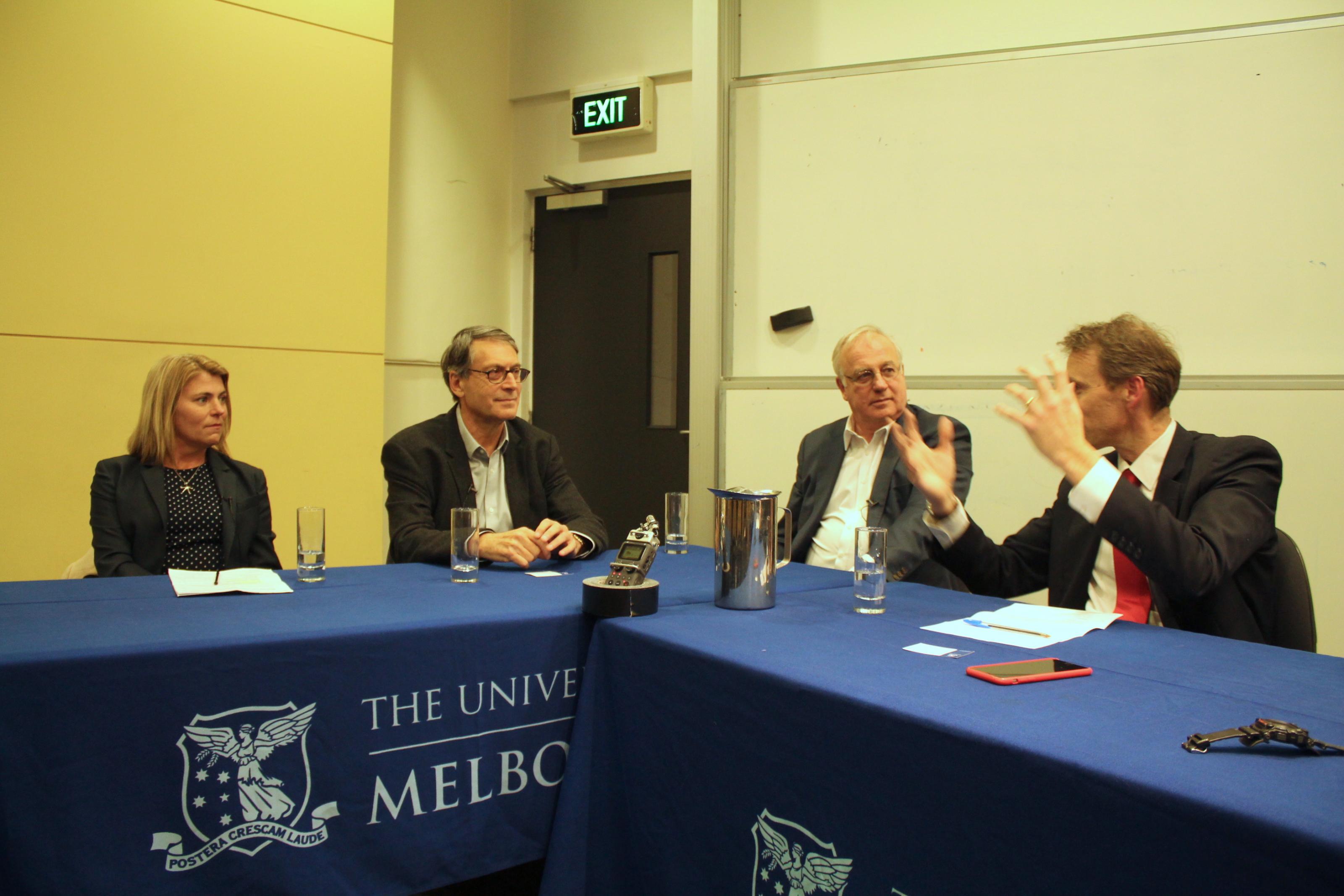 Award-winning financial journalist and former Age editor, Alan Kohler, began his working life as a newspaper delivery boy. “Virtually everyone had a newspaper. And they all read it. Now, everyone’s too busy doing other stuff,” Kohler observed in sketching out the challenges of the international media landscape for a discussion convened by the Centre for Advancing Journalism this week.

He highlighted the torrents of free content now available to audiences as a key dynamic in the shifts that have weakened and toppled old media. The panel came to discuss the proposed merger, or “takeover” as three of the four panelists characterised it, of Fairfax Media by the Nine network and the consequences of that for journalism.

The discussion took place on the eve of the release of Fairfax Media’s full year report yesterday, which revealed a 13 per cent decline in print revenue. This is would not have surprised any of the panellists, who agreed the end of print was “inevitable” and the Nine Fairfax merger was “predictable”.

“Economically, it makes sense,” said Stephen Mayne, shareholder activist and journalist, and the panellist who reserved judgement on whether to characterise the deal as a takeover.

“They [Fairfax] had nowhere else to go,” said Eric Beecher, another former Fairfax editor and chairman of Private Media, publisher of Crikey.

“You’ve got two legacy media organisations who need to build capital, get more reach and this is the consolidation occurring across developed countries,” said Andrea Carson, media expert at LaTrobe University.

In what’s been described as the biggest shake up of the Australian media in decades, the $4 billion deal scraps the Fairfax name to create “Nine”, a media organisation second in size and impact only to News Corp.

“A lot of people are mourning the loss of the Fairfax name. Personally I don’t think that’s a big loss,” Kohler said. He argued that the more important question was about the survival of the Fairfax culture.

All panellists agreed that the cultures of Nine and Fairfax were “incompatible”, and much of the discussion was preoccupied with what this would mean for the standard and scope of journalism published by the Fairfax newsrooms.

Carson said the “victims” of the deal would regional newspapers, which Nine has indicated it has little interest in. She also raised concerns about the future of Fairfax’s investigative journalism, which has remained strong despite more than a decade of cuts to the newsroom, predicting an end to collaborations such as last year’s Walkley Award winning ABC-Fairfax Four Corners investigation that exposed the exploitation of nursing home residents.

“That is the expensive type of journalism that requires commitment, it requires having editors who are committed to litigation, if that is the case, and Nine doesn’t have that history with investigative journalism – at least not this century,” said Carson.

“My consumption, my exposure to A Current Affair is through Media Watch, which is about all I can take. I mean, it seems bad,” said Kohler. “It seems like they don’t care about the truth much.”

Mayne said the question of the journalism culture in the proposed new mega-publishing operation would be determined by the makeup of the board, and that turned on who is elected to the board of directors, which is still unknown.

“If they just put [former Liberal politician and Howard Government treasurer] Peter Costello on there – who hates Fairfax – and a bunch of toe cutters, yes it’s terrible for the future culture of investigative journalism.”

Mayne outlined an even more challenging scenario for Australian journalism, predicting that an “opportunistic” billionaire, like Gina Rinehart, Clive Palmer or Frank Lowy, would buy a 20 per cent share in the merged enterprise and become CEO.

“I think it’s a monty for the Russian oligarch-style ‘I want to get power back’,” Mayne said. Director of the Centre for Advancing Journalism and panel chair, Dr Andrew Dodd, remarked that these individuals were “not exactly great friends of journalism”.

Nonetheless, Mayne argued that it wasn’t inevitable that the Fairfax culture would vanish. He cited the survival of the shock-jock culture of Sydney radio station 2GB, which remained unchanged after Fairfax took it over in 2015. “Alan Jones and Ray Hadley are total non-Fairfax culture and they do totally the same thing after the takeover. Neil Mitchell, Tom Elliott, they’re not Fairfax culture.”

He added that he hoped that editorial independence would be safeguarded by the ACCC in its consideration of the proposed merger.

But the picture emerging from the discussion was largely a grim one for journalists, with the panellists agreeing the deal would result in “unsentimental” newspaper closures, job cuts and a reduction in low-profit journalism.

And while there were hopes that investment in investigative journalism, because of its potency in maintaining brand value, “public trust journalism, covering the courts, the rounds – that requires significant resources, and there’s no commercial payback for that,” said Eric Beecher.

The reality was that the proposed Fairfax-Nine deal “had very little to do with journalism … a deal like this is purely about business.

“It’s a public company, it’s owned by institutions. The directors have a fiduciary duty to deliver profits. They have no duty to journalism. Zero,” he said. “Their fiduciary duty on that board is to profitability of the shareholders, not the journalism.”

Explaining the commercial realities that have closed mastheads and hollowed out newsrooms around the world, Beecher said the business model for journalism “fell apart” when the internet “stole everything” including classified ads.

Looking to the future, Carson argued that digital newsrooms would likely adopt a “hybrid” business model, including native advertising (which might resemble traditional news editorial but was paid for to promote products), and digital subscriptions.

Fairfax’s digital subscriptions this year rose by nine per cent, which marks a steep decline from last year’s subscriptions growth of 21 per cent.

Kohler blamed the public’s unwillingness to pay for news for job losses. “If the world wants journalism, they’re going to have to pay for it. And at the moment, they’re not paying enough for it.”

Carson said that while the “great media oligopolies have been busted” by the internet disruption, it had also allowed new digital-only players into the landscape, from substantial players like The Guardian to more niche publications like Junkee or Mumbrella. Carson’s latest study examined six Australian digital only newsrooms and found that 80 per cent had experienced substantial growth in the past five years, resulting in the expansion of newsroom operations and more journalists being hired.

“People are hungry for news, if the old players give it up I think there could be some industrial types,” said Mayne.

Beecher talked in length about 10-year-old French privately-owned, subscription-funded  investigative website, Mediapart, that employs 100 journalists, is turning a profit and has been described has “pioneering” the digital-only media landscape.

“What it shows is that if you can in a sense reinvent journalism in a city, country, in those niches, I think there’s hope. But it’s got to be based on a business model,” said Beecher.

Mayne said he was “optimistic” for the future, that investigative journalism had “never been better” and that that digital journalism was promising for democracy.

“Let’s talk about the access to data, access to information, democracy being better exposed through live streaming, through free data.”