An accidental discovery of a namesake on a gravestone in Melbourne General Cemetery sent Jess Cockerill diving into the pages of history, providing some journalistic inspiration, if not a neat resolution, to a family mystery.

In June 2017, I packed up my life in Perth and moved to Melbourne.

As far as I knew, five generations of Cockerills had lived and died in Perth. So when taking a shortcut through Melbourne General Cemetery one grey afternoon, I was surprised to stumble across a stately plot dedicated to a family of Cockerills. It’s not a common name.

The grave was austere but by no means humble, with solid lines and a hint of art deco embellishment. Gold lettering illuminated the polished red and grey marble slabs, listing the family names across two headstones: on the left, Mary Ellen Cockerill and John Edward Cockerill; on the right, Kathleen Bernadette, George Cockerill and Margaret Mary Kavanagh. 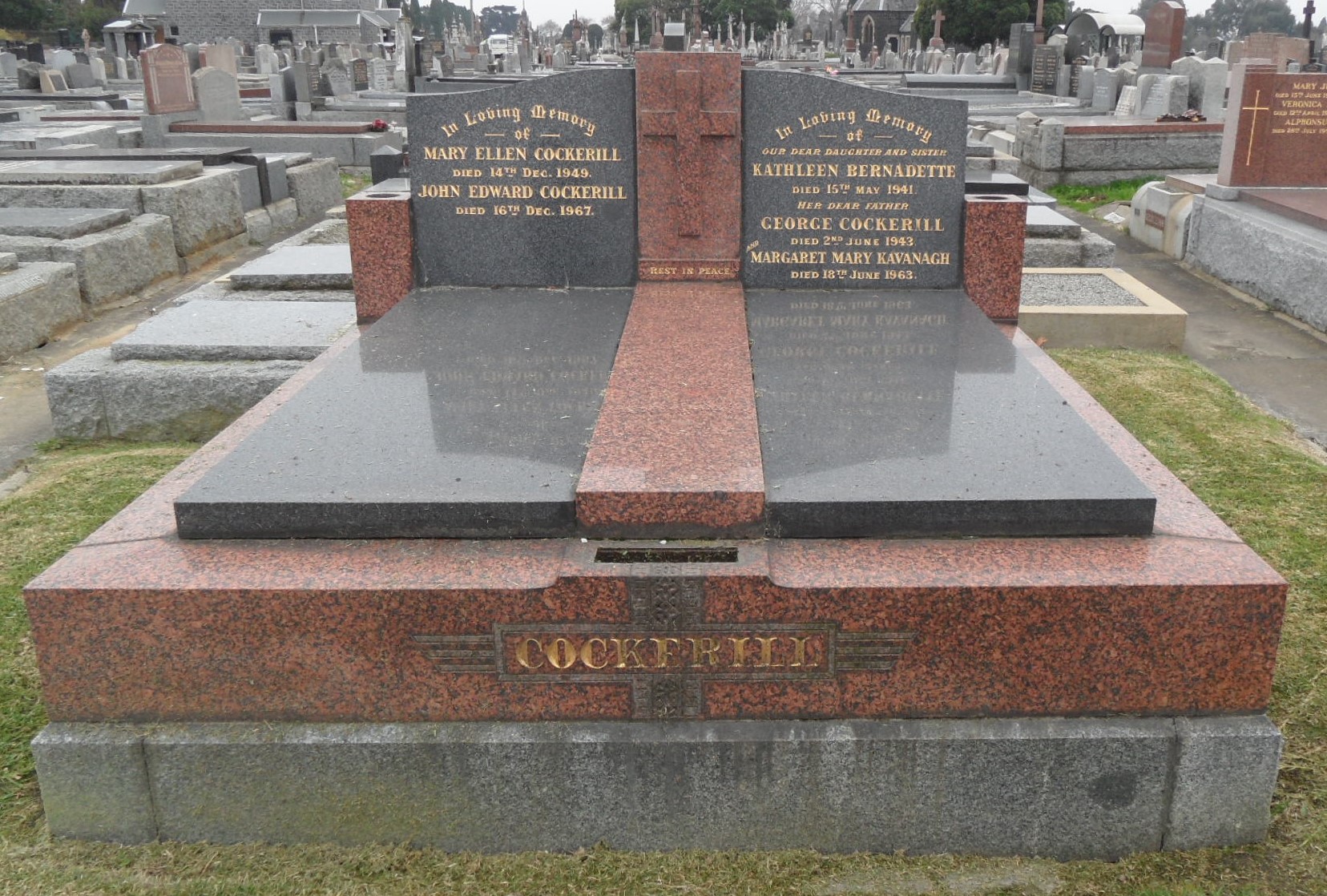 This was the first I’d heard of Cockerills living – and dying – in Melbourne, let alone occupying such a prominent space in this historic graveyard, not far from recognisable Melbourne establishment names like Scullin and Tobin. It emerged that the prime location was primarily in George Cockerill’s honour.

He was a notable journalist during Federation. With a nickname like “The Thunderer”, given by politicians to him, one can begin to imagine his fervour as a writer. He was one of the first to sit in the press gallery of the new nation. He was married to Mary Ellen and father to Edward, Bernadette and Mary.

I was thrilled. Not only did I feel a little more connected to this city I was trying to make my new home, but maybe I had found that journalism – which I had come to Melbourne to study – ran in my blood? When I’d decided to pursue this career path I’d been met with well-meaning bafflement. Since nobody else in our immediate family had been a writer, my parents had no idea how to help me achieve my goals. They were supportive, but at a loss.

George Cockerill was born in 1871 in Bendigo, at the tail end of the town’s gold rush. A note in Perth’s Daily News in December 1906 notes that his father (also named George) arrived in 1851 at the first discovery of gold, but his son was not destined for mining or farm work. He started his career as a writer at the Bendigo Independent newspaper, and then became chief of staff at The Ballarat Star.

In 1898 he moved to Melbourne to work for The Age, where over his 28 years of work he saw Australia become a Federation, and moved through the ranks from staff reporter, to chief of staff, to political leader writer. In an obituary a day after George’s death in 1943, the newspaper celebrated not only his journalistic contributions to the masthead and the Federation campaign, but also his attitudes to life in Australia.

“Long-distance walking was one of his recreations, and he spent many a holiday, and penned many a sketch, amid the beauties of the Victorian bushland.”

The article also mentioned he sent cartoons to The Age’s Literary Supplement, but though I tried to find copies (I myself have “penned many a sketch”, and I hoped to compare styles) they were buried too deep in the archives for me to locate them.

The Argus (a legendary, long-gone Melbourne newspaper) also published an obituary, and gave details of George’s life post-Federation. In 1926 he moved to Sydney as editor of The Daily Telegraph, but returned to Melbourne two years later to become a leader writer on The Herald. He retired in 1938, five years before his death, and spent this time working on a memoir, Scribblers and Statesmen, which was not published until after his death. He had written many other books, both fiction and non-fiction.

Was there a family link? A phone call home got my own father excited about the hunt. These Melbourne Cockerills shared an unusual family trait with the Perth Cockerills – a tradition of going by their second names. My father’s full name is Russell Vaughan Bartram Cockerill, but he always goes by Vaughan.

Melbourne journalist George Cockerill’s named his two sons John, but it seemed unlikely he and Mary would’ve referred to the two boys in this way. George’s daughter Bernadette also followed the same naming pattern: all her records (including an obituary) refer to her by this second name, not her first, Kathleen. Perhaps, I thought, this was a hint at some degree of relation.

My father had a family tree from my grandfather hand-written on butcher paper: at the top of the page was one George Cockerill.

But my great-great grandfather had married a woman called Rose, while George in Melbourne had married Mary. According to a note from my own grandfather, Perth’s George Cockerill arrived in Australia in 1914, after the Melbourne journalist’s father arrived. It seemed the link must trace further back, to England, with the Perth branch of Cockerills a slightly newer group than the Victorian ones. It was not the right George.

I was disappointed, but not put off. George “The Thunderer” Cockerill would not have been put off. I fancy, from what I’ve learned of him, that he’d ride the story through to the end – keep pushing back through the generations, to England or further – and maybe I will too someday.

But it’s nice to know that if I ever do find myself in the press gallery, or the offices of The Age or Herald Sun or Daily Telegraph, I might be in the company of a friendly, familial ghost.