Protecting the environment can occur in the muddiest places, as volunteers are proving at Grantville. This report by Rosalee Kiely continues our series ‘Going Under’, exploring the impacts of sea level rise on the Victorian coast. 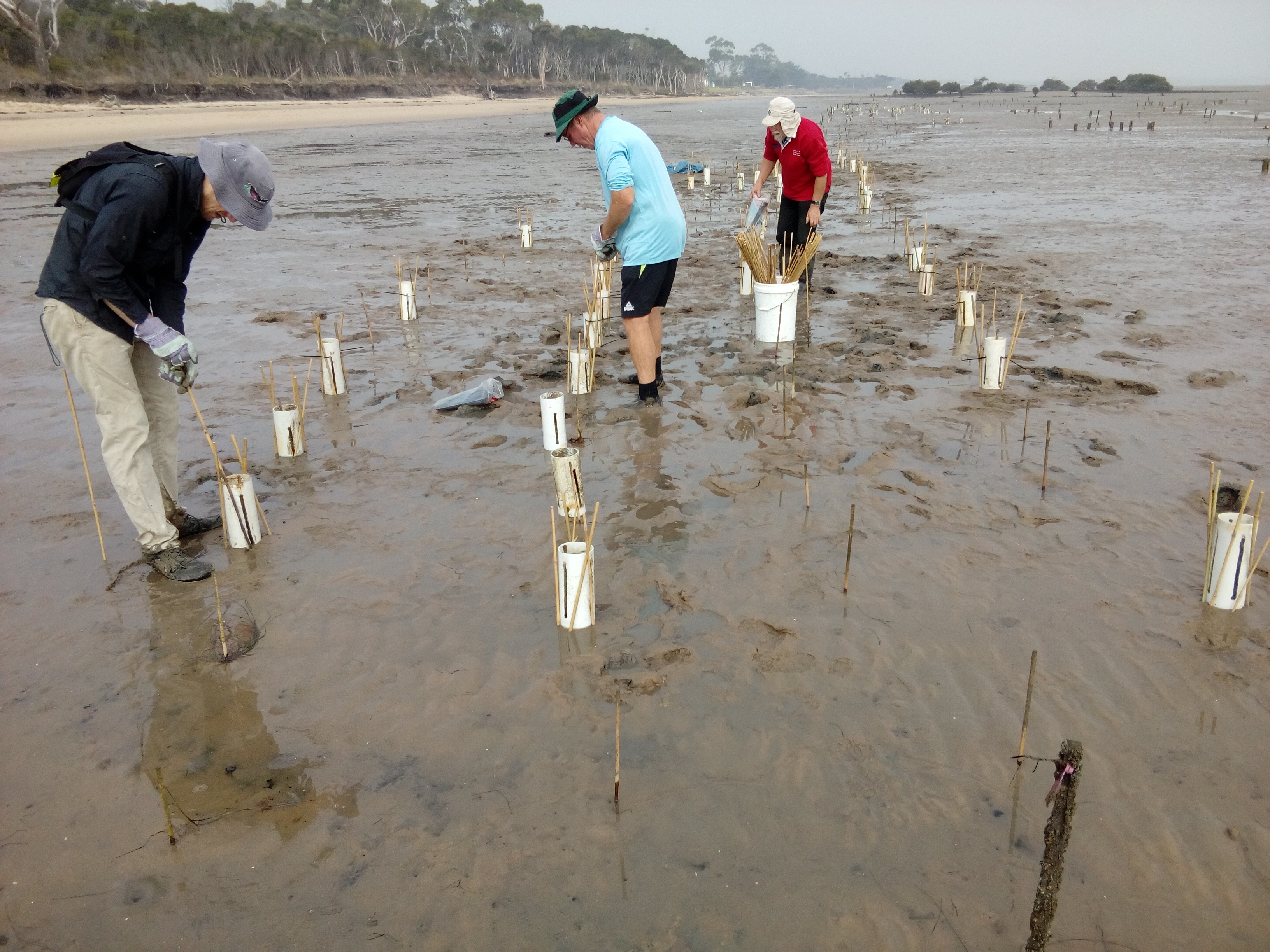 How are you doing? Volunteers check on the seedlings at Grantville mudflats.

It’s a Sunday morning in a too-mild Victorian autumn, and marine ecologist Greg Parry is out on the mud flats at Grantville, just off the Bass Highway in Western Port, squelching in his gumboots through a thin film of muddy water to count mangrove seedlings.

He’s taking part in an experiment run by the Western Port Seagrass Partnership, an organisation dedicated to protecting and restoring the Western Port environment, which saw 400 sprouted mangrove seeds planted at Grantville in January. Now, a handful of volunteers, mostly older people with marine backgrounds, are back to see how the plants are doing. The tide is way out, and cloud covers the channel across to French Island.

There are four plots, each planted with 100 seeds. In two plots the group use cable ties to secure an upright PVC piping offcut to bamboo sticks around each surviving seedling, while plants in the other plots are left to fend for themselves. Dick Cox, former Port of Hastings harbourmaster, whizzes along the sand in a beach buggy with the materials. Hopefully, given all the messing about required to stake and support the seedlings, the plants without the PVC piping will show the better long-term survival rates.

They are foot soldiers in the growing ranks of citizen scientists. Their ambition is to find the optimum method of cultivating mangroves on mudflats, in the hope that “rejuvenating” the intertidal tree will slow coastal erosion in Western Port — a problem set to get more pressing as sea levels rise with climate change.

According to a report released by Melbourne Water in 2017, Planning for Sea Level Rise Guidelines, Western Port could see inundation flood heights of between 2.9 metres at the southern end of the bay and four metres at the north eastern shore by 2100 — compared with 2.1 metres and 3.3 metres respectively now; Bass Council predicts that sea levels will rise by up to 0.49 metres in the bay by 2070. Rising sea levels mean that weaker storms will have a greater impact.

Already, the low-cliffed shoreline at Grantville erodes at a rate of up to 0.7 m each year. And the solution to holding back the tide could be mangroves.

Mangroves, the name given to any number of species that grow in the salty or brackish water along coasts, are thought to rehabilitate coastal erosion because their shallow, spreading root system not only stops mud from lifting up when a wave passes, but accretes, or builds, sediment; a mangrove forest also “slows down” waves, acting as a buffer between the sea and the land.

Victoria has just one species of mangrove, known as the White Mangrove (Avicennia marina), which once surrounded most of Western Port in 200-metre wide forests that were depended upon by Aboriginal people, and remain an important shelter for many kinds of fish, and some migratory birds. Numbers have disappeared since European settlement for different reasons, such as flow-on effects from draining the Koo Wee Rup swamp, clearing for beach access, and to make ash, known as “barilla,” for soap production in the days of early-Melbourne.

But interest in replanting mangroves as a form of coastal protection is mounting, with the Department of Environment, Land, Water and Planning releasing a draft report in 2017 outlining a plan to “block plant” mangroves at Grantville over the next three to five years.

Despite this, Ian Stevenson, environmental scientist and chair of the Seagrass Partnership, which co-ordinates all boots-on-the-ground planting in Western Port, last year attended the Australian Mangrove and Saltmarsh Network conference in Sydney, and was surprised that little work was being done on methods of planting mangroves in southern Australia.

“We seem to be the only ones doing this,” Stevenson said.

The Western Port Seagrass Partnership was formed in 2001 by Professor John Swan, John Barnard, QC, and comedian and conservationist John Clarke, together with Dr Peter Attiwill to tackle seagrass loss in Western Port. During the late 1970s and early 1980s, about 70 per cent of seagrass in the bay was lost, due to, it was believed, excessive sedimentation.

Stevenson says that when initial attempts to grow seagrass didn’t work, the group turned to mangroves as a natural method of stabilising the coast, reducing sediment and restoring the bay environment.

Scientist Dr Tim Ealey, who later joined the Seagrass Partnership Board, engaged a small army of schoolchildren to grow and plant mangroves, earning himself the moniker Dr Mangrove, as well as an Order of Australia, and designation as a National Treasure, along the way. Over many years his work has evolved the techniques the Seagrass Partnership continues to trial. The beach buggy is referred to by its name “Tim”.

Confronted with coastal erosion, communities often consider hard structures like rock walls or groynes, seaward-extending structures that check erosion, but these are both “expensive and bad for the environment,” according to a team from Melbourne University researching natural coastal defences. Mangroves are low-cost and can also migrate if sea levels rise slowly enough, and the plants are not squeezed by development on the landward side.

Roger Hayhurst, a resident and member of the Grantville and District Foreshore Committee, lives in a waterfront property and has joined the Seagrass Partnership out on the mudflats. Coastal erosion is “absolutely on people’s radar,” in Grantville, he says, particularly surrounding the two or three days each year when “all the ducks are in line” and a few windy days are coupled with high tides, causing waves to come into the foreshore vegetation, and washing a few trees and soil away.

While Rogers thinks that mangroves are “clearly the best long-term solution” to help prevent erosion — sections of coast with mangroves growing in front are visibly less eroded — other methods such as rock walls or groynes will need to be considered for the 20 or so years it takes the plants to mature, he says, because “in that time we’ll have seawater in people’s backyards”.

The department announced in September that following consultation with the community, plans are going ahead to plant mangroves in parts of the intertidal zone in the northern area of Grantville. Timber groynes will be built in the southern area near the higher use Recreation Reserve. Grantville is one of three research sites selected for the University of Melbourne’s Nature-Based Coastal Defences project, of which the Seagrass Partnership is a partner to a grant funded by the department that will look at “new and innovative” techniques to increase the survival rates of mangroves.

Not everyone wants mangroves growing at Grantville. Bass Council spokeswoman Geraldine Archibald said that some community members expressed concern during consultation over the potential reduction of access to the waters of Western Port for recreation, which the council will tackle by inserting 10-metre gaps in plantings.

There are also concerns that mangroves bring mosquitoes, are smelly and block the view of the water, affecting real estate prices.

Passions over mangroves can run deep. “People literally go out in the middle of the night in kayaks to pull out mangroves,” says Kat Cox, a friend of the foreshore committee.

Cox has held various views about them, but she changed her mind when she had her daughters and started to think about their future. Now, she says, her view is “plant them, plant them”.

“No-one wants to see someone lose their house or part of their land to coastal erosion,” Cox says, and ultimately, as far as mitigation goes, mangroves are “all they are offering us”.

Their maintenance done for the day, and the sky now a brilliant blue, the volunteers take a walk along the beach towards Pioneer Bay, looking for errant PVC piping to pull above to waterline. They pass the ruins of a sea wall, and the markers of earlier mangrove plantings: bamboo sticks and PVC piping lodged in the mud, and disappointingly few surviving mangroves in these particular plots. It is too soon to tell how January’s plantings will fare, and if the PVC piping will aid survival.

At the end of the beach, at the point, they find a forest of mangroves that has rejuvenated of its own accord. They are quietly elated to see the mangroves flourishing, and slowly regenerating along the coast towards the Grantville township. A forest like this, Stevenson muses, is what the Seagrass Partnership is trying to achieve. 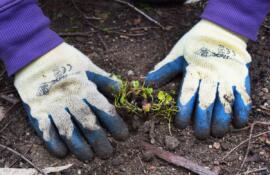 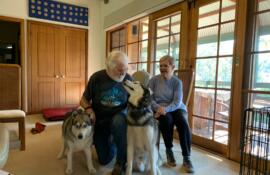